Sometimes the pretty girl smiles back at you, sometimes it starts raining just as you arrive back, and sometimes the break stays away! Yes, today at the Tour Down Under was one for the dreamers, as Australian cyclist of the year Cameron Meyer took the stage and the leader’s jersey after a well-executed attack in Stage Four.

Today was not that hard for the pros, but for us non-pro’s the 135km Sportif was hard.

For us in the team Broken Spokes (I am using the word ‘team’ loosely, as we are 12 lads who are more a collection of friends, two of them my brothers and friends of friends), it was an early start 4:30am, we crossed the start line at 5:40am. We were riding the stage ahead of the pros, and we wanted to be sure we were at Strathalbyn in plenty of time. The pros were starting at 11am. 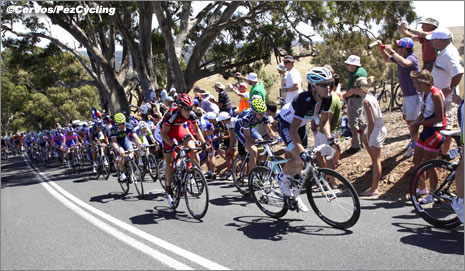 Everyone was on time and away we went, expecting a day of 28 degrees, with a possible head wind for a majority of the distance. The first challenge was the King of the Mountain at 38km’s that soon broke up the team. After that, Broken Spokes started to splinter, as we all started to find our own rhythm and cling on to passing trains of the 7000 plus participants in the Days Mutual Community Challenge. This is one great event to attend. We had cakes and refuelled at the 70km mark, time to make a push for the finish.

Finally we reached a downhill stretch, about a 3% grade for nearly 15km, I clung to a group, and we were flying at 42-45km/hr into a head wind/breeze. A downhill run for the last 10kms, I flew for the last 10km with the tail breeze, 5km, 3km into Strathalbyn, two turns and I dropped the group I had been with at 600m….300m up out of the saddle and cramped, oh well, I will cruise from here and get settled to watch the real race. 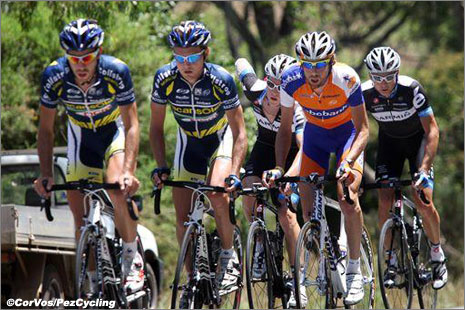 As per the script of the first 3 days, a group of 5 got away, and they kept away taking the King of the Mountain (I hope they suffered up checkers like I did, probably not) and sprint points. The break away comprised Cameron MEYER (AUS) &, Matthew WILSON (AUS) – GARMIN-CERVELO, Laurens ten DAM (NED) – RABOBANK, Blel KADRI (FRA) – AG2R, Rob RUIJGH (NED) & Thomas de GENDT (BEL) – VACANSOLEIL DCM PRO CYCLING TEAM. The time gap was out to 2:30 at one point. We expected them to get caught. 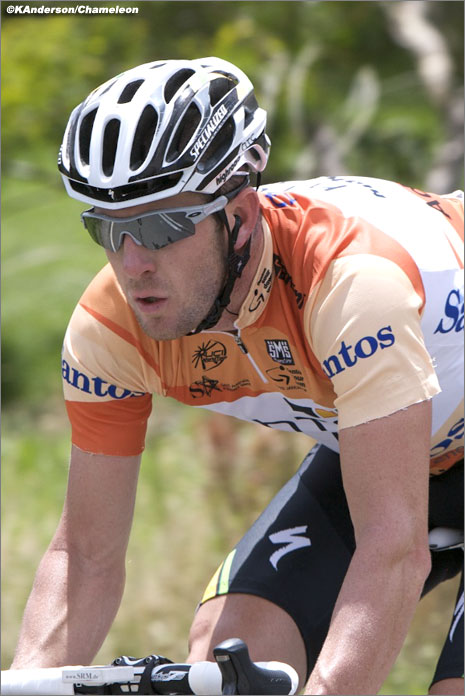 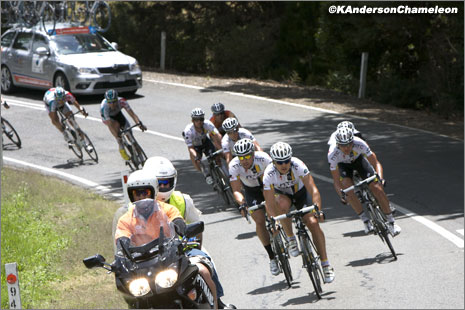 The chase behind was a bit disorganised and at 10km to go and the gap was 1min, then it stayed there, I knew the finish was fast…this is going to be close, 5km and 30 seconds. Everyone was flying, the peloton and the breakaway, all working together then; the final straight the break away was going to stay away! A sprinters race was going to be split wide open by a breakaway. 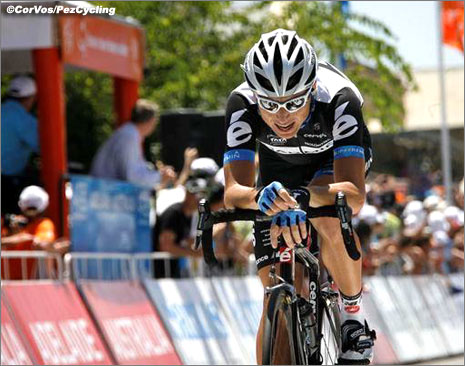 Wilson sacrificed himself for team mate Australian, Meyer, de Gendt and Meyer sprinted for the line, Meyer took the honours for Stage 4. How big was the gap… 20 seconds to the peloton. Meyer was in the Ochre jersey! He has 3 seconds on ten Dam (Rabobank) and 12 seconds on Matt Goss. 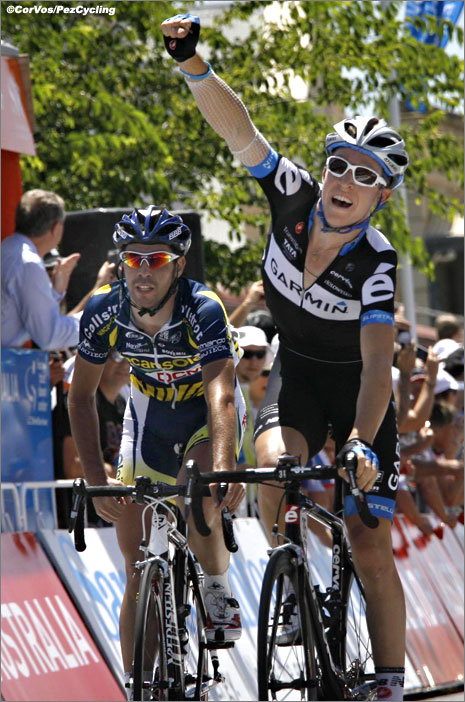 Two stages to go. Willunga Hill twice tomorrow and the TDU is showcasing fantastic racing. Can HTC get some time back to help Goss? Sky are going to work hard for each other, Sky have shown they have depth and versatility with their team moves in this year TDU, what is next for them … an Ochre jersey?
And the winner’s average speed…42.1km/hr, that’s why they are pros and I am an engineer…

Tomorrow’s Stage is 131km McLaren Vale to Willunga. This is my favourite stage of the TDU, two ascents of Willunga Hill, spectacular sea and vines viewing.

Beer Of The Day
James Boags Premium Lager, which has been voted the world’s best beer in Europe! It’s from a small brewery near Richie Porte’s home town in Tasmania Launceston, with a clean malty taste with a feel of hops. I am having a steak with my Boags tonight … I have earned it.