As always stage 5 of the Tour Down Under promised to be the decisive stage, with 2 ascents of Willunga Hill. Willunga Hill never disappoints, and on Saturday, it lived up to its reputation once again. Read on!

With the climb topping out with under 20km to race, aggressive and exciting racing is guaranteed. Garmin-Cervelo’s Cameron Meyer went into the stage with a 10 second advantage over his breakaway compatriot Laurens ten Dam and more importantly, 12 seconds over Matthew Goss. With a 10 second time bonus up for grabs for a stage victory, Goss’ sprinting form could see him take the overall victory with time bonuses. If I were Cameron Meyer I would want to go into the final stage with my 12-second advantage intact. So how would the stage play out, and more importantly which riders would grab the valuable time bonuses? 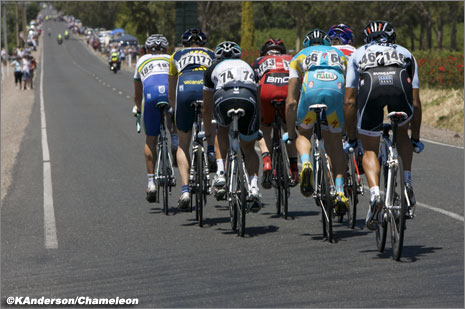 As expected, the early break slipped away in the opening kilometres. Eight riders formed the group, Michael Hepburn (UNI SA), David Vigano (Leopard – Trek), Juan Horrach and Denis Galimzyanov (Katusha), Joost van Leijen (Vacansoleil), Joe Murphy (BMC Racing), Tanel Kangert (Astana) and Sebastian Haedo (Saxo Bank Sungard). The escape hovered at around 2 minutes ahead of a Garmin-Cervelo and HTC-Highroad controlled peloton. The break picked up both of the small time bonuses, which played into the hands of Garmin-Cervelo plan. 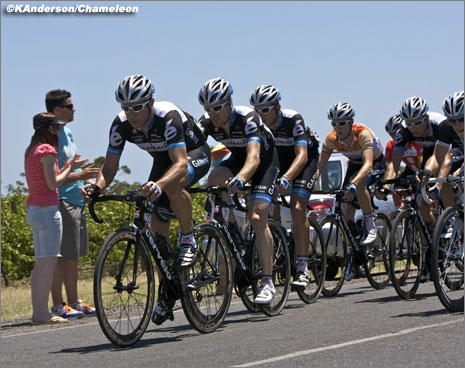 Garmin-Cervelo was in command at the front of the race.

As the race approached Willunga Hill for the first time both Mark Cavendish and Tyler Farrar were seen at the front of the peloton assisting the chase. With their catch imminent, 3 riders from the early break slipped off the front. Their escape didn’t last much longer as the orange colours of Euskaltel-Euskadi set a blistering tempo up the climb, riding for their man Gorka Izagirre. As they reach the summit, KOM leader and local hero Luke Roberts, launched a massive attack to claim maximum points. 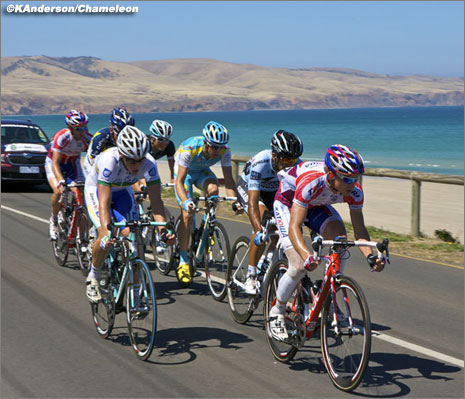 A smaller version of the early break, ready to be swallowed up.

Over the top of the climb, the group relaxed to take stock of the situation. This provided the chance for 7 riders to slip of the front of the race. With names like Armstrong, Ivanov and Gutierriz present, they had the firepower to succeed but also prove a threat to the script. Sky, Garmin-Cervelo and HTC had the race back together by the bottom of the descent. 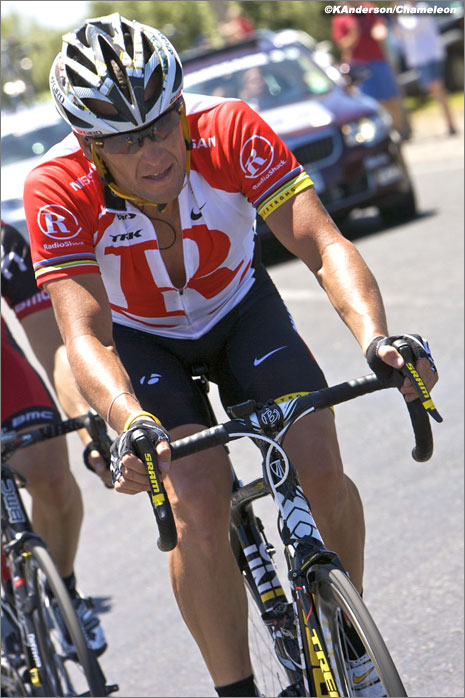 As the race approached the climb of Willunga Hill for the last time, Rabobank took control. Graeme Brown showed his former pursuit strength as he led the race through Willunga. On the lower slopes, Peter Weening took over from his teammate to set a high tempo. Like the previous lap Minguez of Euskaltel-Euskadi tried to up the tempo, at this point Richie Porte, Ben Hermans and Jack Bobridge opened up an advantage. Behind it was Mick Rogers who led the chase on the climb. Hermans took full points at the KOM to elevate himself to 2nd in the KOM standings.

On the plateau, Porte and Hermans swapped off while Bobridge played the policeman never taking a turn. As the riders made their way onto the descent Hadyen Roulston bridge to the 3 leaders with Matt Goss in tow. For a moment 5 riders were off the front of the race. Sky and Garmin-Cervelo never looked under pressure as the closed the gap down.

With 10km remaining, a group of 20 riders were at the front of the race. Most of the favourites were present, Meyer, ten Dam, Goss, Matthews, Swift, Ballan, Kadri and Ventosso. As I started to think about Bobridge jumping off the front to take the stage victory and precious time bonus, BANG he was on the deck crashing with David Lopez on a 90 degree left hand corner. 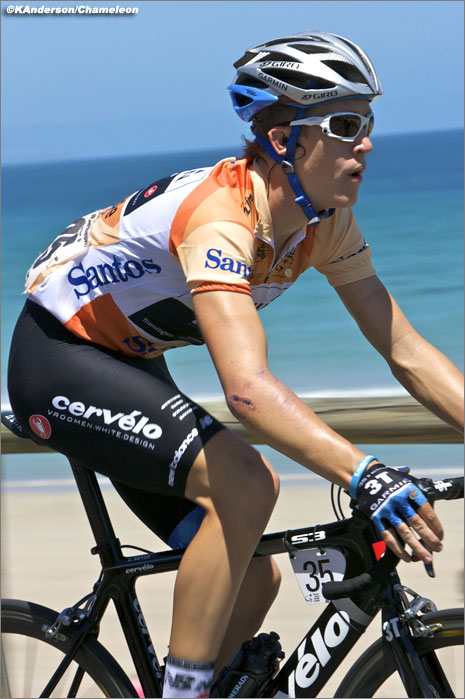 Cameron Meyer defended his jersey admirably. He’ll have to hope that Goss and Matthews are held at bay on the final day though.

With the lead group down to 18, the TV camera panned back to see the Greipel and Davis chase group in the distance and closing fast. Simon Gerrans buried himself for the cause of Ben Swift. The Greipel group was getting closer and closer when Euskaltel-Euskadi Izagirre jumped off the front of the race. The sprint opened up, Movistar’s Francisco Ventoso went down the middle with Michael Matthews on this wheel and Goss on the barriers. Matthews made his move but it was Ventoso who took the victory by centimetres in the throw to the line. Importantly for Cameron Meyer’s, Goss finished 3rd, only taking a 4 second time bonus. 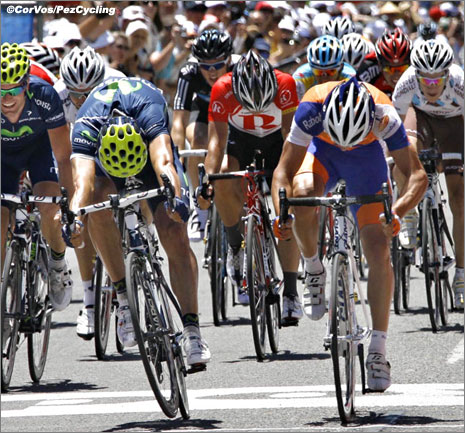 Ventoso by the tiniest of margins!

As we go into the final stage, the race is not yet decided. If Matthew Goss were to take the stage victory he could claim the overall victory. This has happened before with Stuart O’Grady taking victory by virtue of time bonuses. Sunday’s street circuit around Adelaide will prove again to be an exciting finale at the Tour Down Under.