The Journeyman’s Tale: From Berlin To Copenhagen

German motorways always seem much darker than British ones when you drive them during the night. But maybe it’s because it’s usually in the midst of some mad dash from one six day race to another. Ed Hood takes a middle of the night look back at the Berlin Six, as the six circus travels to Copenhagen.

Take tonight’s jaunt – the clock says 02:19 Wednesday and we’re in transit from Berlin in central Germany to Rostock on the Baltic coast to catch the ferry across to Gedser in Denmark – and the Copenhagen six day. 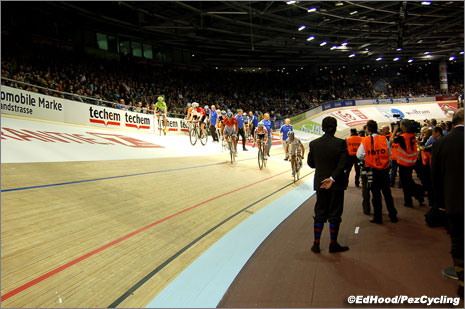 The race finished around midnight but by the time we broke camp, loaded the camper and waited on Alex Rasmussen to emerge from the doping control it was into the early hours. 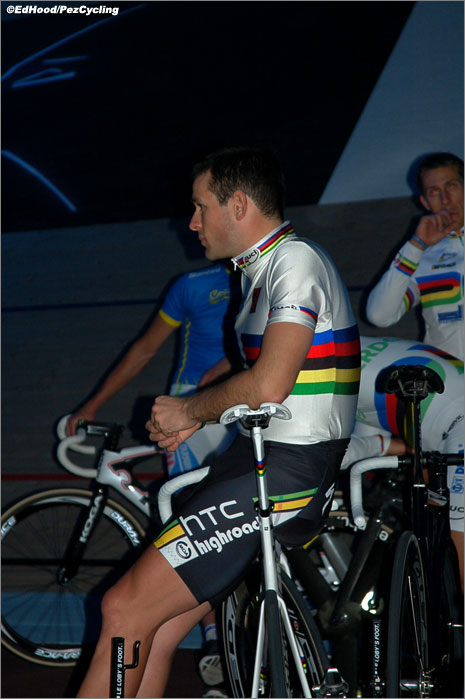 Dirk the mechanic is on our tail, in his camper, the outside air temperature is minus 2.5 and there’s snow blowing through. 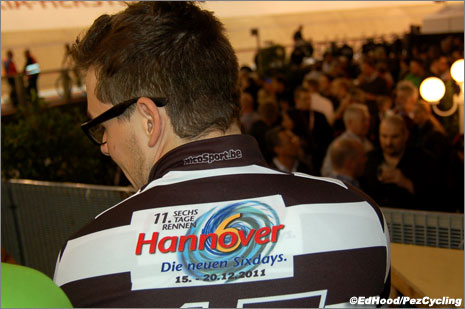 When I was a youngster and used to go to the six days in Gent and London, I would look at the soigneurs and runners and think; ‘that must be the coolest job in the world!’

Of course, I didn’t know about the sleep deprivation part of the job, back then.

I was only working at the last two nights of this race – it was easier for flights to go to Berlin and it also meant that I was there to help with the loading on the last night. Not that it worked out that way, but never mind.

‘And what about the damn six day?’ I hear you ask.

It’s not yet seven but the ‘full house’ sign is up. 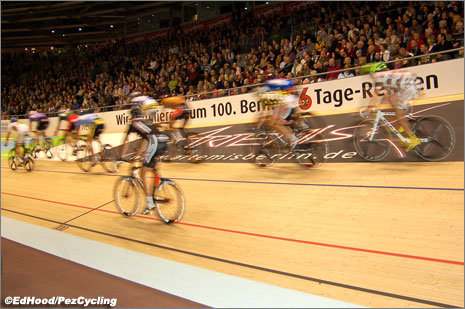 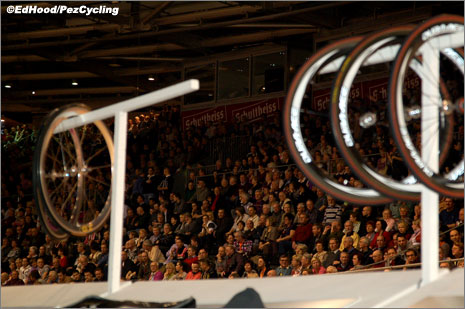 The spots swivel, regal organ music grinds out of the PA, the speaker ‘bigs up’ the European and world champions who are present, the cutie dancers wave to the crowd, the sausage sellers are turning those foot long jobs on the grill – with all that Schultheiss beer going down it won’t be long ’til the ‘munchies’ kick in and those sausages will fly over the counter – welcome to the finalй of the 100th Berliner Sechstage. 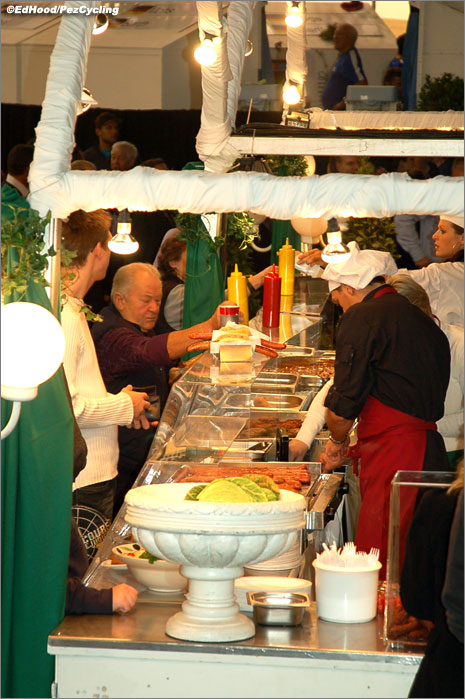 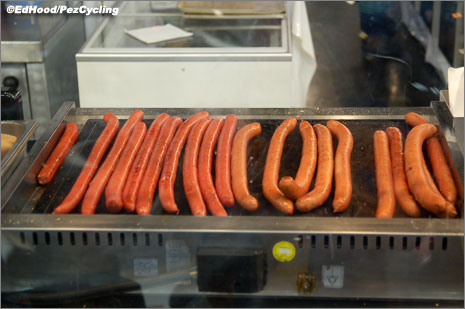 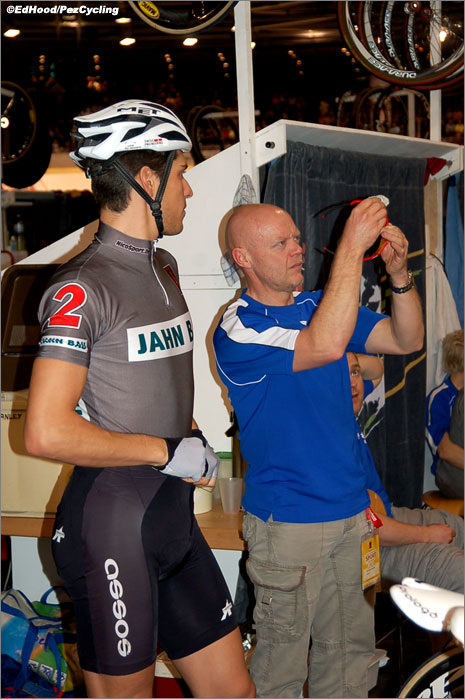 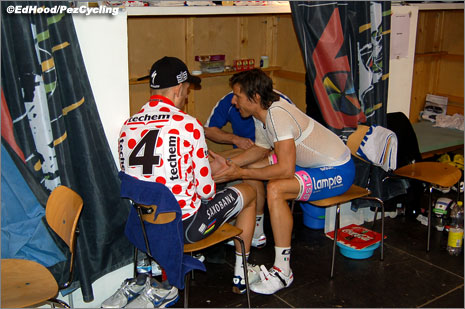 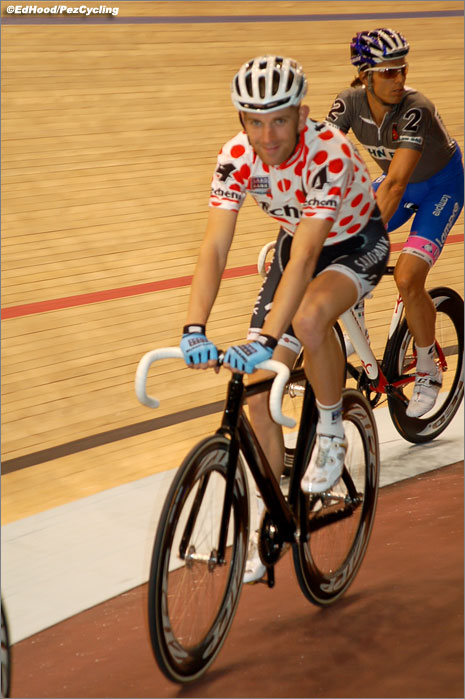 Difficult to call, The Potsdam Bear (that’s Big Bob’s handle – funny, he looks too young to me to have had a Citizens’ Band radio, but never mind) always wants to win. 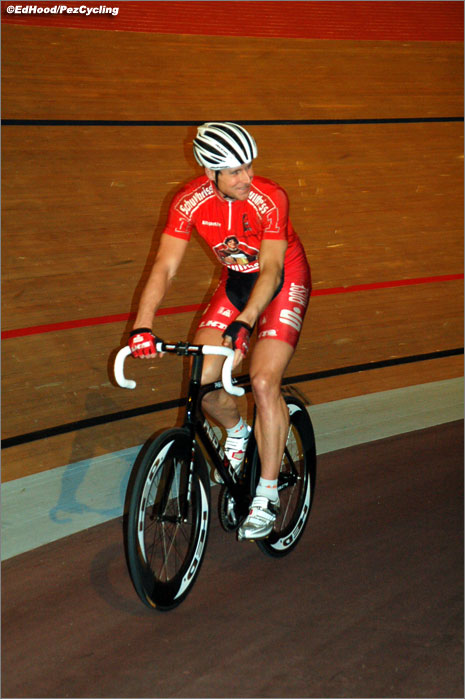 But all the more so in his country’s capital city – and Big Roger Kluge is a strong boy.

Alex and Michael are hot off Saxo and HTC camps respectively and all things considered (by me, anyway)are worth the win. 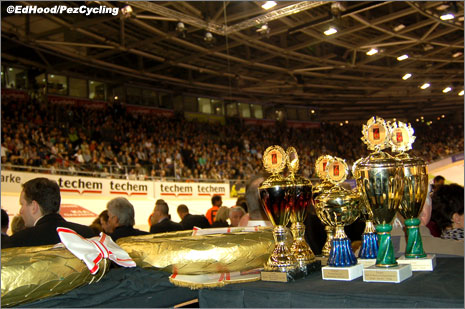 But it’s never that simple in the six days and there are geo-political issues to consider.

Franco and ‘coolest man in the stadium,’ Danilo Hondo might make the podium but won’t beat the Germans or the Aussies.

And whilst Cameron Meyer has just won the Tour Down Under, the road is one thing, the track is another and the six days are something else again. 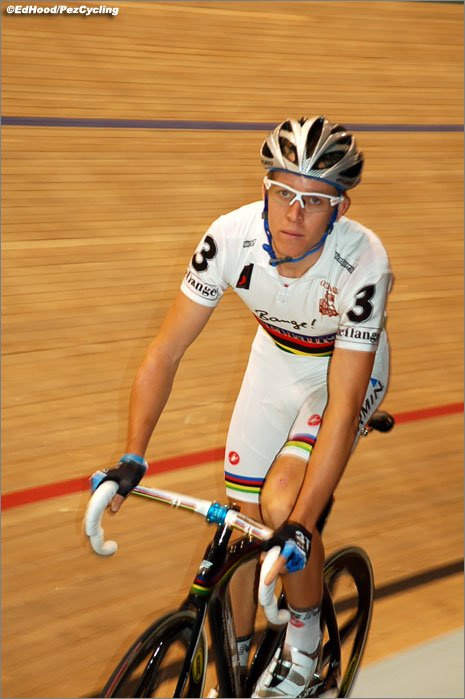 Whilst gears on the road and track get ever higher, six day gearing hasn’t kept pace.

A roadman can go more or less straight from a road programme into a World Cup points race or madison. The duration is a maximum of one hour and he can ride gears that would have been unthinkable on the track, just a few years ago.

But the sixes are different; the small, steep banked tracks, not to mention the lengthy and hugely varied nature of the programme require flexibility.

Bigger gears can be used for a rider to ease himself into ‘finding his track legs’ but only for a few days – any more and his legs will be wasted.

Howard – and his triple world champion countryman, Meyer cannot grab laps when they feel like it. 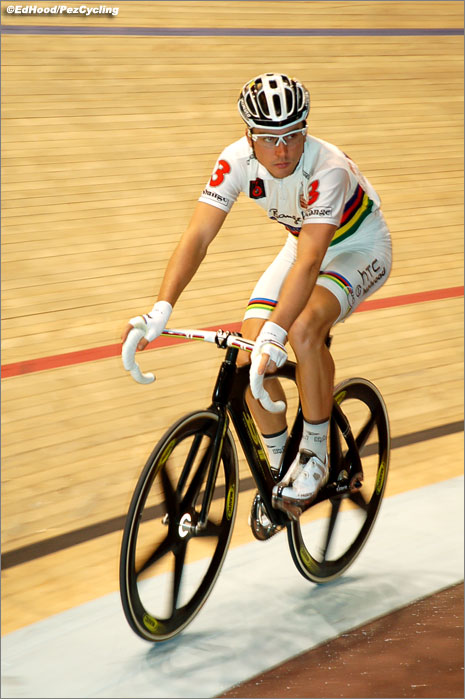 Not in this arena or against this opposition.

The Aussies haven’t been impressive in the time trials – as much as five seconds off the pace in the flying kilometre – it says ‘podium’ to me.

But at around midnight, we’ll know.

Every kind of food and drink; pasta, pizza, seafood, sausages, ham off the bone, beer, wine cocktails, speciality coffees – you name it and you can have it here, if your pockets are deep, that is. 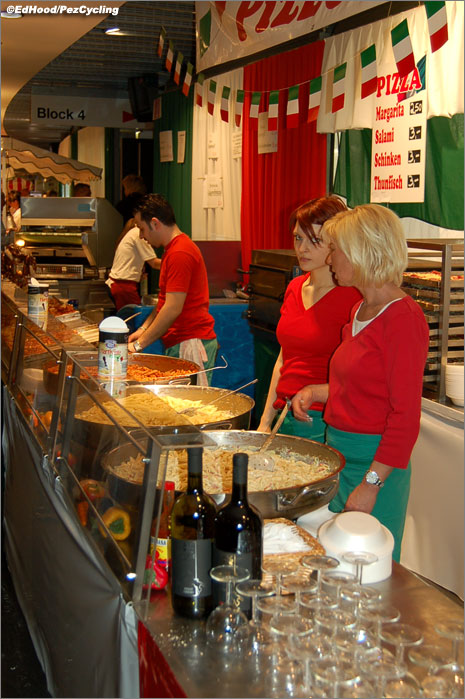 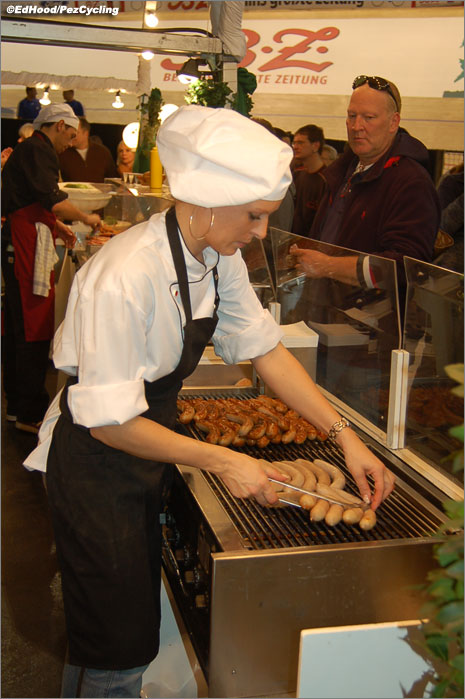 The sprinters warm up the crowd, European champion, Denis Dmitrijew is here and so are all of the German team sprint world champions – Levy, Nimke and Fцrstemann, who has short legs but the most enormous thighs. 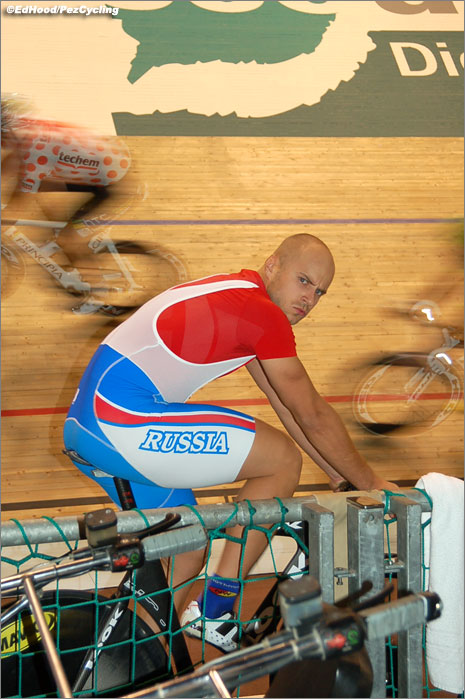 Their bikes are cool, carbon FES, sleek, black and mean. 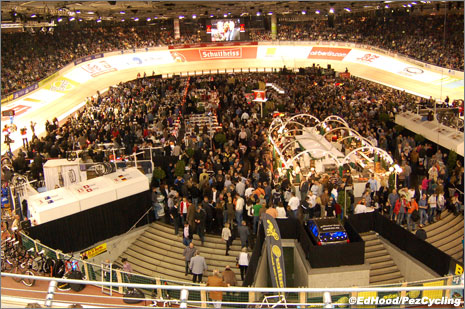 The dernys drone, the BMW stayer bikes throb and pump foul fumes into the cabins but it’s all irrelevant – the final 60 minute chase is all the matters.

“Whatever you want !” the Quo batter out – it almost erases the horrible memory of the Ricky Martin number the house band just killed.

The music isn’t bad at all but not as good as Rotterdam and that damn thing where they all whistle along does my head in.

The vibe is terrific, there are so many people and the hall itself is amazing; designed by french architect Dominique Perrault who won an international design competition in 1992 to get the gig, the construction – with a diameter of 142 meters makes it Europe’s largest steel roof. 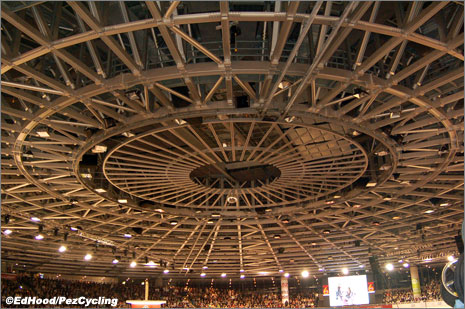 The spots burn down from up there, the speaker needs a beta blocker, the pistol cracks and we’re off.

The finalй is a good one – all down to Bartko and Kluge hauling back a lap on the pained looking Aussies in the closing minutes. 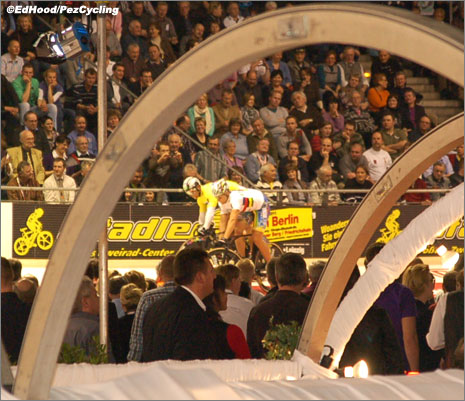 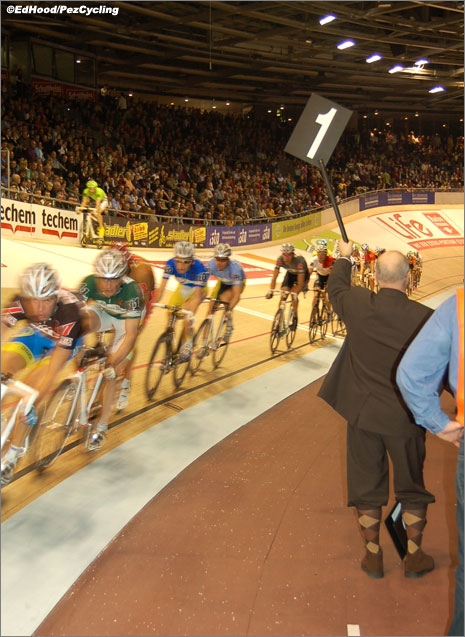 The bell. One lap to go!

The Germans in full flow are an impressive sight; Kluge is even bigger and smoother than Bartko and it’s the Skil man who finally makes the junction and then takes the final sprint too, just to really give the crowd something to scream, whistle, clap and cheer about.

The Aussies were second, our Danes third . . . 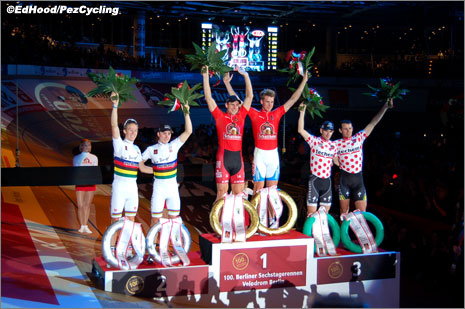 Kris taps at the satnav. 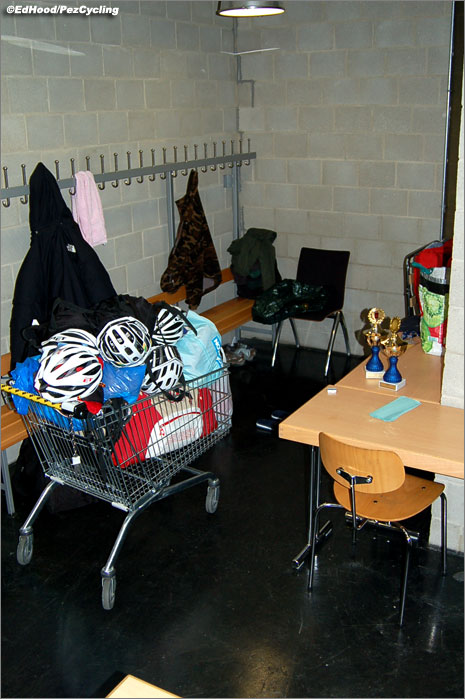 It’s all over. Until next time. 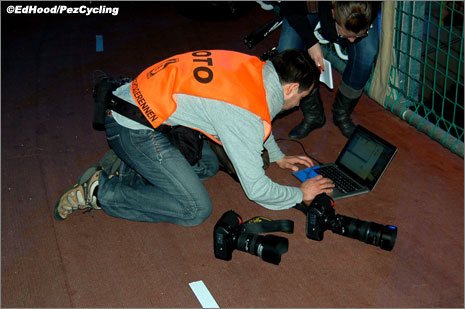 Man on a deadline. I know how it feels.

The Next Stop: Inside The Berlin Six