The Next Stop: Inside The Berlin Six

It’s just like the cool black and white six day pictures from the Cycling Weekly magazine in the 70’s – a huge, spectacularly lit hall with a beautiful wide track; packed stands; the track centre alive with well dressed folks drinking, eating, chatting, laughing; a field of 18 teams hurtling round below the lights as the music pumps and the jerseys shimmer. It’s the way they’re supposed to look, it’s the view of the Berlin Six, and the latest stop for the carnival that is six day racing. 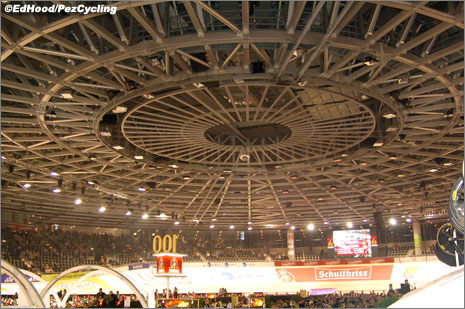 The roof is amazing. 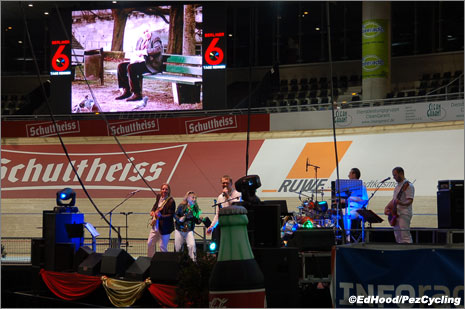 Berlin, the 100th edition of the Berliner Sechstage. 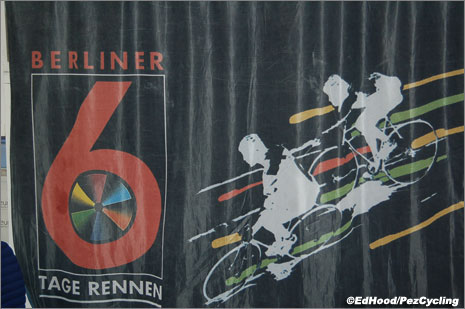 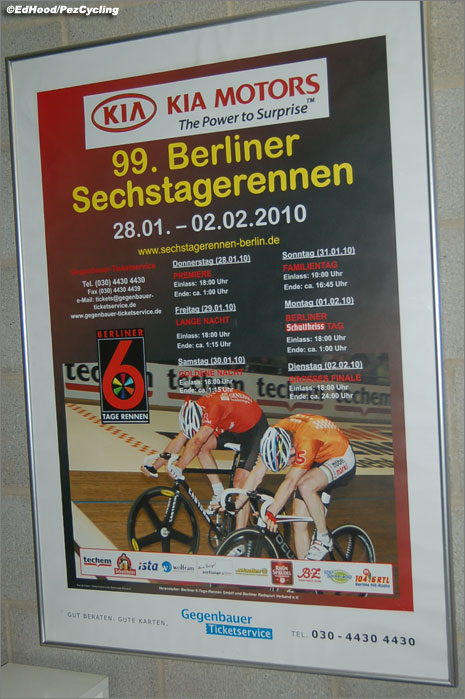 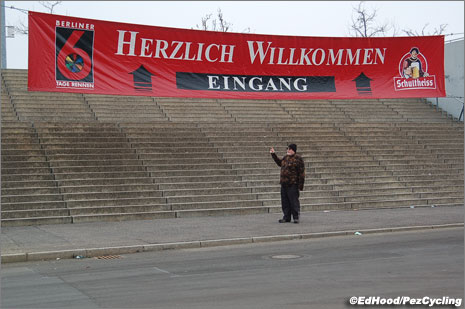 The entrance to the track isn’t what you would call glamorous. 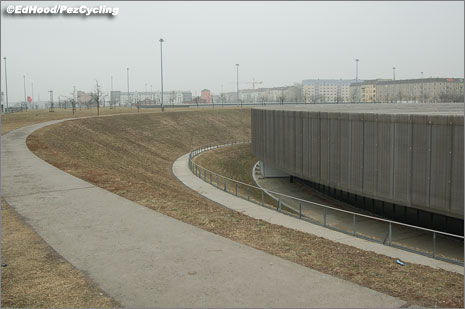 The track roof on the right. 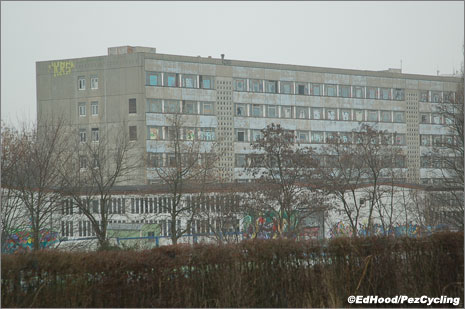 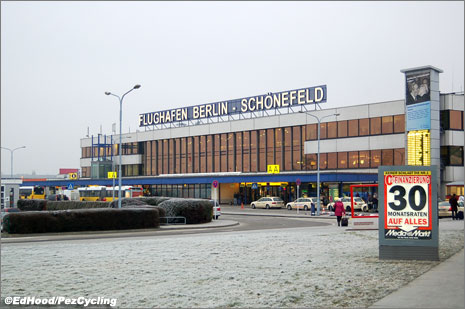 Whilst there’s been a definite down turn in the German sixes, with the likes of Dortmund, Munich and Stuttgart disappearing, there are no such worries for the Berlin organisers. 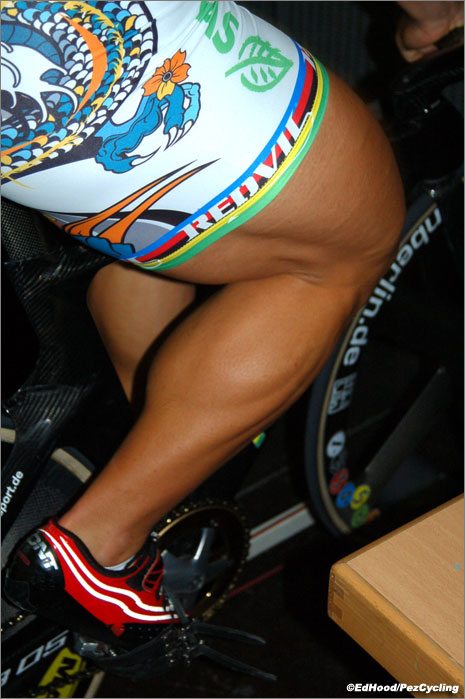 How could you not want to watch track racing? Check out sprinter Forstemann’s thigh. 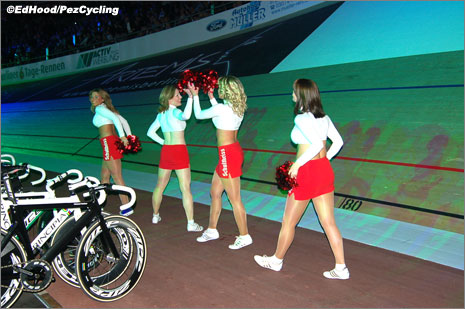 Don’t forget about the girls. 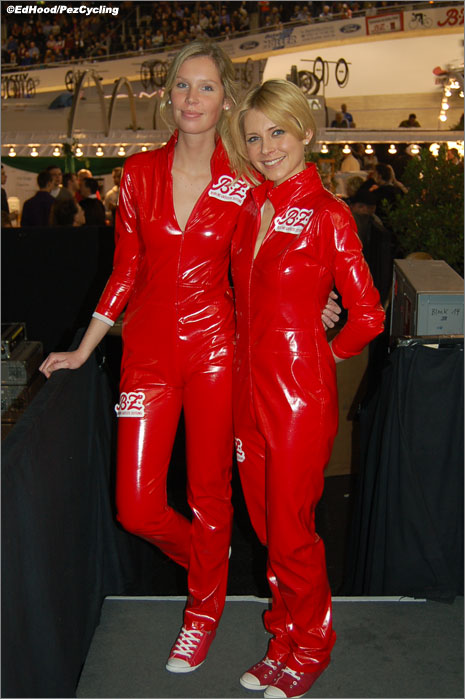 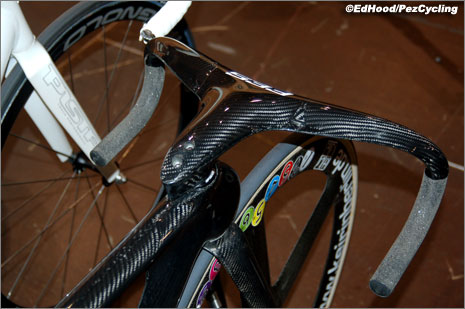 And the Bikes. Check out the carbon on this sprinters’ FES.

Their main problem is where to put everyone – but that doesn’t stop the Organisation from pleading poverty. 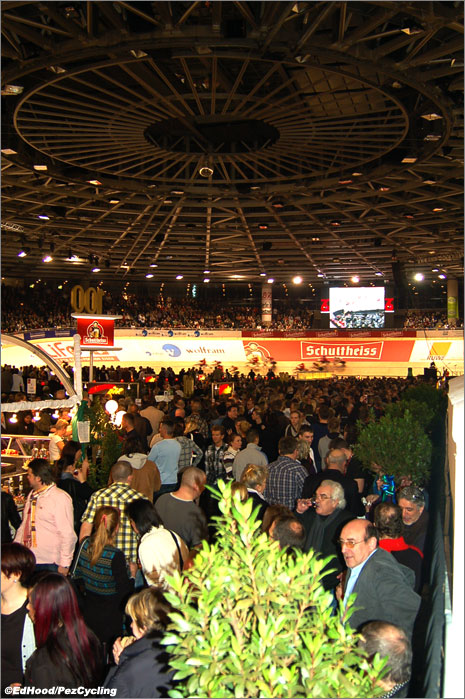 Like all the best sixes, it has ‘a formula’ – whilst Grenoble has sprinters and cabaret: Gent has pils and dernys, Berlin has sprinters – and ‘stayers.’ 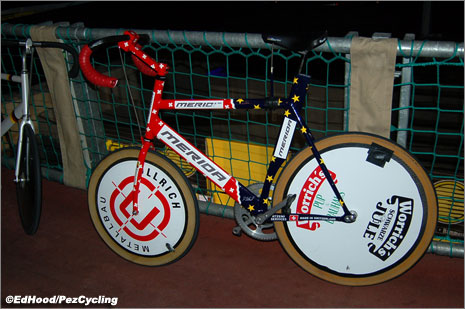 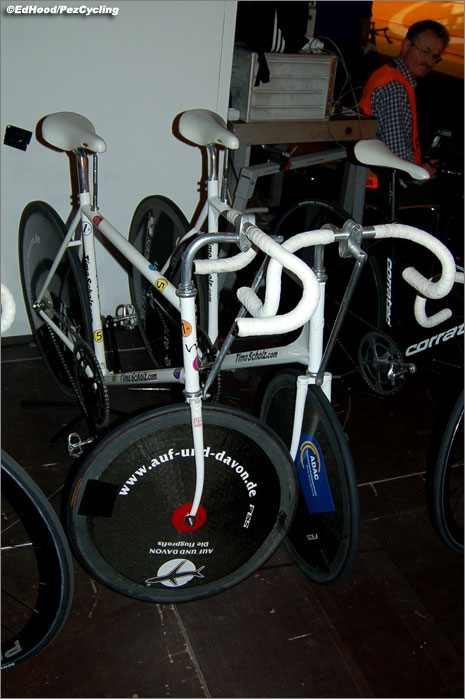 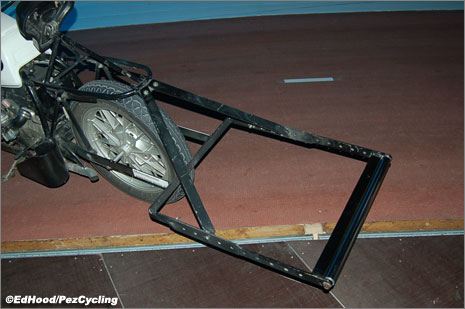 The motor paced discipline may have been abandoned by the UCI at the Worlds back in the 90’s but in these parts they still like those brave, (or is it crazy ?) men who hurtle round the boards at big, big speeds behind motor bikes. 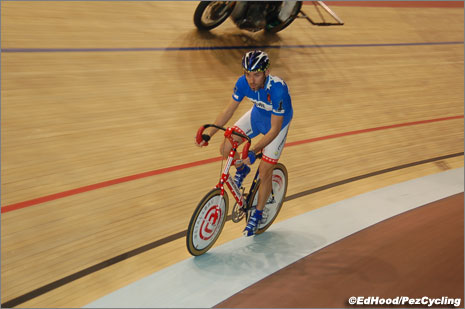 Winding that big one up to get behind the motorbike.

The driver stands upright on the BMW pace bike to ensure maximum shelter for the rider behind. The reversed front fork lets the rider tuck in behind the roller on the pace bike. The distance between the back of the motorbike and the roller is set according to the speed the track can handle. 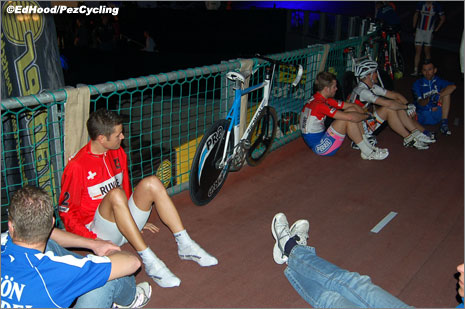 The faster the track, the closer the roller is set (and the bigger the gear is); at Berlin it’s not too close – the track is only 250 metres – but on a big old fashioned concrete, outdoor track the roller will be set tight and speeds of 100 kph are the norm. 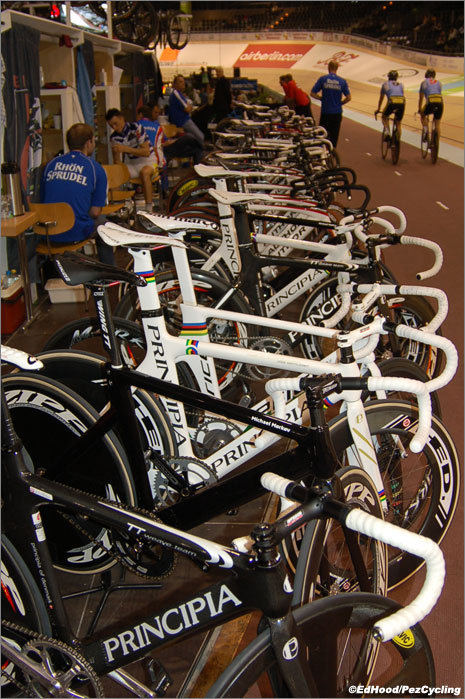 Lots of fast bikes about. 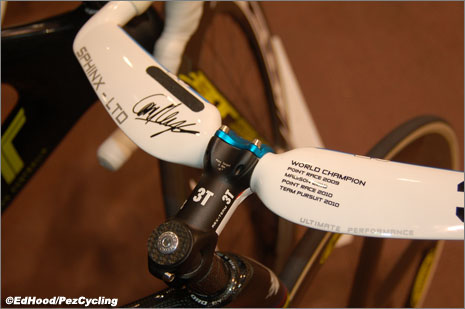 There were a lot of ‘faces’ around, tonight.

Jack Simes dropped by; Worlds silver medallist in the kilometre in 1968, ex-six day rider and the man who’s trying to get the six days back to the USA.
He has the ideas, it’s just hard sponsorship cash which he lacks – but the man is a trier and we wish him well.

Julien Stevens is mechanicing here, ‘who ?’ I hear you ask.
He was a good pro from the early 60’s ’til the late 70’s with the some of the best teams of the time, Solo, Willem 11, Faema, Faemino, Molteni and Ijsboerke. 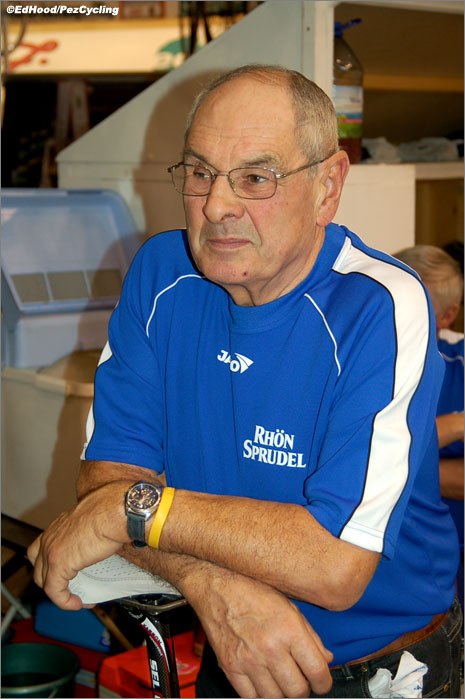 He was one of Merckx’s henchmen but built decent palmares of his own with a Belgian pro title and stages in the Tours of Belgium, Catalonia, France and Switzerland. He was Belgian pro pursuit and motor paced champion and a good six day rider – he won Gent, with Sercu. But he’s perhaps best remembered as being hot favourite to win the 1969 world pro road race championships.

He and Dutch kermesse specialist Harm Ottenbros were away together in the last kilometres, all the smart money was on hard man Stevens – but Ottenbros wasn’t on the Dutch team because he was a dud and Stevens was left to think about ‘what might have been.’

Erik Zabel was here – his son, Rik is riding the junior race – for a presentation with Andrei Greipel, who was in his standard lumberjack shirt and jeans outfit. 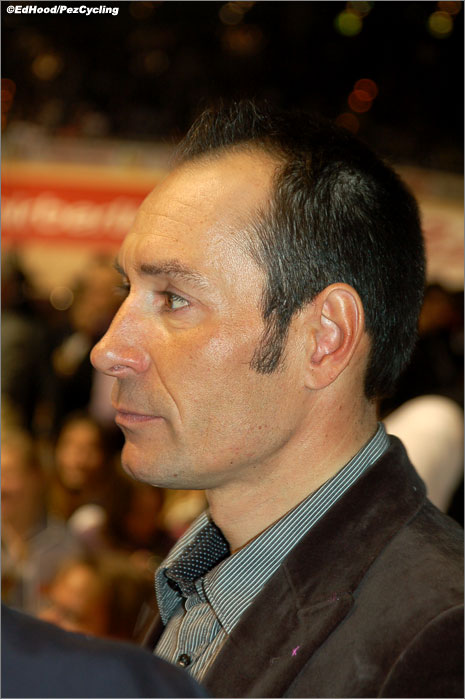 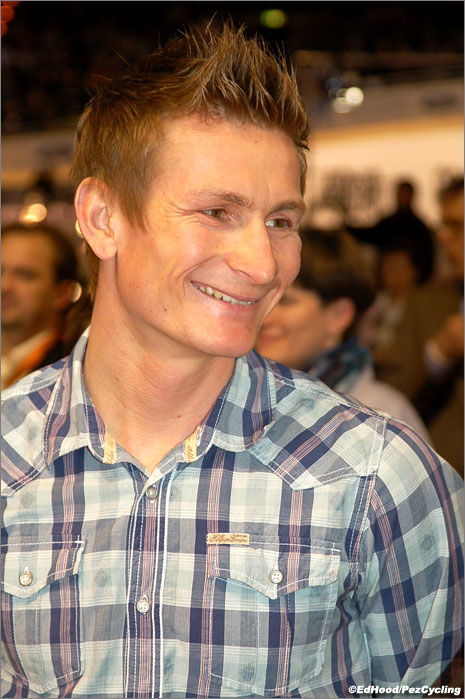 Jack Simes came back later in the evening to introduce me to a man who knows a little about tracks – Ralph Schьermann. 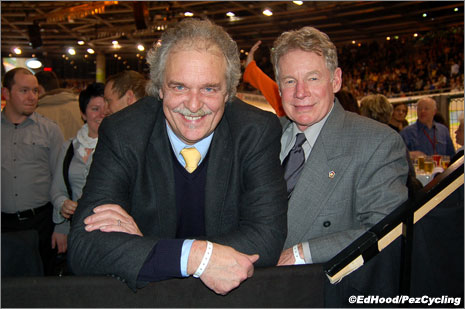 He’s the third generation of a family of architects who have been designing and building tracks since 1925, including the Berlin, Rome, Mexico, Munich, Seoul, Barcelona and Beijing Olympic tracks. He has work on the drawing board for China, Japan, Belgium, France, the USA and Scotland.

Our Danes won the big chase tonight, but the morale among the riders isn’t the best – there are lots of ‘political’ issues (that’s money, to you and me) and despite the huge crowds the guys are all a little ‘flat.’ 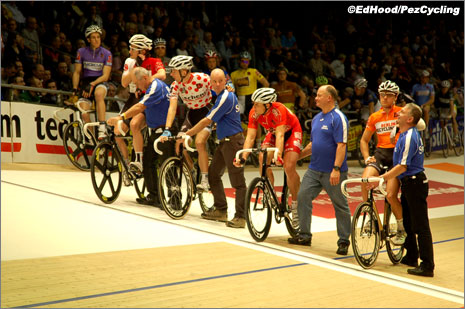 Preparing for the big chase. 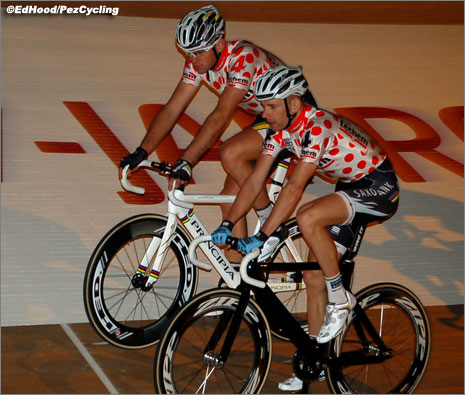 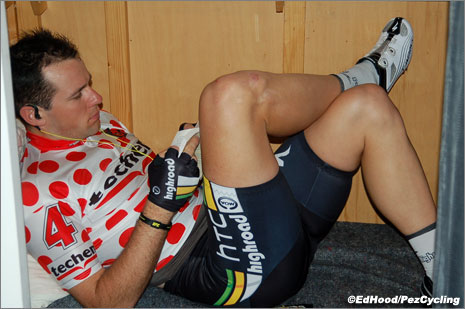 Alex reads while not racing. 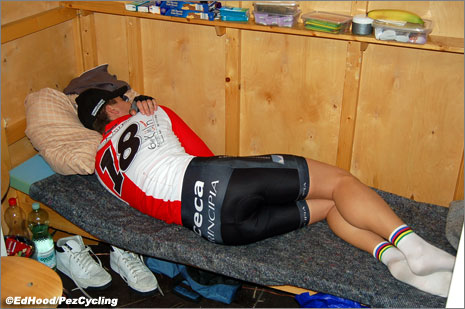 Some of the teams are dead – the Czechs, Dostal and Hacecky were going about as slow as I’ve ever seen riders go who are still in the race.

Late in the night they have a 1,000 metres flying start TT and the Germans, Bengsch – who partnered Bartko to the win in Bremen – and Kalz banged out a 56.

When you consider that the specialists only ride a handful of kilometres each year because they are so hard and that the six day guys are riding one every night – and that’s after a 45 minute chase – you realise the quality of the best six day riders.

It was wearing on for 03:00 when I slumped into bed – but Kris had booked me into a hotel just ten minutes walk from the track.

The Journeyman’s Tale: From Berlin To Copenhagen