If you grew up during the ‘Golden Age’ of 70’s bike racing and you’re a connoisseur of the Belgian semi-classics, then the lumping together on a weekend of the 54th E3-Prijs Harelbeke and 73rd Gent-Wevelgem is a bit of a worry; it smacks of ‘marketing’ to us. But we’re like the dinosaurs; we’ll be extinct soon – and we still have the kermises out in the cabbage fields.

Mid-week races made sure that there were no ‘amateur’ fans – time off work was necessary to view these beautiful races.

The ‘E3’ in the title of the Prijs Harelbeke is a road number – it’s Belgium we’re in – and the first edition was run in 1958 when Armand Desmet won; it almost goes without saying that he was Belgian, as was every winner until 1977 when ‘class on wheels’ Didi Thurau won for Germany.

Winner with the best name has to be Daniel Doom in 1960; he spent most of his career with Wiels beer but also rode for Flandria and Mercier.

The Belgian semi-classics are hard fought races, one of the reasons being that at around 200 kilometres there are a lot of riders still in the mix that wouldn’t be there in a full distance classic with that extra hour of racing.

And whilst the biggest names have won at Harelbeke – Van Looy, De Vlaeminck, Verbeeck, Raas, Maertens, Vanderaerden, Museeuw and Boonen to name but a few – the gate is also open for the big tough sprinters like Bontempi and Cipollini; and the hard men who shine at four hours duration – de Jongh, Ivanov and Lilholt fall into this category.

Last year it was here that Cancellara kicked of his Spring rampage; the year before it was ‘Pippo’ Pozzato teasing us with that super class that we get to see less and less of; Norwegian Kurt-Asle Arvesen won in 2008 and before that ‘Tommeke’ Boonen won for four years straight. 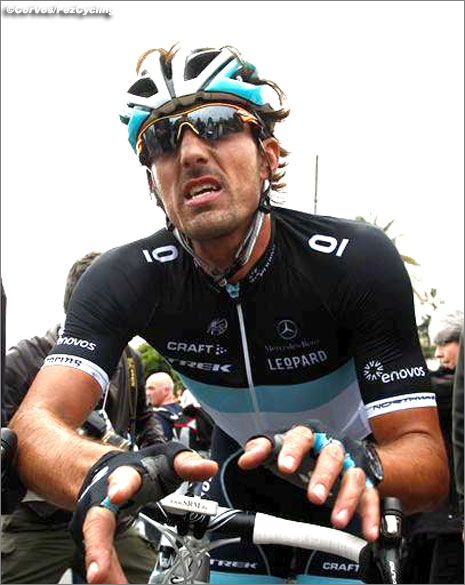 Fabian Cancellara is the defending champion.

The parcours centres on the Flemish Ardennes around Oudenaarde and if you are a Het Nieuwsblad and Kuurne fan then the names of the towns – Brakel, Ronse, Kruishoutem; and the climbs – Eikenberg, Oude Kwaremont and Cote de Trieu won’t be unfamiliar.

Within the 203 kilometres are 12 ‘bergs’ and numerous sectors of cobbles – naturally.

Fabian Cancellara’s (Leopard & Switzerland) name has to be mentioned, his second place at Sanremo displayed that he still has the strength of a bull and he’s a man that thrives on winning.

Fab’s erstwhile employer, Bjarne Riis seems to be doing rather well for a man whose team the media predicted was ‘finished;’ with Contador winning the ‘Queen’ stage in Catalonia and Nick Nuyens dominating Dwars door – form is form and the Belgian could be a force here too. 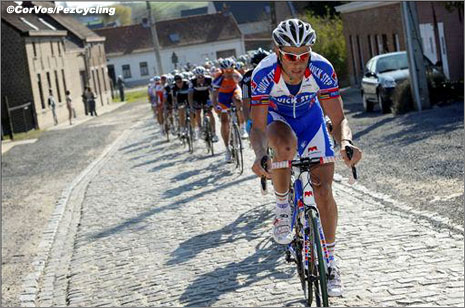 Tom Boonen (QuickStep & Belgium) is being ‘saved’ for Gent-Wevelgem but another Quickstep name that jumps off the page is that of Dutch champion Niki Terpstra.

It’s unusual to be naming a man originally from Buenos Aires as a favourite, but from Het Nieuwsblad through to Paris-Roubaix Juan Antonio Flecha is a danger man in any race with cobbles and ramps. 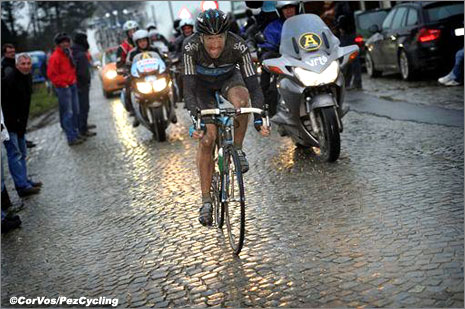 And surely it’s only a matter of time before team mate and British champion, Geraint Thomas tops a podium. 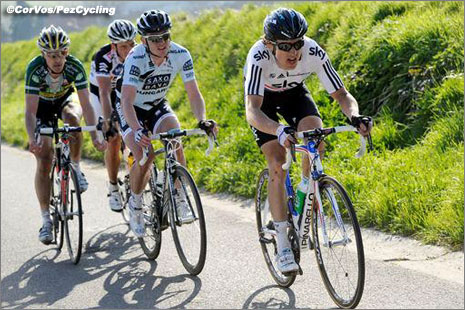 Garmin need a win; it was difficult to see how they could lose at Sanremo, but they did.

The distance was just too much for Heinrich Haussler (Australia) and world champion Thor Hushovd (Norway) was caught on the wrong side of the split – 203 K is much more to Haussler’s taste and he’ll need a good ‘try out’ for the Tour of Flanders. 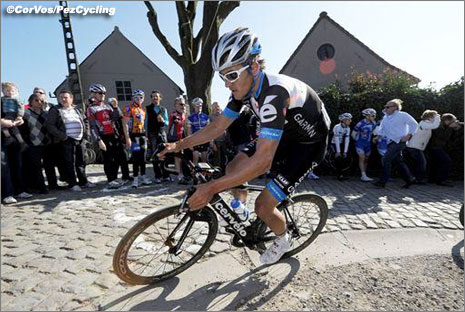 Rabobank have been rampant so far in 2011 and Dutch Het Nieuwsblad winner Sebastian Langeveld returns to familiar roads on Saturday. 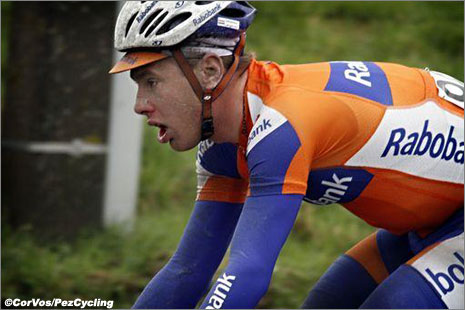 Always aggressive Vacansoleil will be in the mix; as will Europcar’s French champion Thomas Voeckler who is surfing a foaming wave of form at the moment – although it must be getting tougher to pull off that ‘last three kilometres’ magic trick that he specialises in. 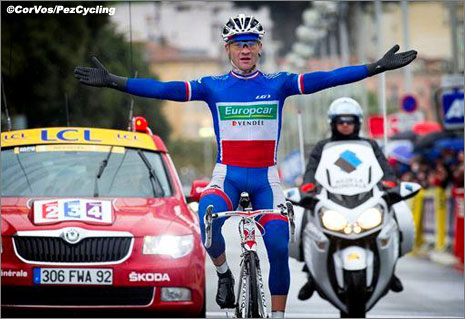 And a man who caught the eye at the Primavera was Leif Hoste (Katusha & Belgium) looking more like the rider who used to be such a force in the Ronde. 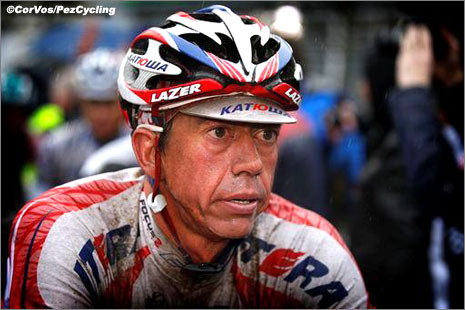 Despite the event being ‘only’ UCI HC and not part of the Pro Tour, it looks like a good race to us.

Sunday’s Gent-Wevelgem
There’s no such caveat with Gent-Wevelgem it has this prestigious status means that it will enjoy a strong field and the distance reflects this at 235 kilometres – and 18 classified climbs. 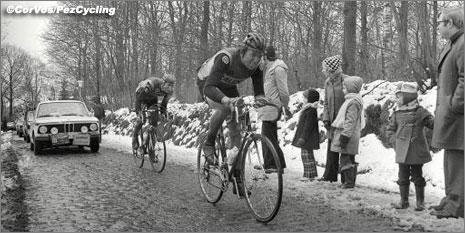 Gent-Wevelgem is typically defined by the wind and the Kemmelberg.

It was 1934 when Gustav Van Belle won for the home nation – Schotte, Van Looy, Anquetil, Merckx, Maertens, Hinault, Kelly have all won this race.

Until Dutchman Gerrit Solleveld out-sprinted Sean Yates (GB) to win the race in 1989 it was run over full classic distance; that edition being 265 kilometres, and when Sean Kelly won the previous year it was over 275 kilometres.

Since ’89 the race distance has been around 200 kilometres, but stepping up for the Pro Tour.

Despite the 18 climbs, this is the ‘sprinter’s classic’ with names like Freire, Cipollini (three times), Steels (twice) and Abdoujaparov all on the role of honour. 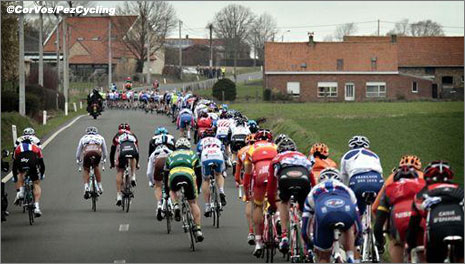 If the wind blows, so will the field…apart.

The parcours don’t centre around the Flemish Ardennes, instead the race flies flat and straight from the start in Deinze in a north westerly direction to the coast and the ferry port of Ostend, if the prevailing south westerly wind is blowing then it’s ‘bordure’ time – echelons form to blast through the cross wind.

And there’s more of the same as the race tracks the beautiful sandy beaches of the Flemish coast south westerly down to Adinkerke before diving south to the nastiness around Kemmel.

All of the ‘hellingen’ are crammed into two loops of a brutal circuit, which accounts for some 70 K of the total parcours.

The Kemmelberg is a fearsome climb; best viewed when it’s wet and the cobbles gleam in strange shades of purple and green as it winds up through the trees like a sleeping dragon’s spine.

The descent can be lethal though; France’s Jimmy Casper came down very badly on it some years ago, costing him teeth, blood, pain and scars. 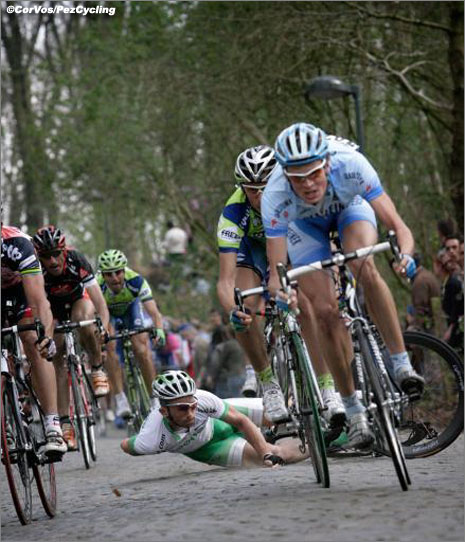 After the two circuits there’s a mad flat and usually wind assisted charge back to the finish in Wevelgem.

If a break had established in the hills it can just about survive to the finish – Boasson Hagen managed it in 2009 with just one for company and last year, Cav’s HTC mentor, Bernhard Eisel (Austria) out sprinted five to grab the glory.

This year it could go either way; but generally, the worse the weather the more chance of a break being successful.

Sunshine makes for happy cyclists who are much less liable to throw in the towel.

Three sprinters who won’t be on the start line due to illness are the aforementioned Boasson Hagen, Rabobanks’s Spanish three time world champ Oscar Freire – who won in 2008 – and a man who should already have a win in this race Lampre’s ‘Ale Jet’ Petacchi, the Italian already having won the other two ‘sprinter’s classics’ – Milan – Sanremo and Paris – Tours. 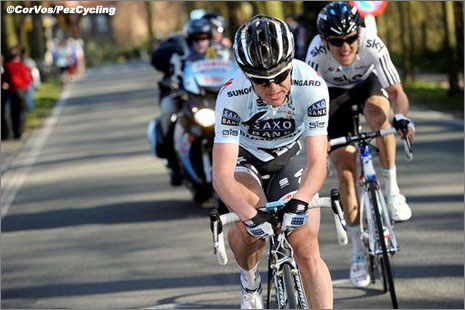 Nick Nuyens demonstrated a return to form with victory at the Dwars door Vlaanderen on Wednesday. He’ll be one to watch this weekend.

Boonen will be looking to make it five – but not as much as his manager, Patrick Lefevre who is not defined by the phrase; ‘good loser.’

But don’t forget another QuickStep man – like Nick Nuyens – who is back from the wilderness, Nokere Koerse winner, Gert Steegmans. 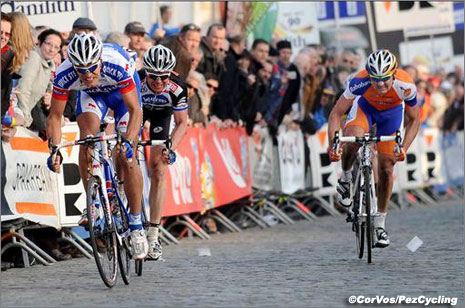 Back from the wilderness: Gert Steegmans. 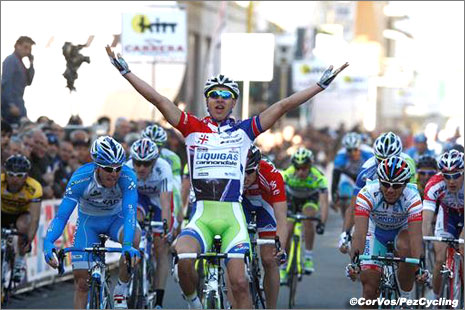 Morale at BMC is high thanks to Cadel Evan’s win at Tirreno and both George Hincapie (USA) and Marcus Burghardt (Germany) have won this race before – with Alessandro Ballan (Italy) and Greg Van Avermaet (Belgium) displaying strong form on the Ligurian Riviera last Saturday. 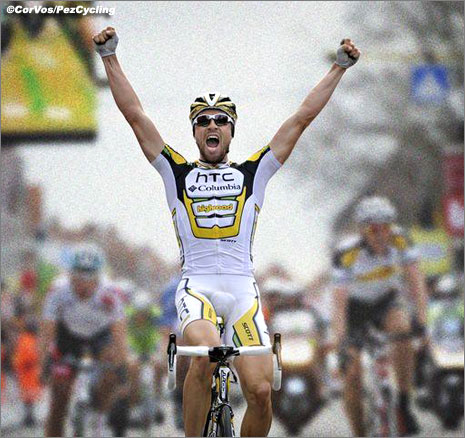 Last years’ winner, Bernhard Eisel returns for HTC with Aussie Primavera winner Matt Goss; the Tasmanian was third here in 2009 and with his current form is a potential winner.

But it’ll be a few more weeks before HTC’s other big ace, Mark Cavendish (GB) can think about winning at this level. 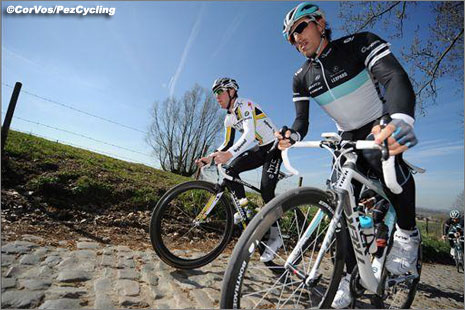 Fabian Cancellara and Matt Goss train on the Koppenberg, Friday afternoon. They’ll be doing battle against each other again soon enough.

Leopard TREK, Vacansoleil and Radio Shack won’t riding for training either – and forget Saxo Bank at your peril.

Two days of great racing in the Heartland, we love it – even though it should be weekdays, really.