Race Report: After the most inactive race of the World Championships, Canadian Clara Hughes enlivened the Women’s road race with a solo attack that nearly came off. But it all came down to a bunch sprint and last year’s winner; Giorgia Bronzini made it two in a row. Not a great advert for women’s cycling, but the tactics ruled (or ruined) the race!

The Elite Women cover 10 laps of the 14 kilometre circuit for 140 kilometres (didn’t need the calculator for that one!) The Elite Women have more experience than the riders in the previous races, so we should see more structured tactics and hopefully less crashes. 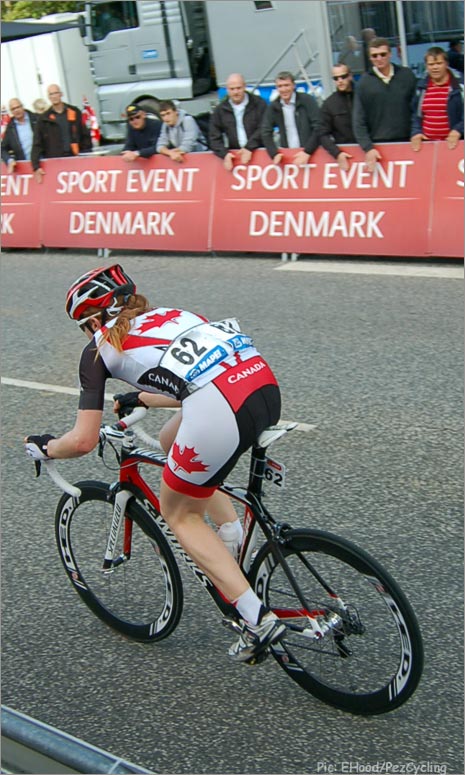 Canada’s Clara Hughes had the legs and guts to take it alone… almost.

The sun had come out and the weather was perfect at the start, although there was the possibility of rain later. The bunch rolled out at an easy pace as you would expect from the world’s top riders. All the top countries had a rider at the front and the race stayed together round the first lap, apart from two or three out the back for different reasons; the Syrian team of two didn’t last very long.

The first bit of action came from Emma Pooley (GB) near the end of lap 2, but it was only a trial to see if anyone felt like doing anything early.

The end of lap 2 (28K’s) it was all together with a lot of Swedish, Italian, German, Dutch, Canadian and British riders at or near the front. All the Croatian riders were at the back not looking good and would probably be joining the Syrians on the bench soon. The race speed was around 40 kilometres per hour at this point. 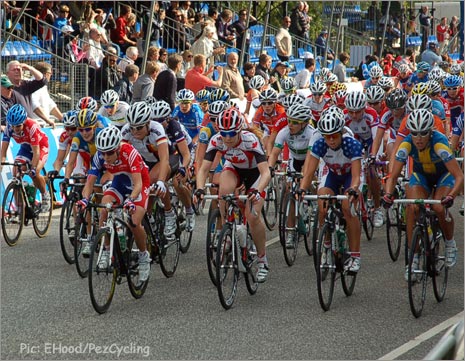 Anna Sanchez of Spain needed a wheel change, luckily for her the Women’s race does have team cars and she was able to work her way back to the peloton.

End of lap 3 (42K’s) and just over 1 hour of racing and it was all together still, the only breaks being off the back at this point. The Russians and Belgians came to the front and the speed rose for a while, Pooley again put the pressure on up the little climb on the back of the course, but it didn’t cause any splits.

Lap 4 (56K’s) done and all together still. Some good news for Women’s racing is that Rabobank are thinking of having a women’s team and the HTC team from this year will continue next year.

The Russian’s started to speed things up, the peloton stretched out on the descent before the little climb at the back. It didn’t last long and it was back to watching each other again. The Russian’s put Zabelinskaya off the front and again it came to nothing.

Lap 6 (84K’s); Emma Pooley (GB) was first over the line again and a Belgian gave a bit of a push after the line, but again they all sat up and looked at each other. With 50 odd kilometres to go it looked like they were all waiting for the sprint, not a great advert for women’s racing, but I guess the Rainbow jersey is the important goal in the end.

Lap 7 (98K’s) ended with the Russian’s as the only team trying to make a race out of a procession, Antoshina lead the peloton over the line, but as soon as she moved over the pace dropped again with the Dutch and Swede’s in control.

100 kilometres done and the Italians lead with Cantele coming over the top of the rise on the back of the course. The Dutch and Germans closed the move down with them all looking over their shoulders to see if there was any damage.

The race had split into two large groups, but again it was starting to come together. Norway was keen on a break that came to nothing, this launched Amber Neben (USA) off the front, and she was chased down by Holland, Italy and Germany and then the others in the peloton. Clara Hughes of Canada made the first real attack to solo off the front and she gained a good gap of around 20 seconds, but the peloton kept her in sight with Gillow of Australia on the front.

2 Laps to go (28K’s) and Hughes crossed the line 36 seconds in front of the peloton with all the top women still waiting to see what would happen. The Italians and Nicole Cook (GB) rode on the front of the bunch, Becker of Germany tried to join her but was pulled back at the top of the climb.

Linda Willamson of New Zealand was next to try her luck, she was caught by an Italian who sat on her until the others came back to them. Hughes pushed on with her 25 second lead as the bunch seemed to loose interest.

The Australians with the Italians were working to bring back Hughes and at the start of the last lap (14K’s to go); the brave Canadian was leading by 38 seconds from an Italian led group. After the descent the GB team came to the front to pull back for their rider Liz Armistead, who is their sprinter, but all countries seemed to be massing at the front of the peloton as they tackled the back climb for the last time.

It was a Russian again who wanted shake things up a bit as the gap went out to 37 seconds, Holland put five girls to the front for Vos and the lead started to come down. Hughes was still looking fresh, but her gritted teeth were maybe a bad sign.

5.5 kilometres to go and she had 20 seconds in hand with the Dutch still doing the chasing work. The bunch could see her up the road; this caused an Italian to attack which was the end of Clara Hughes’s big attempt. Next to go was a German, but she wasn’t allowed to go far. 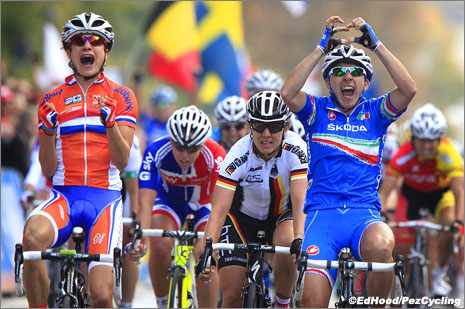 The Last Kilometre: The field spread out as every rider could see themselves in the rainbow jersey. German, Worrack opened the sprint way early with no one on her wheel, then, in the middle was last year’s winner; Giorgia Bronzini with Marianne Vos and Ina Teutenberg on her wheel, but the Dutch and German girls didn’t have the speed to come round the flying little Italian, who scored the unlikely double of two consecutive Rainbow jerseys.

The Dutch tried so hard, but missed out by about half a wheel to Italy.

After the finish Bronzini said; “This was the better of my wins, because it’s the second. I thought we would catch the Canadian because the Dutch and the Germans were chasing.”