It was the look on Tony Martin’s face before the start which told you that he was going to win the Grenoble time trial in this year’s Tour de France. The focus, the sheer iron will – and then there was the attention to detail. The track-style ‘speedsuit’ cut low off the neck so as not to interfere with the breathing, the polished gleam on the bike frame and aero helmet – and then he insisted on taking the spare bike off the roof off the car and test riding it.

There’s only one man can stop the 26 year-old German from reaching the rainbow in Copenhagen – Fabian Cancellara.

Last year the Suisse enjoyed a season which is the stuff of fantasy, the GP E3, Tour of Flanders and Paris-Roubaix all fell to him; his Tour was a triumph, taking the prologue, spending a week in yellow and winning the final time trial on a windy afternoon through the vineyards of Bordeaux. 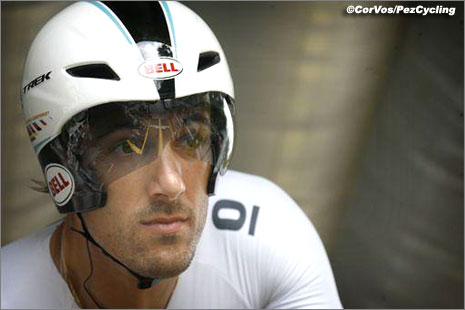 This year there hasn’t been the same sparkle; out witted by Nuyens in Flanders, and Garmin in Roubaix, the Tour came and went for him – certainly he guided Leopard team mate Fuglsang to the red jersey of Vuelta leadership in the Benidorm TTT but it’s not been the season we’re used to from the man from the 30 year-old from Bern.

How much influence the behind the scenes stress of Leopard’s main paymaster thumping the table over lack of results and lack of fresh cash affected the performance of the riders, we can only guess at – but it won’t have helped. 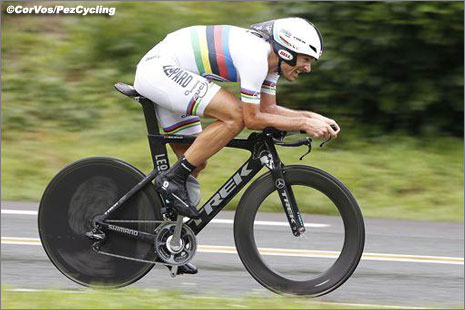 Cancellara quit the Vuelta after a lack lustre time trial and headed home to start his preparation for Copenhagen.

Only a fool would write him off – and in a recent Sporza interview he was very confident about his chances.

Tony Martin’s preparation started way back at the Volta ao Algarve where he took the time trial and GC; he repeated the feat in Paris-Nice; won the TT in the Pais Vasco and in the Dauphine – a dress rehearsal for the Tour TT – and took out the chrono stages in the Tour and Vuelta. 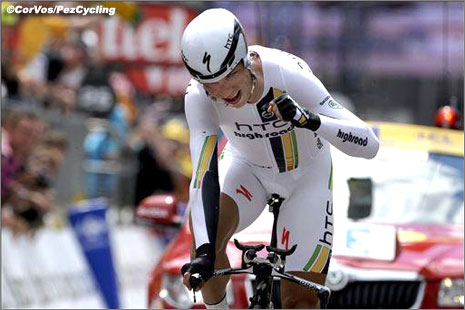 The only ‘blip’ on a perfect season of ‘clock bashing’ was losing the German championship to HTC team mate Bert Grabsch.

And 2008 world champion Grabsch would be a man to note if it wasn’t for all those corners in Europe’s most ecologically friendly capital city – Bert isn’t a man for that technical stuff.

Martin won Worlds bronze against the watch in 2009 and 2010 – but last year’s podium place may well have been higher but for an untimely flat tyre. 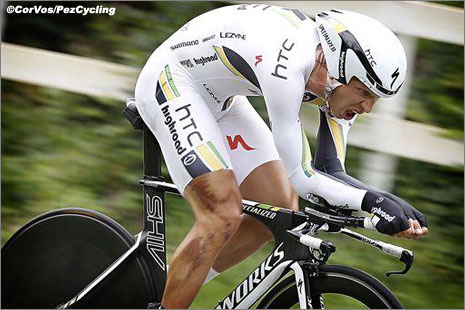 This year, acts of God notwithstanding, Martin must find his rainbow.

The 2010 podium was completed by David Millar – last autumn saw the Scot in sparkling form against the watch, he followed Worlds silver with Commonwealth Games gold and a course record in the Chrono des Nations.

This year the classy 34 year-old beat Alex Rasmussen to win the closing time trial in the Giro but his autumn has been quiet palmares-wise, due to the birth of his first child. 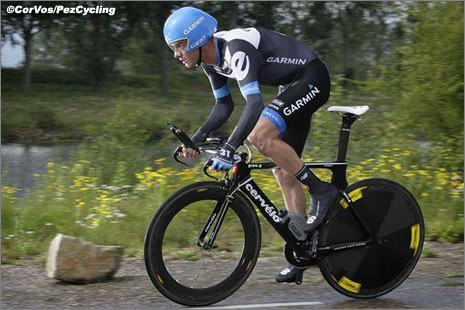 He’s an emotional man and will want to celebrate the event with a big performance – bronze is possible.

But it says much about the quality of professional British time trialling that national elite champion and winner of the TT in the Tour of Britain, Sky’s Alex Dowsett has been left at home.

GB’s second selection is a man who has taken a long time to mature as a roadman; Bradley Wiggins. 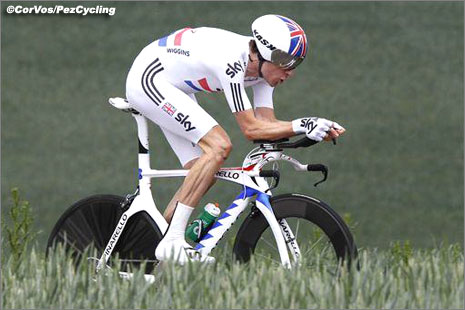 A year or two ago one would have questioned the wisdom of selecting the tall Londoner – whilst his class was unarguable, his motivation was frequently questionable.

Not these days, a strong early season was capped with GC triumph in the Dauphine.

His crash compromised Tour was quickly put behind him as he bounced back to a brilliant Vuelta podium.

If the Spanish mountains are out of his legs and that flowing cadence from the Tour TTT is back in those long legs then he can make the podium.

Just off the podium last year was the man who burst on to the chrono scene at the 2010 Tour of Romandie in the spring and then continued to amaze in the Giro – Richie Porte (Saxo). 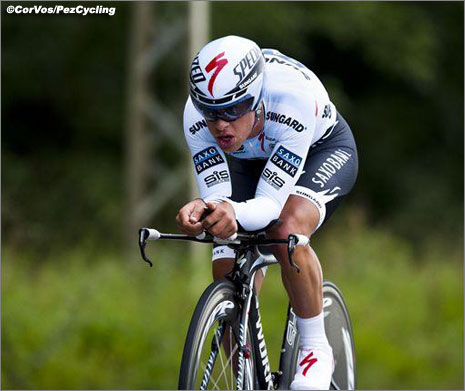 Fourth on home roads was a good result for the young Tasmanian, he’s a year older and stronger – but there’s only so much room on that podium.

There are other names; Dutchmen, Lieuwe Westra and Stef Clement; Swede, Gustav Larsson; Italian, Marco Pinotti; Canadian, Sven, Tuft – and then the ‘young guns’ on the way up.

Homeboy Jakob Fuglsang; Aussie Jack Bobridge; Kiwi, Jesse Sergent and his pursuit nemisis, American Taylor Phinney – but if I had to put down the dough at the bookies, I’d go: