Race Report: First road race in Copenhagen and first Gold goes to Great Britain with Lucy Garner showing a very clean pair of heels of about three bike lengths from the others. With only 1 K to go it looked like an Italian or a German would win, but they just couldn’t stay out front and the race came down to a (slightly) up-hill finish.

The first road race event was for the Junior Women, 74 riders set off in Rudersdal for 70 kilometres on a fast circuit with two small climbs. It didn’t take long for the first crash, two Australians and a New Zealander hit the barriers on about the second bend. Second crash came on the a little rise at 14 kilometres, this time about five or six riders came down and stopped another 20.

The first proper break came from Ammy Roberts (GB) who gained a 19 second gap on the climb. There was no concerted chase behind with the Dutch, Norwegians, Italians and Russians on the front of the peloton. 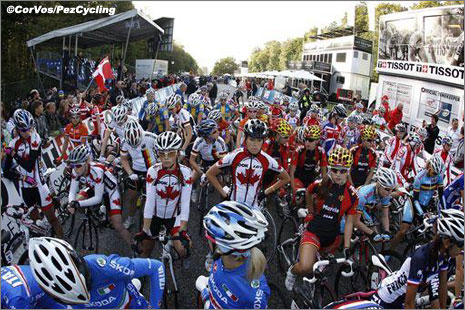 After half an hour of racing the girls had covered just over 20 kilometres and Roberts was holding the 19 seconds advantage on the Danish and German led bunch, at the back of the race there were one’s and two’s of crashed riders trying to get back on.

At the 28 kilometre mark at the end of lap 2, with 3 to go, Roberts was caught and immediately Nguyen from Vietnam headed off up the road. The Italian team took control of the bunch, but let the little Vietnamese girl hang out in front at 7 seconds for a few kilometres until the little climb on the back of the course after 31 kilometres/48 minutes of racing.

The Italians put in two or three big attacks to split the race, not so much to put anyone up the road, but to eliminate some riders out the back, which worked, bringing the peloton down to around 30 riders. 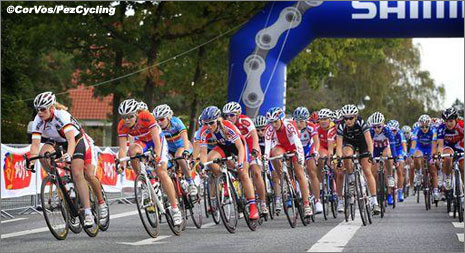 Dutch rider; De Jong was next to try a solo break, Nessmar of Sweden started to chase her down, she was caught by Usabiaga (Spain) and the two combined well, but the peloton sped up through the end of lap 3. De Jong had 9 seconds on Nessmar and Usabiaga and 16 seconds to the bunch.

Nessmar and Usabiaga were caught on the descent from the finish area, but De Jong was still out on her own on the back section climb as Krцger (Germany) chased her. A group of 5 formed between De Jong and the peloton. They were Krцger (Germany), Bartiloni (Italy), Drexel (Mexico), Barker (GB) and Ewart (Canada). They caught De Jong, but didn’t get organised and only had a 7 second gap at the start of the rise.

They were caught and Italy sent Rossella Ratto up the road, she is European Road and TT Champion and a very dangerous rider to give any time to. She soon put 14 second into the others as her team mates closed down any chase attempts.

At 56 kilometres, with 1 lap to go, Ratto was 6 seconds ahead. The peloton were not managing to organise any sort of work. Mieke Krцger made another attempt and closed up on to Ratto and the two started to work well together and the gap lengthened to 23 seconds at the base of the back straight climb, at the top they had 21 seconds in hand.

Belgium and France went to the front of the peloton with only 9 kilometres to go, the Russians added their help, but it was a good advantage for Ratto and Krцger, it was looking very good for Krцger as she seemed to be the stronger of the two girls, but Ratto is a very experienced rider. 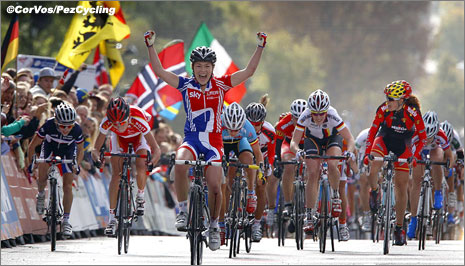 5 kilometres to go and they had 36 seconds as Lucy Garner (GB) attacked the peloton to try for the bronze medal; unluckily the Danes shut her down.

The last kilometre and the two could be seen by the bunch, Krцger and Ratto slowed and the sprint started round them with a Russian (Kashirin) first and then a Spanish (Gutierrez) rider, but on the outside Lucy Garner (GB) shot passed them all to take two or three bike lengths lead from the Belgian rider; Jessy Druyts and from Christina Siggaard of Denmark. 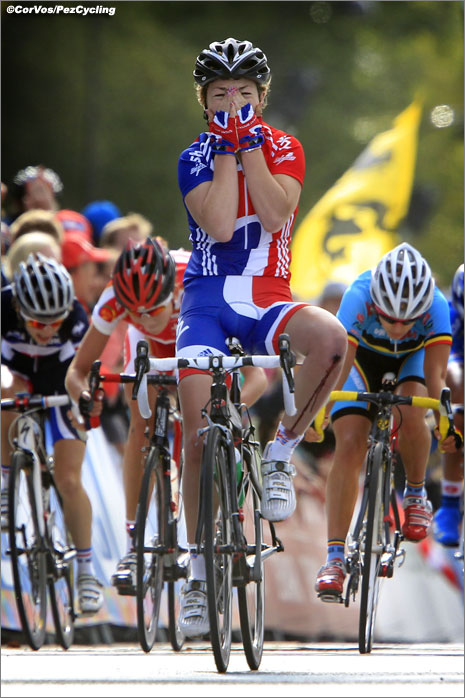 Garner had the speed and strength to have time to look back and put both her arms in the air. The young Lucy Garner couldn’t believe she had won and burst into tears over the finish line. She is only a first year Junior so will have the pleasure of wearing her jersey all year and defend it next year.

She could not describe how she felt after the finish, she knew she had won and didn’t look back. She was happy to show her Union Jack finger nails to the camera.