Race Report: Day 2 of the Copenhagen World Championships saw the Junior Men and Elite Women tackle the two lap 27.8 kilometre course. The Junior Men’s race was a close run affair between Wurtz Schmidt of Denmark and Oram of New Zealand. The Women’s race, on the other hand, was excitement up to the last pedal stroke with Judith Arndt crushing the opposition.

Junior Men TT World Champs
After yesterday Australian domination it was a different story for the Junior Men’s Championships as the home nation of Denmark put up a great battle for the medals podium over the 27.8 kilometre course. Early leader, and recently interviewed on PEZ, James Oram from New Zealand had the best time for nearly 2 hours, he sat on the top podium seat in the cold until Denmark’s Mads Wurtz Schmidt knocked him off the top place with a 4 second advantage. 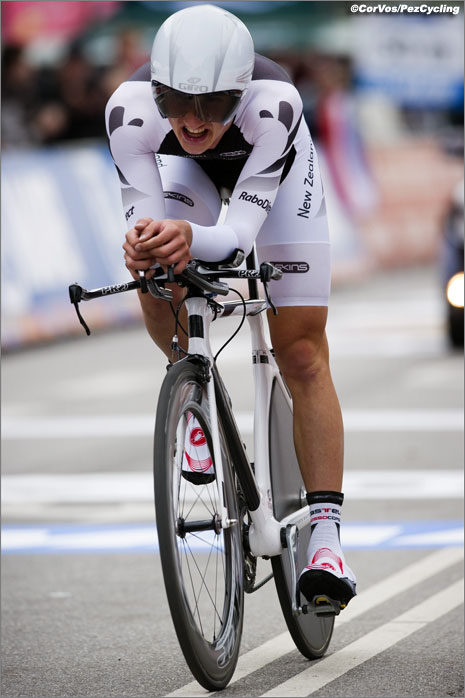 James Oram had the best time for two hours…that changed when Schmidt came through though.

Australia still managed to take a medal in the shape of David Edwards with the bronze. Edwards started fast and looked like emulating yesterday’s Australians, his speed ran out towards the end, but he managed the podium by a good 12 seconds from Markus Faglum-Karlsson of Sweden. 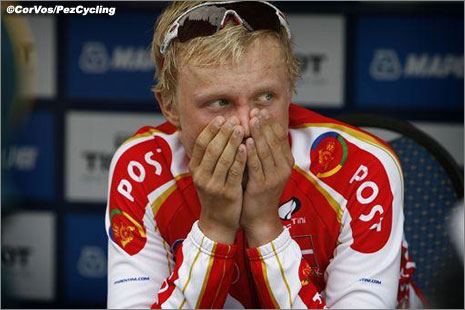 Mads Wurtz Schmidt anxiously waits to see if his time will hold on for gold – it did.

Kristopher Jorgenson of the US finished in a credible 7th place only 47 seconds off the Gold medal with Jon Dibben of Great Britain only 1 second behind him. 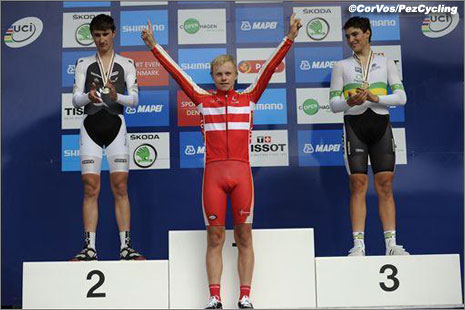 Elite Women TT World Champs
The earlier starters were able to race in dry conditions, but as the race progressed the rain looked as though it would make a difference. The Women covered the same course and distance as the Junior Men; 27.8 kilometres made up of two laps of 13.9 kilometres.

Early leader was Rhae-Christe Shaw of Canada with a time of 37:49, another Shaw; Julia this time, from Great Britain put in a great time of 38:57 to go into third position, it didn’t last long as another Canadian Clara Hughes topped her team mate with 37:44 to push Julia Shaw off the podium seats and Elena Tchalykh (Azerbaijan) with a time of 38:08 dropped to third place at this point. Tchalykh was the fastest at the first time check of 6.7 kilometres in 8:24, Hughes after one lap (13.9Kms.) was fastest with 18:28.

For the back half of the race, the rain was falling heavily enough to cause puddles on the road surface and the riders had to ease their efforts on the cobbled section.

Fastest of the rain affected riders at half way was Eleonora Van Dijk (Holland), she put up a time of 18:33, which at that time was the second fastest. 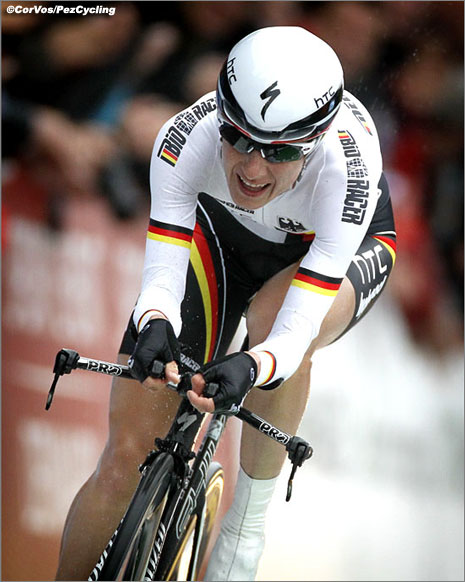 Shara Gillow (Australia) forced her way onto the podium with a ride of 38:07, beating Tchalykh by 1 second, this didn’t last long as Teutenberg in turn beat her with a time of 38:03, and this was getting very close to the two Canadians. Next in was the powerful Dutch HTC-Highroad rider Van Dijk, she was even faster than Teutenberg, to put herself in the Silver medal position with her time of 37:46.

As the 2010 Champion; Emma Pooley (GB) was last off the starting ramp and into the rain, which wasn’t quite as bad as it had been for the mid-section riders…but still wet.

Linda Villumsen (New Zealand) came through the halfway mark in second place with 18:30, Tara Whitten (Canada) was third with 18:33, Arndt (Germany) went second fastest with 18:29.51 and then Pooley beat that with 18:29, but bad news for the Dutch as Marianne Vos was well off with a time of 18:54 at the same point.

At the finish the Canadians were starting to look nervous as their podium positions looked uncertain with the favourites still to come in; Villumsen, Whitten, Arndt and Pooley were all in the hunt for a medal.

Whitten was the first to go top of the podium with 37:33, pushing her country-women down the line, and then Villumsen was next to go top spot with 37:29! It wasn’t to be Vos’s day as she came in nearly 1 minute down. 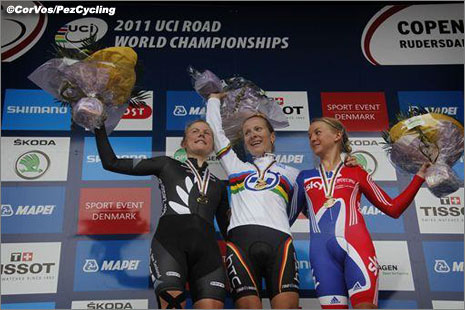 Amber Neben had a fair ride for a time of 37:48, but then it was Judith Arndt who stormed home with the winning time of 37:07. Emma Pooley slowed towards the end and came in with 37:31 for the bronze.

After three times of trying; the German Judith Arndt has won the Women’s World Time Trial Championships to go with her Gold medals in the Road Race and Track.