Race Report: The World Championships for the Under 23 Men could not have been a more open race with constant attacks all around the course. It was impossible to guess who would win this one as no country could dominate the action. Breaks would come and go and then in the end it all came to a sprint. Will all the races finish this way? It’s looking probable!

For the Under 23 Men the course was the same in Rudersdal as this morning, but is 168 kilometres long, 12 laps of 14 kilometres. The Australians and the Italians will be the countries to watch, but then there are so many other good riders that it’s impossible to guess this one!

First break of the day went in the first 5 kilometres. 3 riders, a Russian, Kazakh and a Dane, but their lead was soon pulled back before the end of the first very fast lap. At the end of the first lap of 14 kilometres in 18:46 the bunch was all together. Gradek of Poland attacked off the front as they crossed the line, he didn’t get far, but this gave Carlos Manarelli (Brazil) a springboard to ride off on his own. He was left out front and had a lead of 36 seconds going over the climb on the back straight of the course.

Wippert of Holland jumped out of the bunch to cross to Manarelli, the Brazilian was 1:09 ahead of Wippert and the bunch at 1:39 on the back end of the circuit.

At the end of lap two after 28 kilometres; Manarelli was 1:58 in front of Wippert and the peloton 1 second behind him and the Dutchman was caught just after the line. Austria, Denmark, USA and Russia were on the front, but the chase was not too strong at this point, the gap was down to 1:33 after 42 minutes of racing.

A little group tried to form off the front of the bunch, this didn’t work and left Gianluca Lionardi of Italy out on his own, which was probably not his race plan. After 36.5 kilometres, Manarelli had 41 seconds on Lionardi and 1:19 on the bunch.

Lionardi caught Manarelli as they climbed up to the finish line at the end of lap 3 after 42 kilometres and 58 minutes of racing. The bunch was at 1:59 with the Kazakh’s and Belgian’s on the front.

The lead crept up as the bunch was not trying to pull back Manarelli and Lionardi and at 56 kilometres (start of lap 5) after 1:18:06, they had a lead of 2:53. Kazakhstan rider; Miras Bederbekov set off after the other two, but he was probably asking a lot on his own to cross over 2 minutes.

Another Brazilian; Gideoni Monteiro jumped over to Bederbekov and by the 64.5 kilometres Lionardi and Manarelli had 2:41 on Monteiro and Bederbekov and 3:51 on a uninterested bunch.

70 kilometres and the Italian and Brazilian were 2:27 ahead of the Kazakh and the Brazilian and 4:39 in front of the peloton, who will soon have to start some sort of chase to not miss out on the medals.

This situation stayed much the same through the next lap and on the climb on the back section of the course at 78.5 kilometres; Leonardi and Manarelli were 2:35 ahead of Bederbekov and Monteiro and 4:15 ahead of the peloton, so things were speeding up a little.

84 kilometres done and Manarelli/Leonardi had 2:58 on Monteiro/Bederbekov and 4:17 on the peloton as there was a crash going through the feed zone. O the descent from the finish Ukraine, Germany, Norway and the GB teams started to put some pressure on the front of the peloton, the French and Italians were not far from the front either. This extra speed brought back Monteiro and Bederbekov to the fold.

The US and Russian riders stretched out the bunch and saw a few out the back, notably Felix English of Ireland who was hanging on for grim death. Kanstantsin Klimiankou of Belarus attacked from the peloton, he was then chased by five others, but that came to nothing as the bunch were now being more attentive.

98 kilometres done and 5 laps to go (around 70k), Manarelli and Leonardi had 2:31 on Goincalves (Portugal) with the bunch just behind him. The pace was rising with more attacks coming from behind, the lead was down to 2:20 and the chances of the two were becoming smaller.

Norway, Germany and Belgium had men on the front, but the Italians didn’t want anyone to get an advantage. 4 laps to go (56 K) and the lead for Manarelli and Leonardi were only 1:12 on the peloton. Austrian rider; Preidler set off on his own after the Italian/Brazil tandem and was 54 seconds behind at the back climb, the bunch at 1:11. Preidler was caught by some others trying to get away, but the bunch was on them in a flash.

The bunch were not working together, there were just lots of very hard attacks from different countries and that speed was doing the damage to the two leaders up front. Bystrom of Norway was the next to try, but he didn’t get far away.

Next up was Lavery of Ireland with a giant of a Belgian; they were also caught as there was one attack after another as there was no consistency in the riding in the peloton.

126 Kilometres under the wheels (42 to go) and Leonardi and Manarelli were 31 seconds in front of the bunch. As the two leaders started the climb on the rear of the circuit they could be seen up ahead by the bunch and it was now a matter of time till they are caught.

It all came together and with a hand shake between the two leaders it was all over. Italy took over the race as there was lull in the action, Alifaci (Italy) was joined by Jensen (Norway) and Mientjes (S. Africa). They were caught by three others Berhane (Eritrea), Lindau (Sweden) and Azabayev (Kasakhstan).

The six had 34 seconds at the end of lap 10, GB were trying to split the peloton putting different riders on the front, all moves were covered by the Italians though and the lead was at 15 seconds.

148.5 kilometres ridden and the bunch could see the leaders. More attacks from the peloton was causing splits, yet again, Hoem (Norway) and Della Stelle (Italy) crossed to the six, but it didn’t help as the bunch was on them at the bottom of the finishing climb for the penultimate time. Fourteen kilometres to go!

Betancourt of Colombia had a short ride off the front to be caught and passed by Boem of Italy leading the others over the back of the course climb. The French and the Dutch wanted to make something of the race, the Italians were watching every move and a sprint was looking more than likely.

All the main countries were represented, but there were some of the smaller nations still there in the race with 5 kilometres to go there was a possibility of an upset.

3K’s to go and the Australians had a lead out train going, then Italians took over the work to keep the speed high. The GB team moved forward bring Andy Fenn to the front, but the Australians got back in the driving seat coming into the last kilo. 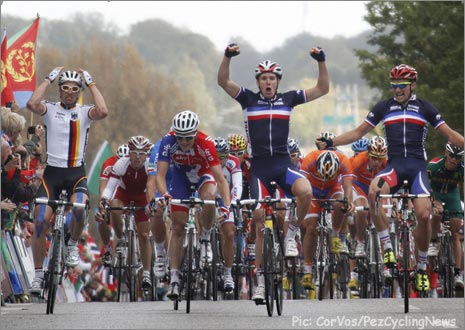 Then about 600 metres out; two French jerseys shot forward, Arnaud Damare and Adrien Petit, on their wheel was Andrew Fenn of GB and that was how they crossed the line with all the French arms in the air.

Damere said “I started my sprint 500 meters before the line and it worked. We had a plan and it worked well!” A French 1-2 couldn’t be better to prove the point.

Roadside PEZ: A Big Bunch Kick For The Espoirs