The 1986 World Championship in Colorado Springs brought giants of the road to the United States. To be seventeen years old and suddenly front row to names and faces that only existed on monthly printed pages (and maybe six hours of annual Tour de France television coverage) made it an event not to be missed.

Greg LeMond and Moreno Argentin would continue the Worlds feud they’d started in 1983, carried into 1984, and played out in a stand-off in 1985. Also, Sean Kelly was always there ready to bring his talent first across the line, and for more drama and race animation, LeMond and Hinault weren’t exactly best of friends at the moment either. After flying out from the Midwest with two other Ohio friends, race day started for us with a ride from the north end of the city to the Air Force Academy grounds and the race circuit around the military campus.

We were nearly onto the Academy grounds, riding our mountain bikes, when the Columbian team passed an intersection ahead of us and rode in two parallel lines away from us toward the start line. They were in shorts, even on the early part of the overcast day, and were quickly out of site. With high expectations we’d purchased tickets to the roped-off finish area, not knowing how the open, fan-absent course would make access to the race fairly simple. It was a far cry from the packed crowds that now cram the USA ProCycling challenge roads. 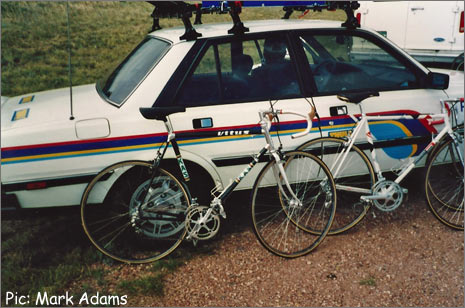 Our first moment with the race was coming across a few spare bikes on the course’s longest climb. The bike model and toe clips told me it was a ride I’d seen in magazines for the past three years. Few riders present other than Sean Kelly would fit the bike and it was one of those envied bikes that I had to get a picture of. The day continued cold and as we split up, I walked past the start-finish area to the far side of the course to get a chance to see more of the route. I got there as LeMond was riding at the front of a main field that was mostly filled with riders who had acclimated via the Coors Classic or a stage race in Crested Butte. LeMond, Hinault, and Argentin led the main field.

Sure, you’re looking at my old-school Nike’s, but I was able to pal around with the Sports Illustrated photographers enough that they let me share their stand for the view. After another lap later, Argentin was in a lead dozen riders as they road past. He was on a really cool looking Bianchi, and he’d done the work of racing the Coors as preparation, so I couldn’t help but respect his race, even as a huge LeMond fan. 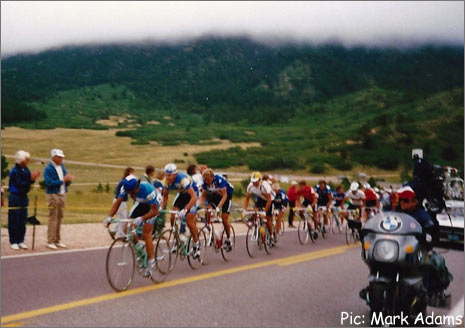 Stephan Brykt may have been riding for Sweden, but I suspect his Gewiss shorts were telling him when to ride. Another lap, and the break was staying away. 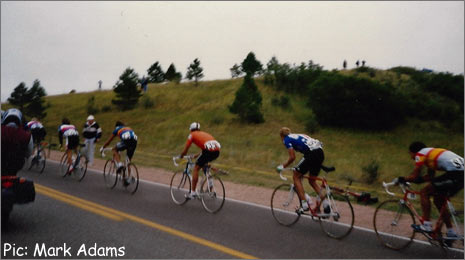 Coloradoan Keifel holding on in his USA jersey, showing lots of pride to be part of the winning break. I eventually sprinted back across the Academy grounds to get to a paying-ticket section of hillside that helped me see Argentin get the worlds monkey off his back, and deliver some payback to LeMond, who finished 7th. 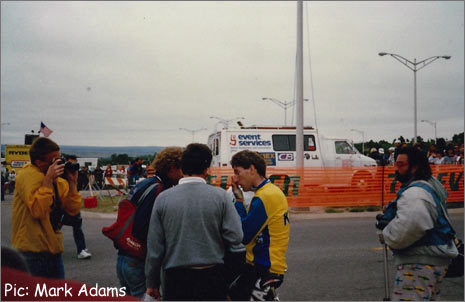 Maybe Sean talked about what he’s able to do without acclimating to elevation, or how the cold, damp conditions played to his strength. 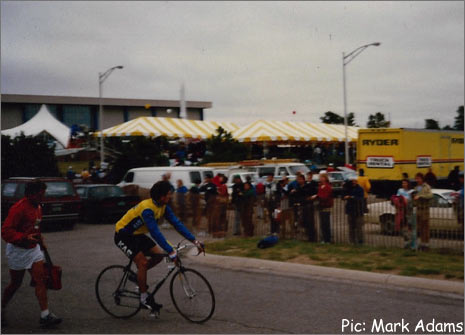 And then the interview was over, and Kelly looked for his exit.. 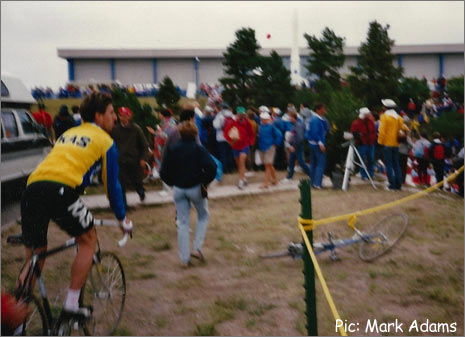 He picked his line of escape… 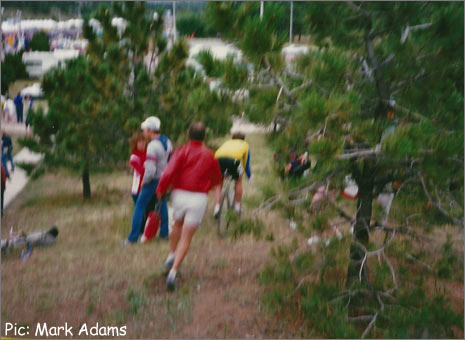 162 miles didn’t take the edge off his skills, and with only his left foot in the toe clip, he still bombs out of sight down a dirt hill, legs steady as ever. 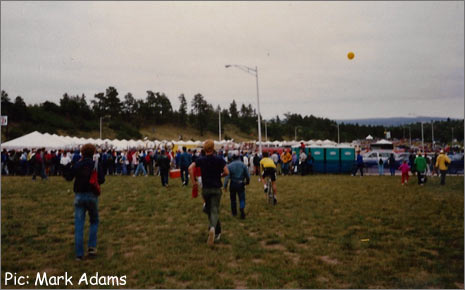 And he’s across a field… 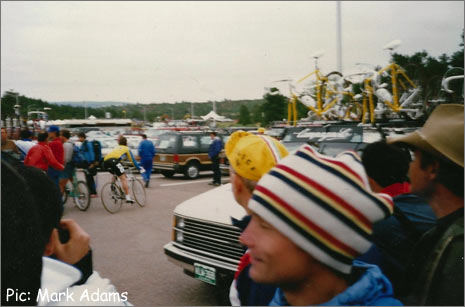 And into the cordoned off team area. Unbelievably close, and already out of sight.

The amateur races the next day were cold and nasty and wet, but I stood and shivered and didn’t care. Probably the karmic reward for that effort was running into Eddy Merckx and Patrick Sercu in the airport as we waited for our flight back to Ohio. Another “can’t believe it…” moment of the trip, especially as a Dayton girl, Janelle Parks, had taken the silver for the USA in the cold Sunday morning’s womens race.

In the full circle of life, I returned to the Academy in 2008 where LeMond gave an evening presentation on integrity in sport, and I introduced him and his wife to my son. A few years earlier Greg had indulged us to touch my wife’s pregnant belly as she carried Rourke, and there was probably some of that adoring teenage fan in me that introduced he and Kathy to my youngster. 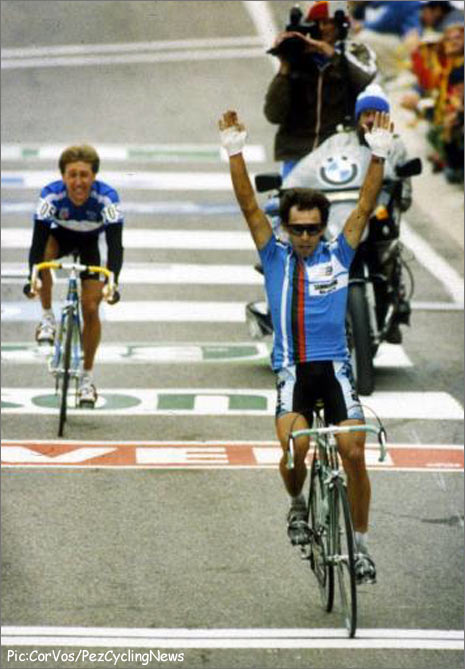 The winner on that special day in ’86, Italy’s Moreno Argentin ahead of France’s Charly Mottet.

G’DAY Suisse: What A Season!

PEZ Inside Zurich 6: The Finale!