The ‘Eureka’ moment with Bradley Wiggins came in 2009, during le Tour de France. Martin and I were at the bottom of the climb to Verbier, watching the action on a beat up TV which the enterprising owner of a roast pig sandwich stall had set up. They were all there, including Contador and Lance. It was no sparring match or flurry of token attacks, this was ‘for real’ – but Wiggins wasn’t just hanging by a thread, he was in the mix…

That afternoon, we realised there was more to Bradley Wiggins than just a pursuiter who was regularly dragged around Grand Tours as part of his endurance training.

They say of athletes that the best thing you can do if you wish to be good is to choose your parents carefully – a certain Mr. T. Phinney is a good example.

But Wiggins isn’t far behind; Gary Wiggins was one of the best six day men of his time. 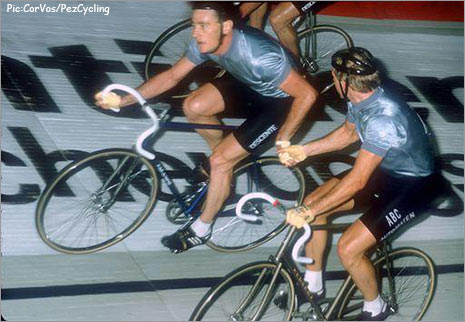 Gary Wiggins in action on the boards.

He came over from Australia with nothing, raced on the English amateur scene, turned pro, moved to Belgium, rode the kemises and by sheer force of character became accepted on the six day circuit.

Wiggins senior won the European Madison Championships with Tony Doyle – for ‘Euro’ read ‘World,’ there was no ‘Mondialisation’ in the 70’s and 80’s.

The sport of professional cycle racing was strictly European – Wiggins was one of the first outsiders to force his way on to the scene.

You’ll hear the stories that Gary used drugs during his career; at this point in the context of cycle sport in that era, we should perhaps turn to the Bible; ‘let he who is without sin cast the first stone.’

Those good genes first properly revealed themselves in 1998 when the young Bradley won the world junior pursuit title and was in the England team which won silver in the Commonwealth Games team pursuit, the same year. 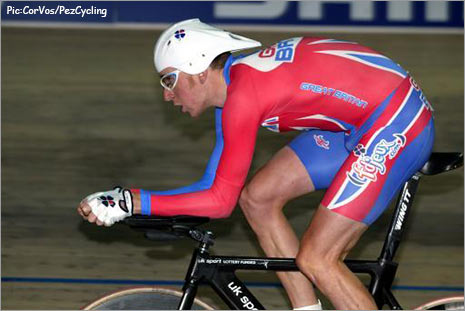 His first Olympic medal came in 2000 with a team pursuit bronze and a year later he was in the GB squad which took Worlds silver.

There was Commonwealth silver and Worlds bronze in the team pursuit in 2002 with individual pursuit silver in the Commonwealth series.

His dominance of world pursuiting began in 2003, when he took the title, adding team silver for good measure. 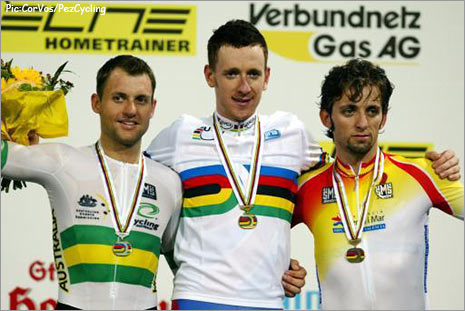 The Olympic title was his in 2004; adding team pursuit silver and Madison bronze to give him a ‘full house’ of medals.

In 2007 he ‘did the double’ – individual and team pursuit world titles.

He repeated the trick at the 2008 Worlds and added the Madison for good measure, to give him a hat trick of world titles. 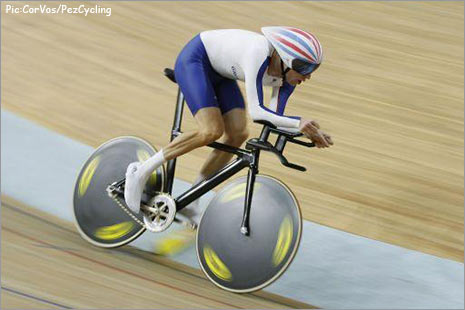 En route to the gold medal at the 2008 Olympic individual pursuit in Beijing.

The 2008 Beijing Olympics were a triumph for GB team boss, David Brailsford, the GB cycling team – and in particular for Wiggins, taking the gold in the individual and team pursuit.

And that’s where the story really begins.

In 2009, with his ride to Verbier as part of it, we saw him take fourth on GC in the Tour de France.

His early season form had been good – with a time trial win in the Three Days of De Panne; but then short time trials were something he did well and we were used to him taking the odd win in them. 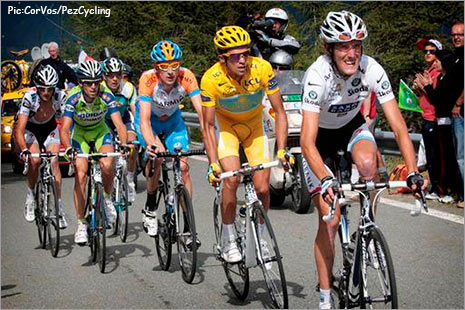 The 2009 Tour de France: the year everything changed for Bradley Wiggins.

But what was different this year was the jersey which he had on his back – that of Garmin-Slipstream. 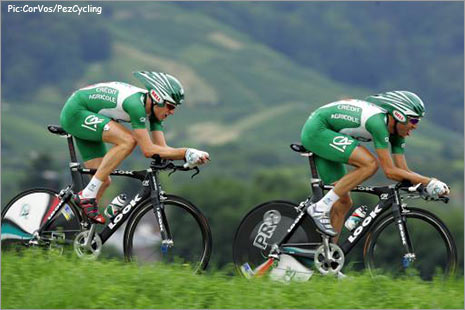 This looked like ‘doing the rounds of under achieving French team’ from where many stood.

Whilst it was good for his pursuiting in that he could be dragged around Italy and France to build core fitness, the expectation in these teams was low and the attention to fine detail – which Wiggins thrives on – was lacking.

Whilst the French teams have come on greatly in recent years, during Wiggins’ tenure the spirit of; ‘we’ve always done it this way’ prevailed. 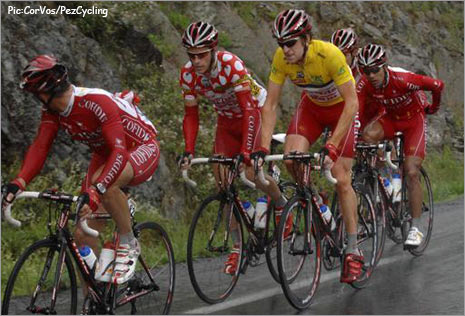 Wiggins in yellow at the Dauphine in 2007.

The final ignominy with Cofidis came during the 2007 Tour, when the Englishman was dragged off the race by gendarmes, when team mate Christian Moreni was ‘busted’ for drugs offences.

Season 2008 with HTC was all about Beijing and Wiggins left at the end of the season to avoid becoming a lead-out slave to Cav.

A couple of days every four years means little to sponsors who expect daily TV time in the Giro, Tour, Vuelta, Classics and dozens of other races which are televised across Europe.

At this point you have to decide who to believe; Vaughters says he saw Wiggins’ Grand Tour potential and that’s why he signed him, but his team captain on the road and share holder in the squad, David Millar says that they were as surprised as anyone when Wiggins soared to Verbier and emerged as a podium contender.

Wiggins was quick to realise his opportunity, especially when David Brailsford appeared on the scene with his new Sky team cheque book – backed by the Murdoch millions. 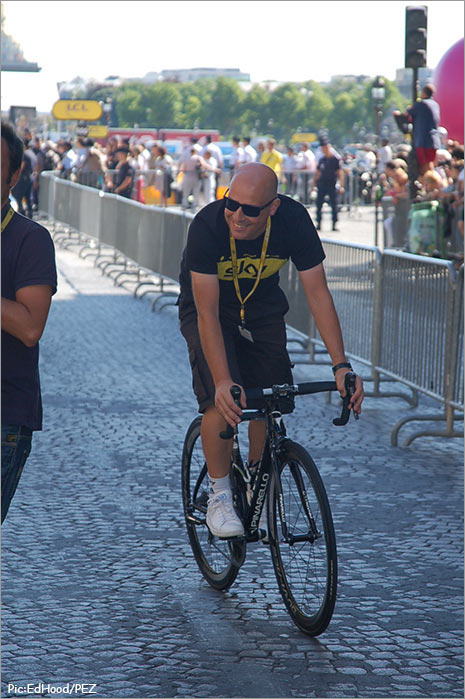 Wiggins likened Garmin to his local, sturdy but lowly soccer side, Wigan Athletic – but he needed to be playing for super squad, Manchester United to achieve his goals.

After a winter of none too dignified shenanigans, Brailsford got his man and JV banked a sum well into seven figures in lieu of the second year of Wiggins’ contract.

Sky started the season well, with Juan Antonio Flecha winning Het Nieuwsblad but that was about as good as it got. 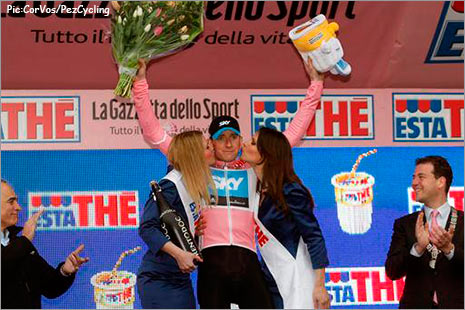 In rosa at the Giro.

Wiggins did win the prologue in the Giro and we listened with incredulity as the Sky spin machine went in to over drive about the problem they might have with Brad being well up the standings as the race approached Milan and having no option but to fight for pink, thereby over working himself in pursuit of yellow a month later.

This potential problem quickly evaporated as the maglia rosa slipped from Wiggins’ back early in the race and he slipped down the standings.

As the Tour approached, insiders and team riders told us at PEZ that Wiggins form was poor and if he made the top 20 in the race then he’d be doing well.

So it proved, with Sky’s Tour being saved by Geraint Thomas’s time in the white jersey.

It looked as if our ‘Eureka’ moment with Brad at Verbier had been a mirage – and JV had gone one up on Mr. Brailsford.

But it was at this point that Wiggins took stock and listened to GB and Sky head coach, Shane Sutton that his approach was wrong and new training methods had to be adopted. 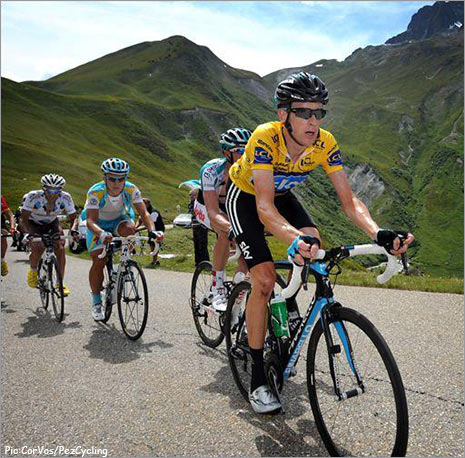 Wiggins on his way to overall victory at the 2011 Dauphine.

It was a ‘new and improved’ Wiggins for 2011 with third spot on GC in Paris-Nice, a stage in the Bayern Rundfahrt and most significantly, a GC win the Dauphine.

PEZ watched him blast the field apart in the British Elite Road Race Championships – it was apparent he was a ‘man on fire.’

But the Tour is a fickle mistress, this year she was the Englishman’s muse, in 2011 she spurned him when he came down on a tricky hairpin and broke his collar bone.

Again, Wiggins surprised – in days of yore, his season would have been over. 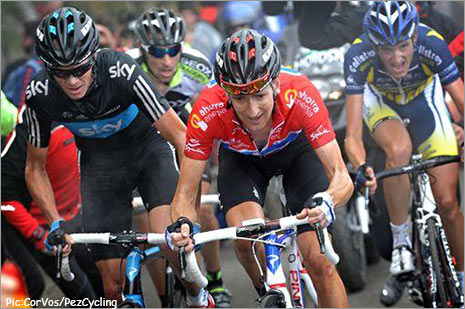 On the Angliru, en route to third overall at the Vuelta.

But he was back for the Vuelta to take third spot on the podium – we were surprised and impressed.

His silver medal to Tony Martin in the World Elite Time Trial Championship jarred our eyes even further open.

And his efforts for Cavendish throughout the Worlds road race – but on the last lap in particular – indicated that this was a very different rider to the one who could only nab the odd chrono in races like Poitou Charentes.

This season was like a rough diamond being cut facet by facet to reveal a stunning jewel – a stage win in the Algarve; the GC in Paris-Nice, with a bunch sprint win for good measure; the GC in Romandie and then the Dauphine – again. 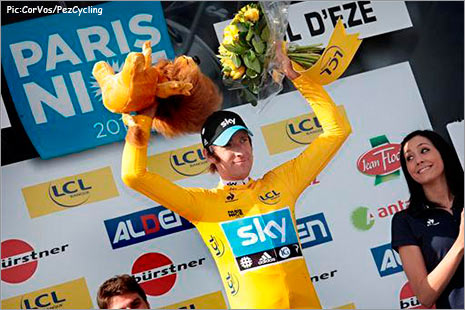 On top in March at Paris-Nice.

Coming in to the Tour, it was apparent that his only serious opposition was Evans.

But when it became obvious that the Madame Le Tour had finished with the Australian and had a new beau in the Englishman, you just knew that it was Wiggin’s race.

All those Worlds and Olympic finals had prepared him for the pressure; he had the core, the speed, the management – and the team.

Well, almost all the team – Wiggins was not happy with Chris Froome’s climbing antics.

Despite all the Sky spin, PEZ knows that there was real tension on the bus and in the hotels rooms after Froome’s climbing displays embarrassed Wiggo. 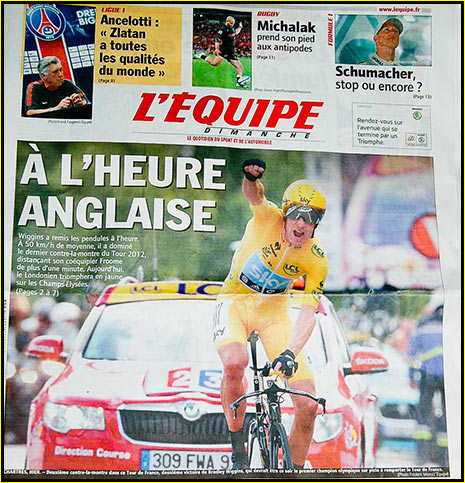 But oil was poured on troubled waters, and Wiggins firmly reminded everyone of the status quo in the last time trial.

An Englishman in yellow on the Champs Elysees; I had to rub my eyes. 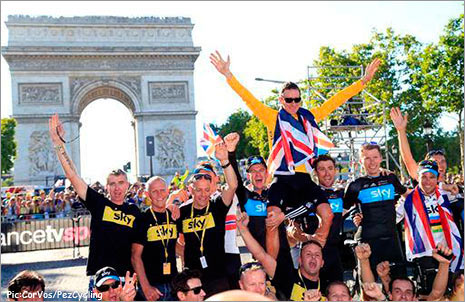 The media frenzy in the UK was unlike cycling had ever experienced before – even when Chris Hoy won his three track gold medals in Beijing.

But what the hell does ‘keirin’ mean, anyway?

And when the country’s biggest selling tabloid, The Sun (owned by a certain Mr. Rupert Murdoch) offered ‘cut out golden Brad sideburns’ to wear, we knew that the face of British cycling had changed forever. 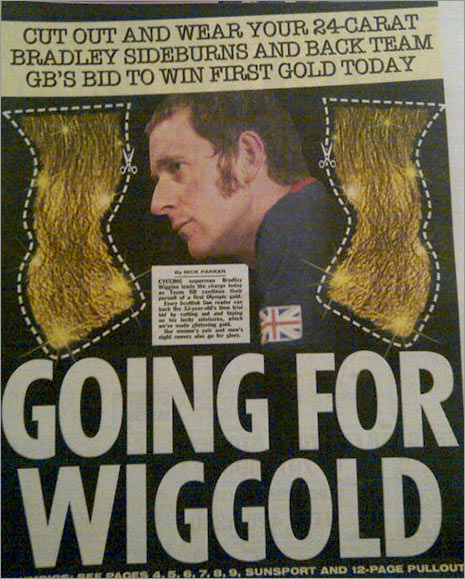 There’s little else to say, save salute an under achieving track man who re-invented himself to win the biggest prize in cycling. 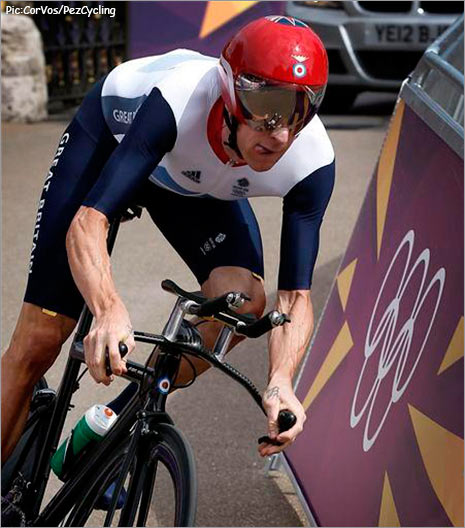 And one more salute for the alchemist, the man who turned track gold into the golden fleece of le Tour – Mr. David Brailsford.

He was right, the rest of us were wrong.