Photo Report: His second win that is… Monday’s stage 2 of the Amgen Tour of California rolled from San Fransisco to Santa Cruz, and Liquigas’ Peter Sagan took his second stage win in convincing fashion. PEZ’s Darrell Parks was on course, and here’s how it looked through his lens… 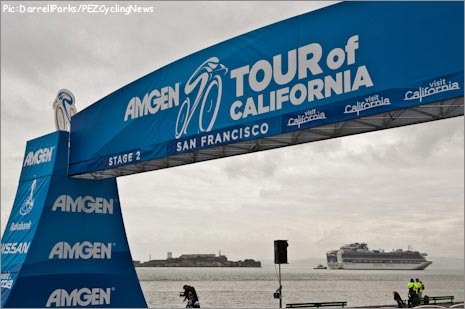 Stage start on the waterfront with Alcatraz in the distance.

– Race Report supplied by ATOC Press Office –
APTOS, CALIF. (May 14, 2012) – Young Slovakian cycling sensation and overall 2012 Amgen Tour of California race leader Peter Sagan (SVK) of Liquigas-Cannondale crashed and punctured a tire on a wicked descent, but recovered to win Stage 2 of the race in Santa Cruz, Calif., his second consecutive stage in as many days. Ironically, the punctured tire was also the second flat of the race in as many days for the 22-year-old Sagan who maintained his overall lead over Australia’s Heinrich Haussler of the Garmin-Barracuda team after the second stage of America’s greatest professional cycling race. Leigh Howard (AUS) of Orica-GreenEDGE, who placed third during Stage 2, remained in third place overall. 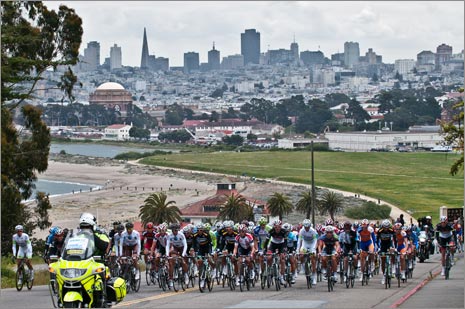 The peloton leaves San Francisco behind as the climb out of the city.

Amidst breathtaking views of the San Francisco Bay, Golden Gate Bridge and Angel Island, Stage 2 of the 2012 Amgen Tour of California got underway in San Francisco and routed south 117.1 miles over the climbs of Empire Grade and Bear Creek Road. 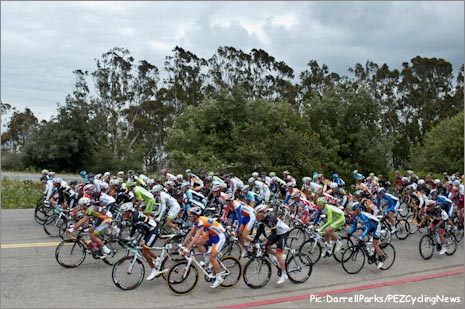 All together at the neutral roll out. 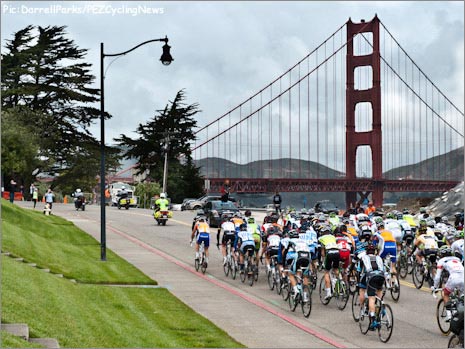 Passing in front of the San Francisco bridge.

At the start of Stage 2, after leaving the city of San Francisco, riders headed toward the coast and the first sprint of the day in Pacifica, where Howard, Maarten Tjallingii (NED) of Rabobank Cycling Team and Bradley White (USA) of UnitedHealthcare Pro Cycling Team were the first three to cross the line. Shortly thereafter, six racers, including White; Jeremy Vennell (NZL) of Bissell Pro Cycling; Michael Creed (USA) of Team Optum Powered by Kelly Benefit Strategies; Lloyd Mondory (FRA) of AG2R La Mondiale; Juan Pablo Suarez (COL) of Colombia-Coldeportes; and Alexandre Geniez (FRA) of Team Argos-Shimano established a breakaway. This breakaway swept the second sprint points with White, Vennell and Mondory crossing in that order. 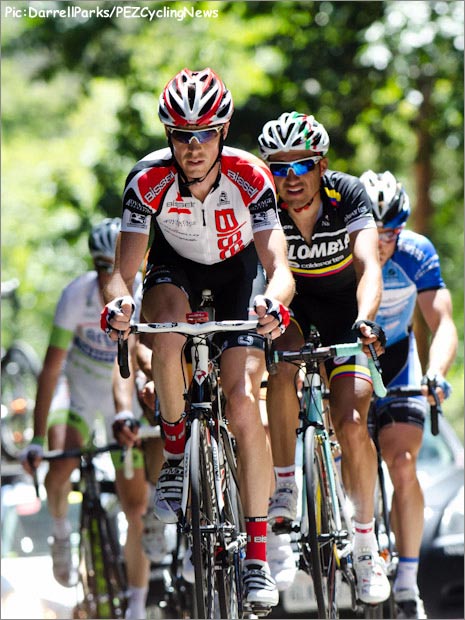 Fifty miles into the race, the break had a comfortable lead of nine minutes and 45 seconds ahead of the peloton; however, after passing through the feed zone, the group began working harder to reel them back in. As the breakaway group closed in on Bonny Doon and the first King of the Mountain (KOM) climb of the day, the gap was narrowed to five minutes and 50 seconds. As the cyclists began to climb, Garmin-Barracuda worked hard at the front of the peloton for their leader Tom Danielson (USA). After a few attacks, only three riders were left in the break – White, Vennell and Geniez – with a lead of four minutes and 20 seconds. Sitting in and out of the saddle while climbing, Geniez went out in front of the break alone. 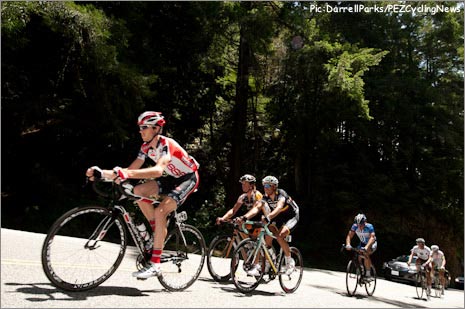 Break on the climb.

While on the climb, a crash occurred, taking down several riders, including Sagan; George Hincapie (USA) of BMC Racing Team; Laurens Ten Dam (NED) of Rabobank Cycling Team; Andres Diaz Corrales (COL) of Exergy; and Josh Atkins (NZL) of the Bontrager Livestrong Team. Sagan showed what he is made of by getting up quickly from the crash, brushing himself off and regaining contact with the peloton. While this was happening, Geniez continued to ride alone at the front with a lead of four minutes and 55 seconds ahead of the group, and ultimately claimed top KOM points on Empire Grade. He was followed by David Boily (CAN) of Spidertech Powered by C10. 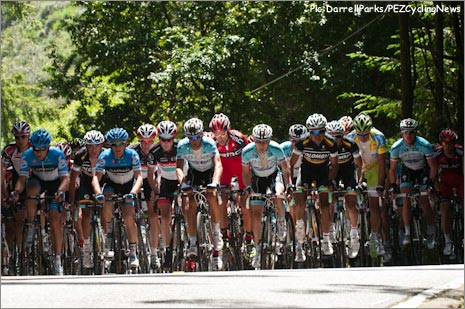 Peloton on the lower slopes of Bonny Dune.

With five riders at the front of the peloton, Garmin-Barracuda began flying down the mountain with a gap of three minutes and 55 seconds off the front. Vennell and White hung together, in between Geniez and the peloton. After the decent, the peloton was split with about 25 racers in the first portion, then about a 30-second split to the main peloton. Just before the Bear Creek climb, Vennell and White were absorbed by the peloton, leaving Geniez alone in front. But, with just 35km to go, Geniez was caught by the peloton, which was being led by UnitedHealthcare Pro Cycling Team. 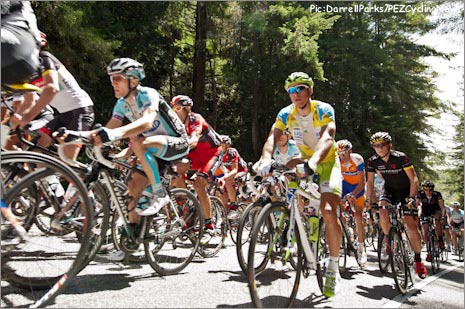 Levi and Sagan stay near the front on the climb. 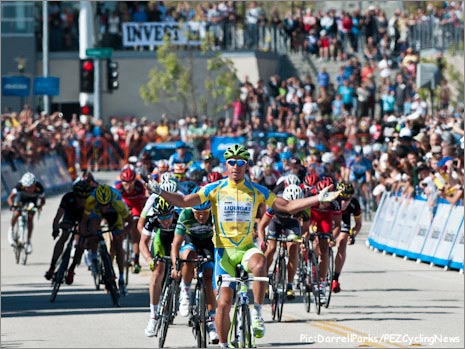 Sagan easily wins the sprint in front of huge crowds.

“I don’t know, maybe it takes a natural disaster,” said Sagan, when asked what it would take to stop his winning ways, noting he suffered an untimely punctured tire three miles from the finish yesterday and still won Stage 1. “I am feeling good. I will see tomorrow (to make it three straight wins),” he continued. 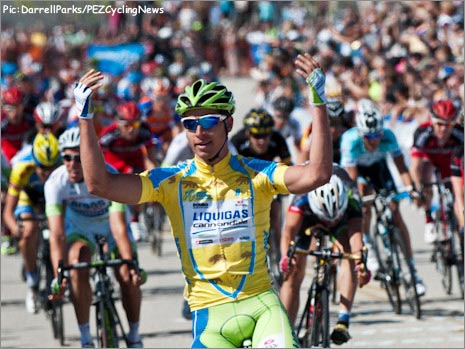 Sagan makes it 2. how many more will he get?

Liquigas-Cannondale took over work at the front of the peloton, controlling the pace on the last bit of uphill before the major descent. Heading toward the final sprint of the day, Maxime Bouet (FRA) of AG2R La Mondiale attacked, but Marc de Maar (AHO) of UnitedHealthcare Pro Cycling Team claimed the top sprint points. With 17km to go, the peloton was flying toward the finish with Liquigas-Cannondale riders occupying the top four spots at the front, followed by riders from Rabobank, BMC Racing Team and RadioShack-Nissan-Trek. 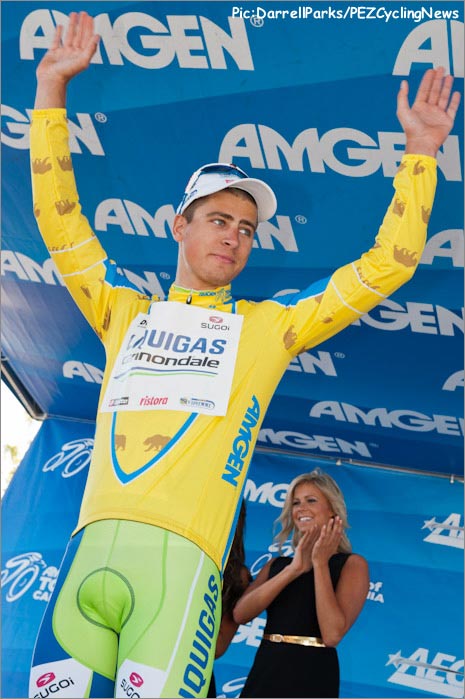 Sagan in yellow for another day.

Even with an attack by Rory Sutherland (AUS) of UnitedHealthcare Pro Cycling Team at the finish, Sagan managed to outsprint the pack to take the Stage 2 win. He was followed by Haussler and Howard to round out the top three for the stage. 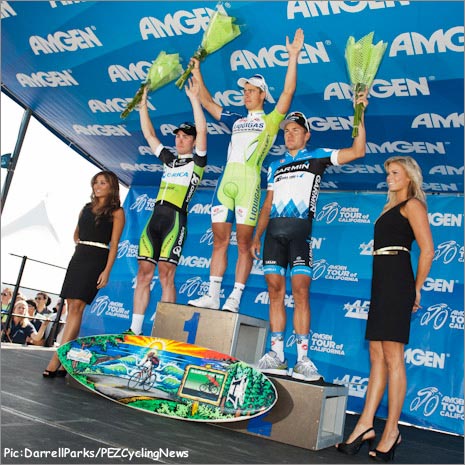 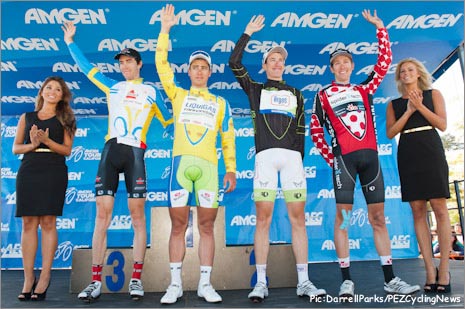 “It was a very hard day,” said Vennell, a former National Time Trial champion of New Zealand. “The descent off Bonny Doon was pretty scary.” 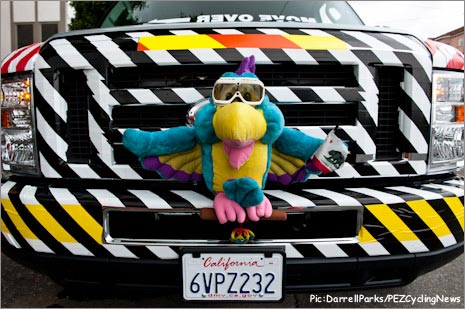 14 = ATOC Mascot has been in all tour of Californias.

Leader jerseys at the end of Stage 2 remained somewhat similar to Stage 1, with Sagan remaining in the Amgen Race Leader, Visit California Sprint and Rabobank Best Young Rider Jerseys. As with yesterday, since Sagan will be wearing the Amgen Race Leader Jersey at the start of tomorrow’s stage, the Visit California Sprint Jersey will be worn by Haussler and the Rabobank Best Young Rider Jersey will be worn by Atkins. Boily still wears the polka dot Nissan King of the Mountain jersey. Vennell claimed the Amgen Breakaway from Cancer® Most Courageous Rider Jersey, and Geniez secured the Exergy Most Aggressive Rider Jersey.