Photo Report: Sylvain Georges of AG2R La Mondiale took an impressive win on his own, while Dave Z held on to Yellow. PEZ’s Darrell Parks captured all the action of stage 6 here…

Someone tweeted to Jens that they would make him cookies if he came to race the ATOC this year. He was tweeting that the promise was never kept, so the AToC gave him some cookies at the start.

Race Report supplied by Tour of California Press Service
BIG BEAR LAKE, CALIF. (May 18, 2012) – Sylvain Georges (FRA) of AG2R La Mondiale won Stage 6 of the 2012 Amgen Tour of California in thrilling fashion, riding solo out in front of the break for a majority of the finishing stretch and crossing the line in front of thousands of screaming fans who were cheering him on.

The Frenchman, overcome with emotion after such a grueling stage, crossed the line with his hands in the air, but quickly collapsed into the arms of his teammates after holding off a charging peloton that included race leader Dave Zabriskie (USA) of the Garmin-Barracuda team and Peter Sagan (SVK) of Liquigas-Cannondale, who has won four stages of this year’s race and finished second Friday. 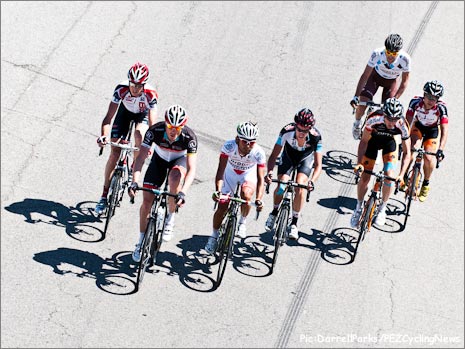 The break of 7 formed early.

Stage 6 took riders from Palmdale to Big Bear Lake, repeating a similar route from the 2010 edition of the race. A fan and rider favorite, the stage featured four King of the Mountain (KOM) climbs and two sprints before finishing at the Snow Summit ski area, more than 7,000 feet above sea level.

The attacks came fast and furious at the start of Stage 6 in Palmdale. Right away a break formed, including Gregory Rast (SUI) of RadioShack-Nissan-Trek; Mikael Cherel (FRA) and Georges of AG2R La Mondiale; Yukihiro Doi (JPN) of Team Argos-Shimano; David Boily (CAN) of Spidertech Powered by C10; Jeremy Vennell (NZL) of Bissell Pro Cycling; and Andrew Bajadali (USA) of Optum Powered by Kelly Benefit Strategies. 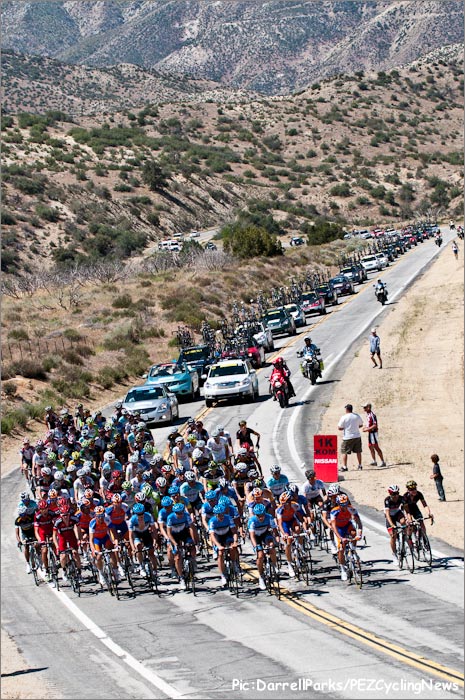 The peloton started climbing shortly after the start. 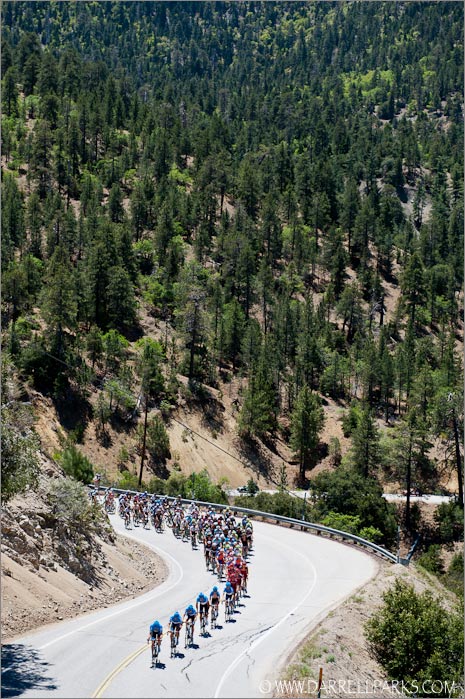 The race was either climbing or descending with few flat roads in between.

As the break reached the first climb of the day – Mt. Emma – they had a three minute, five second advantage on the peloton. Boily picked up maximum King of the Mountain Points (KOM) after crossing the line first, followed by Sebastian Salas (USA) of Optum Powered by Kelly Benefit Strategies, Bajadali, and Rast. After the decent from Mt. Emma, the break increased their lead over the peloton, stabilizing around seven minutes, 15 seconds about 13 kilometers from the second climb. As the break reached the top, they had increased their lead to a solid eight minutes, as the peloton clipped along comfortably.

At the top of the second KOM, Salas attacked and Boily couldn’t keep up. Bajadali countered, edging out Boily, forcing him to cross the line third, while Rast crossed shortly thereafter. On the decent, the riders picked up speed and the gap narrowed to six minutes, 33 seconds. As the race rolled along Highway 15, there were a few attempted attacks, but none that stuck. The gap stabilized at six minutes, 20 seconds. 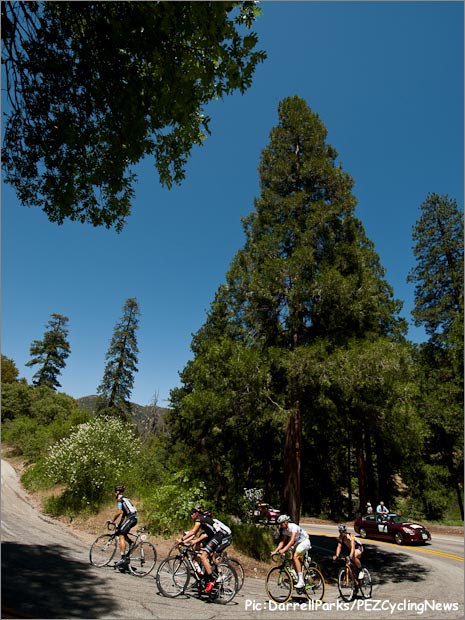 The course went by some towering redwood trees.

Salas drove the break to the top of the third KOM of the day, crossing first, followed by Boily, Bajadali, Doi and Georges, further fueling the fight for overall KOM points between Salas and Boily. After a short sprint competition, the gap was four minutes, five seconds, and Vennell began fading off the break while Boily and Salas turned up the heat as they worked toward the next KOM of the day. Boily couldn’t keep up the rapid pace, leaving Salas to go forward with Georges and Doi. Liquigas-Cannondale, working for initial race leader Sagan, pedaled hard at the front of the peloton. 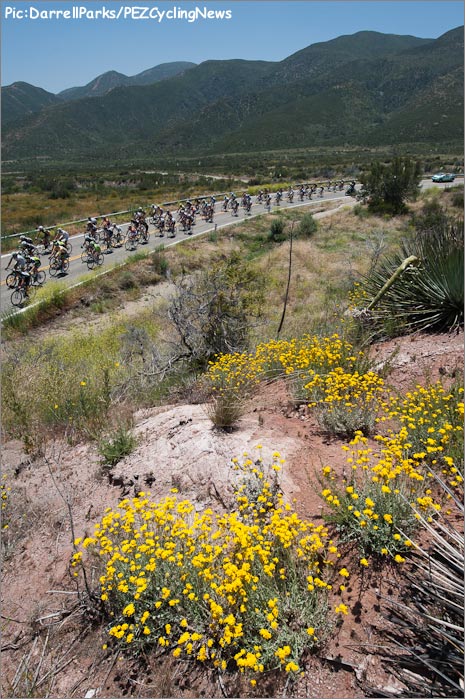 Wildflowers were abundant in many places.

Salas reached the fourth and final KOM of the day first, all but securing the Nissan King of the Mountain Jersey for good, followed by Georges. The peloton remained behind with a gap of four minutes, 45 seconds, Liquigas-Cannondale still working hard at the front. As the peloton crested the climb, it was Georges who rode out in front solo, with Rast, Salas, Vennell and Doi working together to reel him back. However, Georges worked up a two minute, 10 second lead on Rast and Vennell, and a three minute, 10 second lead over Salas and Doi. The break stayed at five minutes, five seconds ahead of the peloton.

Garmin were on the front all day long.

Showing incredible resolve, Georges continued to go it alone at the front, working four minutes, 50 seconds ahead of the peloton. Salas and Doi were pulled back as Pieter Weening (NED) of Orica-GreenEDGE went out on the attack. Garmin-Barracuda and Liquigas-Cannondale continued to work hard at the front of the peloton as Wilco Kelderman (NED) of the Rabobank Cycling Team counterattacked Weening. As the peloton inched closer to Vennell and Rast, Vennell dropped back. Georges was still four minutes, 10 seconds up the road.

The peloton rides by Silverton Lake. 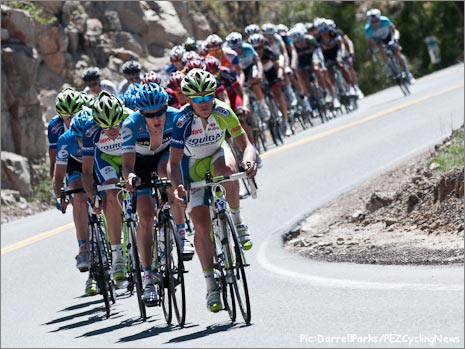 Liquigas joins Garmin in pursuit of the break.

Sylvain Georges Climbing his way to a stage win.

“The gap Sylvain was holding was pretty impressive,” said Zabriskie. “A lot of other teams came up to help, and my team was amazing all day. We got the gap down enough in the end. Hats off to this guy [Sylvain Georges].”

Weening caught and passed Rast, so he began working with Kelderman to catch Georges, but there was no catching him. As the chasers were caught, Sagan, Jens Voigt (GER) of RadioShack-Nissan-Trek and Peter Velits (SVK) of Omega Pharma-QuickStep launched one last attack, but Georges remained one minute ahead and crossed the finish line alone, arms raised in triumph.

When asked about keeping the yellow Amgen Race Leader Jersey, Zabriskie continued, “I expect people to attack me. That’s pretty much the only way they’re going to win. I expect me to try and follow and try to retain this jersey and my dream.”

After putting in a tremendous effort on the climbs, Salas remains in the Nissan King of the Mountains Jersey. Also retaining jerseys at the end of Stage 6 were Sagan in the Visit California Sprint Jersey and Luke Durbridge (AUS) of Orica-GreenEDGE in the Rabobank Young Rider Jersey. Timothy Duggan (USA) of Liquigas-Cannondale won the Amgen Breakaway from Cancer® Most Courageous Rider Jersey.

“This is the fifth win of my career – but the biggest win of my life,” said Georges at a post-race press conference. “This is also my biggest win with the biggest team I’ve been a part of. I thought I’d tempt fate on the second KOM because I knew I had the legs, and from that point on, it was all or nothing. I held it in my head and was able to hold it until the end.”

With only two stages remaining in this year’s Amgen Tour of California, Zabriskie holds a 34 -second lead over fellow American Tejay van Garderen of the BMC Racing Team heading into Saturday’s decisive mountainous stage from Ontario to the summit of Mt. Baldy.

After a grueling day of racing, Georges walked away with the Stage 6 win, followed by Sagan in second and Velits in third. Georges was also awarded the Exergy Most Aggressive Rider Jersey for his impressive efforts. General Classification standings after Stage 6 remained nearly the same, with Zabriskie in the yellow Amgen Race Leader Jersey, van Garderen in second and Robert Gesink (NED) of the Rabobank Cycling Team moving into third.