Photo Report: Downtown Los Angeles hosted the final stage of the Amgen Tour of California, where Rabobank’s Robert Gesink claimed the overall, and Liquigas’ Peter Sagan stole the daily show for the 5th time this race. Darrell Parks captured all the action…

The break from 15 stories up. 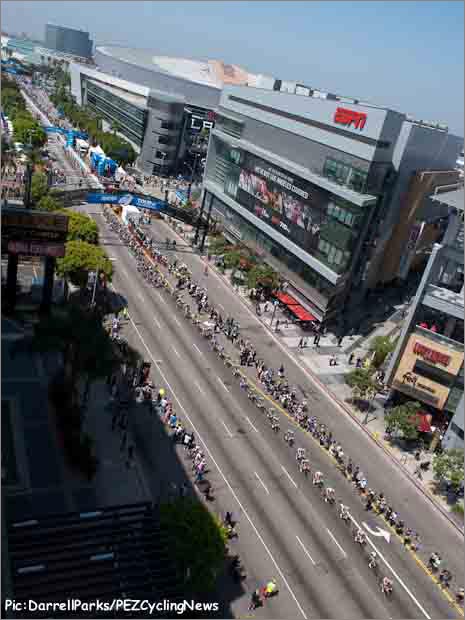 Race Report supplied by Tour of California Press Service
LOS ANGELES (May 20, 2012) – After eight epic days of racing along some of California’s most iconic roadways, highways and coastlines, the 2012 Amgen Tour of California concluded at L.A. LIVE in downtown Los Angeles, with Rabobank’s Robert Gesink of the Netherlands winning the overall race.

Sunday’s Stage 8 route, the final stage of the eight-day, nearly 750-mile race, took cyclists from Rodeo Drive in Beverly Hills to L.A. LIVE in Los Angeles where massive crowds lined the streets. In one of the fastest races ever on American soil, rising superstar Peter Sagan (SVK) of Liquigas-Cannondale won Stage 8, claiming his fifth win of the 2012 Amgen Tour of California, a historic first for an American race. Tom Boonen (BEL) and Gerald Ciolek (GER), both of Omega Pharma-QuickStep, came in second and third in the stage.

The peloton comes through the finish on the first of 5 circuits.

The break hammers through the first turn.

Before the start of yesterday’s stage, which routed cyclists from Ontario to the top of Mt. Baldy, the race was anyone’s game. After a climactic finish atop Mt. Baldy, in which Gesink outclimbed Colombian Jhon Atapuma of Colombia-Coldeportes with less than one kilometer to the finish, Gesink had all but wrapped up his place as overall race leader.

Dave Z flexes his muscles on one of the circuits.

Signaling from the start that this would not be a typical “parade stage,” Michael Creed (USA) from Optum Powered by Kelley Benefits Strategies attacked off the front early in the stage. But it was a break including the following seven riders that stuck and gained a 45-second lead: American Ben Jacques-Maynes; Rory Sutherland (AUS) of UnitedHealthcare Pro Cycling Team; Thomas Dumoulin (NED) of Team Argos-Shimano; Scott Zwizanski (USA) of Optum Powered by Kelley Benefit Strategies; Morgan Schmitt (USA) of Team Exergy; Jasper Stuyven (BEL) of Bontrager Livestrong; and Nathan Haas (AUS) of Garmin-Barracuda. It was Gesink’s Rabobank Cycling Team that worked hard at the front of the peloton. 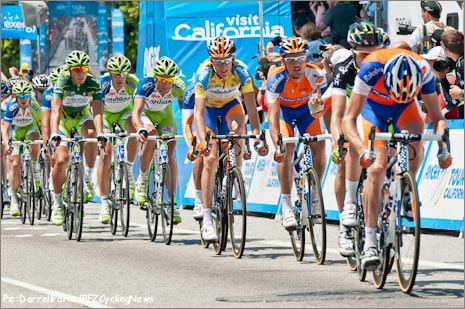 Rabobank keep Gesink well protected at the front of the group.

With the gap holding at 35 seconds, the riders entered the finishing circuits in downtown Los Angeles. Sutherland, Schmitt and Jacques-Maynes swept the intermediate sprint points as the gap was reduced to 25 seconds. With four laps to go, GreenEDGE moved to the front of the peloton. The breakaway group stayed steady with the seven initial riders, but the gap was closed to 15 seconds.

The finish takes the rider past the iconic LA live compund.

With two laps to go, Garmin worked up to the front, and Omega Pharma-QuickStep began working Boonen, the world’s No. 1-ranked cyclist, up as well. As the riders neared the finish, the attacks started flying, but it was only Haas’ that stuck, gaining a 17-second advantage on the pack. However, Liquigas-Cannondale and Rabobank moved to the front the peloton, and Hass was eventually caught.

Sagan’s team began pushing him to the front, and although Boonen had a great lead, it was Sagan who, once again, outsprinted everyone to capture the Stage 8 win. 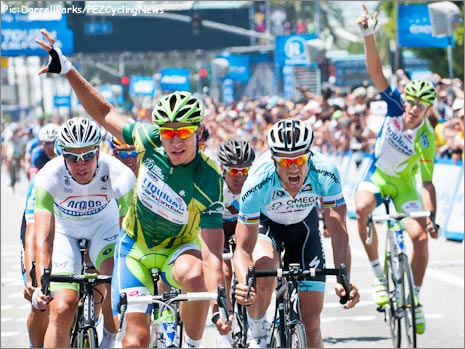 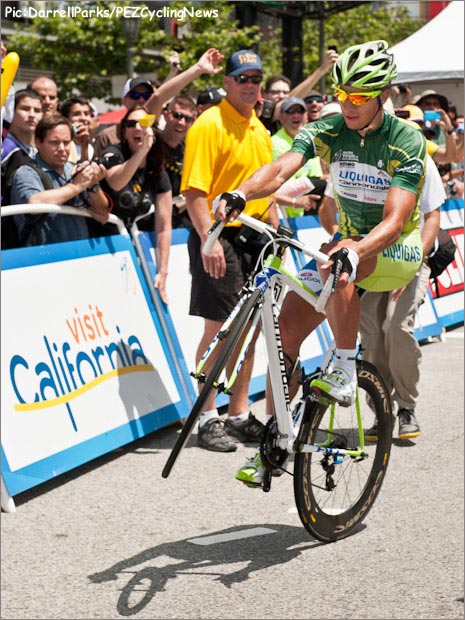 Sagan wheelies back to the podium ceremonies.

Boonen gave Sagan a run for the money but miss judged the finish line with an early bike throw.

Gesink gets the GC.

For Gesink, the win marked a both a remarkable comeback and bittersweet win in remembrance of his father, who passed away after a cycling accident in October 2010.

“I dedicate this win for my father,” said Gesink, who said his father attended the 2009 Amgen Tour of California to see his son place 8th overall and win the race’s Best Young Rider jersey that year. “For me emotionally it is something really big to be back at this high level and to win a stage here, the toughest stage of all. It’s a good thing to be back in California and to be winning again.” 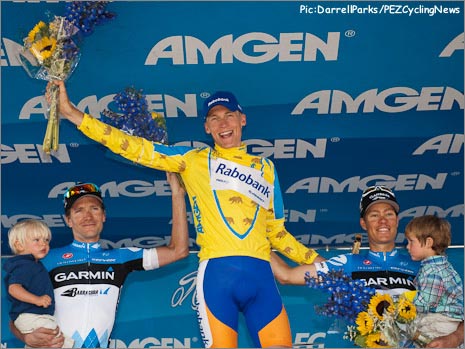 Garmin picks up the rest of the GC with Dave Zabriskie and Tommy D.

American teammates David Zabriskie and Tom Danielson of the Garmin-Barracuda team took second and third place overall. It was Zabriskie’s fourth second-place finish in America’s Greatest Race, having finished second in 2006, 2009, 2010 and 2012.

“Sure, I’d like to win, doesn’t anyone?,” said Zabriskie. “But it was a good tour for the Garmin-Barracuda team.” “Emotionally, the time trial was the high point,” continued Zabriskie. “I came through with a win there and it was really, really good; really strong. I knew what I had to do yesterday at Mt. Baldy. I didn’t quite have it because this guy [Sagan] is really, really strong.”

The break from 15 stories up.

“I’ve had a fantastic run; pain and suffering too,” said McEwen. “I had a terrific send-off in Australia and a fantastic send-off here in California, so I really appreciate it. This was a good race to pick as my last because I suffered so much this week I won’t miss it. “I was really pleased to be included in the final presentation on the podium and receive the beautiful work of art that signifies my career. And, to have so many people thank me for riding my bike was really amazing.”

Robbie Mac used the AMGEN Tour of California as his final race.

THANKS to everyone for tuning in to our photo reports – we hope you enjoyed Darrell’s pics as much as we did presenting them.