After three nights, the racing was anything but decided. The same theme would continue all the way until the final, sixth, evening. Bremen’s racing was a barn-burner in 2012, so let’s go back and see how it shook out. Read on!

Day Four
I didn’t realise that the singer had changed, I thought it was still the yodeler in action but Pete Jacques to the rescue; ‘there’s a Major Toms guy on stage, now!’

And sure enough, there was a guy with a cosmonaut meets abattoir attendant vibe going on. 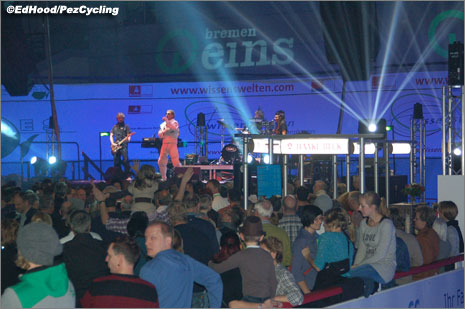 But damn! those white rubber boots must have been hot – and I’m sure those were oven gloves he was wearing. 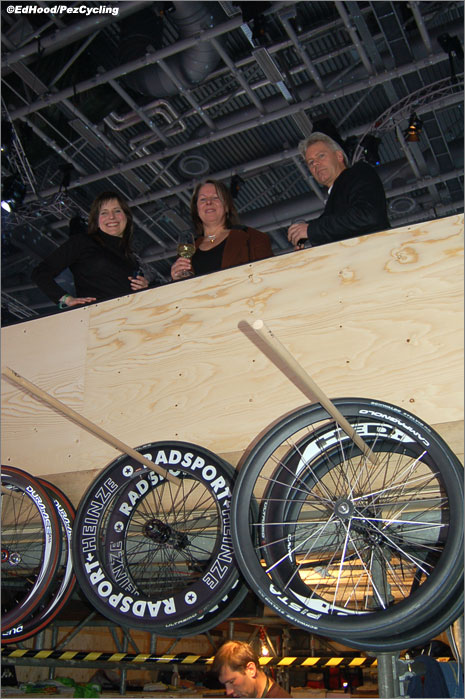 The girlie trio were good, they looked the part and their version of Nena’s ’99 luftballons’ wasn’t bad at all.

Pete Jacques was in heaven.

The racing ? as you’d expect for a Sunday afternoon. 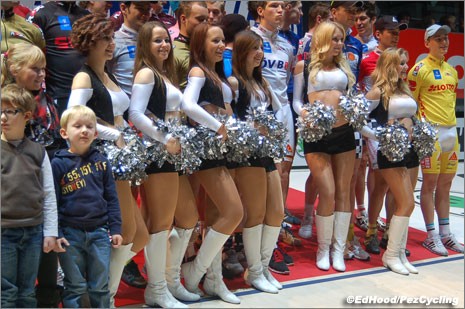 But the sparkly cheer leader girls were a treat and a good photo opportunity to lift the morale.

And still with the girls – Marc Hester’s daughter came to visit; she’s a cutey ! 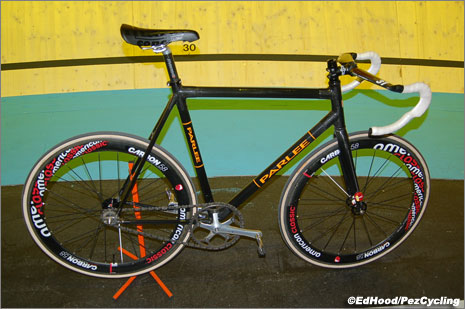 I like the lugged carbon construction and the neat fork ends: if I had one little gripe – I hate to see steerer above the extension.

Jackie has gone down the ‘Sphinx’ route, although I notice that Danny Stam has come away from them, here.

It was an early night for us, edit the pictures, have a beer in the camper and bed before midnight. 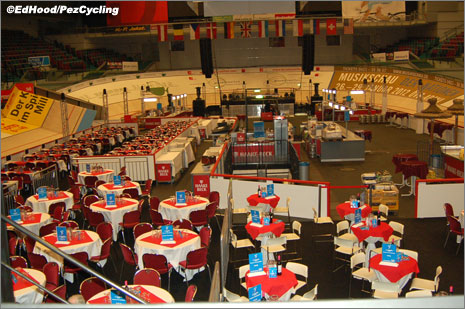 Monday’s chase ? it’ll be a toughie.

Day Five
I interviewed Brad Huff today, former US amateur and elite criterium champion, he’s a double Pan-Am Champion, has World Cup podiums and a bronze in the Worlds omnium to his name. 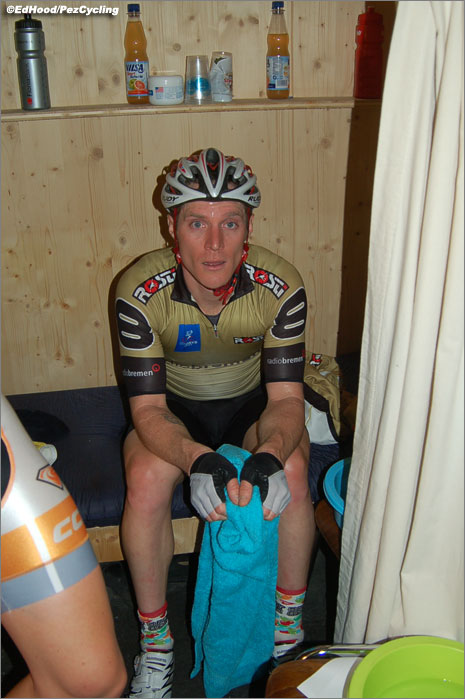 Add that to a stage win in the Tour of Normandie and a batch of high placings in Asian UCi races and you have solid palmares.

He’s finding his legs here in the rough and tumble but reckons it would be nigh on impossible to come straight from the road into a six like this one.

He says that the experience he has from Pan Ams, World Cups and World Championships has proved invaluable – I believe him.

Brad and partner Ralf Matzka have been getting better every night in the time trial – tonight they changed the firing order with Brad giving the sling and Ralf doing the solo thing.

Brad flew the launch and Ralf couldn’t quite hold the wheel; when Brad looked back to make the sling there was a delay as Ralf got on terms. 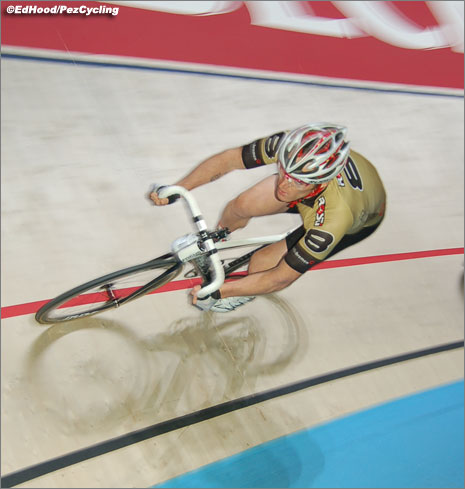 The German motored, but the damage was done – 28.5 made them fastest but it was eventually only good enough for third.

Marvulli/Kalz blasted to 28.2 to win – I still reckon Brad could have won it given one more shot.

But there’s no TT tonight, shame. 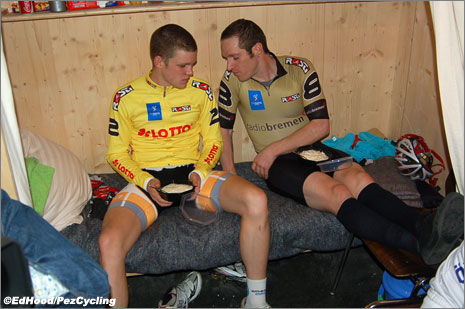 I trotted round with Franco’s hat and towel for the 500 presentation; ‘I don’t need the towel,’ he told me; ‘I didn’t sweat !’ 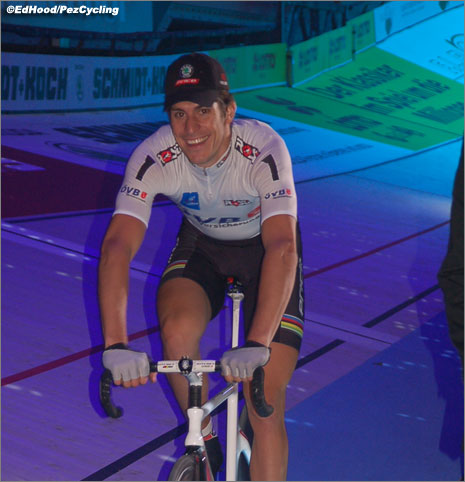 We go straight into the Derny and I’m pushing off Jesper, he’s third in the string, that’s not so bad, the further back the string you go, the more difficult it is, it’s like being back the string in a criterium, the leaders are sprinting flat out of a corner and there are still riders freewheeling into it. 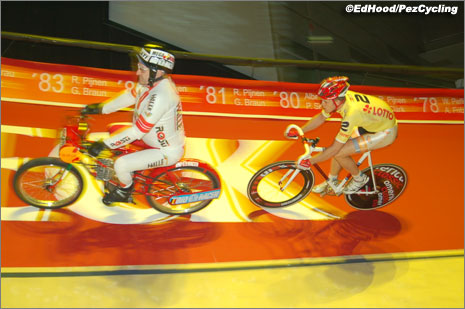 Jackie Simes hard at work behind the derny.

Sometimes it’s hard to keep up to date with what’s happening on the track, drinks to make, messages to run to the cabin, floors to clean, bottles to fill, riders to change – and guys who are paying you don’t want to see peering into a BlackBerry and/or scribbling into a notebook when you’re supposed to be looking after them.

I jotted down notes during the big chase, though.

First of all, Brad has renamed the venue; ‘Republic of Bartko’ – only Franco hasn’t adhered to Swiss neutrality and is making things tough for the former double Olympic champion from Potsdam. 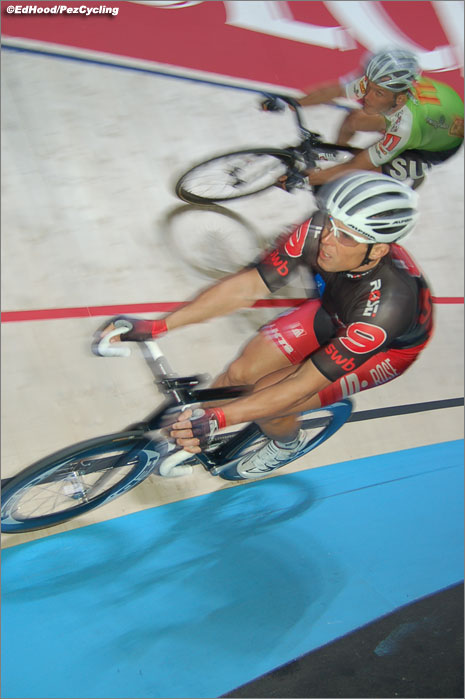 The little teams took back laps when they could but when the big guns were firing, there was no chance.

Jesper took his chances and looked good – his partner less so.

Jackie and Brad too grabbed laps when they could but there were spells of real super speed and for the mortals, survival was the only goal. 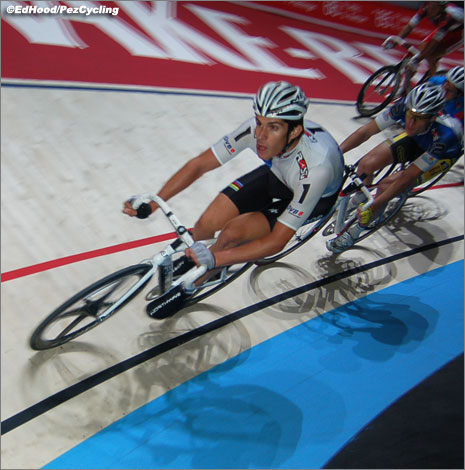 One wonders where the ‘experts’ who say that six days are all ‘fixed’ are when the hammer is down like this and men are fighting for dear life in the Bartko/Schep/Keisse/Lampater/Marvulli maelstrom.

Jackie and Brad both lost five laps, despite their gains.

Franco and Kalz took it and the TV descended up on us – hectic. 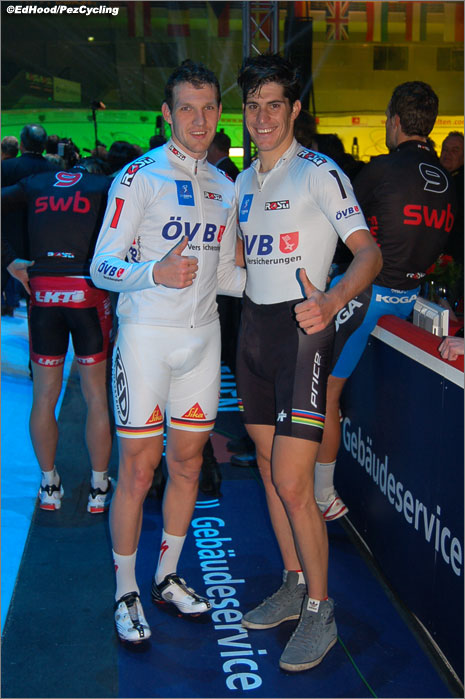 There was a Rammstein kinda vibe going on with the music, tonight; but then the live band was Rockabilly – light and shade.

We missed the late Dernys – thank you God – but Franco had more interviews to do, in the cabin. 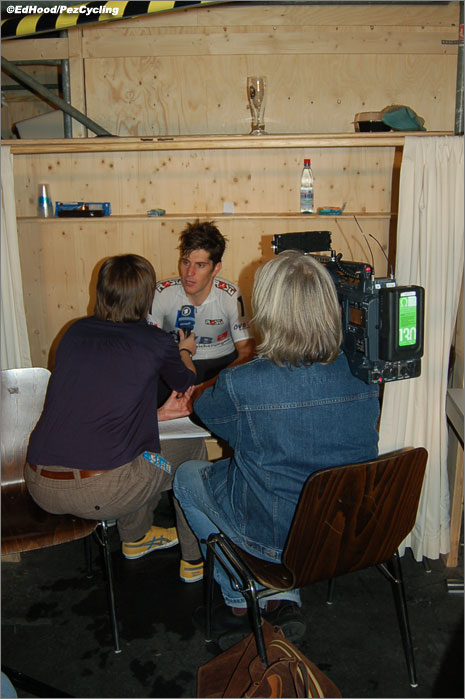 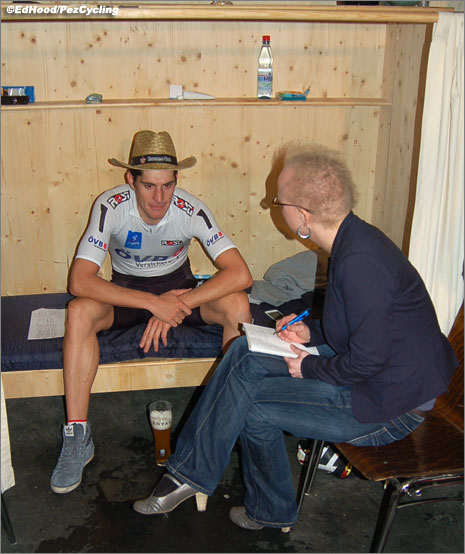 And it’s one big day, tomorrow.

Day Six
Bremen Airport 05:55, we had two hours sleep in the camper van – we’re checked in to the 06:30 flight to Edinburgh, a proper bed and home cooking.

Franco and Kalz finished second to Bartko/Schep with Lampater/Keisse in third spot.
The only surprise for me was how well Kalz rode – lifting himself to Franco’s level, strong in the chase, scorching in the time trials. 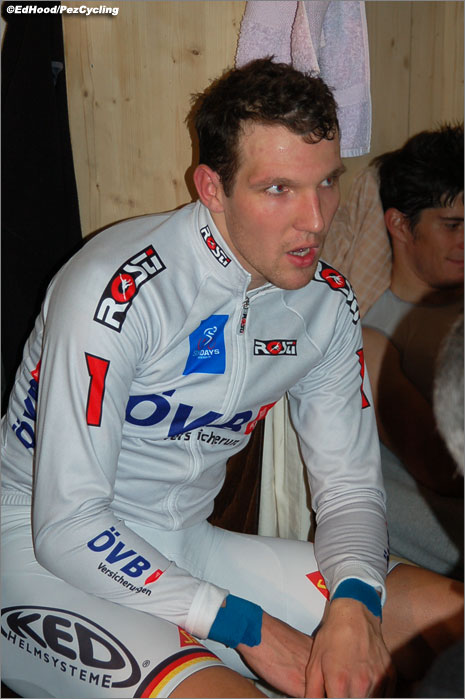 The time Franco spent working on Kalz’s self confidence was well spent.

And Franco is ‘Marvellous’ again – he was ‘flat’ at Gent, we were worried about him but is back to his old self, driving Kris and me crazy – it’s like that when you’re family, I guess ? 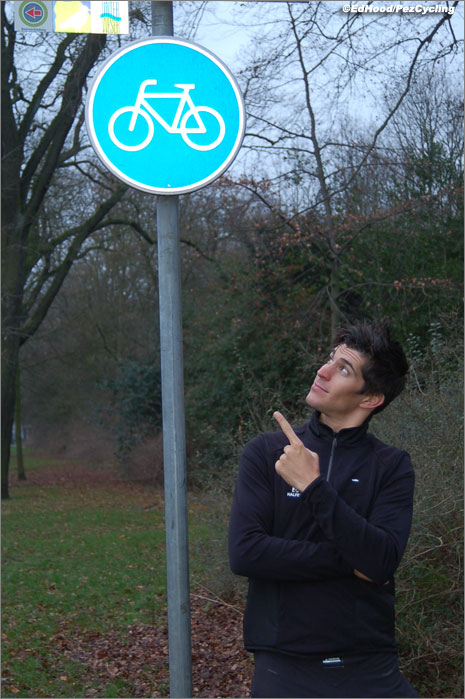 Marvellous at his best.

A good venue, decent crowds, with good racing – although I thought the chases at Rotterdam were better, but that’s just me.

Our boy Jesper Morkov did his rep no harm with the job he did, here – now well established in the ‘middle group’ of riders he was visibly stronger than his German partner, Thommel on all counts. 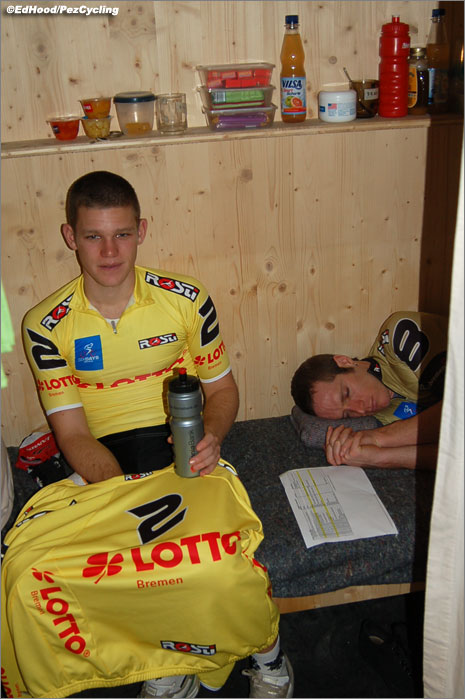 Simes and Huff were solid.

Our Americans, Brad Huff and Jackie Simes performed very well given that they came from a diet of little racing, had never ridden a six of this intensity before and picked the hardest track on the six day circuit to master.

It was Schep who launched the big attack which led to their making contact with the tail of the peloton with seven laps to go.

Franco and Kalz had a superior points total but it was too late for them to counter Schep/Bartko’s lap gain. 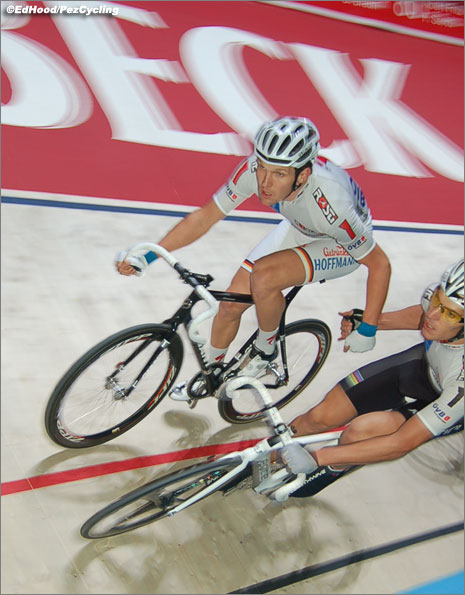 Schep’s late move was too much for Kalz and Marvulli to come to terms with.

Schep is one of the smoothest performers on the boards, but his silky style disguises a scintillating turn of speed.

Bartko may not quite be ‘The Terminator’ of old, but he’s still hugely strong with massive reserves.

As I said, the resurgence of ‘Marvellous Marvulli’ continues – his attacking, cavalier style, affinity with the crowd and sheer speed mean he’s still one of the very best. 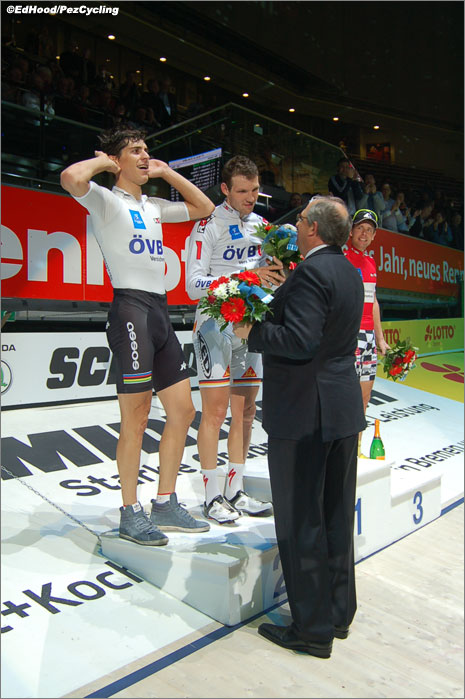 Keisse has been the man of the winter, strong, fast, stylish; I’m looking forward to Gent 2012 already, with Iljo back to the race he loves and the city which adores him.

But let’s not forget the team in fourth place, Andreas Muller (Germany) and Marc Hester (Denmark).

Muller is looking sharp this winter and well capable of being more than just the ‘taxi driver’ for riders new to the boards, which has been his role hitherto. 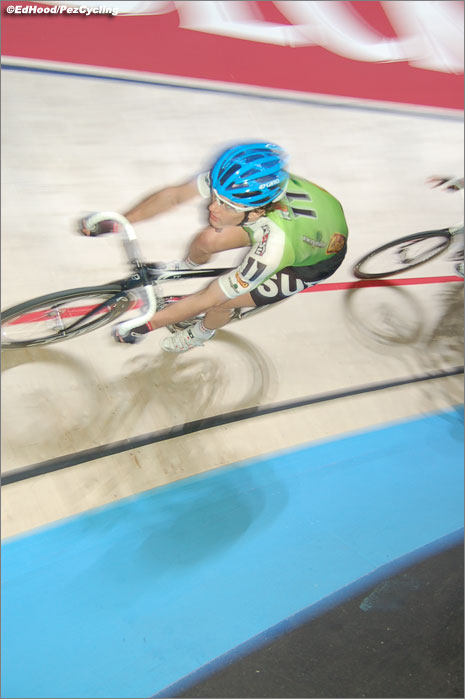 Hester is not yet in his late 20’s but has ridden almost as many six days as Bartko; last year was his break through with several podiums, paired with compatriot Jens Erik Madsen.

Madsen decided to put his career on ‘hold’ over this winter just when the pair were on the brink of being one of the very best teams.

But Hester continues to impress; strong in the chase and fast at the finish.

There’s always a strange vibe at the end of a six day, the soigneurs and mechanics want to get everything packed away for a quick getaway. 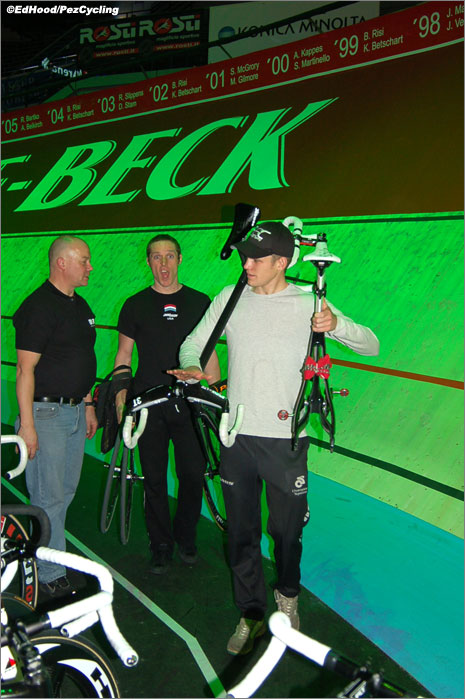 Jackie and Brad prepare for the long journey home.

The little teams just want to survive, maybe move up from the bottom of the classement.

The mid-ranked teams wonder if they’ll be able to weather the storm, stick with the big beasts when they attack and maybe catch other organisers’ eye. 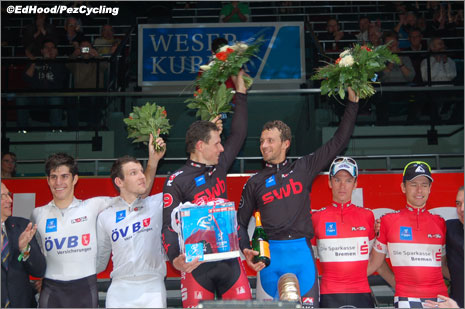 The final podium in Bremen.

At the top end of lap board the big beasts all want to win, or at very worst, make the podium.

At the end of this race most would be happy with how their race went and the crowd went home happy. 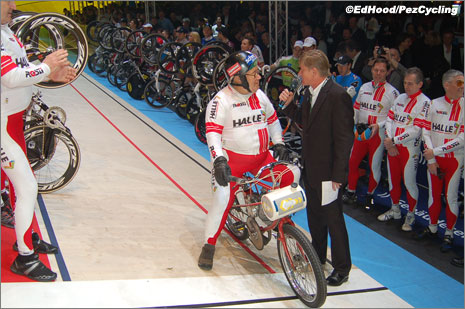 And talking of going home, we said ‘goodbye’ to Derny driver extraordinaire Joop Zijlaard – I didn’t know the man, Derny drivers don’t talk much to runners.

Maybe it’s because we don’t understand that the Derny drivers are the most important people at a six ?

Anyway, Bremen is over for another year.

Next up is Berlin – see you there ?