Despite not working as a runner for the stars at the Gent six day race, Ed Hood just couldn’t stay away from the action in Belgium this week. The six day in Gent and the WorldCup CycloCross in Koksijde were all on his radar. It’s another Belgian adventure!

The road to Koksijde at noon, and Viki Sue Robinson’s disco classic, ‘Turn the Beat Around’ is on Radio Nostalgie – but Callum can’t cope with too much volume. The coast rode is quiet and bleak on a drab Saturday November afternoon – if this was July, the day tripper multitudes would be here. 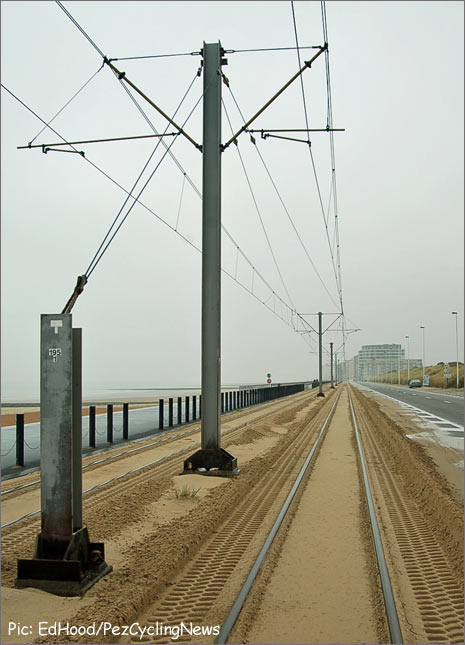 The trams run down the coast alongside the beaches which Marvin Gaye used to walk, loving the big sky, distant horizon and peace. Before his untimely death at the hands of his father, he was going to buy a house in Ostend. 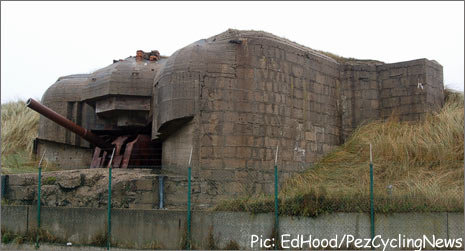 And there are reminders of other dark days all along the coast amongst the dunes are concrete bunkers, built by the Germans during World War Two to thwart an Allied invasion. But that came much further south, in Normandy. 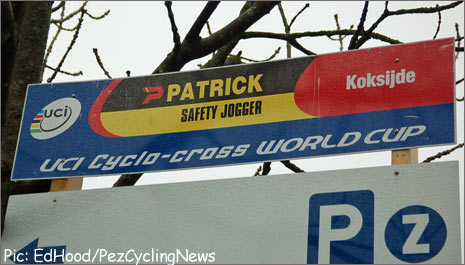 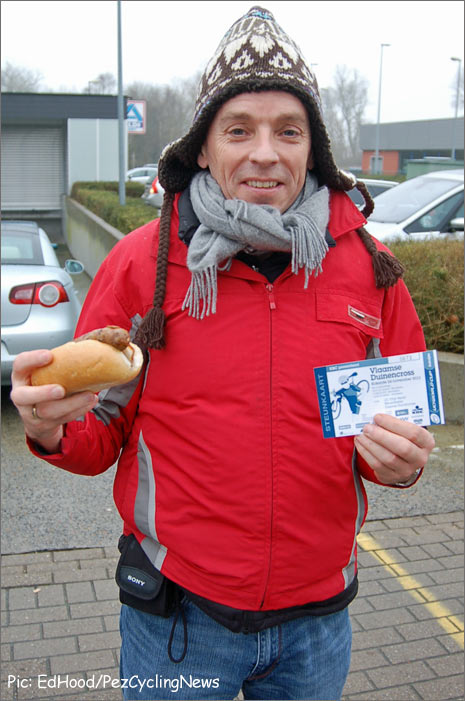 It’s 15 Euros to get in to the circuit and three Euros for a hotdog; but Callum needs one – badly. Whilst there’s a lot of sand involved, there’s mud, grass and tarmac, too. 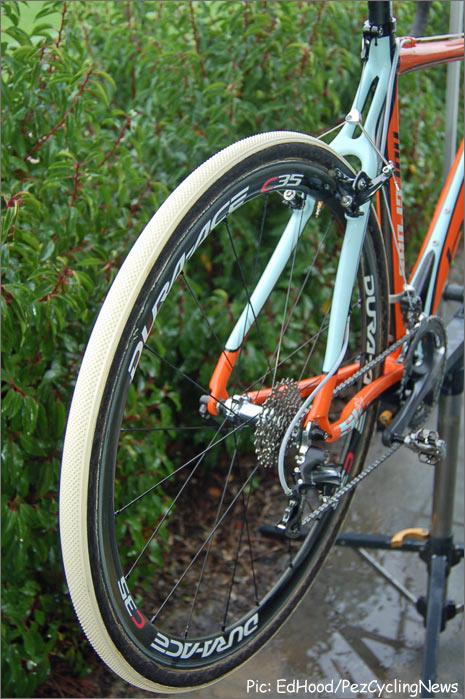 And tyres are as fat as the UCI regs will allow – you need grip in that sand. 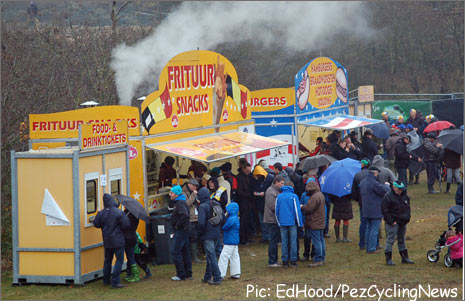 Despite the weighty four Euro price tag on the ‘frites and saus’ we succumb – and besides, it means we can shelter from the rain under the frituur canopy.

Bang on 15:00, as befits a World Cup, the flag drops and 60-odd crossers explode off the start line like scratch men in a track handicap. 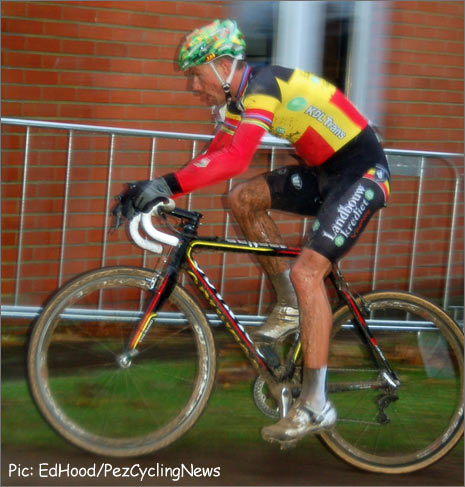 Sven Nys has been the ‘man in motion,’ this season – but after one lap he’s down in 17th place. The pace is pretty fierce with the field strung out by the end of the first lap – with Klaas Vantornout doing the damage. 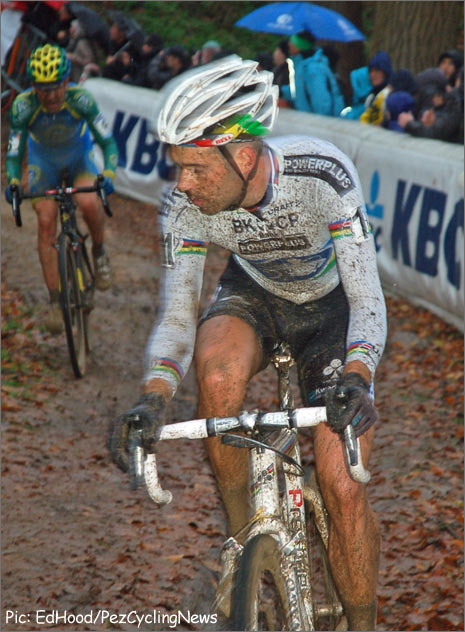 His passive face a contrast to the contorted visages of those ahead of him in the string. And then suddenly, a switch is flicked and it’s a different race with Alberts screaming through the field and taking the lead.

But Nys is watching him, hawk like, his face that of a man who has it all worked out. 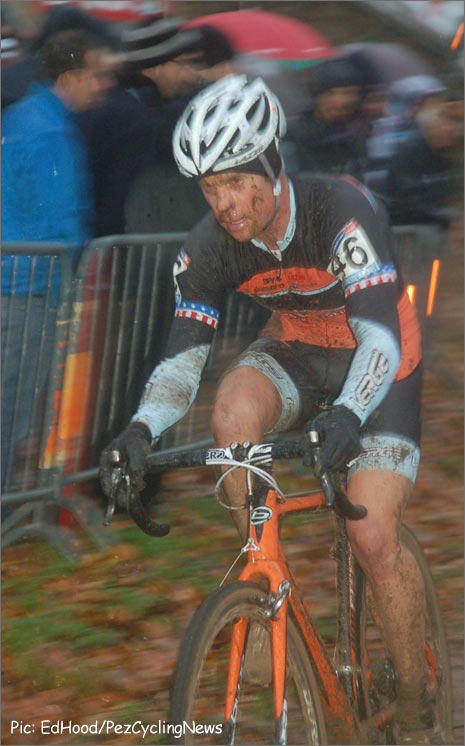 Former Worlds silver medallist, Jonathan Page isn’t having a good day – his support team would tell us later that the American crashed a couple of times perhaps as a result of making the wrong tyre choices. 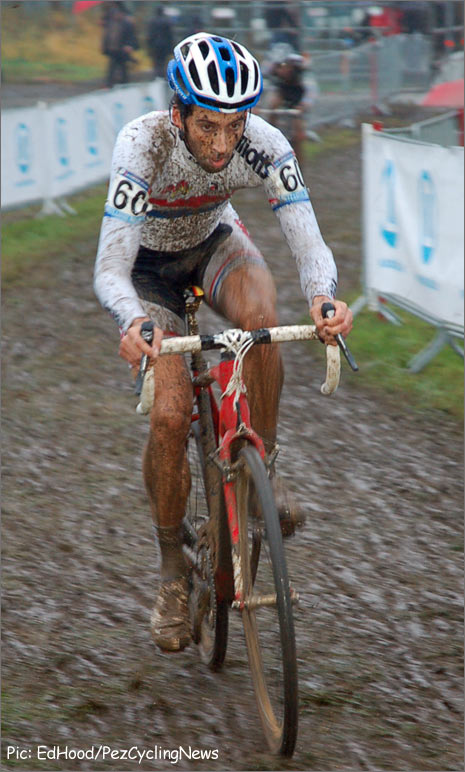 British champion Ian Field is another not enjoying his day in the sand – sliding back through the field. The weather is foul, wet, cold and taking decent pictures is difficult with lenses and view finders steaming up and the fine mist of rain wetting electronics. 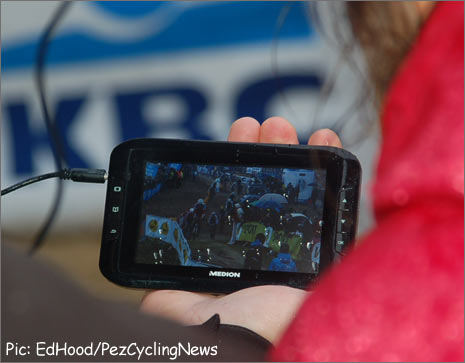 But on the subject of electronics, one fan has taken things to a new level – watching the race on a palm held TV screen when the renners aren’t churning up the sand in front of him. 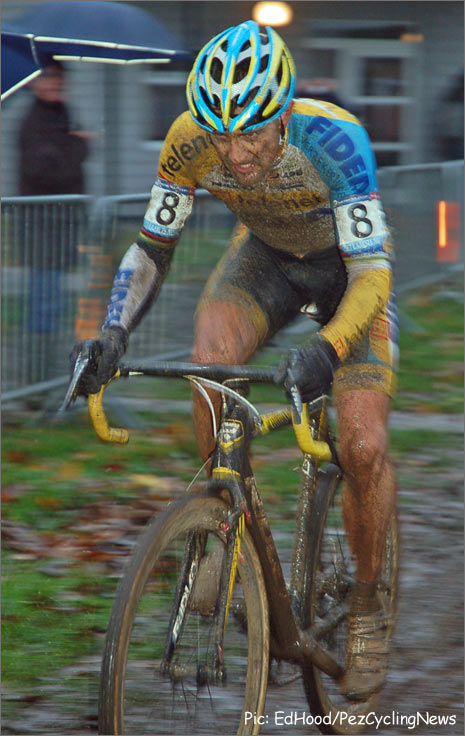 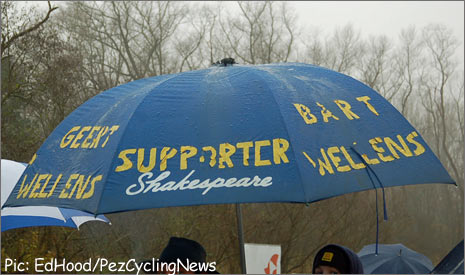 Former world champion, Bart Wellens is way off the pace; maybe the state of one of his supporters’ umbrella sums it up best – still colourful, but the letters are peeling off.

Alberts makes one mistake, he stalls on a steep but rideable dune and has to dismount. 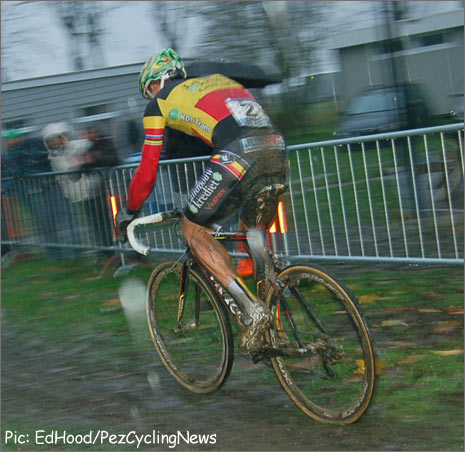 Nys pounces, he bangs down watts through the Colnago’s transmission which a team sprint lead rider would be proud of, the Dugasts bite the damp sand – and he’s gone !

The rain gets serious – so does Sven, powering through the mud. Albert knows it’s a lost cause but he also knows that Nys might just crash or puncture, so he keeps the pressure on to the end. 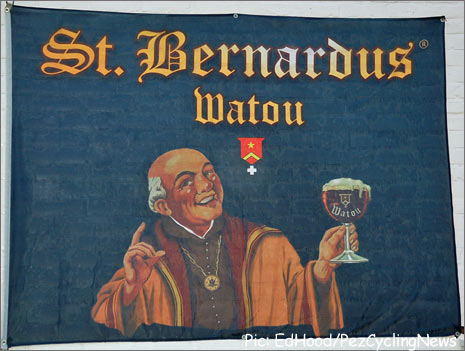 On the way back to the car the St. Bernardus monk invites us in for a beer – perhaps later, Father!

The drive back to Gent is quiet, we’re all trying to ignore our hangovers . . . 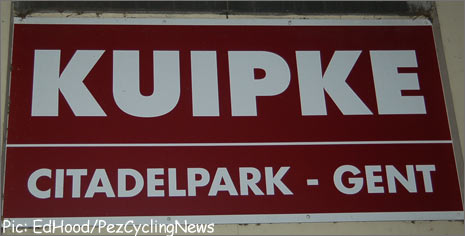 It’s after 21:00 hours; the smell of hamburgers hits us hard as we walk in the doors of the Kuipke velodrome – but when we get into the track centre it’s beer fumes that dominates. 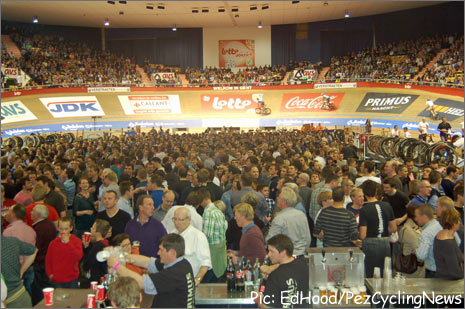 There are kegs of it everywhere, they can’t pump it fast enough and the floor is awash with the stuff. Usually sensible men, slur their speech and sway; ‘Ed, I love you !’ 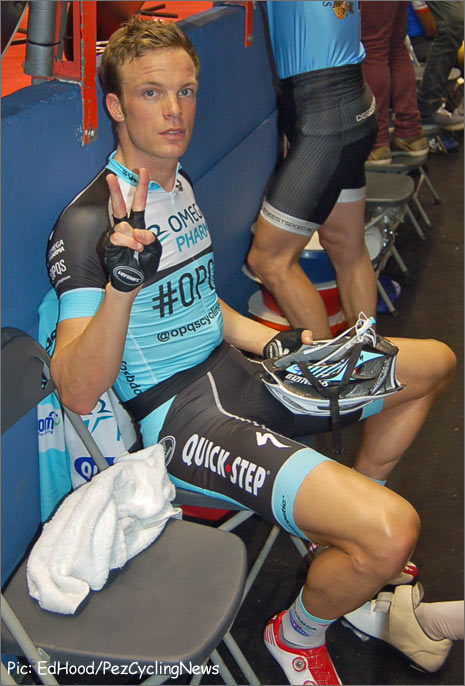 But Iljo’s senses aren’t dulled, they’re razor sharp – he gives me a hand shake and the victory sign. But maybe it won’t be that simple, Kenny De Ketele and Gils Van Hoecke are world champions and despite Iljo being partnered with rapid Aussie team pursuit and omnium specialist Glenn O’Shea, the men in the rainbow jerseys want this one.

Kenny won with Bartko, last years – second place is of no use to him. 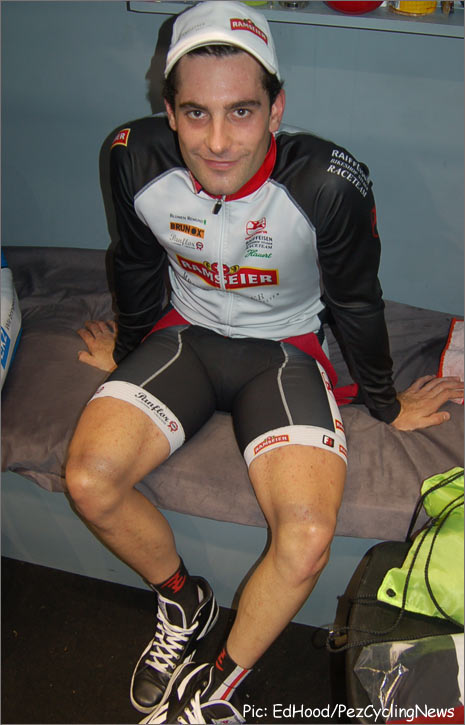 But Tristan Marguet is a happy boy – he’s taken three track records this week. South African world keirin medallist Jean Pierre Van Zyl’s 08.63 had stood for 10 years – until this week, when Tristan produced 08.57 and then 08.56.

And to make it a hat trick, Tristan and ‘Marvellous’ took the 500 metre flying start track record down to 27.03. 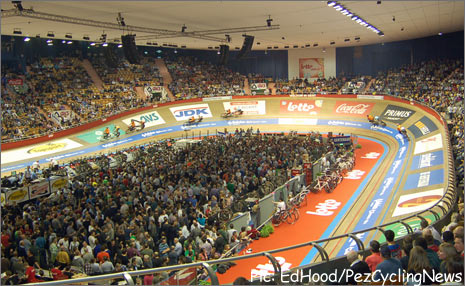 It’s after midnight when we take a seat up in the gods. 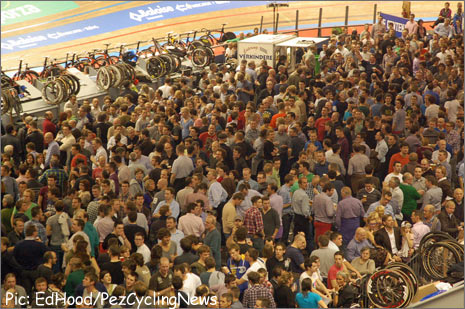 The Dernys drone, the pils pumps and the track centre is just mad. 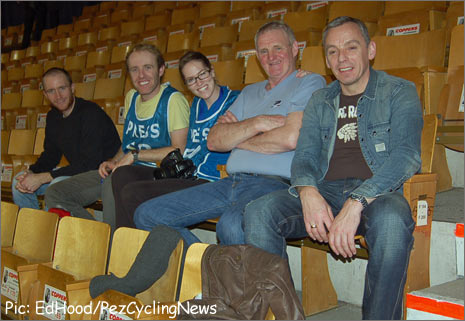 But it’s great to get time to chat to PEZ man Jered Gruber and the lovely Ashley – it’s not often they sit still long enough to take a picture of.

However, one of the locals is intent on interrupting our chat – he’s trying to work the crowd up into a ‘Mexican wave’ frenzy. 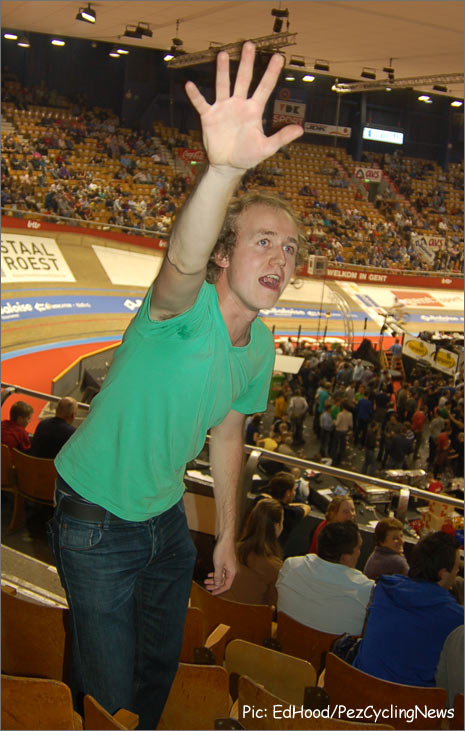 The man is persistent and eventually he has all waving, shouting and laughing – nice job, dude ! 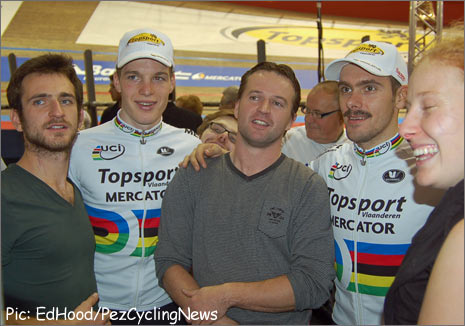 The last pistol cracks, the fans tell Kenny they love him as he tries to fight his way to the shower – but for us it’s time to head for the Adoma and bed. 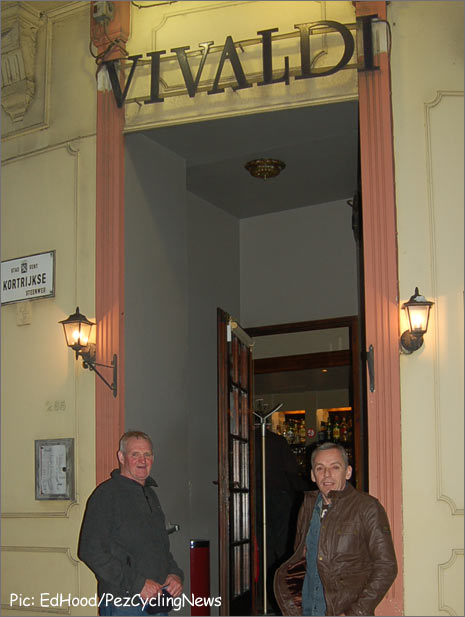 But maybe we could have just one at the Vivaldi.

COMPUTRAINER: And The WINNER Is!