Race report: You’ll have heard about the route change for the Ronde van Vlaanderen? No Muur van Geraardsbergen, no Kappelmuur, no Bosberg, replaced by three finishing loops including three tortuous ascents of the Oude Kwaremont and the Paterberg. One loop would be enough! So who survived this newly-conceived nightmare?

Sure enough, it’s still beautiful Brugge for the start in chill, sunlit conditions, but the riders are heading for Oudenaarde this year, not Meerbeke. All the big Classics names are here except last year’s injured winner Nick Nuyens but most people reckon it’s just a simple case of Boonen vs Cancellara vs BMC’s multi-headed hydra.

Inside the first 20 kilometers a group of fifteen is away with – intriguingly – Tyler Farrar of Garmin-Barracuda who could feature here and in Paris-Roubaix. It’s a flat opening half of the race before the climbs come thick and agonisingly quick: Nokereberg, Taaienberg, Eikenberg, Molenberg, Rekelberg, Berendries, Valkenberg. 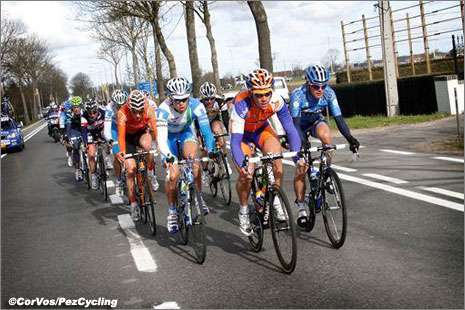 Mechanicals, punctures and a few not-too-serious tumbles as the field trundles over the Eikenberg and the Molemberg. Over halfway home, onto the Rekelberg and two-time champ Devolder already looks cooked.

90kms to go and former (?) sprinter Daniele Bennati has a dig for RadioShack-Nissan with BMC’s Thor Hushovd for company. They go nowhere.

Now the Oude Kwaremont for the first time today and the peloton is closing in, just under two minutes back. All the top guys – Boonen, Cancellara, Gilbert, Breschel – in touch.

DISASTER! Cancellara crashes hard with 60kms to go and stays down. His team waits, but Spartacus has lost today’s battle. Race over for him and RadioShack-Nissan have a major, mid-race tactical rejig to sort out.

Basayev (Astana) tries to light it up on the Kruisberg, and a formerly lacklustre Gilbert jumps with him.

41kms to go and Langeveld jumps off the road for a short-cut and suffers a catastrophic spectator/rider/pavement interface. That’s last year’s Het Niuewsblad winner and Cancellara now OUT! A handful of seconds now as Francaise des Jeux lead things into the Oude Kwaremont again with David Boucher dangling just out front.

Boucher blows a kiss to the camera as the peloton comes by. Garmin-Barracuda’s Sep Vanmarcke plows the furrow up front, with Ballan and Boonen cruising in his wake. Only thing is … not much evidence of any OmegaPharma-QuickStep team-mates for Boonen other than Sylvain Chavanel. 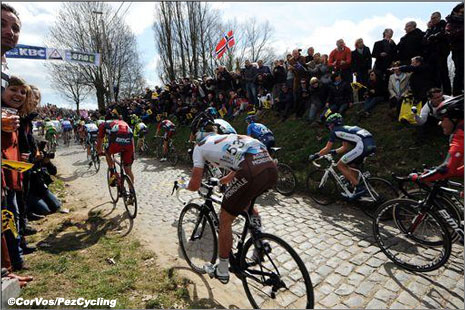 Cobbles were the order of the day.

Sagan comes through for Liquigas as this beast of a climb causes major damage … gaps being opened up everywhere. Suddenly there’s a significant advantage for a front group of about 25.

Luca Paolini (Katusha) rips it up. 36 kms to race and Flecha (Team Sky) gets up to him. Vincent Jerome makes it a trio for Europcar and they’re not mucking about.

As soon as the chase group hits the cobbles of the short-sharp-shock of the Paterberg … riders hit the cobbles, overshoot into the barriers. Mayhem! terpstra wobbles into Van Summeren who goes down, and dominoes Degenkolb onto the road and a Verandas-Willems rider into the ditch.

Paolini is looking strong, and ten go over the top more or less together although Boasson-Hagen is gapped.

32 clicks from home and Chavanel gets out of the saddle to test the group’s strength.

Second group on the road is being towed by Vacansoleil’s Gustav Larsson for his capo Bjorn Leukemans; Roulston is there too as his RadioShack-Nissan squad has been decapitated following Cancellara’s chute. It’s thirty seconds between the lead and the second group with Boasson Hagen and Gatto somewhere in the middle.

27 kilometres left and Vincent Jerome goes. OmegaPharma-QuickStep need to push Niki Terpstra to the fore as they have three in the front group and no-one else will help them.

In group two, Eisel has his race face on as he drags the race together – Stannard and Knees there with him for Team Sky and they’re less than thirty seconds back.

At the kop van de wedstrijd Niki Terpstra has now joined Vincent Jerome. Is the E3 Prijs winner harbouring mutinous thoughts or will he be faithful to Boonen?

20kms left and the field lines out ahead of the last struggle up the Oude Kwaremont. Burghardt is up to the two leaders now. Farnese-Vini’s Belgian hardman Kevin Hulsmans is towing the field for his boss Pozzato. 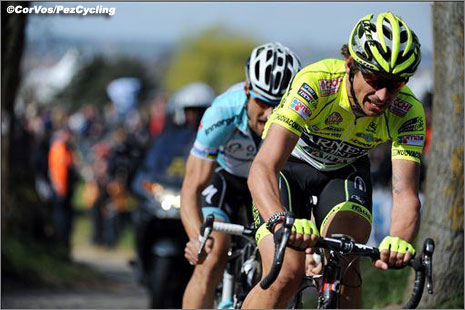 Pozzato moves across the gap to Ballan with Boonen on his wheel – the decisive moment.

There looks like a definitive selection now. Ballan is gliding clear, and now Pozzato jumps after him. Boonen limpets onto Pippo!

Paolini is absolutely screaming along behind as the Paterberg looms … sharp right-hander for Ballan/Boonen/Pozzato and Paolini just behind. But the chase is there, too! Looks like no more than ten seconds!

Boonen’s shoulders start to roll as Pozzato finally cuts loose! Sagan is chasing and the Paterberg has caused major fissures in the lead group. 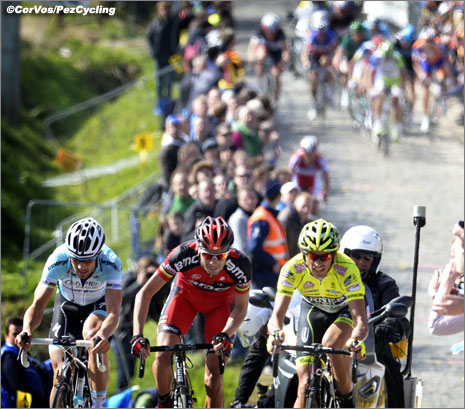 Pozzato gave it major gas on the Paterberg, but it wasn’t enough to get rid of Ballan and, more importantly, Tom Boonen.

13kms left and it’s now twenty seconds advantage for Boonen/Ballan/Pozzato as they dodge a badly-parked red van on the road. Waaaaaay, waaaaay behind, Philippe Gilbert is right at the back of a chase group at the bottom of the Paterberg so there will be no Belgian champion’s jersey on the podium today.

30 seconds now and the front trio look like they’ll fight this out between themselves. The chase includes Voeckler, Flecha, Paolini, Breschel, Roulston but also Van Avermaet and Chavanel who have mates up front.

8 clicks from the line: Pozzato flicks his elbow, Boonen comes through, 2007 winner Ballan sits calculating … “When do I attack?”. The two Italians have a discussion as Boonen leads. The gap is now so big that spectators can amble across the road between groups passing.

5 kilometers now and it’s over for the chase – the gap’s just on a minute now. 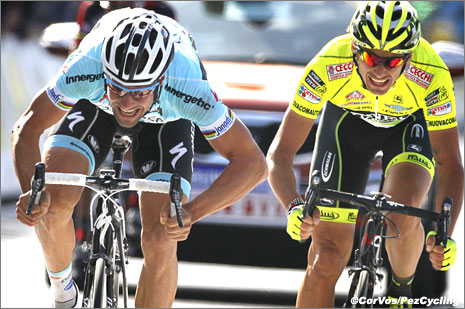 Red kite Ballan tries again but it looks a bit half-hearted and it’s slowed right down now: this is it, sprint for the line! Ballan leads it out. Boonen goes to the left, Pozzato claws closer, closer aaaand … Boonen gets it by half a wheel!

The chase catches Paolini on the line, brave effort from the veteran Italian.

The Flemish fans are going mental: at the finish it’s an outpouring of joy, there’s a major bounce on the Paterberg, local TV picks up a little boy on his knees in a cornfield, thanking the Lord! 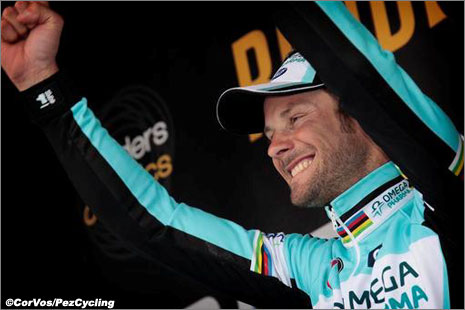 Fabian Cancellara: A Slave To His Own Success?