Race report: It’s always special to see the world champion line up in a pristine rainbow jersey for the Race of the Falling Leaves. OK, we’ve had a wee name change, and the calendar has been tweaked, but still … Gilbert is looking happy in his new outfit. Contador is here, a clutch of Colombian talents, Nibali and Basso, Joaquim Rodriguez, too. Game on!

It’s not the nicest morning for a bike ride, as the gruppo wheels sedately out of Bergamo. It’s grey, cold and wet. There’s only one tasty little climb on the menu, the Colle dei Pasta when the riders will still be trying to warm up. 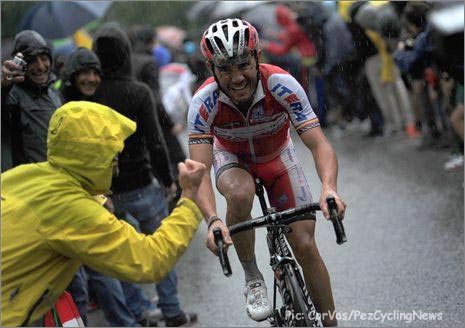 Joaquim Rodriguez wrapped a stellar season with a solo win that was nothing but class.

After that it’s pretty steady progress towards San Gottardo and the start of the Valico di Valcava, which twists and corkscrews upwards like a proper Alpine climb. It’s six excruciating miles of late-season pain with an average slope of 8%

It’s absolutely tipping it down on the Valico di Valcava which is the roof of this year’s event. We’re through 91kms and we’re at 1336 meters above the old saltwater.

Plunge down through Roncola, San Asosimo and on towards the four-kilometer Colle Brianza which comes and goes under the wheels, but things are about to take a very nasty turn.

Through Canzo in anticipation of the ferocious detour onto the Muro di Sormano, a semi-mythical climb chucked out of the Lombardia route back in the early ’60s as being too hard going up and too dangerous flying back down the other side. And that was in the day’s when men were men. 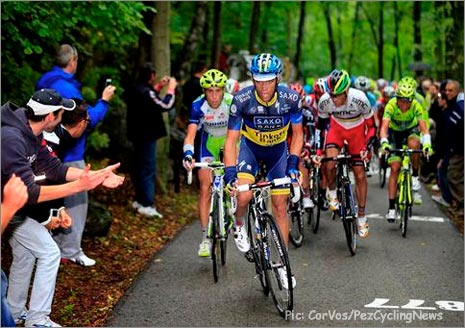 Contador takes his rightful place at the head of affairs on the steep slopes of the Sormano.

The front group are climbing, and going through a tricky divorce. Cristiano Salerno (Liquigas) is the bad guy who first decides someone’s got to be left behind and while Bardet, Morabito and Alberto Losada don’t want the relationship to end, the rest are helpless.

The headlights of the following cars incongruously making the sleek, wet road shimmer. BMC are on the front of the field, Ryder Hesjedal is tracking Contador in the wheels.

The road tilts briefly down, and the front foursome skitter over a very narrow bridge.

Romain Bardet argues with his gears, but he has stretched and broken Morabito and Salerno. The moto lights blare through the damp air like angry ghosts. 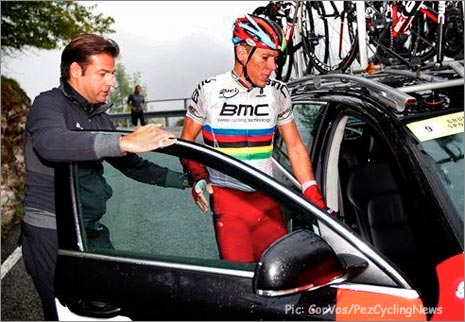 Phillipe Gilbert’s day came to an end after a crash on the Sormano descent.

It’s a fiendish descent down through Nesso and Bellagio, and Gilbert overcooks – he’s down on a corner and the world champ is out of the race. Contador and Nibali are at the head of the chase, they slow things down when they hear what’s happened. A race motorbike comes down, other riders, too. La Gazzetta dello Sport will have a field day with this tomorrow.

Onto the holiest of the holy, the Ghisallo. Bardet has a minute over the chase as the horizon starts to tilt the wrong way. The first part of the climb is twisty and ten-percent tough, then it eases … a little. Onwards, tipping a hat to the town of Guello and up the last ramp past the famous chapel.

Katusha slam their collective foot to the metal and Bardet is suddenly swept up with 50kms left. All the names – minus Gilbert – are there. Kevin De Weert (OPQS) attacks and quickly rips out a minute.

It’s another fast drop off the Ghisallo, and then about ten flat miles before the Villa Vergano which made an appearance last year. De Weert is blasting along, and the roads are looking a bit drier here.

32kms to go … CRASH! Tiralongo (Astana) and Laurens Ten Dam (Rabobank) are flat on their faces on a sweeping left-hander. So is Nibali! The ace descender goes down almost exactly to the decimal degree location where he fell in 2010’s Lombardia.

30.5 kms left: now De Weert is on the tarmac, just sliding out in a low-speed, hard impact thump. The field is on him in seconds. Now Basso is leading the descent. Yep, Ivan Basso whose descending skills were once mocked as glacial by Simoni and Ricco.

28.5kms left and Movistar’s Rui Da Costa is away, but he doesn’t look totally committed to this. Just behind, Nibali is in the front group again, scowling and discussing the odds with Ivan Basso.

The race skirts the lakes, a dark stony grey and not a place for a swim right now. About thirty guys, including four Euskaltels and three Lampres, together chasing down Costa.

Seventeen kilometers to go and Lars-Petter Nordhaug calmly eases a Lampre rider aside and dramatically lifts the pace, lining out the bunch. Costa has 27 seconds.

It’s about 8% for the bulk of the Villa Vergano and then it pitches up to over 15% for the last kilometer. Marcato (Vacansoleil) jumps, and he’s joined by Kolobnev (Katusha) and Euskaltel’s Gorka Verdugo.

It’s murky and grey and the television pictures are sparse. We hear Joaquim Rodriguez is alone at the top of the last climb, and he’s alone on the descent.

Off the top, eight clicks of a drop and Henao, Uran (both Sky), Contador, Movistar’s Quintana and BMC’s Santambrogio chase Rodriguez. It’s now lashing down again, the rain bouncing off the tarmac.

Rodriguez is belting along, now gloves on, grimace on his face. He tries to pass his clear glasses to the TV moto but ends up just chucking them to the side of the road.

Kessiakoff (Astana), Ten Dam (Rabobank) and Nibali (Liquigas) are in the chase group and it’s a last flat three kilometers drag race to the line.

Counter-attack with 1.4 kilometers to go but Purito is still away, half-hidden in the gloom.

Under the red kite, Rodriguez is still flying, spray whipping off his wheels. Round the last left-hander like a toddler taking his firsts steps and a soaked and thrilled Joaquim Rodriguez is the first Spaniard to win Lombardia. 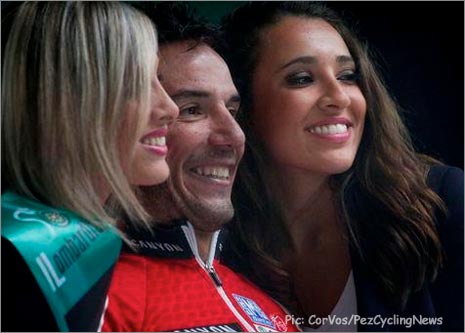 He hurls his bidon high into the air as he freewheels home. He’s backlit by the race motos – like a rock star at a stadium gig. He’s also on top of the UCI’s World Tour ranking, which I’m sure he’s delighted about.

Samuel Sanchez wins the dash for second and Uran was third.

A wet and wild season wind-up race, and congrats to Purito.

Pez’s own Ale Federico is at roadside. Stay tuned for his words of wisdom!