Longtime suffering cycling fans in Scotland had their dreams fulfilled recently with the opening of the new International velodrome in Glasgow. With a recent round of the Track World Cup held on the new boards, PEZ fan and proud Scot, Mark McGhee was one of the first in line to buy tickets. Here’s Mark’s story from that first historic International meet.

This was a day that many thought would never come, at least in their lifetime; the first international World Cup track meet at the new indoor velodrome in Glasgow. Scotland, arguably the birthplace of the modern bicycle, has waited an age for this facility and at last it’s been realised in preparation for the 2014 Commonwealth Games. The last time the Games came to this corner of the world Edinburgh gained an outdoor track and an international-sized swimming pool. Both are now looking very long in the teeth but it’s hoped that Meadowbank track will be able to continue because as Chris Hoy’s father David says “without Meadowbank it’s doubtful that Chris would have become the rider he is.” 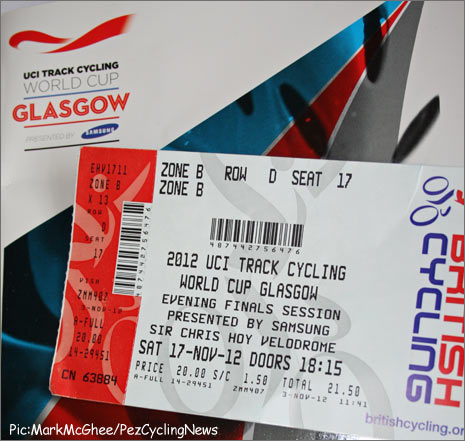 The new velodrome is spectacular and forms part of the bigger Emirates and Commonwealth Arena boasting a new indoor running track and sports hall. It’s a full-sized 250 metre track designed and constructed by renowned designer Ralph Schuermann and has capacity for some 2000 spectators with another 2000 temporary seats for major events. As spectacular as the whole building is, all eyes were on the velodrome for the Track World Cup. There were teams from 47 different countries and they included Germany, Italy, France, Spain, Hong Kong, Australia, USA and the UK. So keen were countries to compete there were even teams there from Wales, Surinam, China and the kingdom of Navarra. 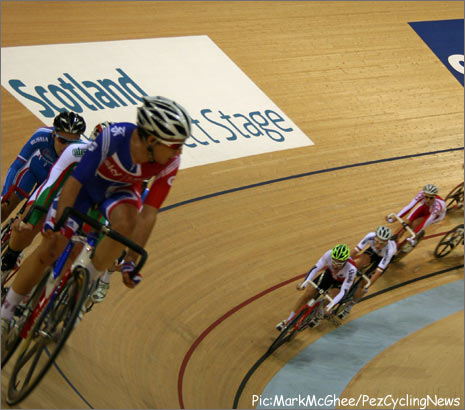 The racing was fast and furious as expected but what surprised some, and delighted others, was the overwhelmingly warm and passionate welcome given to all the competitors from the crowd. Every rider, successful or not, was cheered and the spectators stood for every national anthem. The cognoscenti, and the frankly curious, were there and catered for by the event. Superstars walked among the crowd and there was much shaking of hands but people were polite and respectful. You could have a chat with Brian Smith or Alan Hewitt, Chris Newton or Shane Sutton. 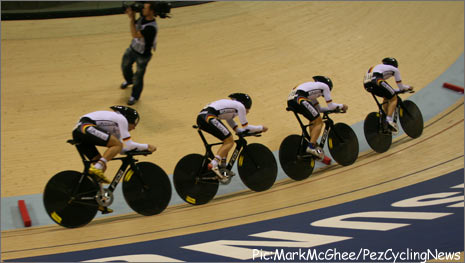 The atmosphere on the Friday night especially seemed to flow of its own accord even though Saturday night was the hot ticket. Watching the sprint teams was exhilarating and a perfect introduction for track novices. On Saturday, with the stakes ramped a bit higher, tensions may have crept in and there were several spectacular crashes with Jason Kenny coming down heavily in the men’s Keirin. Clever lad though got up and crossed the line in order to gain points. 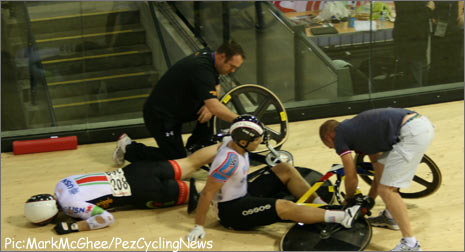 One or two riders got a bit too up close and personal with the new boards.

The star of the event though, and fast becoming the darling of British track cycling, was Laura Trott who triumphed in the woman’s Omnium winning the Elimination and the 3km Individual Pursuit along the way. This was the rider the spectators had come to see and she didn’t disappoint.

It wasn’t a completely faultless event though in that the huge car parks had been completely given over to teams, media and VIP’s and spectators were forced to park over at Celtic Park on waste-ground or catch the handy free bus from the city centre. More attention could also have been given to the fact that some very famous names were present in the centre of the track and I’m sure that most of the spectators were unaware that Tour de France winner Stephen Roche was there along with David Millar, Ron Keeble and Sean Kelly. 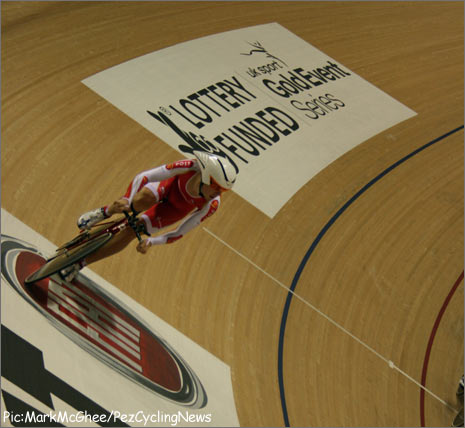 Overall, it wasn’t just the success of the event that impressed everyone but rather the emergence of a rare and singular passion amongst the crowd for track cycling. The waiting list for track accreditation is growing ever longer and riders are travelling from all over Scotland, the north of England and Ireland. As Martyn Irvine of Ireland said, “this is now pretty much my home track.” Martyn set a personal best time of 4:22.745 in the final but lost out to Denmark’s Lasse Norman Hansen (4:20.875).

Expect this track to provide records in the run-up to the Games and an upsurge in cycling in Scotland.