Race report: Now, I wouldn’t want to be the post-race interviewer who asks Cavendish if his next target is losing two or three pounds! Cav and his Sky team-mates were right in the mix as Kuurne-Brussel-Kuurne came down to the line. Did Cav smile at that question because he won, or did he react differently because things didn’t go to plan? Read on …

Yep, Cav has a big, big smile on his face today after what looked like an absolute masterclass from Team Sky’s cobbled Classics veterans – Eisel, Hunt and Stannard were among those who controlled practically the entire race. 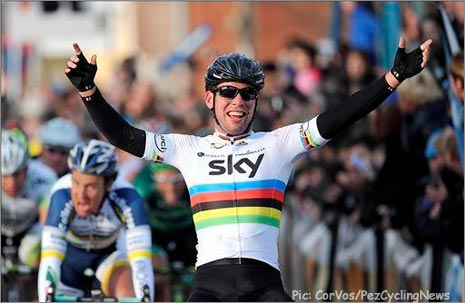 Cav showed some serious intent for what lays ahead this season.

It’s not quite the sunshine central that greeted yesterday’s Omloop Het Nieuwsblad – it’s more a day for layering and accessorizing, with matching hats, gloves, gilets and knee warmers. There are only eight climbs on today’s 198-kilometer route but they include the Oude Kwaremont, the Kruisberg and the Nokereberg. Not as tough as yesterday’s Omloop, but no easy Sunday afternoon noodle either.

Mark Cavendish is starting Kuurne-Brussel-Kuurne for the first time, and looks a bit glum on this gloomy Sunday morning, even if he will have the backing of Flecha, Barry, Hayman and co.

Matti Breschel looks chiselled as he prepares to go to battle for Cav’s erstwhile pilot-fish Mark Renshaw in Rabobank’s colors. Boonen is back in the fray for OmegaPharma-QuickStep after yesterday’s miscalculated sprint, and BMC will expect to figure even if Hushovd and Gilbert are sitting this one out.

The opening fifty kilometres or so are as fractious as a Saturday night at closing time: lots of aggression, plenty posturing, but nothing really making a big impact. Finally, though, someone lands a proper haymaker and the fight is on.

It’s Julien Fouchard of Cofidis and Landbouwkrediet’s Koen Barbe and Gilles Devillers; Preben Van Hecke of Wallonie Bruxelles; the remarkable Nico Eeckhout of An Post-Sean Kelly; NetApp’s Jerome Baugnies; and BMC have Greg Van Avermaet up the road. Interesting. The gap loops out to over five minutes.

Sky, Rabobank and FDJ do some work and the gap starts to shred. Just over two-and-a-half minutes with 80kms to ride. As if by magic, the Rabobank pressure works and there’s a mysterious gap in the bunch.

There’s Boonen, Farrar, Flecha, Ballan – but Greipel has lost out so Lotto are having to chase … frantically. Cavendish is in this group and is getting a free ride. Griepel attacks! there’s an immediate reaction and the gap to Boonen’s group comes down.

It’s all coming together with about an hour to race. The original breakaway is toasted, but … that’s Eekhout again! In the lead now with Wouter Mol of Vacansoleil. Then Sylvain Chavanel (OPQS) gets across, Jan Ghyselinck (Cofidis), Jimmy Engoulvent (Saur-Sojasun) and Aleksandr Kuchynski (Katusha), too. Six out front.

Team Sky look to be keeping the peloton in check – chasing but not flat-out. The gap starts to tickle a minute, but still no need to panic.

28kms to go and there’s a sharp right-hander in the centre of Kortrijk which a group of riders cut as the road narrows. The inevitable happens and a coming together plonks a half-dozen on their asses – Flecha (Team Sky) is rejoining proceedings after dropping back and arrows neatly through the gap and away.

24kms to go now and Team Sky are battering away at the front of the peloton. They haul it together with every pedal turn and the seconds are ground off the escape’s advantage. 52 seconds now.

21kms left to ride, and Kuchynski is looking unseasonably shiny in his glowing white kit, the Belorussian champion’s outfit. A Classics rider shouldn’t look so tidy, surely? Where’s the rain? The mud?

On the head of the peloton, Eisel’s lantern jaw is set firm as he tows the race along. It’s thirty-two seconds to make up with 18 kilometers left.

One 16-kilometer finishing loop to go now and the peloton has the break in their sights. The bell clangs to mark the last lap, and the bunch is only … 27 seconds back.

13kms to race and there are no problems on that nasty right-hander in Kortrijk; they’ve all learnt their lesson! The break is also learning that their chances are doomed – only 13 seconds of a lead now.

Team Sky are mashing it. A long line of black jerseys, with a gleaming white one circled by rainbow bands tucked at the end … Cavendish getting an armchair ride to the finish.

They’ve lined it out so much that the field covers the length of an entire street block.

Nine kilometres to go and Engoulvent decides it’s time to light it up. He’s off, but his break-mates are on him. Engoulvent’s got form, he’s a good prologue rider, but he’s surely too hammered to make a nine-kilometer solo TT effort work now?

Seven clicks from home … Eeckhout goes! Huge attack and Engoulvent goes with him. The peloton chows down on the other escapees. It’s Rambo and Jimmy versus the field! 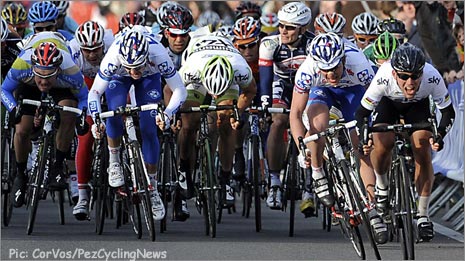 Five kilometres left now. Sky and Rabobank to the fore as Eeckhout desperately tows Engoulvent. Jimmy Casper punctures out of the field – crappy timing for a sprinter! Bad luck.

Field together now. Sky have three riders in front of Cav. They also have defending champion CJ Sutton intriguingly poised on Cav’s wheel.

Four thousand metres remain. Sky need to be careful they don’t get swamped! There is a Katusha lead-out train parallel to them. The speed drops and the field spreads out across the road at precisely the wrong moment. You needed to go left at the roundabout and a host of riders … don’t. They take the long, wrong way around and are out of the running.

Two kilometres! Sky have the left side of the road locked down, Cavendish protected. Farrar is in contention, just behind. Greipel is there, too!

Laatste kilometre!: Sky tow it through the red kite and into the finishing straight. Cav waits … waits … waits … and shoots off Sutton’s wheel to storm through for the win!

Hutarovich does a storming job for second, and Kenny Van Hummel scores for third.

Another pretty good Belgian weekend for Team Sky, who’ve scored at least one win in each of their three visits to the Omloop Het Niuewsblad/KBK double-header. Cav wheels to the podium but has time for a big hug with Eisel, Dowsett and Hunt, before collecting that nice stuffed toy donkey trophy which will be a nice present when his daughter is born soon. 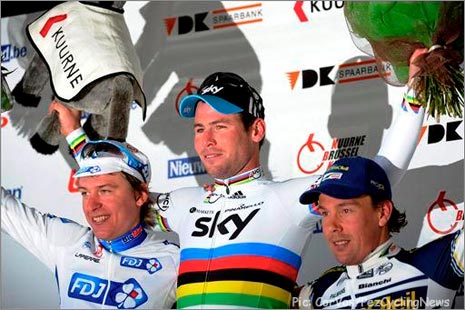 A trademark Cav soundbite in his interview with Sporza? When praising his team, he came out with this classic: “It could have been easy for the guys to come here and say: ‘F*ck off! We’re not riding.’” Congrats to Cav, Huta’ and Van Hummel.

Keep it Pez for your Classics fix!