From afar, the Tour of Qatar looks like a curious early season sideshow ball-buster staged in some far off desert – a windy one at that. Over the last week, PEZ has gotten the unique opportunity to peer inside the race courtesy RTS Racing’s Lee Rodgers. Let’s go back for one more look at Qatar.

‘You left him in the desert?’

Yes. Our mechanic had an argument with our manager during the race that culminated in the mechanic hitch-hiking back to the hotel. I can’t help but think that that is just awesome!

Kept me laughing all night. 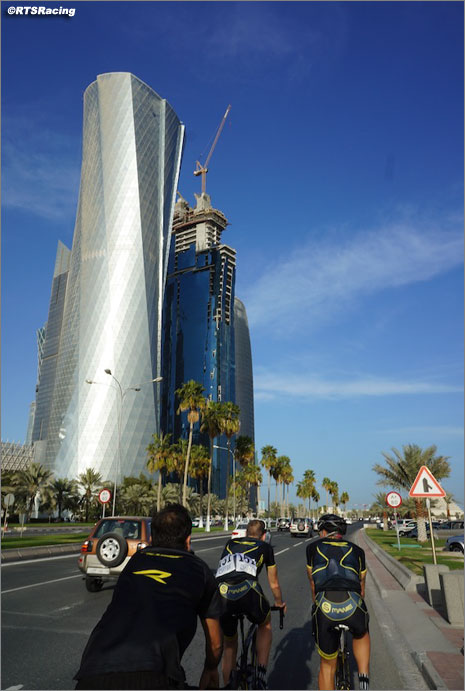 The skyscrapers of Doha.

So the Tour of Qatar 2012 is over and done with, along with my central nervous system, and I didn’t even get an ‘I survived the Tour of Qatar’ t-shirt, which is downright shameful. I did get some wicked tan lines, power readings that scare me still, saddle sores that could one day spawn new life forms if they ever saw the light of day, and a respect for this sport that I thought I understood but turns out I was just messing around with.

A lifetime’s education in a week. A learning curve so wicked it almost pulled my eyeballs from their sockets, G-force off the scale. A spanking and a deliverance. So intense, so beautiful, so – everything. 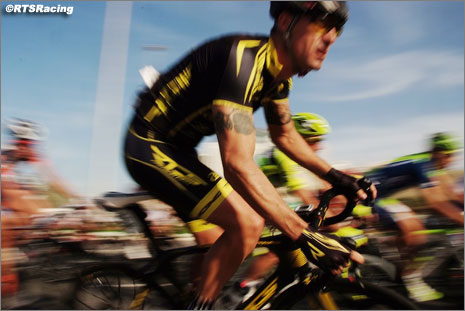 (Ah this is a little disjointed so far, much like myself, let me get back to a chronology of sorts and see if we can make some sense here.)

So Day 5, 160km that on paper looked like it was going to be really hard with several turns that, if windy, would shatter the peloton and result in small groveling hordes all over the road. Yet the winds, mercifully, never came. The only tough section was the first corner when the Omega Pharma boys decided to show how big and Belgian they are by cranking it up to over 65km/hr on the exit, leaving me and several others (such as Dekker and Gilbert) sucking air in the gutter. 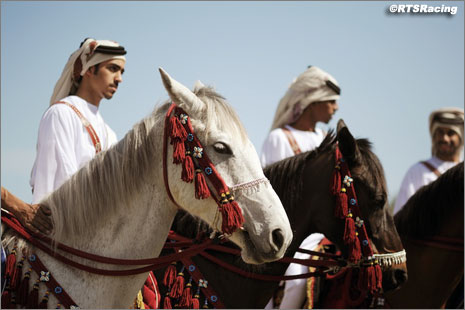 It wouldn’t be Qatar without the requisite horse shots – and that’s not meant in a negative way at all.

We got back on, but it was touch and go. Philippe Gilbert is a pretty funny guy, riding up behind people and giving them little pokes or mimicking the horn of the motos in their ear, scaring the bejeezus out of folk. At the end of one stage when the sprinters were messing about at the front he started yelling ‘The waiting game! The waiting game!’ in a doofusy voice, which was quite amusing. He also likes to try to hit lampposts and road signs with his empty water bottles, turning around to say ‘Did you see that?! Guys did you see that?’ when he actually hits one! 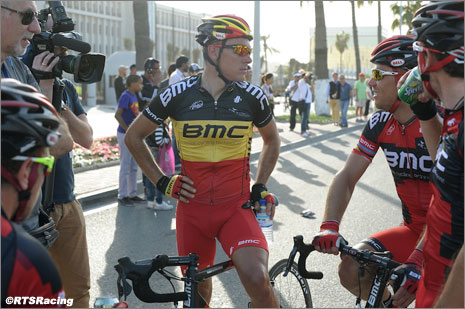 I rode alongside him quite often at the back. At one point he came over and asked ‘Are you the journalist?’ I said yeah. He asked ‘Why are you always at the back?’

‘Yeah, it’s safer here, these guys are crazy!’ he said. 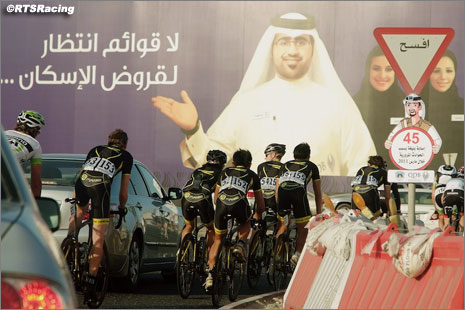 We then trundled along this lonely desert road at 60km/hr with a tailwind for some 60km, all packed in, chatting and watching the desert do its deserty thing. It just kind of sits there, all beige. The noise from freewheels filled the air along with the swoosh of deep carbon rims, the chatter of Dutch, Italian, English and French, the glimmer from spokes hitting sunlight, the colors of the jerseys and helmets dancing all around. Locked into this dynamic, organic bio-bubble with what must be just about the fittest collection of men on the planet, I’m incorporated within the ebb and flow of the bunch, the onion that peels and reforms as riders head up and down…

After a while the freewheels become rhythmic, the chatter turns to song, the whole thing hums and you hear music. The music of movement, of force, of restrained power, idling for a moment before it strives again for that crescendo that leaves you breathless. 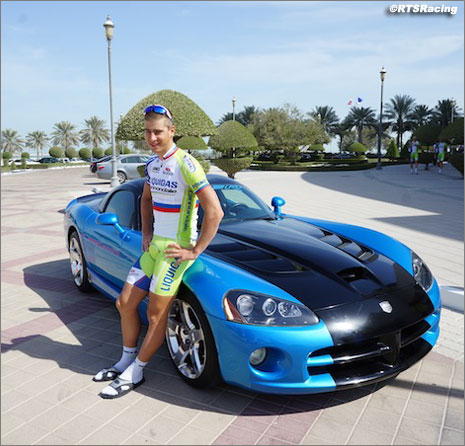 If it was a language it’d have to be called Bikelish, unfathomable to all but a select few.
Anyway, back to the action. Missed a wheel at the end and got another whupping into the wind over the last 10 km…

One day left, Day 6. Speed from the off was incomprehensible, 60, 65, 70, 73km/hr along the coast before heading into Doha for the final 9 laps of the 6km circuit. I had to chase back on with Sohrabi (Lotto-Belisol) and an Omega guy at one point, thank Eddy we had the cars to follow or we’d have been toast.

Some teammates got dropped earlier and despite hitting 70km/hr behind the team car they couldn’t rejoin. It was a pitiless surge, a show of force by Garmin and Team Sky. Somehow though 5 riders went clear before the circuit began – which was a blessing, as it meant the sprinters’ teams could leave them dangling out front til the end. Still though, each u-turn was involved a desperate sprint to get back on, culminating in the use of the 53-11 just to stay in touch with the guy in front. 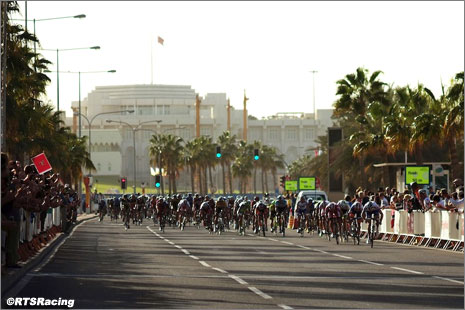 The wild and crazy final sprint in Doha.

At last the bell rang and what a sweet, sweet sound that was. I almost crashed just before Cavendish did as we exited the last roundabout when a Rabobank dude switched sides, foot came out and wheels locked but I rejoined, sprinting full gas to get back on. Then saw Cav go down, lying prone and screaming, Thor shaking his head as he went by, FDJ-BigMat guys punching the air and a million other things from the woman in the pink blouse leaning in to take a photo to the kid whose ice-cream dropped from its cone, standing 5 meters before the finish. Adrenalin will do that to you, everything goes slow-motion and you see The World.

So I finished. I survived. My Taiwanese teammates didn’t and I feel desperately sorry for them, they came so close and rode so well, real balls-out Rocky stuff. They will survive Oman though, I believe in them. 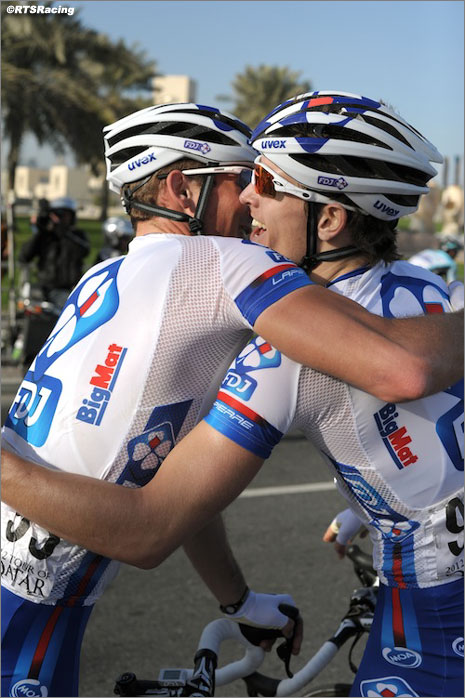 20-year-old Arnaud Demare of FdJ and a teammate celebrate his first victory.

On the way into the hotel, following a long line of riders still in gear and shades, I heard a tourist turn to his wife and say ‘Wow, they all look like RoboCop!’

Hell yeah! (Though by that point the exhaustion had hit me and I felt more like RoboFlop).
Then I saw some very attractive female tennis stars with their male coaches at reception, checking in for the Qatar tennis tournament.

***
Thanks for reading folks, been a pleasure to tell the tale of my first Tour of Qatar.