The desert. Strangely beautiful yet incessantly brutal. Not so much endless dunes of golden sand, at least not so far here around Doha – more a pancake flat, beige-colored dry mud littered with rocks the size of a fist. It looks hard. It is hard. The sun looms large, the sky dwarfs the meagre human soul, and the wind whoops ass.

Perfect place, then, for a bike race.

Stage 1 of the 2012 Tour of Qatar was preceded by our manager telling us all about the entire Iranian TPT team (super strong, at least on the Asia Tour) getting dropped last year on every stage within 3 kilometers. How those tough, meaty, merciless dudes all vowed never to return. One teammate sat at the breakfast table in the dining hall, as we sat surrounded by Phinney, Boonen, Gilbert, Hushovd, McEwen, Cancellara, Cavendish and on and on, shaking his head. 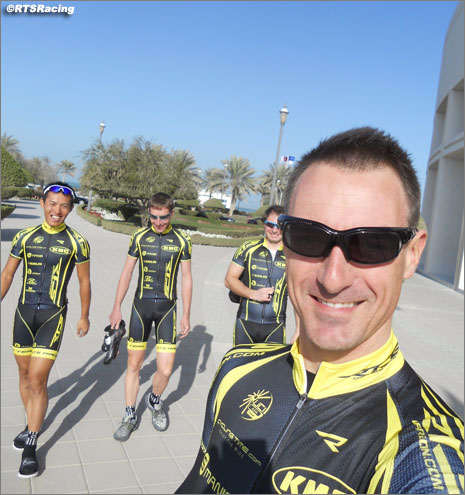 What’s up? I enquired.

We shouldn’t be here… was his simple, pessimistic reply.

I kind of knew what he meant…

The previous day I headed down to the bike tent, set up in the car park of the Ritz-Carlton, where we are to be luxuriously accommodated for the next five days. A big dude rode past me on an Eddy Merckx.

It was Eddy Merckx.

Surreal, and kind of intimidating. 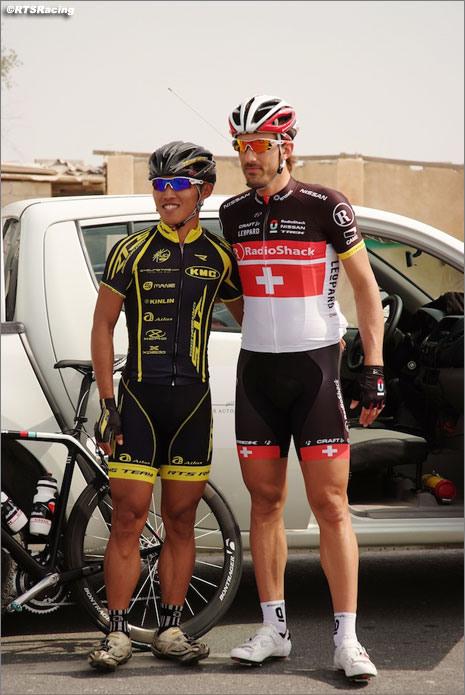 But no, dagnammit, we do deserve to be here. We might be only a Continental team surrounded by WorldTour outfits, but we were the third best in Asia the past two years. And even if you discount that, these guys’ legs go round just like ours, their backsides hurt after 150km just like mine does, and – well, that may be where that argument peters out, but heck, I’m not bowing down to anyone. 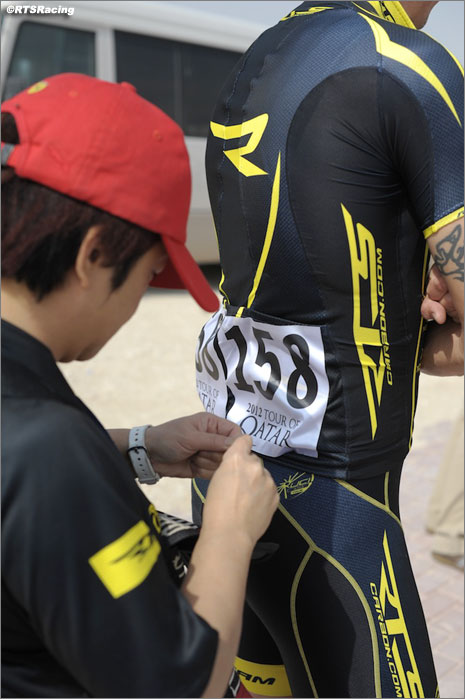 Now, having said that, I understand exactly what he meant. We’re eating muesli and quaffing coffee with the History Makers. World Champions. Paris-Roubaix winners. Classics Kings.

I’m trying to act cool when Mr. Rainbow walks past and nods, and when Eric Zabel asks where I got the jam for my croissant. I’m a massive fan of this sport, and here I am, in a dream. We are here, and this is why we do it.

4km of neutralization led us to the real start of the 140km stage from Barzan Towers to Doha Golf Club. The Adam Hansen of Lotto-Belisol let rip, much to the delight of the peloton, who ‘Whoop!’ed him on, kind of teasing him for such early season exuberance. That was kind of cool, I thought. 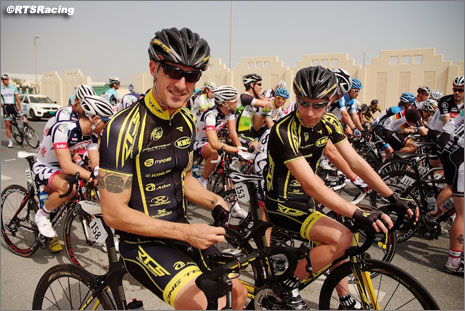 The peloton then settled into granny-mode for the next 40km, after which point things got hectic real quick. Riders began flying along the side of the pack, jumping curbs and desert rocks, and the stink of 512 brand new carbon brake pads filled the air. To say it was nervy would be an understatement. I saw my life flash before me several times (which is a little depressing, as I’ve been around 40 years and thought it might have taken longer than an nano-second), as I fought up the side of the pack only to be swamped and forced back into the middle, where knuckles sat wedged into other riders’ thighs, so close were we riding.

The reason for this mad rush? A left turn – and an anticipated cross-wind. One of those furious, thrashing forces sent to the scorched earth to torture the shaven-legged men of this world. Back wheels locked, curses flooded the eardrums, grown men yelped.

We finally turned the corner and…. er… no cross-wind.

All that shredding of my nerves for nothing?! 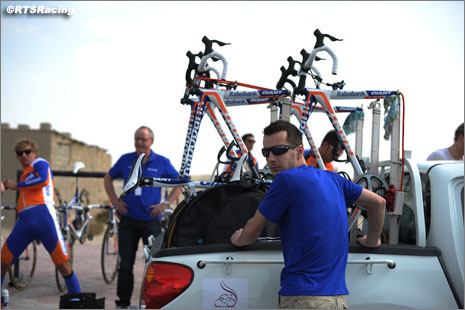 Then we settled in once gain. Then, at 50km, I hit the deck, flew into the back of some Garmin rider and some others but was unhurt, unlike my bike, whose back wheel punctured. After an 80km/hr 8km chase behind the team car I got back on only for the previous crazy charge of the light brigade to be repeated, this time before another left at 66km. Sitting at the back with my RTS teammates though was not the best idea, as there was an almighty crash that saw a Rabobank warrior taken to hospital (cause of the crash? Carbon handlebar fail, I heard, clean snap). 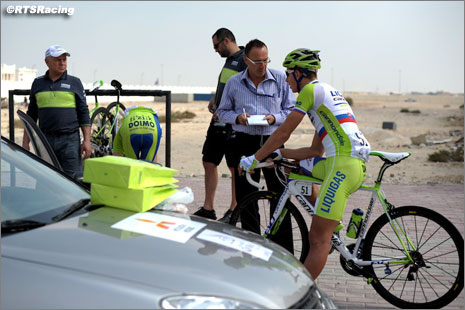 None of my team went down but we may as well have, as the peloton split into two groups, with us stuck with the 40 or so at the back. And guess what? The cross-wind appeared. Fierce. Battering. Ugly as Steve Tyler in drag. We set up an echelon and hit a steady 54-57km/hr against that driving wind. Truth be told, it could have been even stronger, but it was enough to make me hurt plenty, thanks very much…

After maybe 30km of chasing, we somehow got back onto the main pack. I was sure we were now in the second group. Content to roll in over the last 20km, I started to look around me a little. Cavendish really dances on the pedals – I’d heard he is an expert at energy conservation and saw it in action. The Rainbow is something to behold, too, a sight I’ll never forget, sat three feet in front of me… 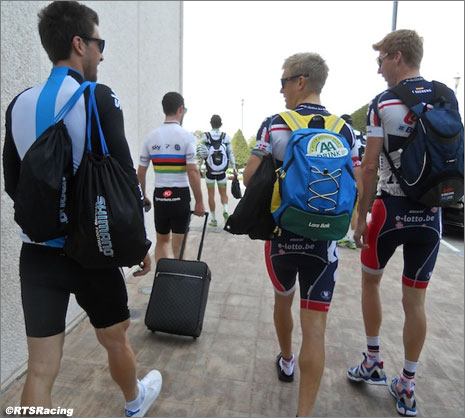 Cancellara was wearing his Rainbow Splatter Oakleys and looking very dapper indeed. His moves like a symphony on two wheels, upper body motionless but powerful, rumbling, whilst his legs brood, thunder building in there to be discharged, held deep within those monumental muscles.

And Van Summeren, skinny like you wouldn’t believe but – he won Roubaix. 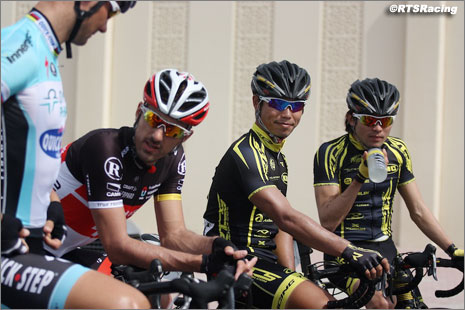 Boonen, a big dude, seriously. A covering of muscle everywhere and too good -looking to boot.

These whimsical observations were soon brought to an abrupt end by a sudden surge of speed with 15km to go. I wondered why we were building for a sprint that would hand the ‘winner’ 20th place, at best, what with the group up front. Daft as it seemed though, we plowed on, beating the last 2km like it’d offended our mothers, everyone’s heads now bobbing with the effort to stay in contact.

“Who won?” I asked a guy from Radioshack-Nissan-Trek at the end.

Eh? But…. oh. I was in the first group. I had no idea. I finished 97th, same time as Boonen, as did the majority of my team. Not incredible but not too shaby, on reflection. 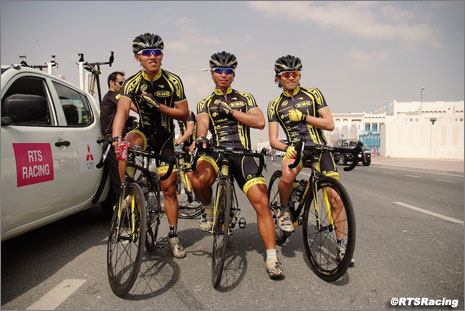 A little introduction. My name is Lee Rodgers and I have lived and worked in Asia for 13 years now, working a variety of jobs (scuba instructor, English teacher, journalist).

I ride for RTS Racing Team and have been riding and racing for 4 years (after an 18 year lay off after leaving the sport at 18).

Toolbox: Are you Ready to Race?