There were so many questions before today’s L-B-L, who has the form, who can last the distance, who would be killed off by the weather and the hills? But I don’t remember anyone asking if Maxim Iglinskiy would take the biggest win of his career and add to Astana’s, so far, great season. Nibali was close, but the Kazakh was the man!

The action started early, or should I say ended, for one rider – the unlucky Basque, Igor Anton (Euskaltel-Euskadi), crashed in the neutralised zone and had to abandon with a broken left collar bone before the start proper.

After a few doomed attempts of a break away, six riders took a lead of well over 12 minutes after 80 kilometres of racing. They were: Dario Cataldo (Omega Pharma – Quick-Step), Simon Geschke (Argos-Shimano), Kevin Ista & Gregory Habeaux (Accent.Jobs-Willems Veranda’s), Reinier Honig (Landbouwkrediet-Euphony) and Alessandro Bazzana (Team Type 1-Sanofi). Behind them Katusha, BMC, RadioShack-Nissan and Movistar (all the teams you would expect) were giving a half-hearted chase.

The lead group reached Bastogne in a heavy rain shower just after 1 o’clock and started their much harder return journey to Liиge and its ten categorised climbs with a lead of 10 minutes on a slightly more animated peloton. 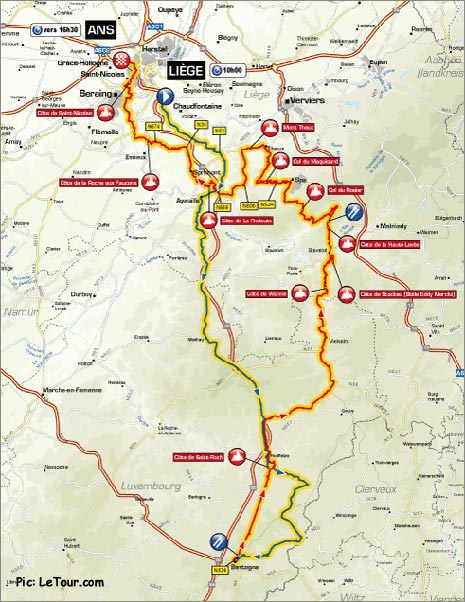 As the leaders approached the summit of the Cфte de Saint-Roch (140 K’s to the finish) they had been pulled back to 7 minutes by mostly Katusha for their man Joaquim Rodriguez. Simon Geschke of Argos-Shimano was first over the summit of the Saint Roch with thousands of fans lining the steep 11% climb.

Up the Cфte de Wanne, Reinier Honig led most of the time as the escapees advantage came down to 5:25 as the French ProConti Saur-Sojasun put two riders on the front, Liquigas-Cannondale, Rabobank and RadioShack-Nissan were also close to the fore keeping tabs on the action as the race entered what is normally the decisive sections.

Next up was the Cфte de Stockeu with 90 kilometres remaining of the race and the leading six were then down to 4:40 on its 12% slope. Bad luck for Simon Geschke as he crashed on a bend at the start of the climb, he remounts and gives the thumbs up to the camera, but he was pulled back by the peloton. Olympic champion; Samuel Sanchez needed a bike change as his Orbea had broken; he did regain the main field as RadioShack put the pressure on the front.

At 75kilometres out, the leading five had 2:32 from the three a minute in front of the peloton as they approached the Col du Rosier.

RadioShack gave way to the BMC team, for Philippe Gilbert, at the front of the bunch as the three chasers caught the five with 70 kilometres to go, giving us eight leaders at the top of the Col du Rosier with a lead of 1:27.

Lotto-Belisol also started to help out with the chase work with the climb of the Cфte du Maquisard, which is 2.5 kilometres long with an average rise of 5% – at 57 kilometres out as the rain started to fall again. At the back Alejandro Valverde (Movistar) had his leg warmers and rain jacket on with full winter gloves showing that today might not be for the riders from the South. Up front, his team mate; Vasili Kiryienka was working hard with the leaders as the bunch was in one long line behind the Lotto team. 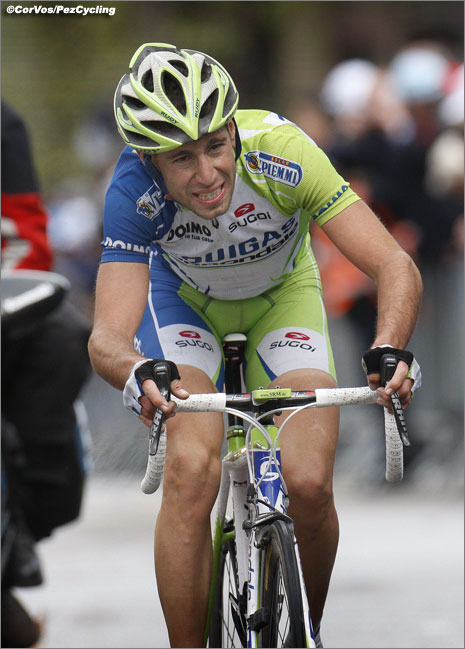 A less than spectacular race became a free for all of awesomeness with Vincenzo Nibali’s great move on the Roche aux Faucons.

Next climb was the Mont Theux at 52 kilometres with a rise of 5.9% at 2.7 kilometres long, BMC at the head of affairs pulling back the break to 1:16 as Gregory Habeaux (Accent.Jobs-Willems Veranda’s) was dropped by the break, followed by his team mate Kevin Ista not long after.

Philippe Gilbert dropped to the back of the bunch to his car for a change of glasses and arm warmers. At the front Mads Christensen (Saxo Bank) attacked the peloton but had a gap of over 1 minute to close as the race neared the La Redoute, Frank Schleck (RadioShack-Nissan) was at the back messing about with his radio ear piece.

On the La Redoute, GreenEdge and Garmin-Barracuda started at the front, but it was a Katusha rider who made the first move as the lead was down to 52 seconds at the top. The lead group split with Rolland and Kiryienka taking off to be joined by Cataldo. Valverde had to change bikes with a team mate on the climb with a probable chain problem. Van Garderen (BMC) was the man who was doing the damage with Gilbert on his wheel and Vanendert (Lotto-Belisol) close by. 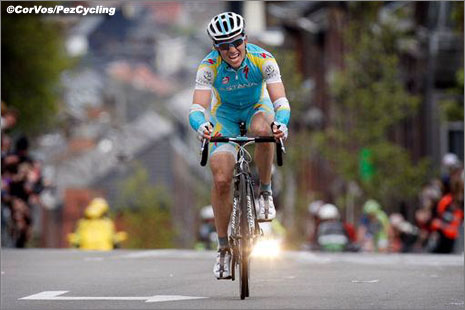 Nibali seemed to have the race sewn up, but Iglinskiy had more than enough to bridge across to the Italian, and then immediately drop him heading into the final kilometer.

30 kilometres to go and the three leaders (Kiryienka, Rolland and Cataldo) had 48 seconds on the bunch as the race heads towards the Cфte de La Roche aux Faucons. Santambrogio joined Van Garderen in front of Gilbert as BMC took hold of the race with Nibali, Rodriguez, Cunego, Sanchez, Gerrans, Martin, Voeckler, Van den Broeck, Vanendert and around 30 odd other riders still in contention. It looked like Frank Schleck and Valverde had missed the important split.

20 kilometres to go and the three break-away’s were caught on the Cфte de La Roche aux Faucons under the impetus of Van Garderen again, Rolland being the last to be hoovered up. Vincenzo Nibali (Liquigas-Cannondale) put in a strong effort on the front splitting the peloton even further and it was all together by the top. 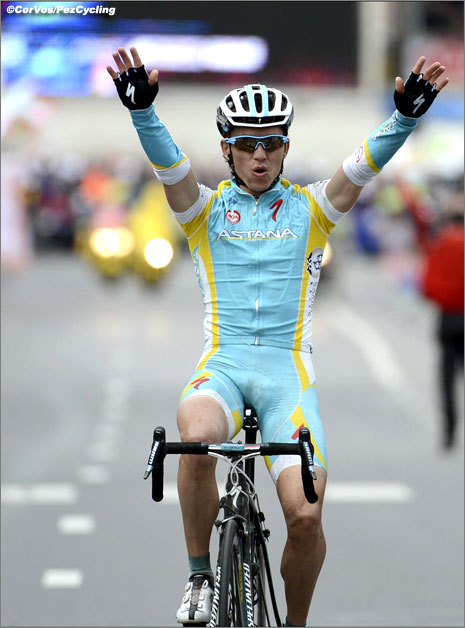 Nibali dropped down the other side causing confusion in the chase, with around fifteen riders looking at each other to ride. Six riders take the plunge; Mollema (Rabobank), Morena & Rodriguez (Katusha), Gasparotto & Iglinskiy (Astana) and Voeckler (Europcar). The Gilbert group did get organised to close up, but the race at this point was wide open with the last climb of the Saint-Nicolas to come.

10 K’s To Go!
Nibali had 40 seconds on the group with Rodriguez (Katusha) and Iglinskiy (Astana) between. Dan Martin (Garmin-Barracuda) and Rolland (Europcar), but the Frenchman was no help to the young Irishman. Amongst the chasers no one would take the lead as Rodriguez cracked and was dropped by Iglinskiy. Gilbert and Sanchez were also struggling as Nibali stretched his lead to 50 seconds.

Dan Martin had to do all the riding, passing Rodriguez with Rolland still clinging on to his shirt tails.

Under the 5K banner and Nibali was in the sight of Iglinskiy. Martin, Rolland, Voeckler, Cunego and Vanendert were together but not closing on the other two. 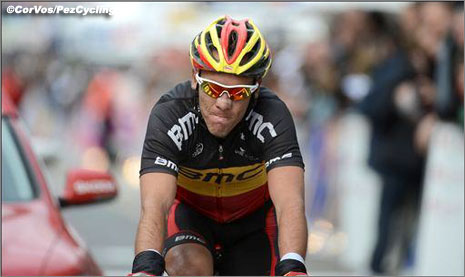 A not so pleased, Philippe Gilbert, crosses the finish line.

Nibali was caught by Iglinskiy with less than 2 kilometres to go and then Iglinskiy attacked him as they reached the red flag of 1K. Nibali had nothing left to stay with the Kazakh and struggled to keep moving towards the line.

A tired Iglinskiy freewheeled over the line for the biggest win of his career, Nibali was OK for second; 20 seconds later and then Gasparotto took the group sprint for an Astana 1st and 3rd. Philippe Gilbert finished on his own and quickly disappeared into his team vehicle. 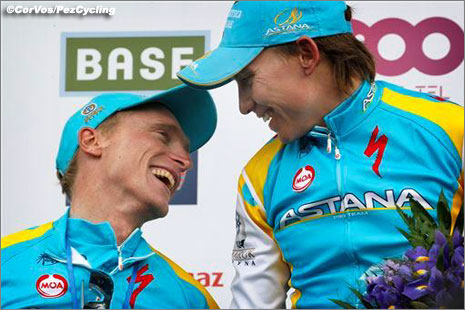 Astana went 1st and 3rd with Iglinskiy and Gasparotto.

So Astana’s Maxim Iglinskiy won an exciting Liйge-Bastogne-Liйge, not a big surprise as he has been there or there about for a while, but he is a new name on the Classic winners list.