Our Italian correspondent and super fan, Ale had big expectations about chasing this year’s Giro di Lombardia and although the weather wasn’t quite as hoped the racing was simply superb. Now that’s he’s dried off it’s time to re-live the action from a great day of racing through Ale’s report on his day – Roadside!

It’s not the same as it happens to me when I wait the Sanremo but also Lombardia gives me a lot of expectation, especially because the last race I chased was the Giro some months ago. The long summer break was over the moment I received the accreditation by RCS. A cold e-mail which fires the imagination. 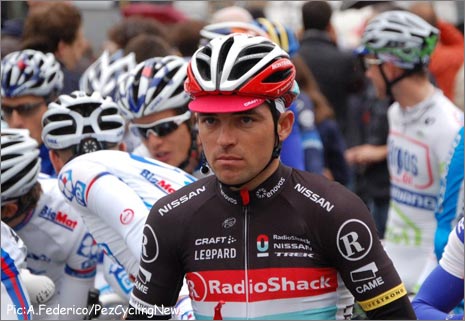 Last year’s winner Olivier Zaugg didn’t receive a cold email from the RCS as an invitation like Ale but he did receive some cold weather at the start, at the 1/2 way point, at the finish…

Maps, google map, old reports, altimetry and a week of deep study. How many passages, how long the time, the shortcuts; everything studied in detail. So, here I am, four o’clock in the morning and the same question I ask every time. Does this race deserve this wake up sacrifice? I jump in the trousers, no shaving, no even washing my face and I head north to Lombardy region. There’s a race to chase; it will be a wet, nasty, dirty race. Let’s do that! 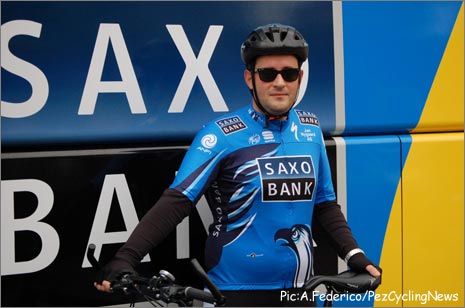 Fans come in all shapes and sizes in Italy.

While I approach Bergamo I remember the last time I was here was with Pez himself, at the Giro 2007. Seems like yesterday, but already 5 years are over. It’s early when I come to the departure village but isn’t cold. Cloudy but not rainy. It’s a nice September morning and the city is still quiet. The old town above it’s really beautiful and I think it’s a pity this race doesn’t finish here anymore with the walls final circuit. Last time was in the 2003.

While the first team buses start to come I meet my friend Angelo; he is an amateur photographer who’s doing a great job. I think he is a rising star and you’ll shortly read about him also somewhere else. We keep the opportunity to talk a bit. I feel we are friends since a life, but we’ve met just one time before (Sanremo departure) and we really don’t know anything about each other. He is a frequent reader of Pez and I frequently visit his Flickr album. So that’s how everything started and we are now together talking about our families, our life and our love for cycling. The coffee it’s warm and tasty, here we go, we can start our adventure. We decide to spot together the departure and then we will keep in touch during the race chasing.

The plan is to watch three crucial passages: Valcava, Sormano and Villa Vergano. The Valcava is a nasty climb close to Bergamo. It’s the first of the day and probably won’t tell anything special but it’s pretty steep, very bad paved and, today, terribly wet. 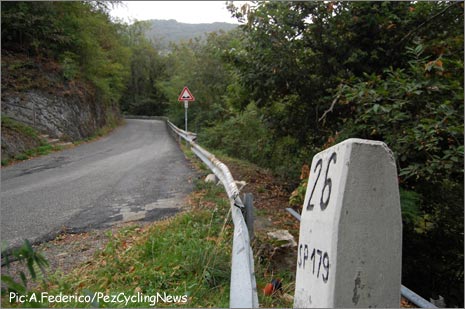 The Valcava climb provided a rude awakening to the riders.

The forests all around are covered by walnuts and you can smell, even from the road, the mushrooms. Passing near the houses the smell of a fire comes out from the small funnels. It’s autumn, and everything is going back to the silence.

The mountain above it’s dark and today I’m very happy to drive a warm car. There are amateur cyclists, but few compared to last year. It starts to rain when I come to the place I selected and practically, it will never stop till the end (and even later on…). There’s a break ahead, as it usually happens but the bunch is controlling. Two, three minutes, no more. 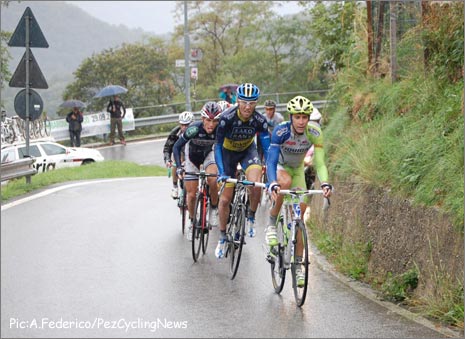 The break suffers their way past Ale in the rain.

The break comes and the bunch also but I immediately realize that… they are few. I watch with my eyes at least 10 riders abandoning the race, but several others have done it previously. It’s the end of a long season, a hard race and a rainy day; there are a lot of riders participating without a piece of chance to win. 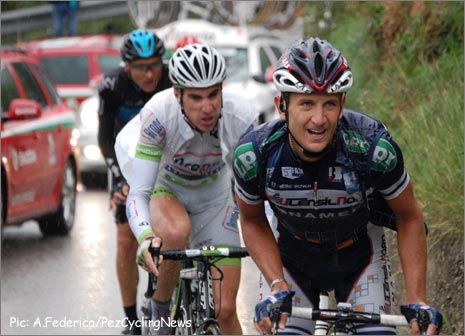 These guys already have no chance but they are still giving 110% to try and get back on.

The descent back is really nasty. A pro in front of me risks at least 2 times to crash. I just imagine myself on that bike for a moment and I realize how hard it’s this sport and how much these guys deserve our support. 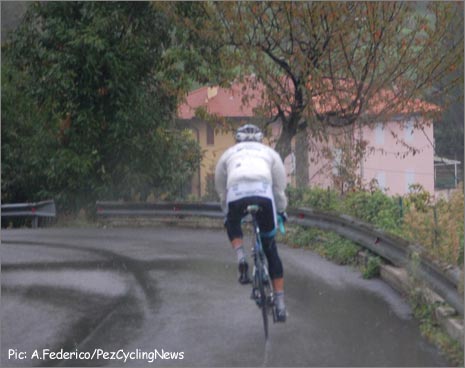 Off the front or off the back these guys earned their salary and the public’s respect today.

I drive towards Lecco to next destination: Muro di Sormano. I have seen a lot of climbs in my life. I’ve even ridden the Mortirolo, but I have never seen anything like the Muro. Two kilometers of craziness. The road is really very narrow and it’s difficult to imagine how steep it is without watching it. 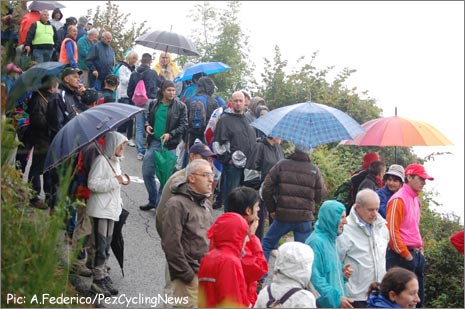 No trick photography here folks. The road really is that steep!

They haven’t ridden this climb since the 60’s (and now I understand the reason), and despite the bad weather there are a lot of people of any age. Old and young.

Some Belgians also, here for Gilbert, I imagine. Anyway the most are local but there is a certain number of foreigners.

When the race is coming the clouds start to rise and to cover the road. What a pity, with a clear weather we could see a wonderful view of the Alps and the first fresh snow. But with the fog the race it’s even more epic. The break is caught and just two are still in front. 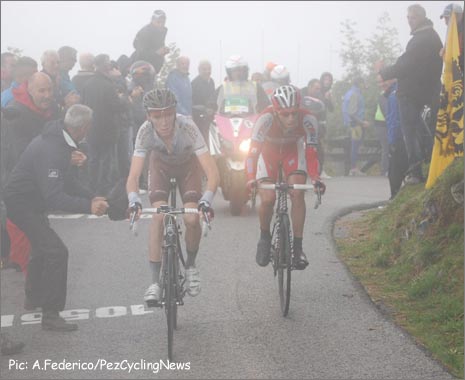 The day’s break was down to just two riders at this point. 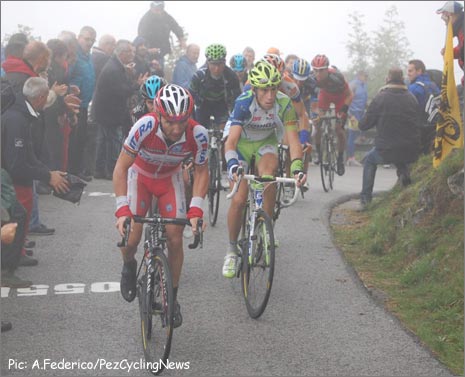 But they were closely followed by Rodriguez and co.

The group of the favourites selected to eight, ten people maximum. Nibali is there, Rodriguez and Contador are there. The world champion not. 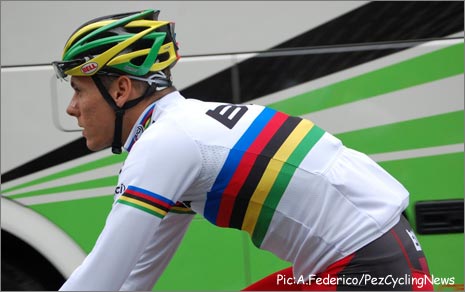 Gilbert looked cool and calm at the start but crashed out on a wet descent.

He is suffering behind. This is not his climb. While I walk back to the feet of the Muro, where I parked the car, I start to feel pain to the legs. I can’t imagine how my legs would feel climbing the same road on a bike.

Now the target is another one. Get in time on the last climb. Villa Vergano. Nothing epic as the Muro, nothing as hard as the Valcava. But this short climb it’s at the end of a long race, which was very selective also for the weather. I’m sure the race will be decided there. Over that road, despite the rain, there’s a lot of people, and what surprises me more, people of any age, both men and women. This is a good news; an Italian woman waiting a cycling race under the rain… any chance it can happen to my wife?

When the leading group (which, at this time, is the only group survived) comes the rain which starts to fall heavily. I abandon the umbrella to take the pictures of the epic moment of this edition, and I really feel under the shower. 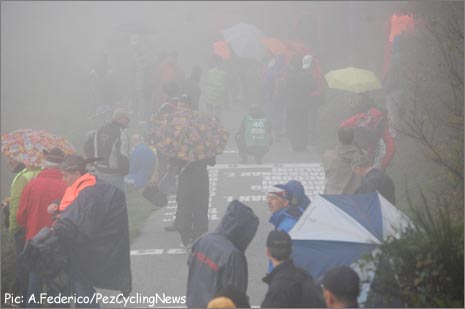 Anyone on that climb is in that condition (wet) but all the tifosi remain there. There is a lot of respect for these guys riding hard and honoring the Lombardia. 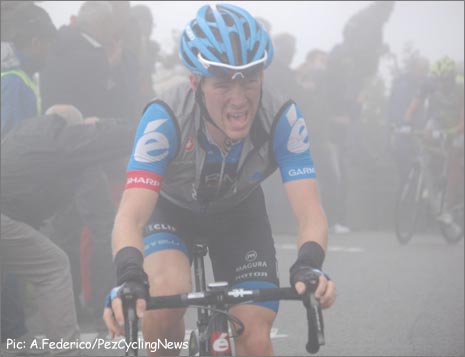 There were a lot of contenders for ‘best pained expression’ today but this one may have taken the title. 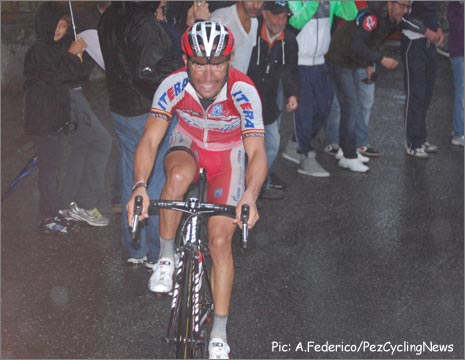 Possessed? Nor the best riders in the world, nor some shocking weather could stop Purito from claiming the win today. He was simply superb

Passes Rodriguez, passes Contator, Basso, Nibali. Once the last one passes everybody starts to run towards the car, or the bar, or a dry place. I get in the car and outside it’s dark as in the evening. I read Pez’s updates on mobile, I keep knowledge of the winner and I start to drive back to home. It will be a long drive in the night. But so sweet was the day!