After another great edition of La Classicissima Ed Hood immediately picked up the phone for some words from within the peloton. To get a better idea of the race that was, he spoke with BMC’s George Hincapie and Team Type 1’s Kiel Reijnen. Read on!

Hincapie rode stagiaire with Motorola in 1993 before going full pro with the team in ’94 – our research would indicate that his first of those 16 rides came in 1995, when he finished 133rd.

This year he finished 33rd at 20 seconds.

Remarkably, his is not the record for the number of Primavera starts– that belongs to Italian Wladimiro Panizza who between 1967 and 1985 lined up for the race to the City of Flowers no fewer than 18 times.

But when it comes to a man to go inside the Primavera with, then Mr. Hincapie has to be our choice.

Despite having 300 K in his legs and needing a massage and a large bowl of pasta, the 38 year-old South Carolina resident found a little time to give PEZ an insight into the race.

PEZ: Do you remember much about that first Primavera George?
George Hincapie: I was on Motorola and I remember I rode in with the second or third group.

Miguel Indurain was in the group and I remember thinking that was pretty cool – but that’s about all I can recall. 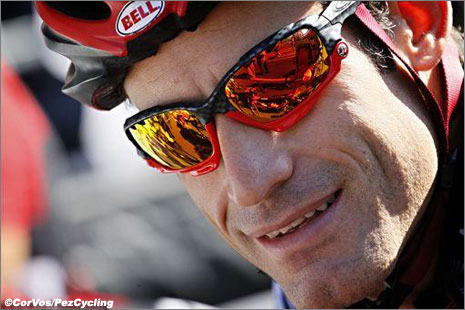 PEZ: Do you like the race?
GH: I like it in the sense that it’s very historic and very scenic – that must be one of the most beautiful coast roads in the world.

It’s not a race which suits me that much but it’s a great way to put in a 300 kilometre day before the Northern Classics start.

It’s always hard racing and at the finish everyone is tired.

But yes, I like it; it’s a beautiful race and a very hard race to win, for sure.

PEZ: Is there any edition you remember as being particularly tough?
GH: The one big thing about Milan-Sanremo is that it’s always a very nervous race – you have to stay at the front, particularly as you approach the main climbs.

There are always huge battles for positions and splits in the peloton on the climbs and descents.

The introduction of the La Manie climb has changed the race a lot – they get rid of pretty much half of the peloton going up there.

That means that there are lesser battles going in to the Cipressa and Poggio – but it’s a really big battle into la Manie. 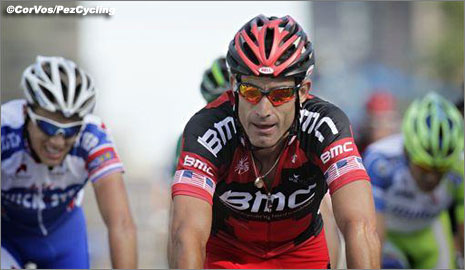 PEZ: What was the BMC game plan?
GH: We wanted to make it a hard race, Philippe Gilbert and Ale Ballan are riding really well –and so is Greg Van Avermaet.

We decided we’d put pressure on over the top and on the descent of La Manie – then see how it played.

But unfortunately, it wasn’t our day – I went down with 50 K to go, but got back; Phil crashed with 30 K to go and Greg crashed in the last few hundred metres.

But we still had Ale Ballan in the top ten. 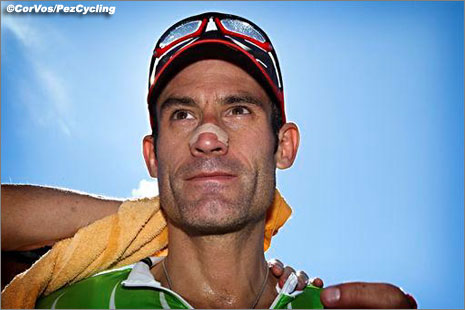 PEZ: Did Cav going off on La Manie change the pattern of the race?
GH: There were a lot of teams interested in stopping him from getting back, that’s for sure.

But it simply wasn’t his day.

I think his being dropped didn’t affect the final result – the best guy won.

PEZ: What now for you, George?
GH: Next weekend is Gent-Wevelgem then the Tour of Flanders and the following weekend Paris-Roubaix. 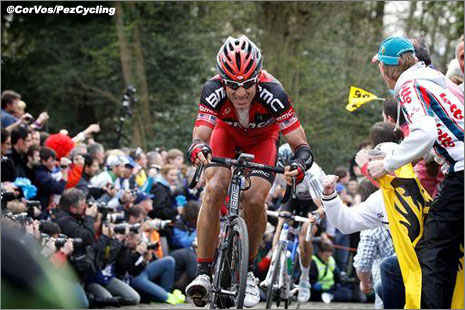 Next for Hincapie? His favorite races – the Northern Classics.

PEZ: What’s still on the George Hincapie ‘to do’ list?
GH: I’m still super excited to be on this team with all these big names we have.

And I’m glad to be back to riding well, again – I felt that Tirreno got me back to race fitness and now I’m looking forward to seeing how I perform in the Northern Classics.

*******
And at the other end of the spectrum, in his first Milan-Sanremo was Team Type 1-Sanofi’s Kiel Reijnen.

The 25 year-old American won the Tour of Thailand in 2010; but last year started badly for the man from Bainbridge Island, Puget Sound, Washington when a mystery virus floored him – but there was a happy ending to 2011.

PEZ: Last year was pretty rough for you, Kiel?
Kiel Reijnen: It was miserable, for sure!

But the team stuck by me and I had a lot of support from friends and family.

They never really fully figured out the illness – it was a virus which just had to run its course. 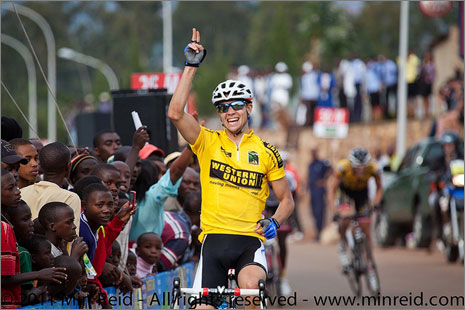 Kiel enjoying success at the Tour of Rwanda last fall.

PEZ: But the year ended well, you won the Tour of Rwanda with four stages on the way?
KR: I went there trying not to have any expectation but I wanted to do a good ride.

It was my first race in a year and whilst it was pretty miserable not to race due to the illness, sometimes you come back fresh and the year out does you good.

Another thing in my favour was that it was so late in the season that a lot of guys were tired, I guess.

PEZ: Let’s talk Primavera – what was your longest race prior to Saturday?
KR: I rode a stage in the Tour of Hainan, two years ago which was 230/240 K, but it was late in the race so it seemed much longer.

Up until Saturday, that was my longest race. 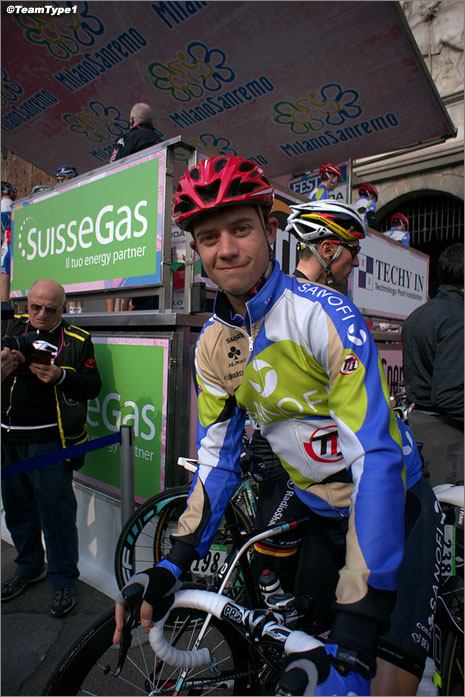 Kiel before the start of Saturday’s Milano-Sanremo.

PEZ: What was it like at the start?
KR: The whole circus is a bit intimidating, lining up with the best guys in the world.

We held a training camp in the area the week before, so I knew what the roads were like, I really like long rides so I was treating it as an adventure.

But the thing that surprised me was that despite it being 300 K, it goes by a whole lot faster you think it will.

PEZ: What about that long haul across the plains.
KR: I think it’s an unbelievably beautiful route, once the break went there was a lull and it gave me a chance to eat, drink and get my body ready for the torture to come.

PEZ: What did you eat and drink during the course of the race?
KR: I started with full pockets, I was back at the car three times and there were two feeds.

If you’ve not done a mileage like that before then you do your best to make sure that you get enough nutrition – but with 15 K to go I was getting dizzy and starting to bonk. 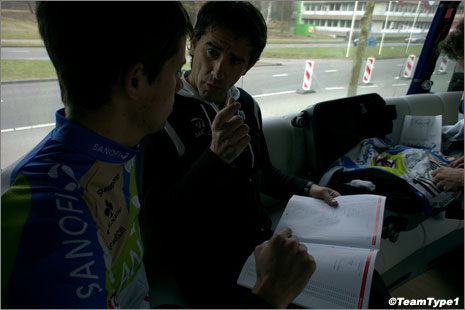 PEZ: What’s the Turchino Pass like?
KR: I thought it would be pretty sensible, but it was actually very nervous.

There were wheels touching, brakes getting jammed on and sudden accelerations.

It was good to get on to the coast road because the tempo steadied up.

PEZ: And la Manie?
KR: We climbed it half a dozen times in training; it’s very narrow and the problem is that you go from four lane highways to single lane road as soon as you take the turn – very dangerous.

The fighting for position actually starts 10 K before the climb.

I didn’t come off but I had to lean on a straw bail at the turn while the mess cleared in front of me.

I took the turn as 70th or 80th wheel which isn’t ideal but it was good enough.

The thing is that the climb is bad enough but the once it gets back on the coast road it just goes wild.

Liquigas saw that Mark Cavendish and Tyler Farrar had been distanced and didn’t want them to get back. 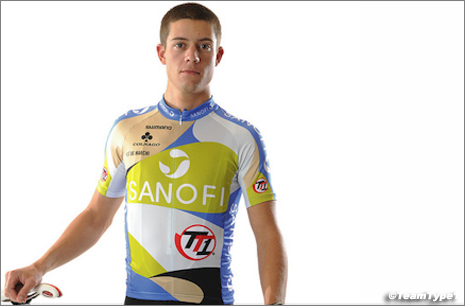 PEZ: Cipressa?
KR: It gets easier by then because there are fewer guys and many of them are tired and less keen to fight for position.

La Manie is really tough, but the Cipressa run-in isn’t so dangerous, the roads are better.

But near the top Gilbert came down – I didn’t, but I had to stop to avoid the melee.

It really strung out on the descent and once we were back on the coast road it was like 70 kph.

Around five K after the bottom of the Cipressa some guys popped in the string in front of me and that was; ‘goodbye, that’s all she wrote’ time.

We chased and the gap was about 15 seconds at the bottom of the Poggio but I’d hit the wall by then.

I was bummed not to get over the Poggio in the peloton but it just goes crazy off the Cipressa. 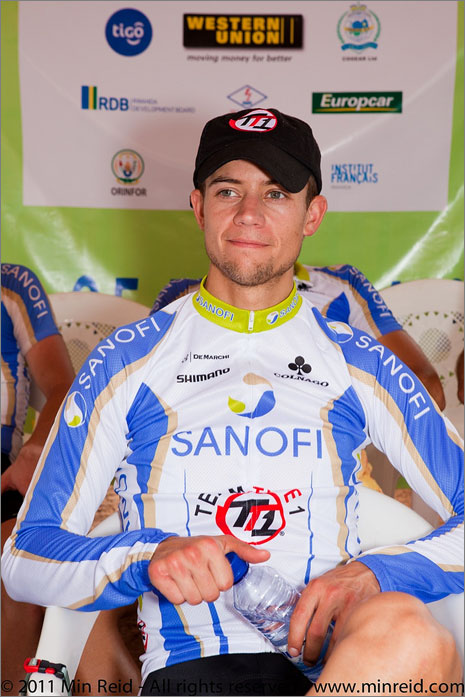 PEZ: How do you recover from a 300 k race?
KR: Sunday was pretty much all travel and then I went out to get the groceries but forgot that all the shops are shut in Girona, on a Sunday.

I had to make do with a big bowl of rice.

Today I did a two hour spin – but I have the feeling that if I’d gone hard then my legs would have really hurt!

PEZ: Beautiful race or horror story?
KR: I really liked the Strade Bianche. But with the course and the crowds, Milan-Sanremo is the most beautiful race I’ve ever ridden.