Sometimes the stars just align and everything falls into place – and right now the cosmic cycling gods are queuing up over Great Britain. Let’s get down on the road to see how it looked for GrupettoItalia’s Nick O’Brien on Saturday.

With the historic Tour “one two” at the Tour and the opening event of the London Olympics being the Mens’ Road Race, the UK is very much the focus of world cycling and with Team GB poised for even more gold over the coming weeks it seems British Cycling can do no wrong. Any Olympics are special but when they take place in your city and you can share the experience with family and friends then you know you are in for a treat. What better excuse do we need to lock up the office at Grupetto Italia HQ and ride out with our best cycling mates to see if Cav and the team can pull it off. 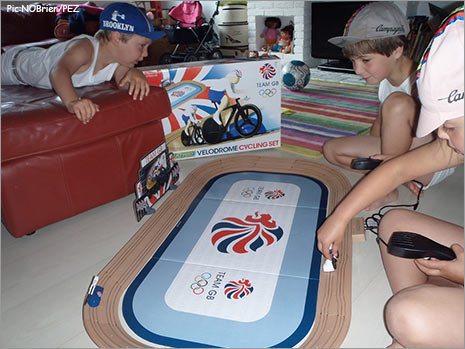 I’m Wiggo you are Cav, no I’m Wiggo and you are Cav… The build up to the London 2012 Olympics especially the cycling events has been huge with my own kids now preferring bikes to the more traditional soccer (and I really haven’t twisted any arms – honest)! 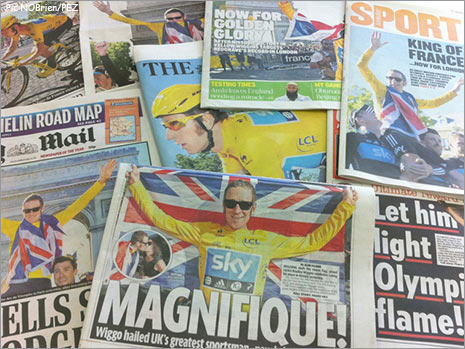 Even before today’s Olympic road race the press have been going bike mad with the patriotic call for Wiggo to be made a knight, Sir Chris Hoy chosen to carry the Flag for Team GB at the opening Ceremony on Friday, and Victoria Pendleton appearing in her own BBC documentary.

Our plan is to start early (the downside of any Olympics is traffic chaos ) as it’s being reported that literally over a million spectators will line the entire route for this free to watch event. The race starts and finishes in the heart of London, along the Red tarmac of the Mall in front of Buckingham Palace – winding its way South west into the countryside of Surrey. Our target is the Box Hill circuit which will be covered 9 times and contains the only real climb on the 250km course. 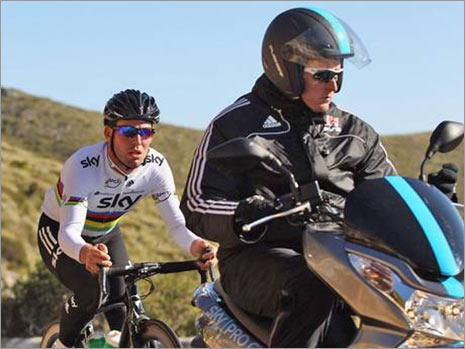 In the week leading up to the Olympics the Bookmakers favourite has been spotted training around Box Hill, not far from the Team Sky / GB holding hotel in Surrey.

Naturally quite a few other fans are aiming for the same area so we decided to drive down to within about 30km and ride in from there. Word amongst local riders is to get there at least 3hrs before the race is due at 11.00 (tents and Alpe d’huez style campers had already been pitching up the week before) and claim your patch of Surrey roadside. Indeed there have been sightings all week of teams training on the circuit and the whole area has been a mecca for London’s cycling community for the past 6 months.

Once we’ve parked up and set up our bikes the excitement is all around us. 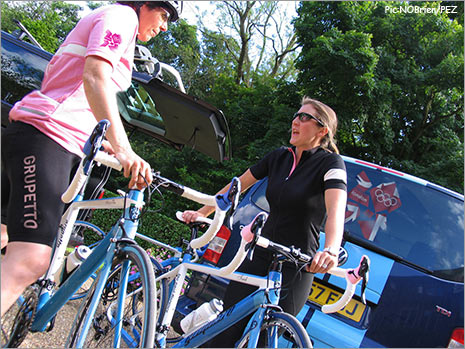 As we park up and prepare to ride down to the circuit, The Grupetto ladies squad reveal their own Olympic kit and bikes with dashes of “fuscia pink” to match the London 2012 logo.

Once on the circuit a few of us lock up our bikes and change into civvies with a view to sneaking up to Box hill – tickets have been like gold dust with limited numbers – for the climb area but we have been tipped off by a local source that there is a “way in” involving a hike across fields, hopping a few fences and crawling through undergrowth. 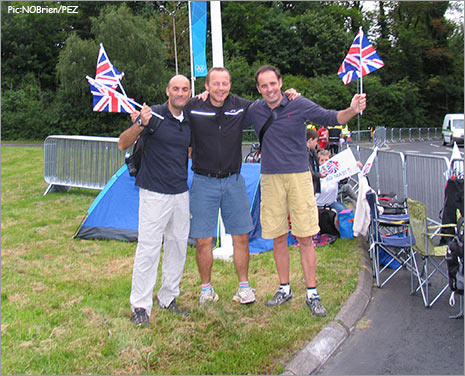 Unfortunately the tipster forgot to inform about the miles of security guards, police barriers and an irate farmer who greeted us with a welcoming “[email protected] off my field”. Time for coffee and a rethink, but we quickly stumbled upon Ye Olde village of “Micklesham” – our prayers were answered we had everything a cycling fan wanted – enough of an incline to slow riders, a convenience store, Italian restaurant serving great coffee and the clincher: “ The Running Horse” Pub with a hog roast that quickly became our perfect location for watching the 2012 Olympic RR. And as it was only 1 mile away, Box Hill could keep its fancy elitist tickets – we where going to soak up the atmosphere with our new best friends down the road for the next 4 hours, grab a pint and enjoy the party. 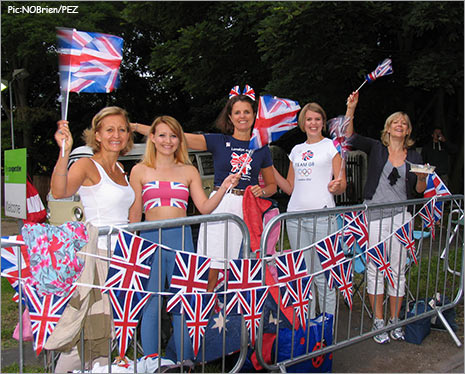 It seemed like everywhere you looked you saw red white and Blue today – London is off to a flying start. 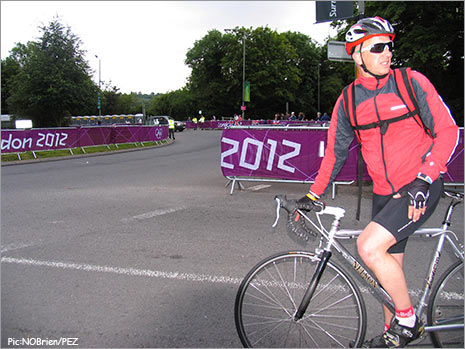 Pssssst…. Follow me I can get you onto box hill, no questions, no tickets, NO chance! 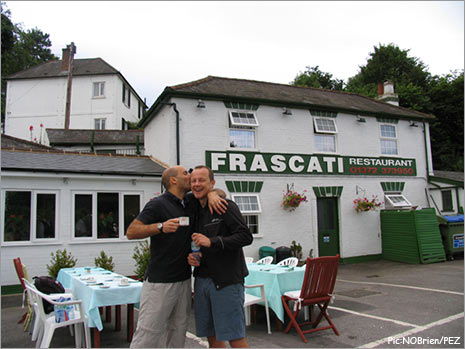 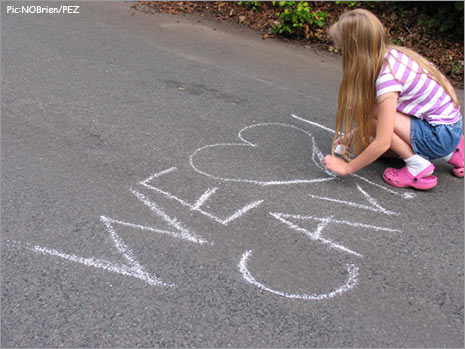 It was supposed to be CAVs day today – a nation urged him on, the only trouble was every other nation just sat on. 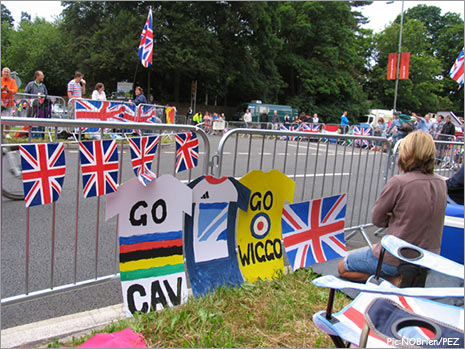 Despite the result today Team GB are still the local’s favourite team, with rainbow bands and yellow jerseys everywhere. 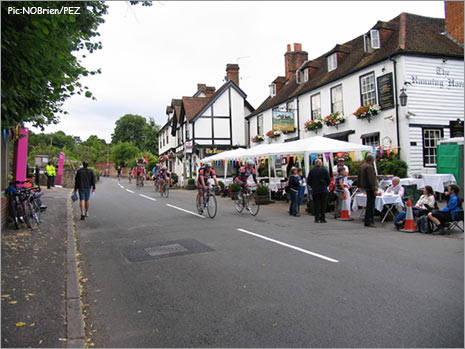 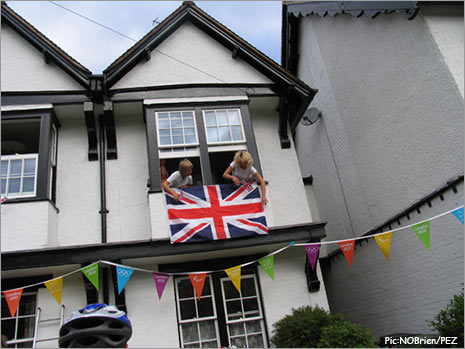 Get ready – Team GB are coming. 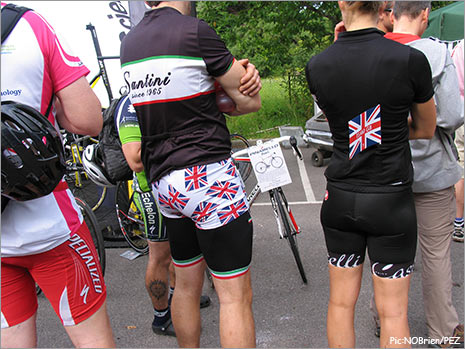 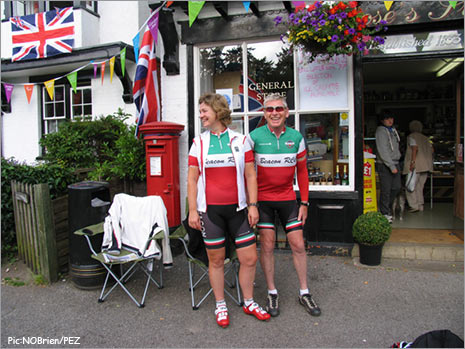 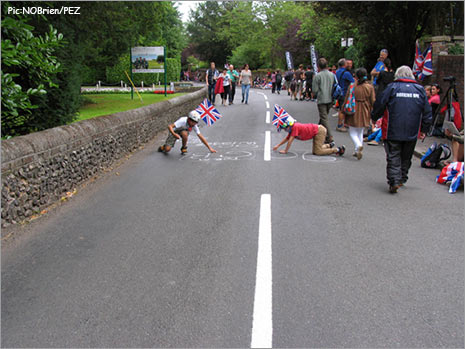 The good people of the village pave the way. 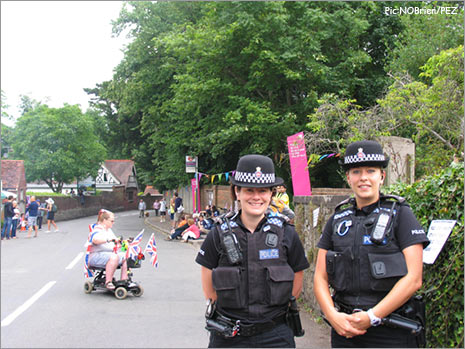 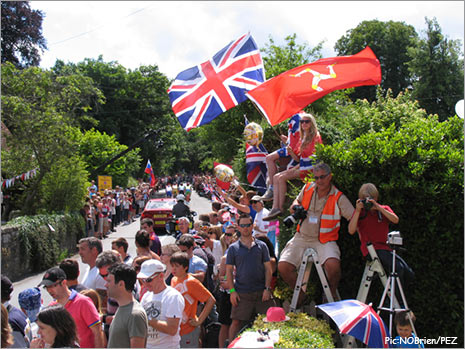 As the break disappears off to the finish , Team GB and the Isle of Man will be back to fight another day. 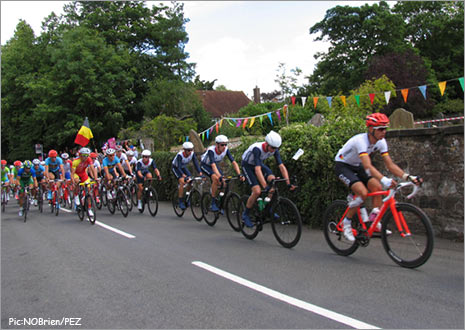 Despite some late assistance from Germany – there is only so much that the 5 men of Team GB could do against a 30 man break of some of the world’s best one day riders. 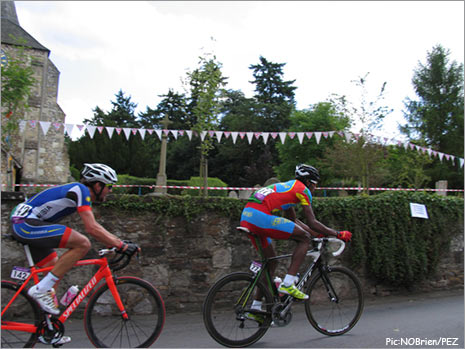 One of the real plus sides of the Olympics is you get to see riders from smaller nations competing against the big boys, unfortunately these two African riders were so far down they were in danger of being lapped … yet got the biggest cheer every time they came around. 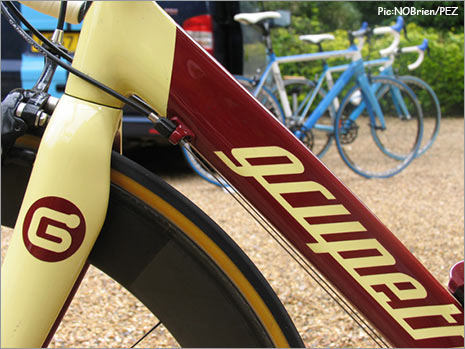 • Find out more about the Grupetto team visit GrupettoItalia.co.uk