It was a wet and wild affair in the women’s Road Race today but the big race favorite, Marianne Vos had no problems putting on a masterful performance to do what yesterday’s favorite, Cavendish simply couldn’t do. Win Gold!

In direct contrast to the sunny conditions experienced by the men yesterday, the women encountered a typically English wet day on their 140km race around London. Normally this could lead to a very dangerous race in a big peloton but with Olympic restrictions on numbers meaning that just 66 riders started the race, things were relatively calm in the small pack.

The small field stayed very compact for the first hour of racing before the Dutch team tried to break things up a bit with a few attacks but they were all short lived affairs. The Dutch tactics today were clearly to make the race as hard as possible for their team leader Marainne Vos to then try something on the two circuits of Box Hill but the peloton didn’t let any moves get clear for more than a few seconds. That didn’t stop the Dutch from keeping on trying though with Ellen Van Dijk being particularly aggressive.

With just 2 climbs of Box Hill to deal with compared to the 9 climbs of the men yesterday fans and commentators alike were hoping for fireworks from the women to light up the wet day. Before the climb though the only thing that seemed to be shaping the race were the punctures with the wet conditions on the narrow country roads leading to a rash of flat tires. The only big name to suffer an unfortunate flat at this stage was the Italian World Champion and one of the pre-race favorites, Bronzini who suffered a rear wheel flat which led to a very long chase to get back onto the peloton. Bronzini showed her experience though and used the slipstream of her team car to the absolute maximum to get back on which some of the women from the smaller nations with less experience clearly hadn’t mastered. These punctures and a few small ‘slip-out’ crashes to some minor riders thinned the field a little but the peloton was still all together when they hit the Box Hill climb for the first time. 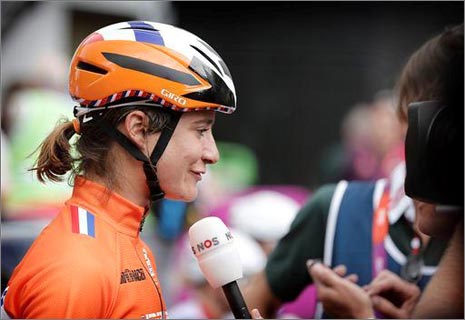 Vos was happy and calm talking to the media before the start today and even happier after the finish!

First Time Up Box Hill
The expected attacks on the climb didn’t quiet happen as Canada’s Clara Hughes set a strong pace with no one able to attack over her efforts, instead riders were slowly being shelled out the rear of the peloton. Finally just as the summit was in sight Marianne Vos showed her strength attacking hard and stringing out the peloton but she was unable to stay clear as the peloton leaped onto her.

It was then the turn of Great Britain’s Emma Pooley to have a go and her attack strung the field out even further with the peloton getting smaller as every kilometer ticked by. Pooley wasn’t given any leeway by the peloton though and as soon as she was caught Vos countered again but she too was unable to stay away.

Meanwhile back in the peloton, or more specifically off the back of the peloton was reigning Olympic Champion and another big favorite for today, Nicole Cooke (Great Britain) who was 20 seconds down on the now significantly reduced in size peloton. Fortunately for Cooke the peloton slowed down after the climb and ensuing descent and she was able to get back on but things didn’t look good for a medal today for the hometown favorite.

Second Time Up Box Hill
Despite repeated attacks from various nations, the peloton again hit the climb of Box Hill together although there were now just 38 riders left in contention for the medals. The climb itself was almost a direct repeat of the first time up as Clara Hughes set the pace until Marianne Vos attacked just before the top on the steepest part of the climb. Once again the attack was unsuccessful but the consistent attacking by Pooley and Vos were certainly wearing down the other riders in the peloton.

On the descent, Russian time triallist Olga Zabelinskaya attacked alone to be quickly joined by the USA’s Shelley Olds, Britain’s young sprinter Lizzy Armitstead and the most attacking rider and number 1 favorite Marianne Vos. With all four riders happy to contribute to the pace the gap quickly grew over the German and Italian led peloton with the lead at 30 seconds with 35km remaining. The Germans and Italians were determined to bring back Vos and co. though and their chase was having the desired effect on the time gap bringing them back to just 14 seconds but they couldn’t quite seem to finish off the job.

30kms To Go!
As the stress of the pace took its toll the leading break of 4 soon became 3 as Shelley Olds dropped away back to the peloton where she struggled to hold the wheels of the still German/Italian led peloton. Why was Olds struggling? Well apparently she suffered a heartbreaking puncture whilst in THE break of the race. A sad end to the break for Olds but the loss of Olds from the move did nothing to stop the Marianne Vos show. The Dutch superstar continued to drive the break at a phenomenal speed increasing the gap to the peloton back up to 30 seconds.

With 10 kilometers remaining, the Russian Zabelinskaya was suffering in the break and not doing much work but despite this the gap continued to rise as Vos and Armitstead were working superbly together. The USA and Sweden came up to help Germany with the chase in the peloton after Italy’s efforts petered out but to no avail – the medals were now to be fought out by the three riders in the break.

With two good sprinters in the break Zabelinskava knew that she would have to get away if she stood a chance of winning and she tried one or two small attacks but the Vos/Armitstead pairing were simply too strong and it was obvious to one and all that the sprint would come down to these two. The Russian duly led these two out and Vos started the sprint with 200m to go but despite her best efforts the British rider couldn’t come around and Vos claimed the second Olympic Gold medal of her career after her gold medal from the points race in 2008. Vos was certainly a deserving winner after being the most aggressive rider in the race and also being arguably the strongest women in the peloton today and for the last several years. 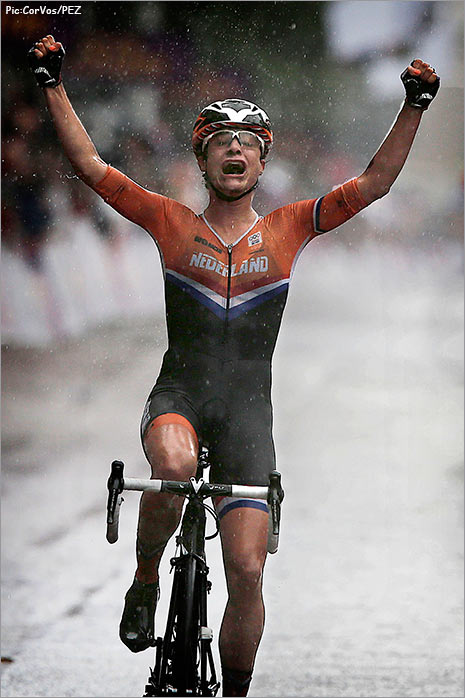 Leading the dejected bunch home just 27seconds later was Germany’s Ina Teutenberg who was left to ponder what could have been as her team were unable to pull back the leading trio despite their best efforts.

All in all it was a great attacking race by the ladies and a worthy show of women’s cycling, despite the terrible weather and the restrictive Olympic rules that led to such a small peloton contesting the race. Small peloton or not, the best lady on the day won though and Great Britain must be happy with their medal result also after the big disappointment from the men in yesterday’s race.

Keep it tuned to Pez during the week as we bring you all the action from the time trials! Can Wiggo make up for the British disappointment yesterday? Or will we have another surprise winner?