The 101st Berlin Six Day Race: The race was first held in 1909 when Americans Floyd McFarlane and Jimmy Moran won a US promoted event. Despite the race not being run during the war years this is the most prolific of all the six days – in 1926 there were three six days held in the city and as recently as 1970 there were two races held. Let’s take a closer look!

‘Recordman’ is Klaus Bugdahl with nine wins, Patrick Sercu and Peter Post have seven each, Dietrich Thurau and Sigi Renz have six and Danny Clark and Walter Ruett five.

‘Recordman’ for starts is again Bugdahl with an amazing 26 starts in the race, but he rode in the era of more than one race per year.

The German figures third in the list of highest number of six day races ridden on 228 to Danny Clark’s 236 and Rene Pijnen’s 233. 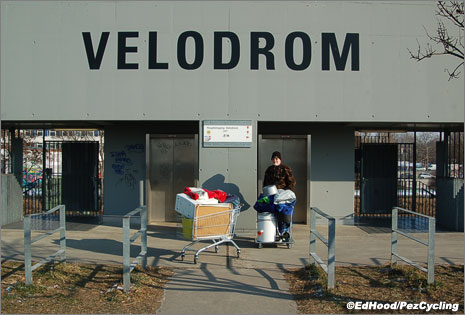 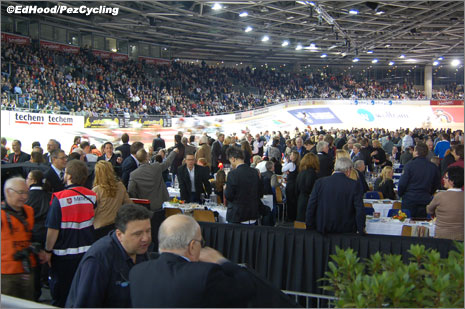 The crowds come out in force to Berlin.

With the demise of Munich, this is the biggest of all the six days – bucking the trend of six days fading away, Berlin pulls in the crowds.

But it’s not just the six day racing which lures in the paying public -sprinters and stayers figure every night. 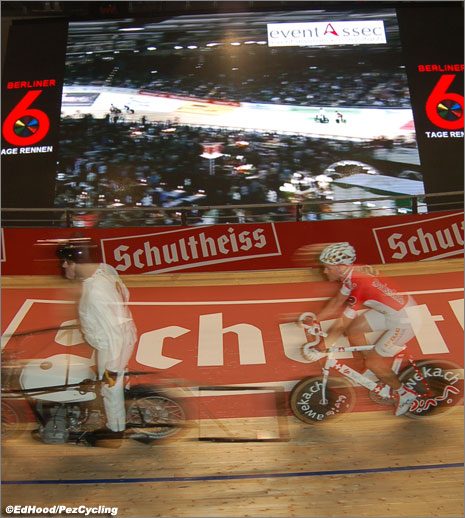 The curious world of stayer racing is hugely popular in Berlin.

Germany, like France has always had a great tradition of sprinters, their team sprinters broke the GB team’s Beijing world record in the World Cup at Cali recently and will be pulling on rainbow jerseys for the discipline at the London World Cup following Gregory Bauge’s ‘bit of bad luck’ with whereabouts which caused him to lose his individual and team sprint titles. 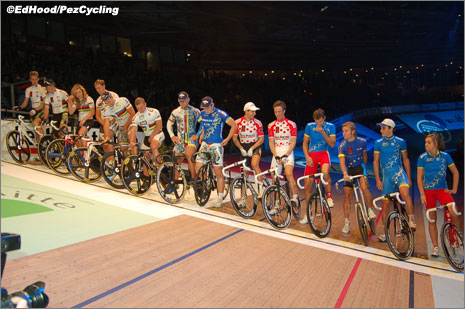 The fast men – the sprinters.

To those who know Bauge his indiscretions aren’t a surprise, he’s a ‘party animal’ – a year or two ago he was riding the sprint tournament at Rotterdam.

Saturday night was full gas partying for Gregory and he slept late, arriving at the stadium as the afternoon turned to evening at the Ahoy Stadium.

The only problem was that there’s no Sunday night racing in Rotterdam, it’s an afternoon session and Gregory arrived just as everyone was leaving the stadium. 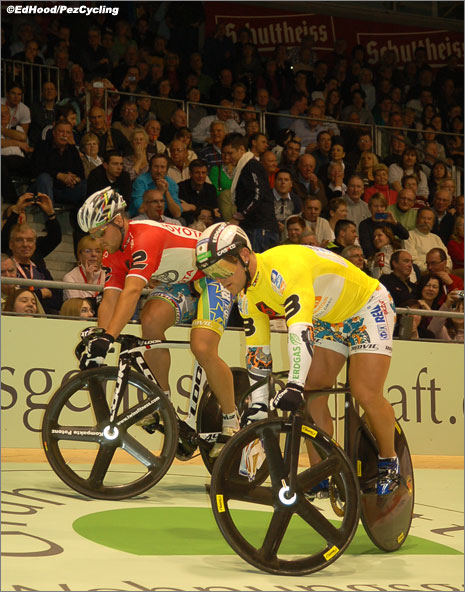 The sprinters get a lot of attention in Berlin.

There’s no World title for stayers anymore but 2011 European champion Patrick Kos rides, paced by dad, Patrick who was a six day and stayer rider back in the 70’s. 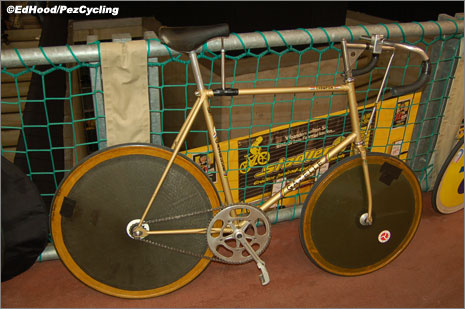 The unique look of a stayer bike.

And the big news from day one ? – not the chases, that’s for sure.

Peter Schep is out with a broken collar bone – a bad change in the 1,000 metres time trial and bang ! all that good form gone to waste. 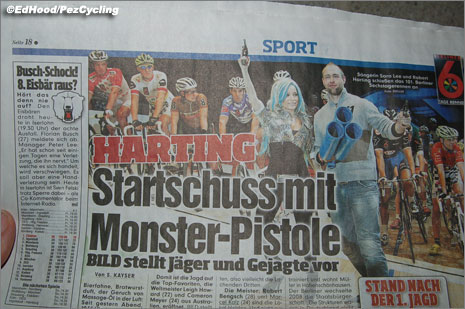 Day 2:
Top of the bill in the six day field are Australian world madison champions, Leigh Howard and Cameron Meyer. 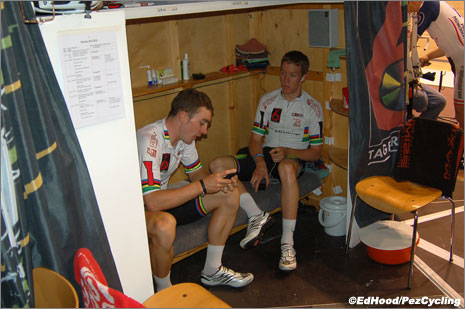 This will be only their second six day; their first was here last year when they finished second behind Robert Bartko & Roger Kluge.

Kluge rides again, this time with Leif Lampater; Big Rodge has had a little ‘whereabouts’ hassle but it seems that we don’t need to discuss because it’s ‘all sorted out.’ 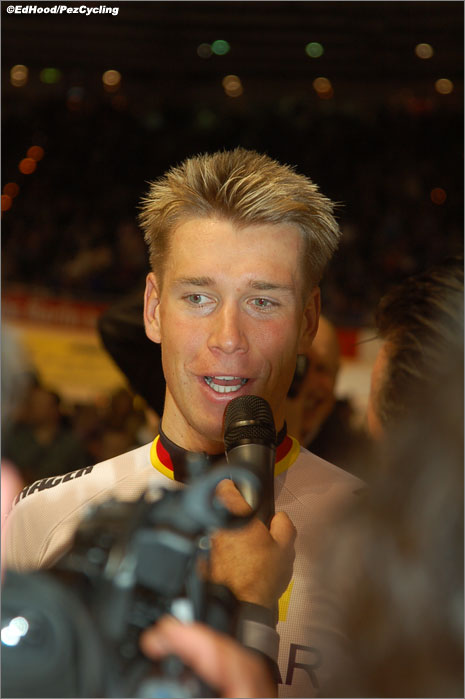 Tell that to Rasmussen and Bauge.

Our boy Franco Marvulli rides with young compatriot Silvan Dillier – both are in our cabin.

Franco’s morale is good, second at Bremen and Rotterdam, he won in Zurich. 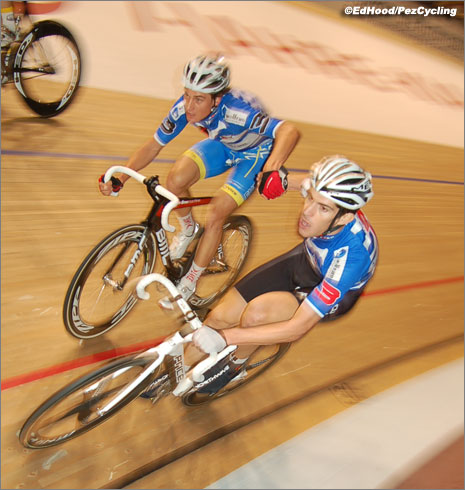 Until last night that is, when the fouled a change in kilometre time trial late in the night and Schep came down hard.

Danny is like a man serving a jail sentence, crossing off the days, on by one. 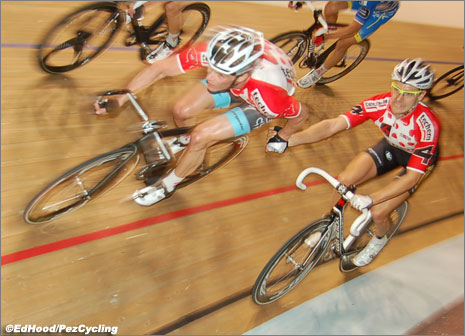 He didn’t take a soigneur to Grenoble, nor does he have one here – that tells its own story about his commitment to the race.

But on the other hand, big German engines Robert Bengsch and Marcel Kalz look dangerous. 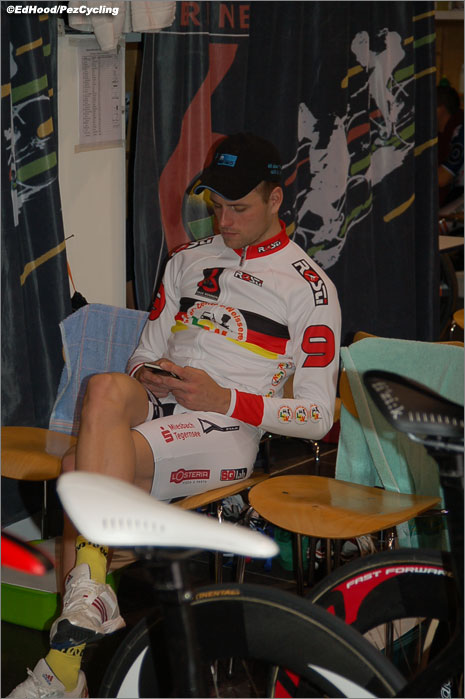 Robert Bengsch looks relatively harmless while contacting the outside world.

And mention of Mr. Bartko brings us to the topic of the day; again it’s not the chases, they ain’t the best.

D Marks/Euros/cash/money the love of which is the root of all evil, the Good Book tells us.

The organisers chopped everyone’s contract – the scuttlebutt is that they wanted to take 30% from Bartko’s fee. 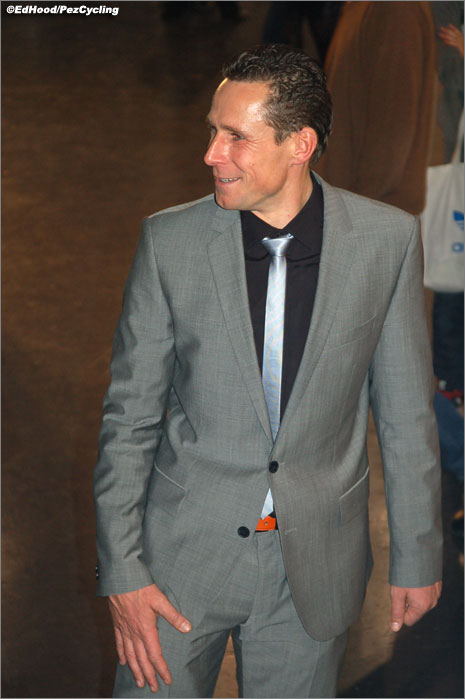 Not content with Berlin’s proposed payment, Big Bob Bartko chose to watch this one from the stands.

Bartko didn’t buy into that and doesn’t ride; but to add insult to injury, the Aussies are on the same sum as last year – well into five figures.

The organisers say that ‘times are hard’ and that many of the tickets ‘freebees’ but when you look at the sheer mass of people and the amount of food and drink that’s consumed, it’s hard believe that this is a shaky race.

Day 3:
The programme bills this as the ‘Goldene Nacht.’

The presentations take an age in Berlin; world and European champions are lined up, introduced and given flowers. 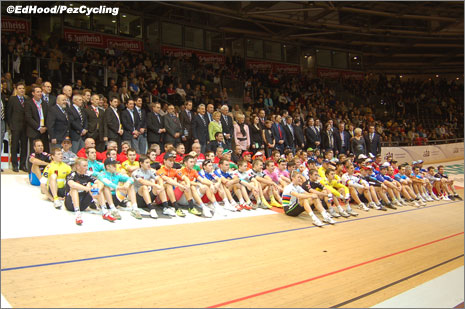 Then there’s the rolling presentation for the teams.

First race for the six day guys is a sprint series – just to loosen the legs.

Then sprinters: flying laps, keirin and match sprints take place during the evening; the crowd noise for every rider’s effort is at pain threshold level –to the extent that we didn’t pick up that Forstemann (and his thighs) had broken the track record with a 12.7.

For the first few nights there were ladies races, but we didn’t see much of them– sorry girls. 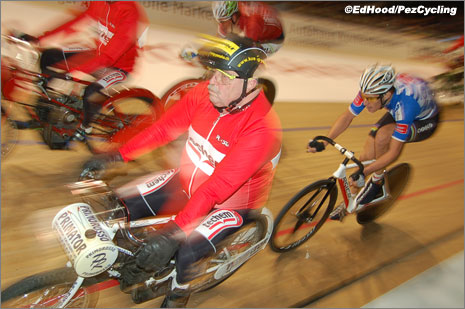 Dernys: two each night, an early one for the ‘big’ teams and a very late one for the ‘little’ teams – including our Americans.

Yes, Brad Huff and Jackie Simes are riding together here in Berlin – and doing no worse than at least half of the field. 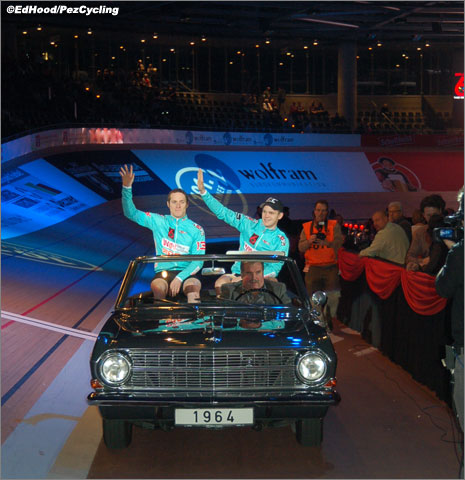 Jackie and Brad’s introduction was a lot more fun than gulping derny exhaust.

Despite six or seven years of running at the sixes I still can’t quite figure what goes on inside the Derny drivers’ heads.

Like Brad says; ‘they take you to the front, rip the legs off you and then ease you out of the back!’ 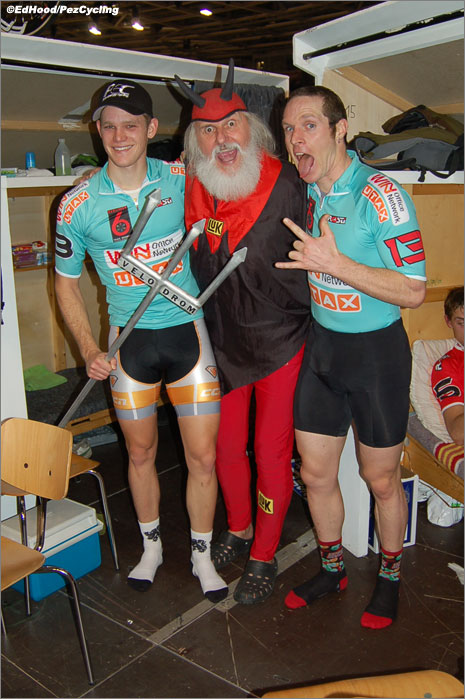 Brad and Jackie with Didi!

The crowd love their stayers; 80 laps of noise –but it seems more like 180 because the motor bikes have to sort themselves out into the correct line astern before closing the throttles and coasting to allow the riders to get tucked in on the rollers before the mayhem starts.

Topic of the day – bears. 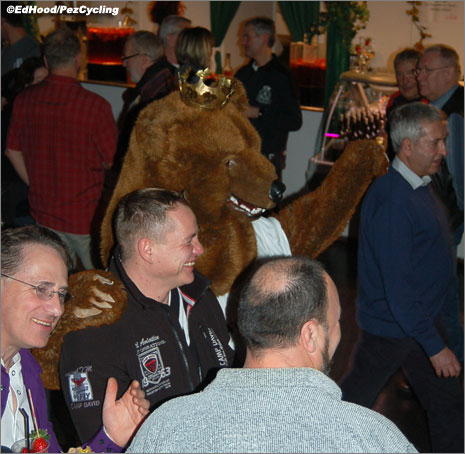 They’re the city’s symbol, having done my homework, it appears that the back in Medieval times the locals liked to be able to chant the name of their city’s symbol – ‘bear’ in German is ‘Bar’ hence‘bar-lin.’ 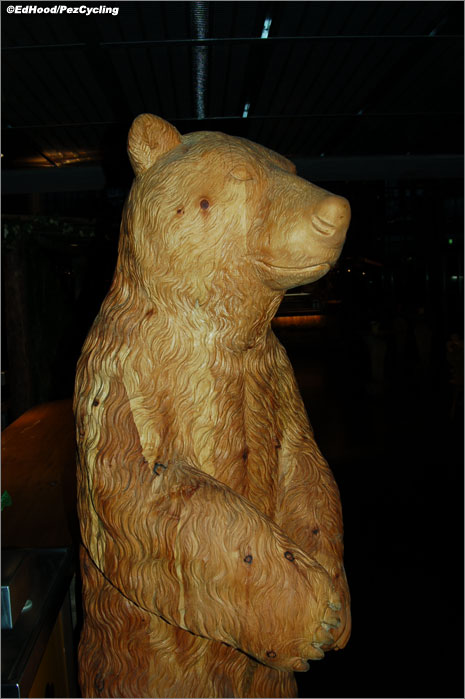 I had hoped for something more interesting – I’ll try harder tomorrow.

Tomorrow – the finale!
Like PEZ? Why not subscribe to our weekly newsletter to receive updates and reminders on what's cool in road cycling?

PEZ In The Trenches: The Finale In Berlin