PEZ In The Trenches: The Finale In Berlin

Yesterday, you got a taste of the first half of racing in Berlin – today, we take the race to its conclusion. As always, Ed Hood is on the scene working hard, but his camera and pen are never far away. Let’s see how the last three days looked through Ed’s eyes.

You don’t get enough time in bed; the riders can’t be bothered; the soigneurs sit around and chat, not even bothering to watch the chases – you get the picture. 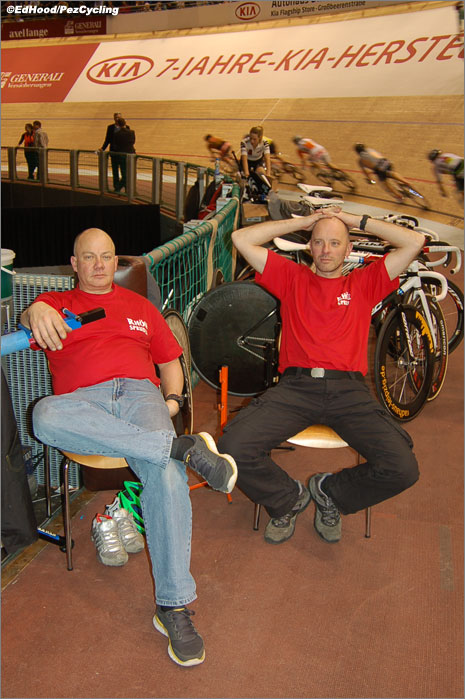 They’ve seen it all.

But still the Berliners flock in, the odd cheer for the processional chases but roof-raisiing roars for the stayers and sprinters.

And the German newspaper topic of the day is, Didi Thurau, the fallen star of German cycling. 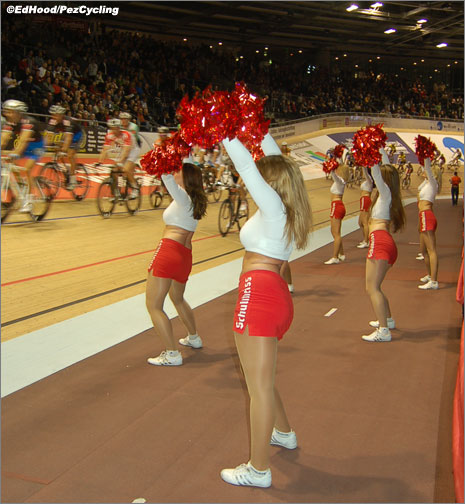 The racing might not be terribly enthusiastic, but the cheerleaders do their best to make up for it.

The man was a world team pursuit champion in his teens, a Classic winner, Tour yellow jersey holder and big name in the sixes.

And now – he’s just been through the courts in Switzerland for ripping off his paraplegic father’s insurance money. 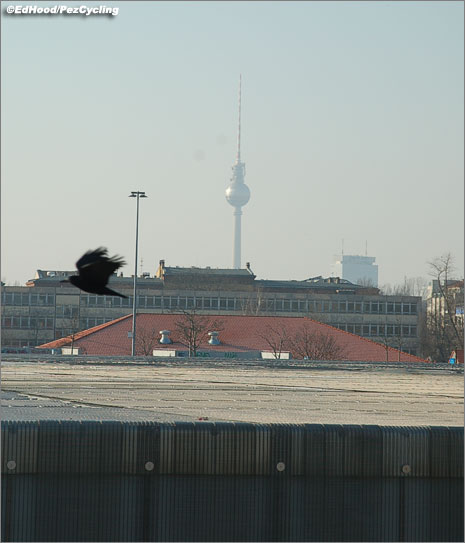 Nothing like the Berlin skyline in the gray of winter.

And to think, he used to arrive at the sixes in his Ferrari Testa Rossa.

Day 5:
Let’s talk bikes for a minute, there’s some trick kit on display, here in Berlin.

Cam Meyer rides the very latest Bike Technologies Stealth – gone is the curved ‘Corima-esque’ top tube, replaced by a level and flat topped number with much more attention paid to the aerodynamics around the seat cluster, including a neat aero seat pillar. 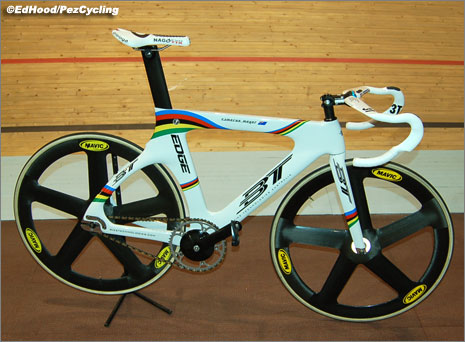 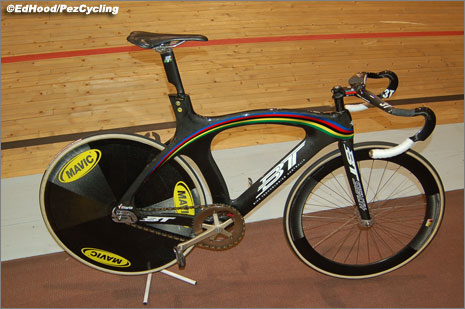 The head and fork crown arrangement change too giving a smoother line – and white is the ‘new black.’ 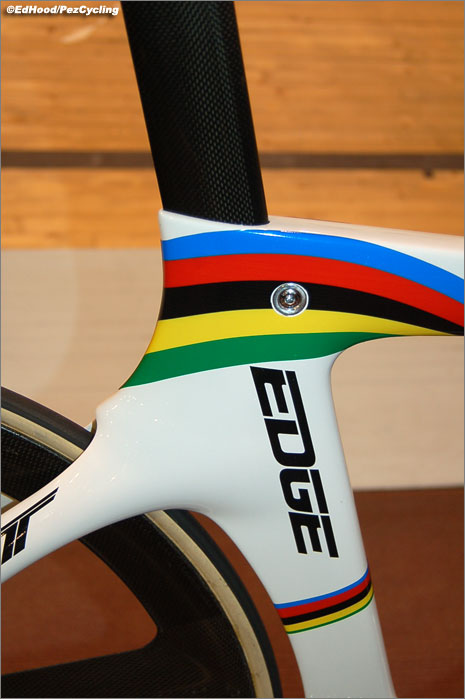 The rear triangle stays the same, including the industrial rear ends.

There’s a new BT crankset to handle those 52 rings– 53 if you’re Jack Bobridge – with a solid carbon spider. 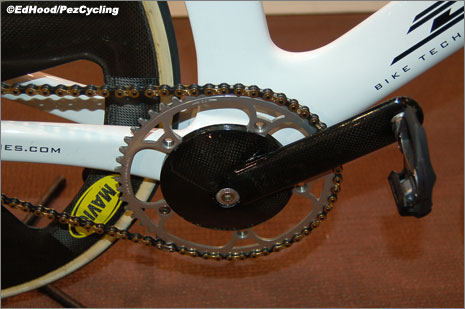 The bikes have been developed for the team pursuiter but will be ridden by the sprint athletes, too.

Mavic five spokes carry the Vittoria rubber but on the subject of wheels there’s a little revolution taking place. 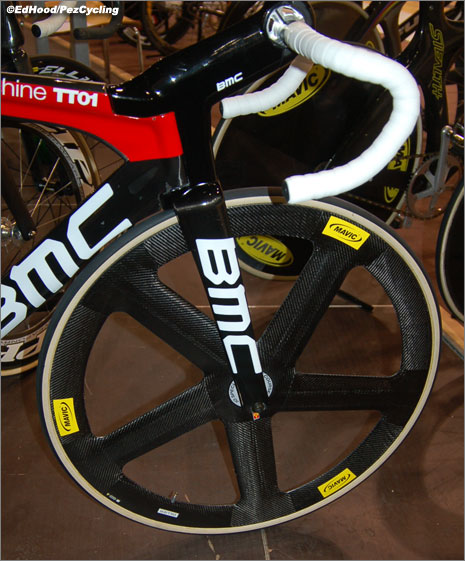 Previously, the trend was for rim as narrow as possible, but HED started the trend for the rims to be marginally wider than the tyres to give better airflow – and Zipp have followed suit on their latest hoops. 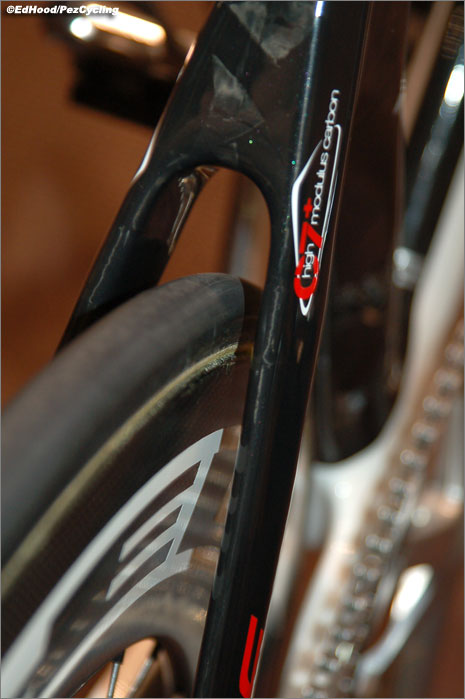 There are also new aero ideas on Roger Kluge’s machine, moving away from the trend for ultra narrow fork crowns, the designers at Felt have opened up the crown around the tyre, allowing the air to flow freely through and onto the down tube. 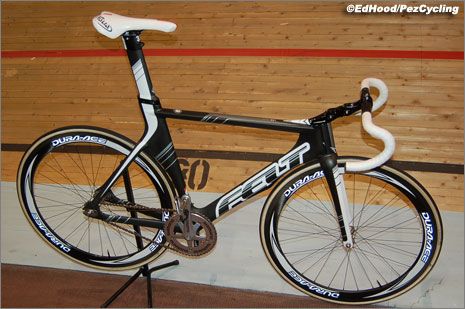 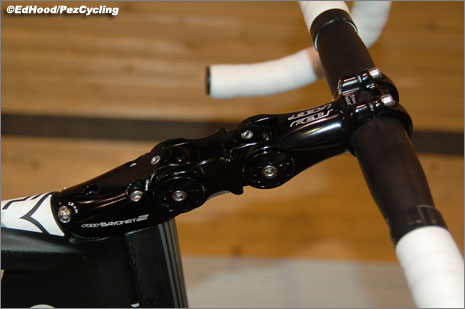 Perhaps the most futuristic machines on display are the BMC Time Machines ridden by Alex Aeschbach and Silvan Dillier; complete with ‘shark fin’ integral head/extension and adjustment by way of an eccentric clamp – love them or hate them, they’re different. 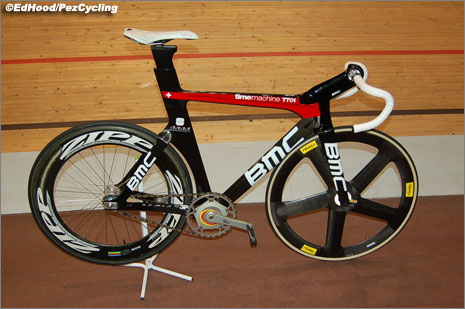 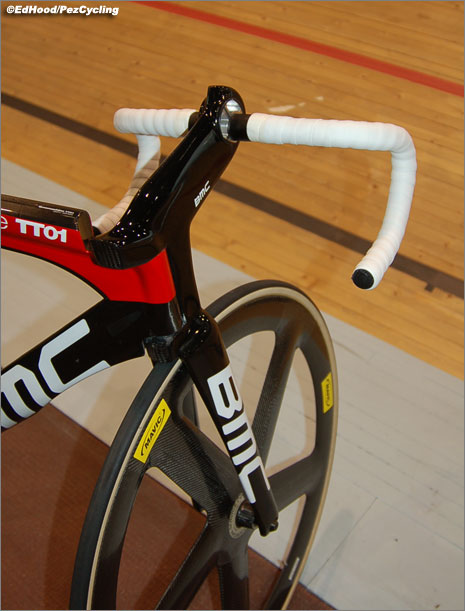 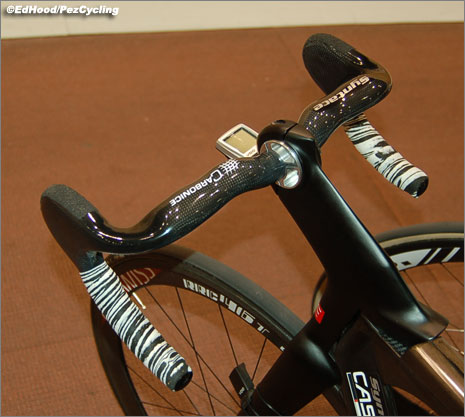 Alex tops his off with the new Syntace carbon bars to give the bike a real ‘Star Wars’ look.

For the big men – the sprinters – Hamburg manufacturers Stevens have produced a nice looking machine, The Arena which Stefan Nimke rides, complete with 3T aero bars. 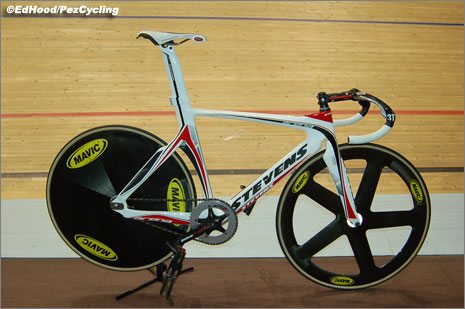 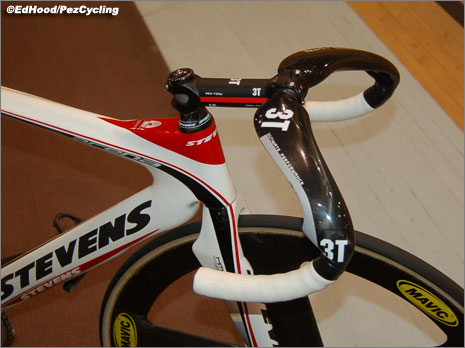 On the race front, sometimes Monday is the big sort out in the chase, alas not this Monday.

But we did get the German Olympic team introduced to us, notably their team sprinters Levy, Nimke and Enders who broke the world record for the event with 42.914 (previous record GB Beijing 2008 42.950)for the three lap event in Cali at the end of last year.

To endorse the nation’s strength in this discipline the team which finished second, riding in Erdgas colours was the German B team of Forstemann, Botticher and Eilers.

Six day participant Roger Kluge is on the squad too – for the omnium, he won the World Cup round in Astana in the discipline, dispatching the likes of Italian Elia Viviani and GB’s former world champion, Ed Clancy to win. 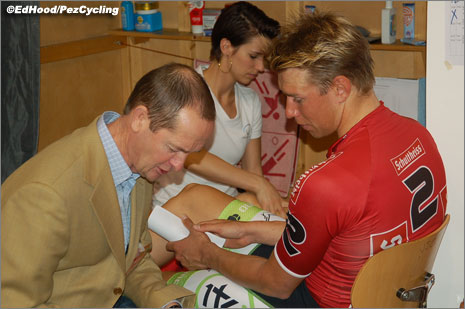 Topic of the day is thighs, who has the biggest on the German sprint team?

Is it Forstemann, or is it Enders? – the latter was a body builder, so maybe he has the edge? 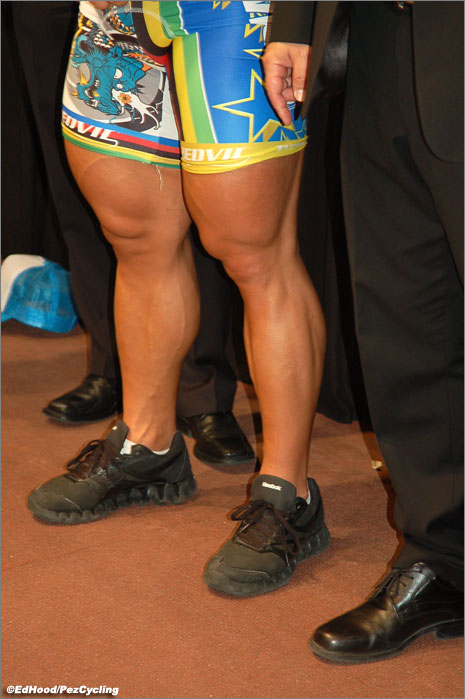 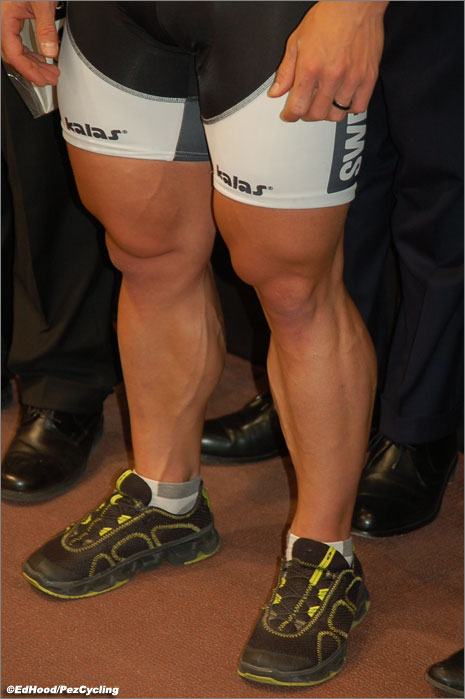 Day 6:
I’m sorry if I haven’t ‘gone large’ on the chases, they just haven’t stirred me – maybe I’ve become too used to them, maybe they look better from the stand? 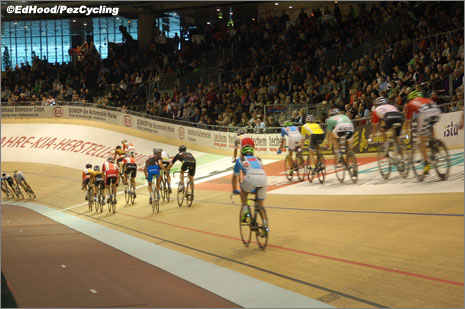 Whatever it is, I haven’t had the motivation to write much about them, the final chase was no different.

I had the feeling all the way through that the Australians would win – to honour the rainbow jersey (and contract fees). 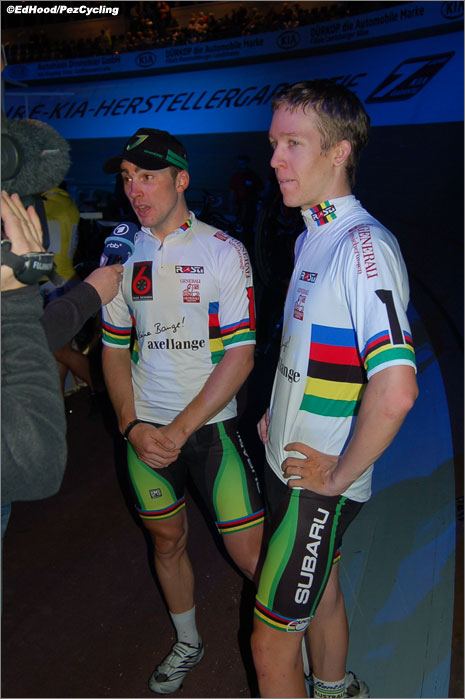 No one has taken it upon himself to the ‘Capo’ on the scene like a Risi or a Martinello or a Sercu – and that shows.

On the subject of Martinello, he came to visit the race tonight – still looking fit and happy. 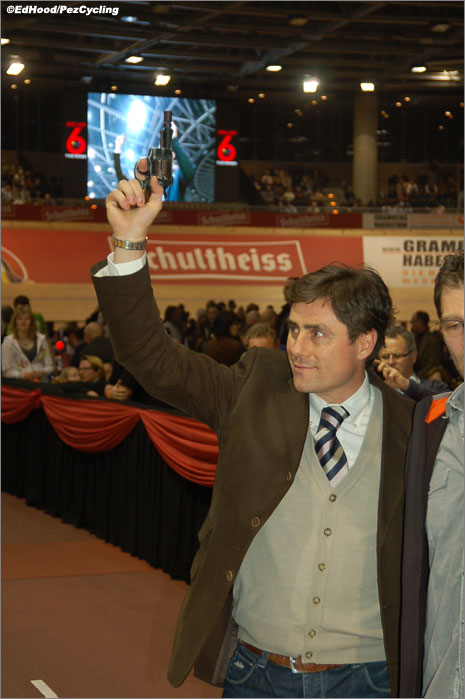 Danny Stam still looks fit and there are flashes of the ‘old Danny’ in there, but he’s not happy any longer.

The organisers had to practically haul him to a stop to get him to accept his ‘farewell’ trophy – it’s plain to see that he’s embarrassed by all the fuss, just wants to get through Copenhagen and move on. 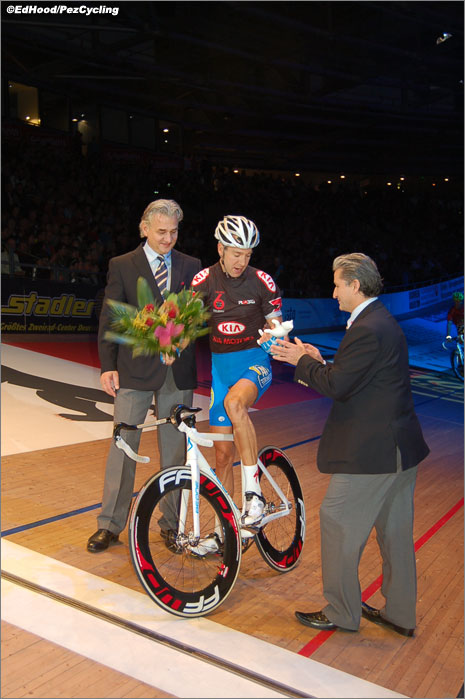 The dreaded ‘one season too many,’ for sure.

And topic of the day – Big Bob, he turned up, looking dapper; I never thought I’d say it, but we missed him. 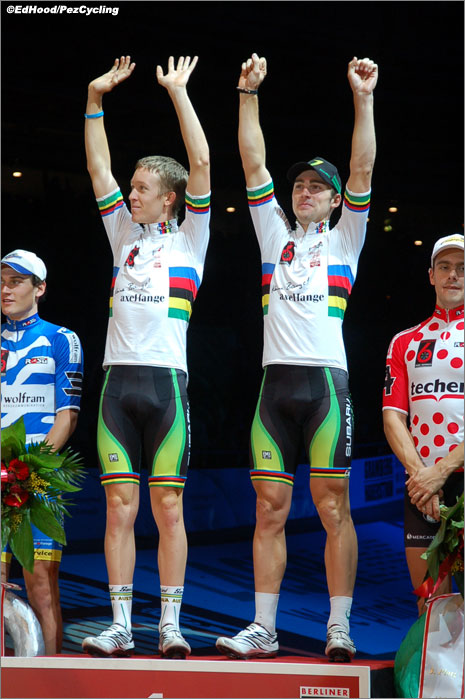 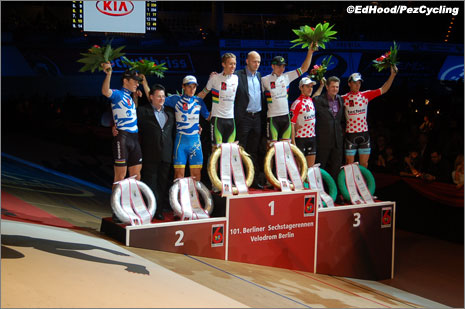 Not in an ‘Iljo at Gent’ kind of way but his presence on the track would have done no harm.

Next up is the Copenhagen six day – we work for defending champions Michael Morkov and Alex Rasmussen.

I won’t be moaning about the chases there, I’m thinking.