PEZ Inside The Zurich Six!

From deep inside the trenches at the Zurich six Ed Hood brings us all the action from the first night of the race that almost wasn’t……where’s the track?

The first thing you need to have a track race – is a track. 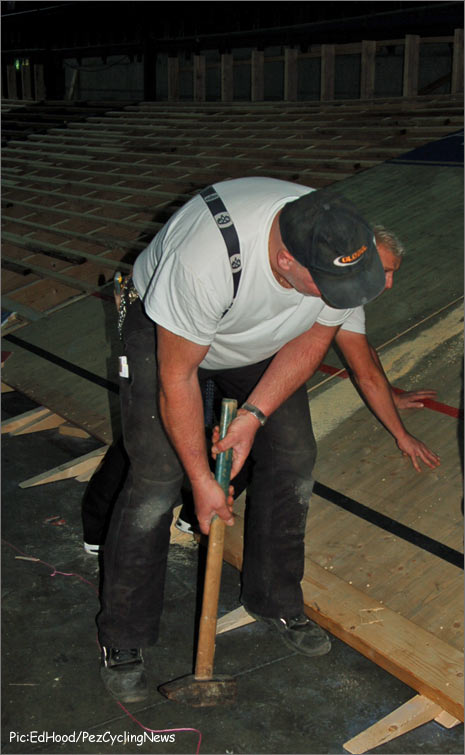 It’s damned inconvenient if the race is in Zurich but one of the bankings is still in Germany. That was how it was on Tuesday – just like last year, I looked around the hall and thought; ‘no way!’ 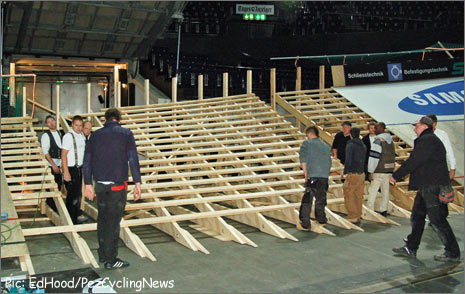 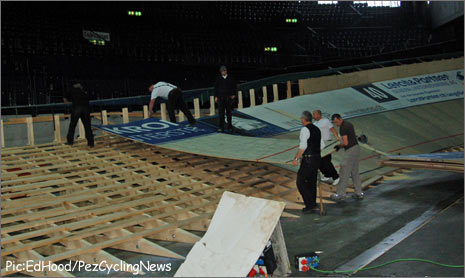 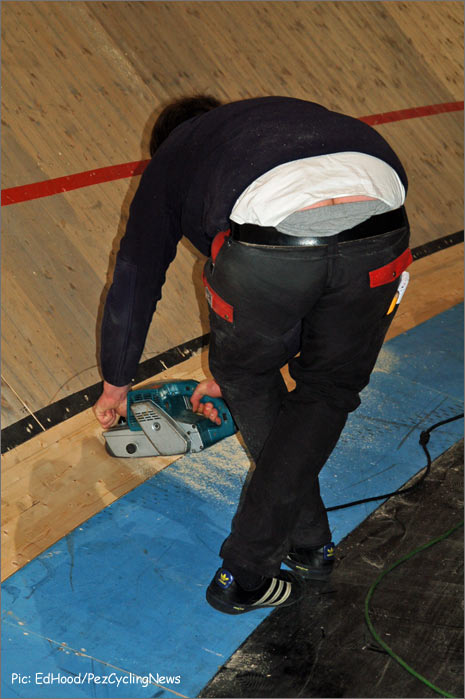 But the container arrived, the foreman joiner turned into a slave master and by start time you’d never realise the panic there had been just hours before. 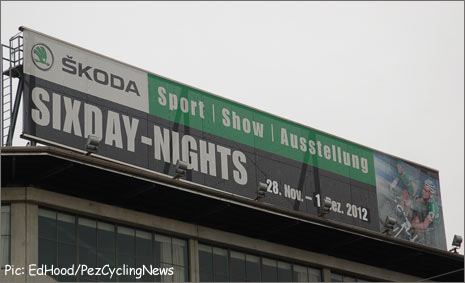 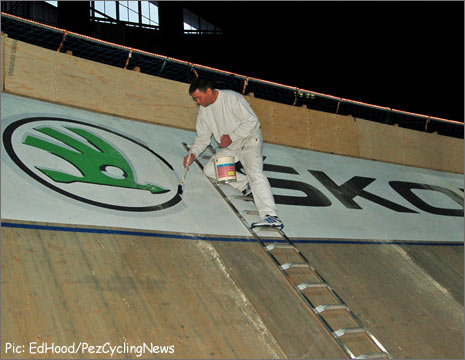 Except for the fact that there’s more dust here than in a coal mine and the banking rattles like there’s an earthquake aftershock taking place. 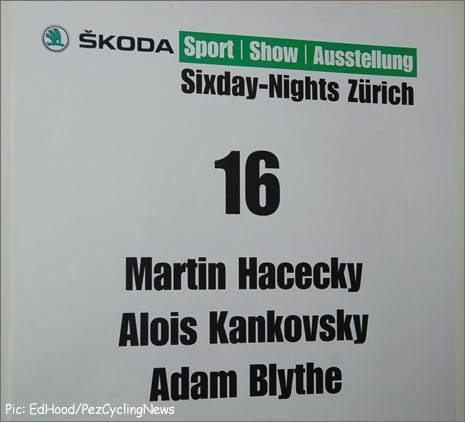 We have three riders, Martin Hacecky and Alois Kankovsky from the Czech Republic plus British roadman sprinter, Adam Blythe. 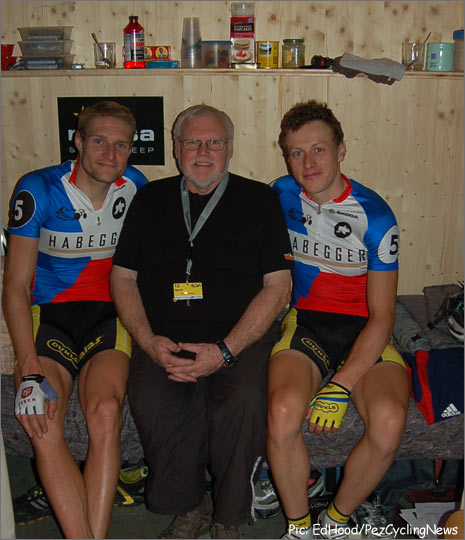 Martin has been Czech national champion on the track, won UiV cup races (U23 six days) and this year had four big road wins in Czechoslovakia. Alois was world omnium champion in 2007 and has many European and World Cup podiums, not to mention strong road palmares – this year he’s won a stage in the Tour of Azerbaijan, two stages in the Chinese Tours of Taihu and one stage in the Tour of Fuzhoi. 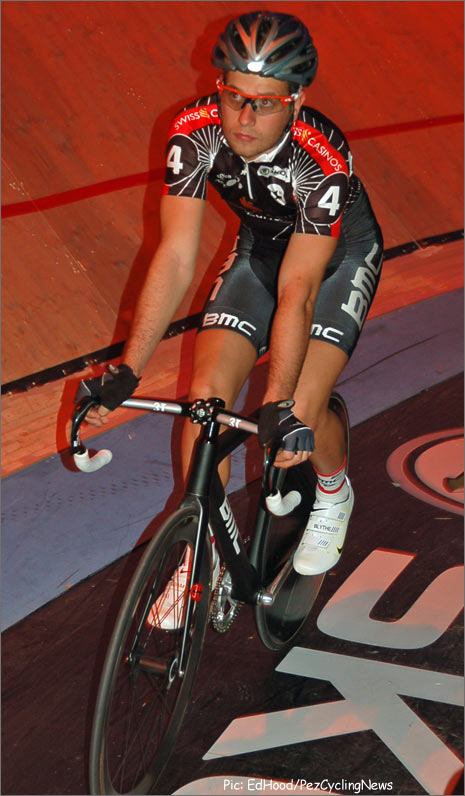 Adam is a big finisher with BMC; this year he’s won a stage in Paris-Correze and the Frank Vandenbroucke Memorial, Binche-Tournai-Binche. 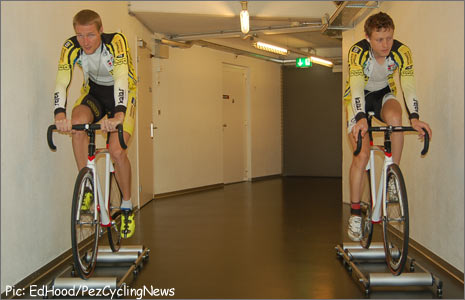 The Czechs drove from Prague on the day of the race – 700 kilometres, so they needed that half hour on the rollers. 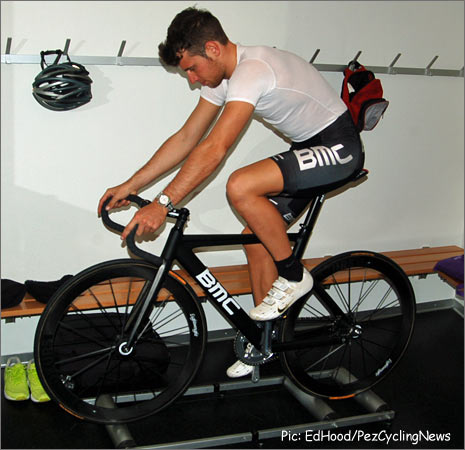 Adam needed rollers too – this is his first track race in an age and he was looking for some of that leg speed stuff.
With BMC being a Suisse team, they wanted a presence in the race.

The organisers eased the boys into it – with a 100 lap madison. And the first race saw the first crash; never a good portent. 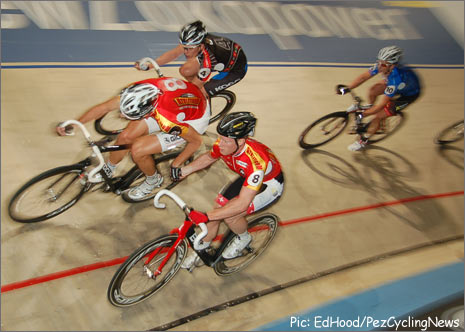 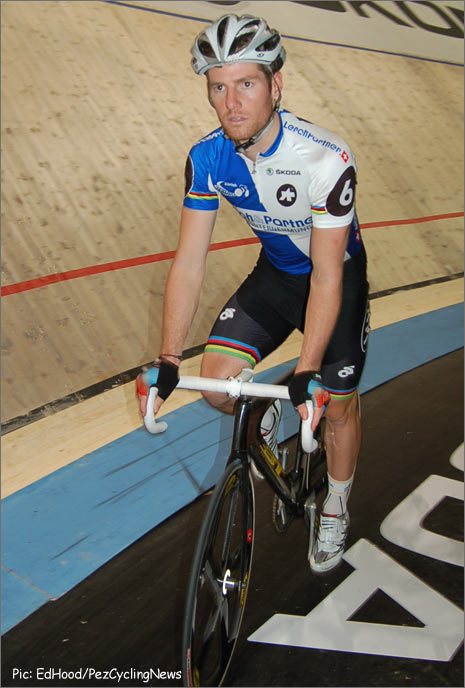 But it was a good start for home boy Silvan Dillier paired with Gent winner, Glenn O’Shea – they took the flowers and the overall lead. Next up was the 100 lap ‘steherrennen’ – that’s motor paced to you and me. 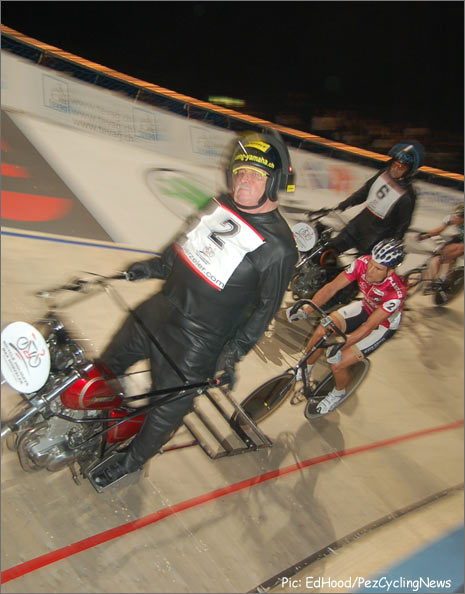 The crowds love the big motors in Zurich, but as Viktor said – having watched the race on the internet live feed – ‘some of those guys look as old as the motor bikes they’re following!’ 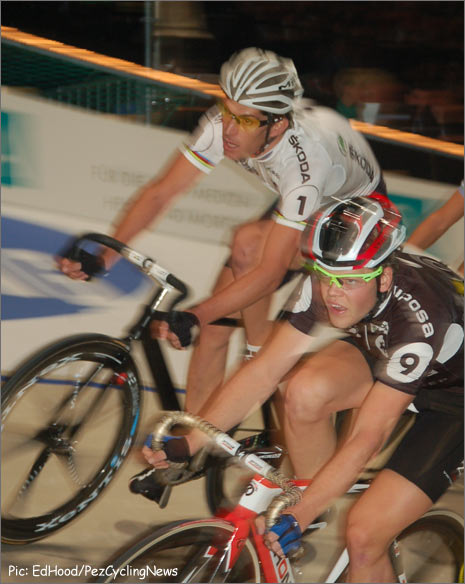 Franco Marvulli lives just minutes from the track and is a firm favourite with the crowd; he’s again paired with up and coming fellow Suisse, ‘Rocket Man’ Tristan Marguet.
At Gent they dominated the time trials – flying lap and 500 metres.

The first time trial at Zurich was the 1000 metres flying start time trial. Dillier and O’Shea posted a 56 second ride – albeit I don’t think the track is a true 200 metres, each year they have to trim and adjust the boards to get the track to fit the hall – placing the presh firmly on ‘Marvellous’ and the ‘Rocket.’ 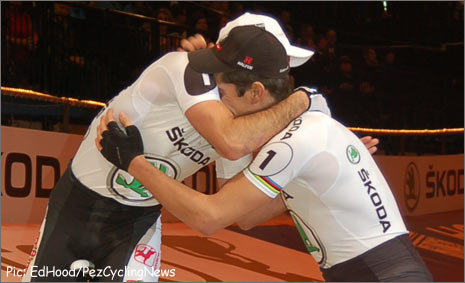 The Swiss left us in no doubt who the quickest men on the boards are – 54 seconds; and even if the track isn’t 200 metres, two seconds is a yawning margin to win a time trial by at this level.

Sprint series – I must have missed that one! Unfortunately for me, Vik caught the band – Simu & Simu – telling me that in all his years he’d never heard anyone worse. 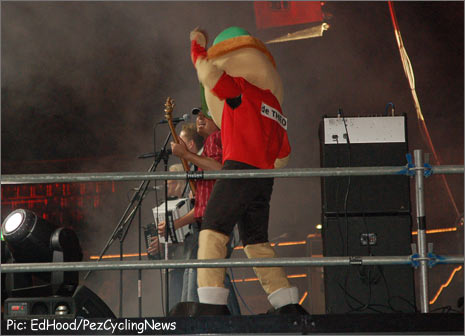 I’ll refrain from comment, but would observe that if I was a serious musician I might be tempted to hurl Theo – the manic race mascot – off the stage. 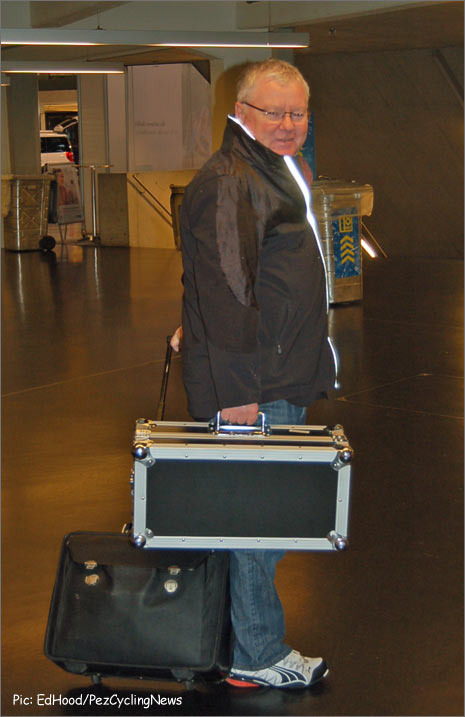 The big chase was pretty savage at times – and the good news on the music front is that ‘Mr. Music’ – Pete Traynor – is here and the sounds were good – ‘Keep on Running,’ ‘La Bamba’ and to spin ‘Summer of 69’ with 69 laps to go was genius (I think?) 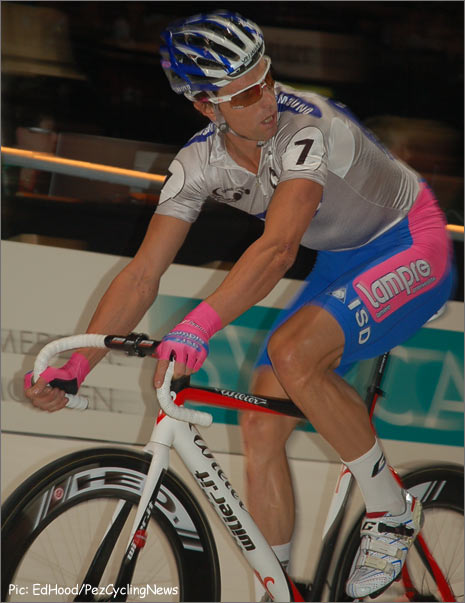 The crowd wasn’t the biggest, but nor was it disastrous. 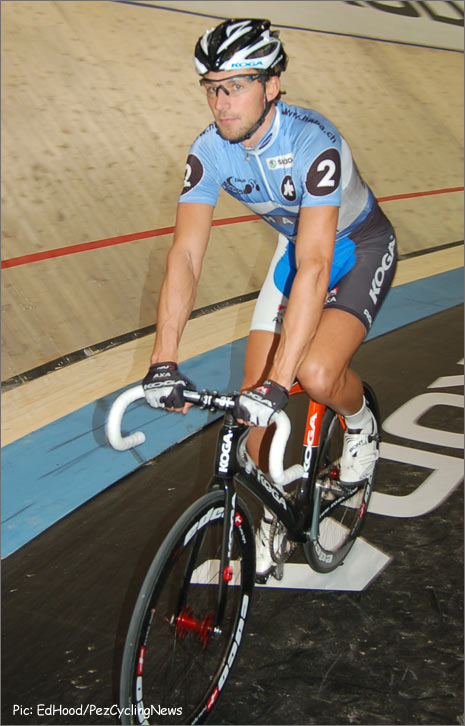 Peter Schep is the smoothest man on the boards and his hand slings are BIG. 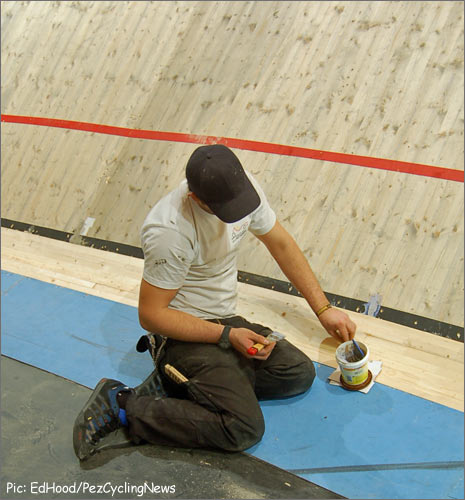 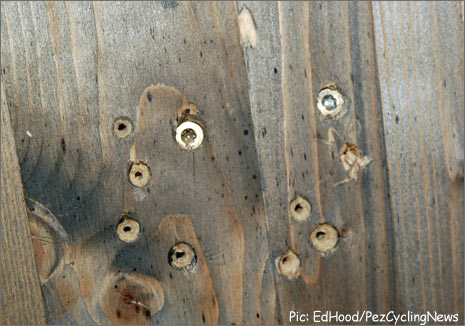 They’re two of the most experienced men on the boards and have come down at exactly the same spot as the guys crashed in the first chase – that banking isn’t the best. 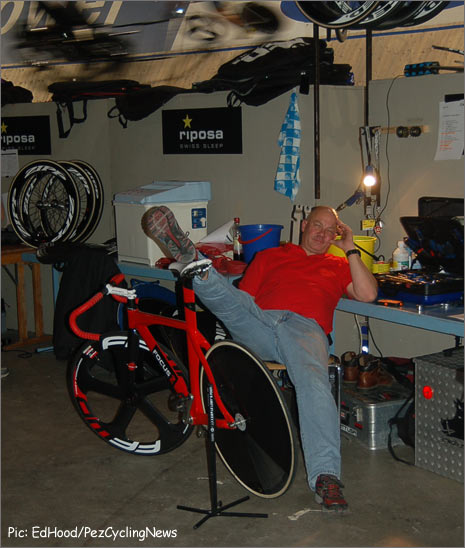 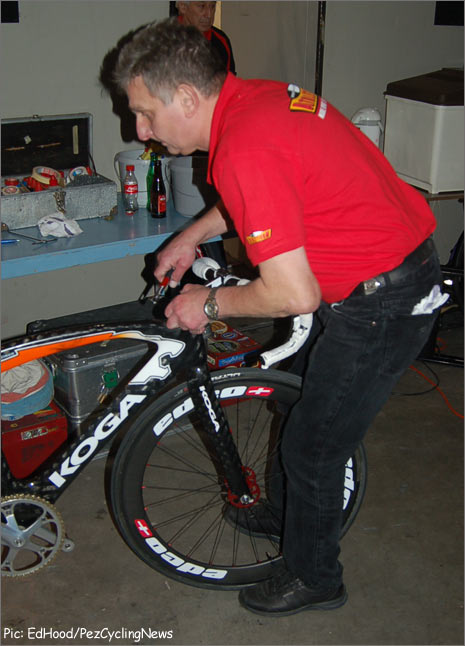 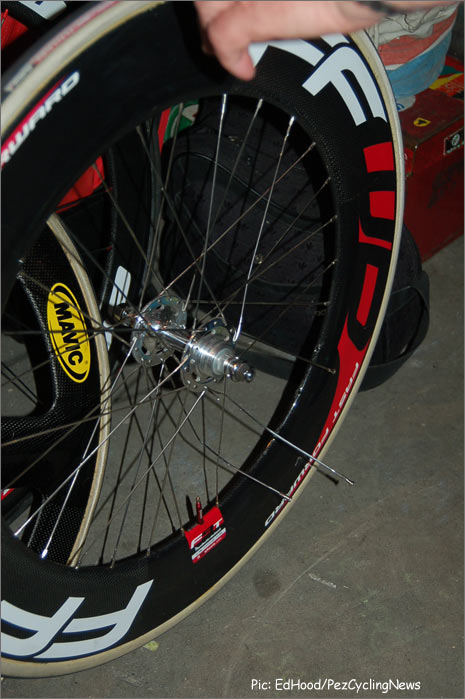 The mechanics spring to life and work hard to get the bikes back together but both riders are neutralised – there are wounds to dress. 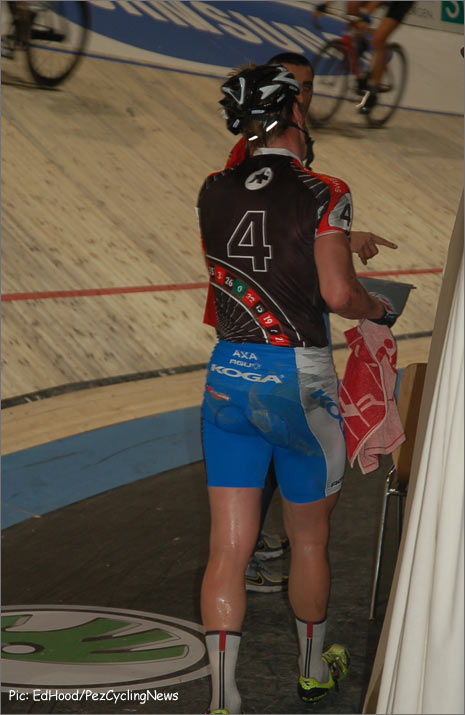 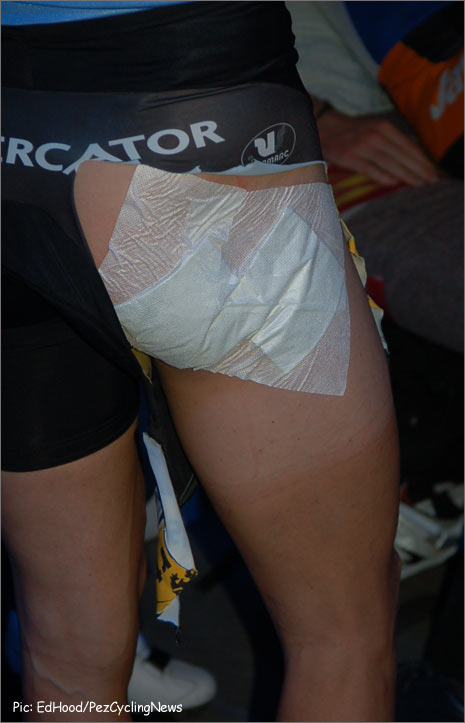 ‘Mambo Number Five’ blasts as Leif Lampater and Christian Grasmann take the gun. Derny – strange how the home boys always win? Simu & Simu do an AC/DC tribute, best not talk about it. 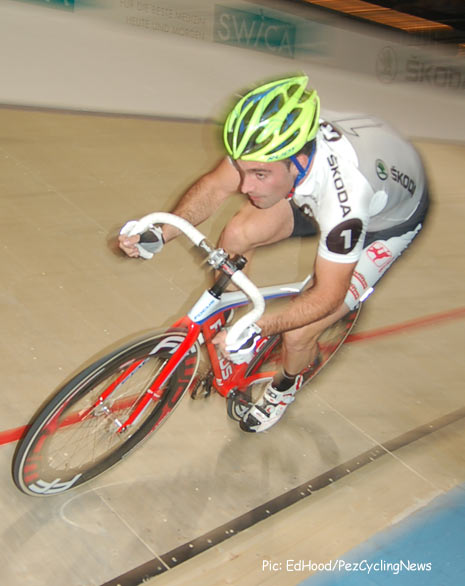 And then the flying lap – ‘Marvellous’ and the ‘Rocket’ go Jason Kenny fast to win in 10.00. (I must bring my measuring tape down to the track, tomorrow.)

The sprints series is binned because the programme is running late – Martin and Alois are out of the cabin like Usain Bolt and Yohan Blake. Adam has the Derny – and we’re done, just on midnight.

One down, three to go – ‘Kris how about one of them Pilsner Urquells the boys brought us from Prague . . .

Zurich Six Night 2: In The Trenches!