Preview: It’s Paris Nice time! Time for the General Classification riders to really test themselves in the 2nd World Tour event of the year and time for our own Chris Selden to test himself on Stage 1’s time trial circuit in the cold but beautiful Parisian countryside. 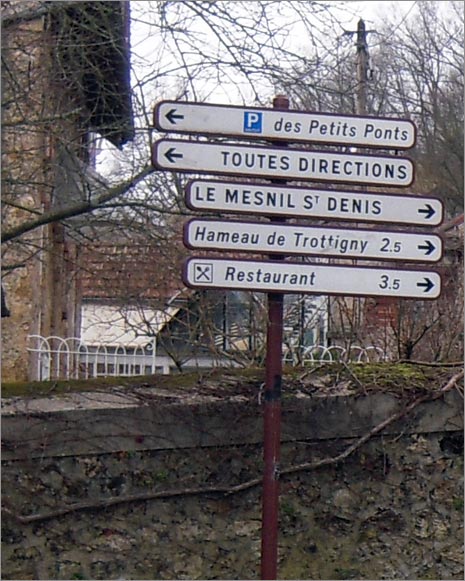 As an overweight ex-cyclist, living on a mattress on the floor in my mother-in-law’s house in the winter time in Paris you could be forgiven for thinking that things aren’t going great for this particular PEZ writer. Fortunately things aren’t as bad as they seem on paper as my mother-in-law just happens to be a good cook, a great host and lives near the best riding region in the whole Parisian region! Even better, this region just happens to be hosting the start of this weekend’s Paris-Nice, so I had no excuses not to go and check out the 1st stage’s circuit. 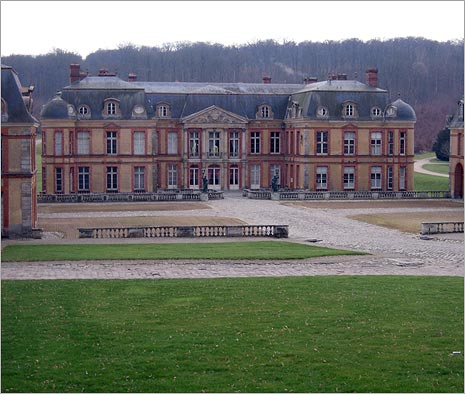 Chris’ temporary abode at his mother in law’s house……no, not quite – in fact it’s the chateau at the beautiful start village of Dampierre en Yvelines.

Yes, the famous Race To The Sun as it is known typically starts in cold conditions in the outer suburbs of Paris before winding its way down through the beautiful French countryside and across some tough mountain passes to arrive in the sunny south 7 days later. 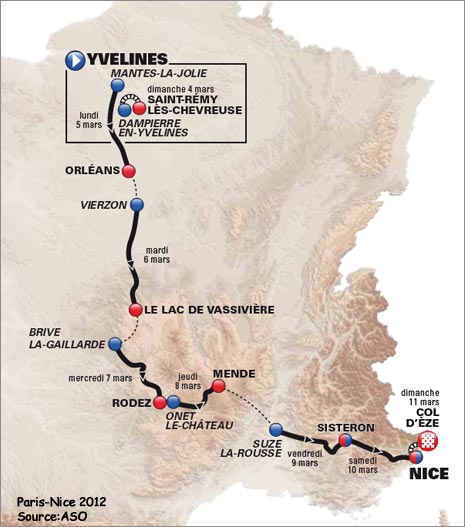 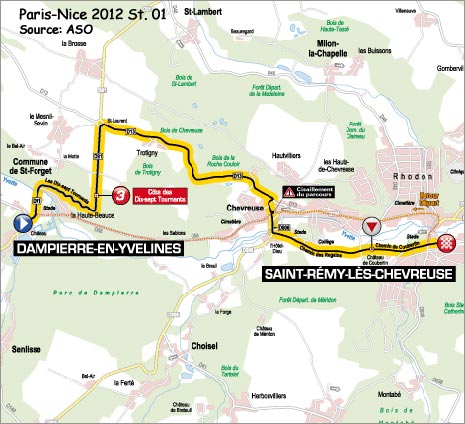 So with the circuit just around the corner from my temporary Parisian abode it was time for me to get the bike out of storage, put on my PEZ winter kit and check out the terrain of the 1st stage 9.4km time trial from Dampierre-en-Yvelines to Saint-Remy-les-Chevreuse. Hmm, only 9.4km I hear you say, that sounds pretty easy, right? Well, I thought so too, until I actually did it. 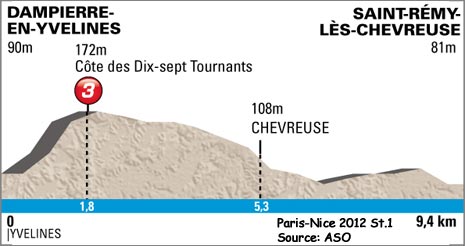 Almost straight out of the blocks the riders have to face a tough hill which the locals call the Cote des Dix-sept Tournants or the ‘Hill of 17 corners’ and those corners are there for a reason – it’s actually pretty steep. No, it’s not Mont Ventoux or Alpe du Huez but it does have an average gradient of 6.2% that lasts for 1.1 kms, and with that coming after just 700m it’s going to hurt – a lot. I rode over it in the 53 x 21 going pretty hard but I’d say Wiggins and co. will probably do it in the 53 x 17 and make me look very average indeed. 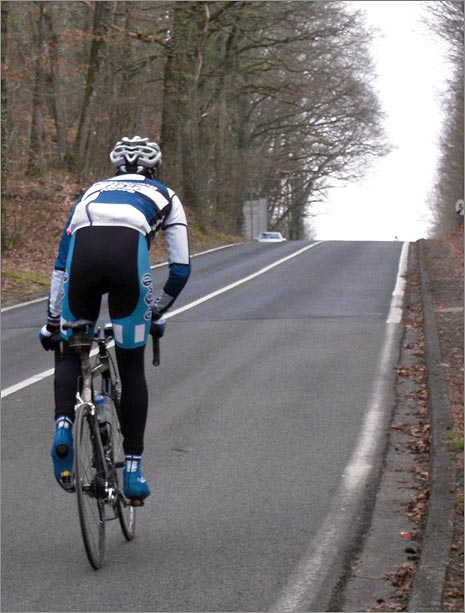 Chris has the 17 corners behind him now as he tries to power up the finishing straight of the Cote des Dix-sept Tournants.

The 17 corners provide nice relief to the riders and a good climber could gain quite a lot of time on this climb but he better be good on the flats too because there’s a long flat run through farmlands straight after the summit. After cranking out the 53 x 11 on the flat, it’s time for a nice descent of around 2kms with numerous corners where braking simply won’t be necessary, but where the riders will have to be attentive with manhole covers simply everywhere. 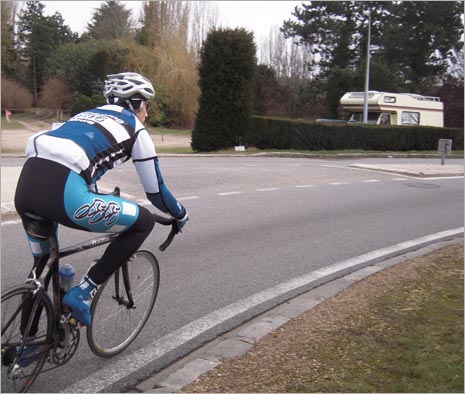 Chris gets ready to dodge some manhole covers…

So no braking necessary all the way down, just keep spinning that 53 x 11 as hard as you can and watch for the manhole covers, pretty simple stuff so far really. Just after entering the village of Chevreuse it becomes more interesting for riders and spectators alike though with two fast, yet tight corners in a right, left combination that should give the spectators some action to watch and those riders that haven’t pre-ridden the course perhaps one or two anxious moments. A pre-ride at speed is advisable here for riders that have any intentions to win the race as a proper line could save a couple of seconds which could make the difference as I’m expecting things to be very tight at the top of the leaderboard.

After those two good corners and a quick crossing of the town it’s back into the farmlands for the final run home to Saint-Remy-Les-Chevreuse and it’s a relatively flat affair except for a 400m long drag at about 3%, 2kms from the line that shouldn’t cause too many problems for those going well. It could be a different story though for those that gave too much right at the very start of the tt (like me~) so it would be advisable to leave a little left in the tank for this final run home. 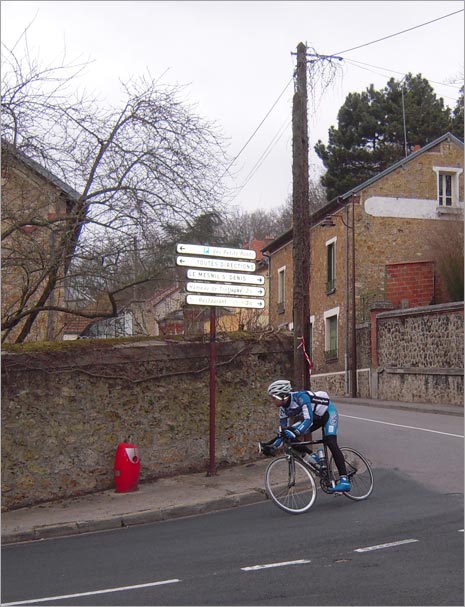 Successfully negotiating the most difficult corner of the circuit, a sharp right hander to be taken at 50kph race speed – or 30kph as demonstrated here….

So now that I’ve seen the course first hand and suffered my way around it, who do I think is going to win this first stage? After their impressive recent showing at the Volta ao Algarve, SKY duo Bradley Wiggins and Richie Porte would have to be my favourites for this race but you couldn’t discount Tejay Van Garderen who comes to Paris Nice as BMC’s team leader, world time trial champion Tony Martin (Omega Pharma- Quickstep) or his new team mate Levi Leipheimer. In fact a quick look down the start list reveals most of the best stage racing talent that our sport has to offer will be lining up on Sunday with just two notable exceptions, Cadel Evans and Alberto Contador – not competing here for two very different reasons. 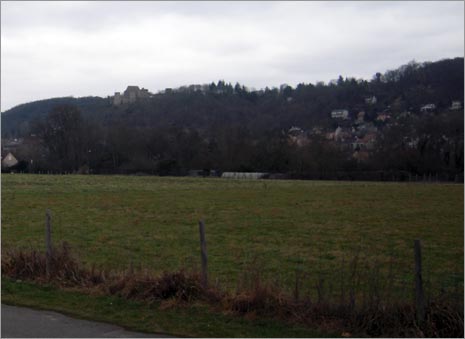 It’s hard to believe that just 35km from the hustle and bustle of Paris are villages like the finish town of Saint-Remy-les-Chevreuse here surrounded by nothing but farms and forests.

For the overall title the bookie’s favourite seems to be the returned from suspension Alejandro Valverde (Movistar) but all the names mentioned above will be pushing him hard the whole way. It will also be interesting to see the early season form of the Schleck brothers who will be lining up with their new-look RadioShack-Nissan team. Has Johan Bruyneel taught them how to time trial over the winter break?? For their sake I hope that they’ll certainly beat my time anyway…