PEZ Previews: The Hell Of The North

Preview: ‘It’s a circus and I don’t want to be one of the clowns!’ It’s not everyone who thinks that Paris-Roubaix is ‘Queen of the Classics’ – those were the words of Chrono King, Chris Boardman. But for some, it’s an obsession; it took Frenchman Gilbert Duclos-Lassalle 14 attempts before he finally hoisted that coveted cobble stone above his head, at age 38.

He’d come back to win the following year and is ‘recordman’ on participations, having washed the dirt off in those famous showers 17 times.

De Vlaeminck won the race a record breaking four times and his ability over the granite setts is still talked about in reverential tones. 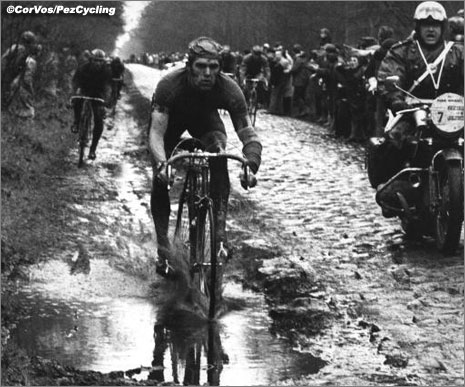 This will be the 110th edition of a race where the word ‘historic’ doesn’t really do it justice.

Paris-Roubaix was first held in 1896 as an exercise to publicise the then new Roubaix velodrome, only world wars have stopped the race from taking part.

In fact much of the northern part of the route runs through the blood soaked soil where many of the world’s grimmest – and most futile – battles were fought.

‘We enter into the centre of the battlefield.
There’s not a tree, everything is flattened!
Not a square metre that has not been hurled upside down.
There’s one shell hole after another.
The only things that stand out in this churned earth are the crosses with their ribbons in blue, white and red.
It is hell! ‘

Those were the words of the organisers after they did their post World War One reconnaissance of the route to see if it was possible to resurrect their event – and how the race came to be known as the ‘Hell of the North.’ 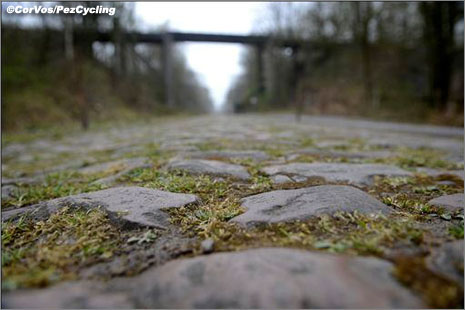 The cobbles of the Arenberg Forest.

If you traverse some of the cobbled sectors – 27 this year, the same as last, over 257 kilometres – you begin to see why this is a race like no other.

Roubaix is pan flat but some of the cobbled sectors perfectly fit American rider, Chris Horner’s description; ‘They ploughed a dirt road, flew over it with a helicopter, and then just dumped a bunch of rocks out of the helicopter!’

The man is right; forget those pictures of skilled artisans carefully laying cobbles in ‘fan’ patterns on to a sand bed, tamping them down with those old fashioned wooden tools.

Some of the sectors have to be seen to be believed.

Rugged chunks of granite poke up at all angles, close scrutiny makes you wonder at the skill of the tyre and wheel manufacturers – not to mention the ability of the riders.

The sectors all have ‘star’ ratings, decided by the organisers; ‘Based on reconnoitring of the route conducted on 2nd April by Christian Prudhomme and Jean-Francois Pescheux, the organisers have graded each of the 27 cobbled sections on the race according to their difficulty, evaluated in relation to their length, unevenness, the general condition of the section and their locations.’

The first sector comes at Troisville with 160 K to go, its 2.2 kilometres long and merits three stars.

The sectors count down from 27 to one with the final sector right outside the velodrome – and these cobbles were laid by the artisans, inscribed with the name of all the previous winners – the Espace Crupeland some 300 metres long. 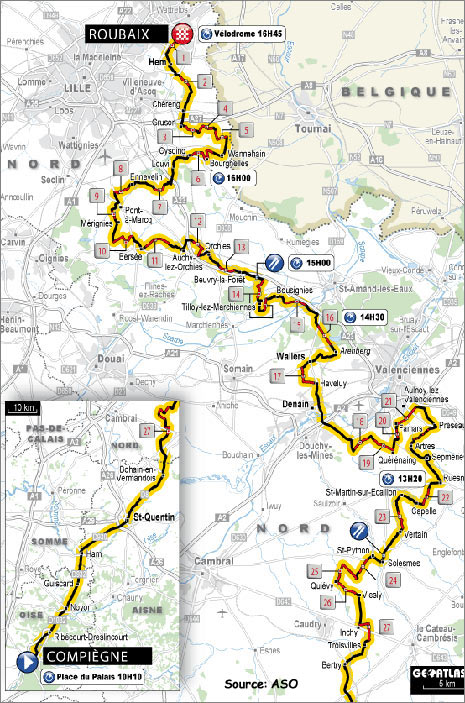 ‘The Arenberg Trench’ is the stuff of cycling legend – an old Roman road slicing arrow straight through the forest.

The television doesn’t really do Arenberg justice; the jutting, slippery ribbon of cobbles drops from the old pit winding tower through the normally quiet forest with its rare plants and birds, back to meet the macadam 2400 metres later.

And to paraphrase the old adage; ‘you perhaps can’t win Paris-Roubaix in the Arenberg Forest – but you can certainly lose it there.’

Given the nature of the parcours, it’s no surprise to see that big men dominate the race’s palmares – last year’s winner, Johan Vansummeren and 2004 winner, Magnus Backstedt are two of the biggest men to feature in the peloton in recent years. 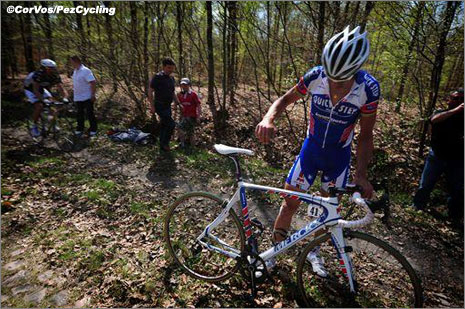 Boonen will be the major favorite for Sunday, but even the three-time winner got his first heaping taste of bad luck last year.

And the two men who between them have won five of the last seven races – Tom Boonen (QuickStep & Belgium) with three and Fabian Cancellara (Radio Shack & Switzerland) with two, are both big, robust riders.

But Cancellara won’t make it three victories this year – multiple fractures to his collar bone sustained in a feed zone crash in the Tour of Flanders have seen to that. 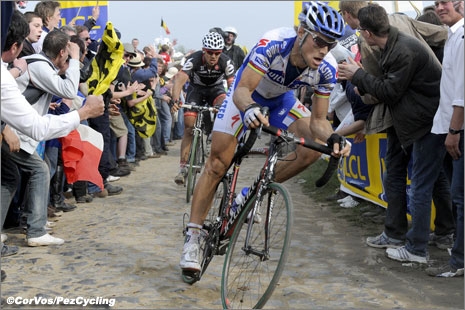 Boonen is back to his best; wins in the GP E3, Gent-Wevelgem and Tour of Flanders testify to that, and in Wednesday’s Scheldeprijs the man’s power was on display for all to see as he and his rampant QuickStep team had the world’s best professionals in a long, snaking line on their wheels.

Roubaix is a race as much in the head as in the legs, and Boonen’s head is perfect – in press conferences he’s referred several times to this being a year for ‘records.’

His fifth win in the GP E3 was a record and his third win in ‘De Ronde’ equalled the record – there’s little doubt that he wants to place himself on equal footing with De Vlaeminck.

The question is; ‘who can beat him?’

The ‘lost years,’ lured by big money in Russia are behind him; at Farnese the pasta is good and so is the karma – we’re back looking at the man who can win Het Nieuwsblad and the Primavera.

And let’s not forget that he’s stood on the podium in the Roubaix velodrome before.

In third spot in the Ronde was Pozzato’s compatriot, Alessandro Ballan (BMC), a former Ronde winner, he’s also stood on the podium at Roubaix. 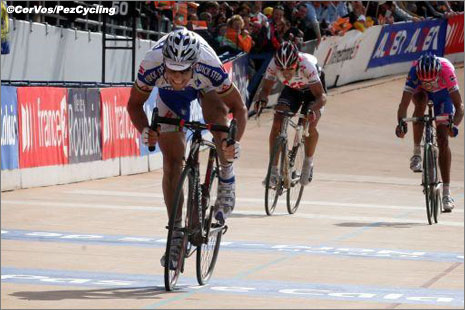 Ballan has stood on the podium in Roubaix before, but unfortunately for Ballan, it was Boonen who blitzed Ballan and Cancellara in that memorable sprint.

He’s been strong since the Strade Bianche and in last week’s Ronde it was his move which the lit the fuse to detonate the race.

Both of these Italians have the legs and heads to win; and whilst Boonen’s form is super, in Paris-Roubaix the unexpected is the norm and a badly timed puncture or crash for the Belgian could see one of them slip away. 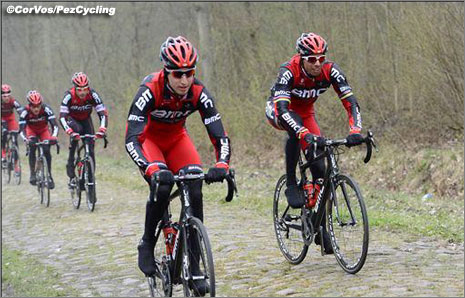 Taylor Phinney will make his elite Roubaix debut on Sunday.

Staying with BMC, they have their Americans – old war horse, George Hincapie and young greyhound, Taylor Phinney – who’s twice won the amateur version of the race. 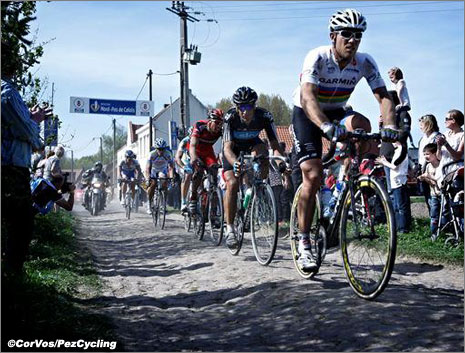 Hushovd will be looking for his first win in the Queen of the Classics.

He says his form is coming – but unfortunately you have to be riding on the crest of it to win at Roubaix.

But sometimes the tactical game can win the race – as happened last year when Garmin out foxed rather than out gunned the opposition for Vansummeren to win. 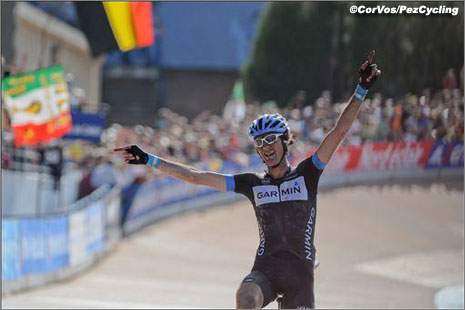 Has it already been a year since Vansummeren’s win?

The American has been concentrating on training for the Cobbled Classics rather than just pure sprinting and the form is there, giving Garmin the opportunity to again play the tactical game.

And whilst it’s unlikely that the precocious talent that is Slovak Peter Sagan can win at just 22 years of age, the Liquigas colours will be there in the finale with Italian Daniel Oss also to the fore. 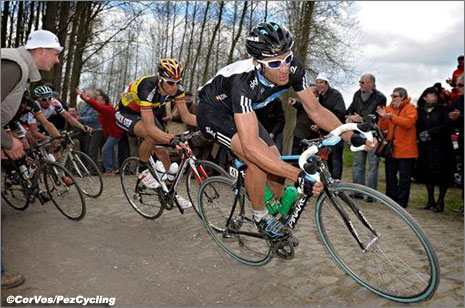 It’s impossible to talk cobbled anything without giving a nod of respect to Juan Antonio Flecha.

Sky have Norwegian wonder Edvald Boasson Hagen and harder than hard Spaniard Juan Antonio Flecha – but ‘Eddy’ has still to come up with a big result in a 260 K classic and Flecha can’t be at his best after his broken hand.

But for all this talk of team tactics and how they could prove Boonen’s undoing – he also has the strongest team in the race.