Race Preview: ‘It’s one thing starting the Ronde as favourite; it’s quite another thing winning it as favourite. It is a long road between Brugge and Oudenaarde, it’s stress every metre of the way; you must be able to handle that constant stress. You must be 100%, all of your team must be 100%, no bad luck whatsoever can befall you, and even then you might be beaten by a better rider on the day.’ Those were the words of Johan Museeuw, earlier this week – one of only three men in 95 editions to win the race three times.

The other three are Belgians Achiel Buysse and Eric Leman plus Italian legend Fiorenzo Magni.

The first edition took place in 1913 as Europe slid towards the ‘War to end all wars.’

The numerous signs for war cemeteries and battlefields in the area leave no doubt as to the fact that this was one of the most savagely fought over tracts of territory in history.

The race starts in beautiful Brugge, from early morning the square – as featured in the film ‘In Brugge’ – is jumping with live bands, the street cafes are packed and barriers lined with fans desperate to see their idols on the way to the sign on.

Usually it heads south, but this year it visits Gistel, to the west – home of Johan Museeuw. 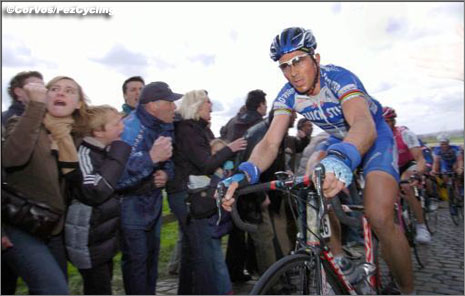 The direction then is south and west towards the wrinkled hog’s back ridge of the Flemish Ardennes which broods above the finish town of Oudenaarde.

Last year there were 18 ‘hellingen’ over 258 kilometres with the famous pairing of the brutal Kapelmuur coming at 15.8 kilometres to go and the less savage, but often decisive Bosberg coming with 11.8 K to go before the finish in Ninove.

But it’s ‘all change’ for 2012; there’s no leg out to Ninove, no Kapelmuur and no Bosberg. 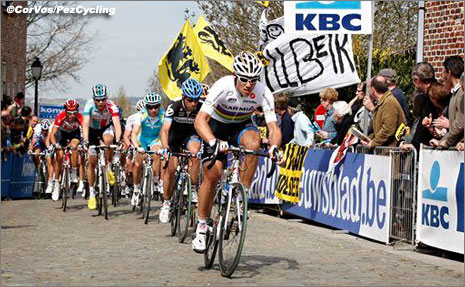 The middle section of the Oude Kwaremont through the town of Kwaremont is often the spot where the real moves go.

Instead there’s a 255 K parcours with a series of what must be the toughest finishing circuits in the world with the race tackling the Paterberg and Oude Kwaremont no less than three times each – with the wall-like Koppenberg in there too on the first circuit. 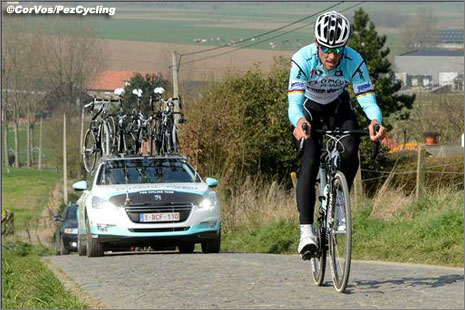 Tom Boonen on the Paterberg, which while only a very short climb, hits 22% at its steepest point.

Whilst the Kapelmuur is a fierce climb in terms of gradient, the consensus among the riders is that three climbs of the long, dragging, cobbled Oude Kwaremont will be a killer.

And on the subject of cobbles or ‘kasseien’ the first sector comes at 167 K near Kruishoutem, where Chris Peers’ used to have a bar and the last are on the Oude Kwaremont.

The final factor – weather – has become less important in globally warmed Europe and this year is no exception with a cloudy, sunny, cool day forecast for Oudenaarde on Sunday.

But why the changes to the parcours?

Former protagonist in the race and Gent-Wevelgem winner, Barry Hoban sees it this way; ‘It’s driven by commercial interests – it means they can stick the VIP’s on the Kwaremont and they’ll see the race three times.’ 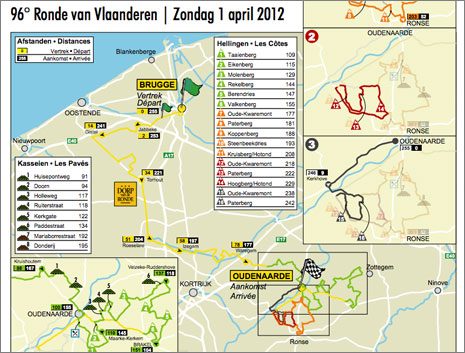 Harsh, but true, the last few years have seen a much more commercial approach to the historic early season Flanders races – Het Nieuwsblad, Dwars Door, Gent-Wevelgem, the Tour of Flanders, Scheldeprijs and Brabantse Pijl are now marketed collectively under the ‘Flanders Classics’ banner.

It’s not to the liking of many traditionalists and the fear is that entry fees to key course sectors aren’t far away – unthinkable, even a few years ago.

But commercialisation or not, the race is still a phenomenon, Flanders is gripped by anticipation.

And this year, expectation as their beloved home boy Tommeke Boonen has returned to his brilliant, best. 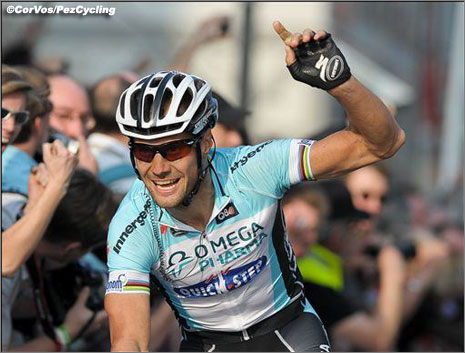 What’s to say that hasn’t been said about Tom Boonen?

All of the newspapers run special previews; there are endless polemics on TV sports and chat shows as the nation prepares for a very special day.

If you’re not roadside then you’ll be in a bar, glued to the TV or hosting your own ‘Flanders party.’

On the face of it, the race is a straight shoot out between Boonen and the last of the Swiss mountain bears, Fabian Cancellara.

Cancellara won the Strade Bianche in impressive manner and was by far the strongest in the Primavera finale – pipped only by the guile of Australian champion, Simon Gerrans. 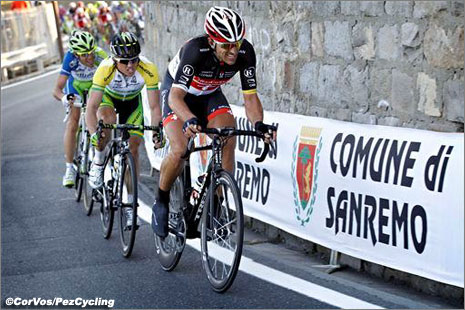 Same: what’s to say that hasn’t been said about Fabian Cancellara?

He’s been strong over the cobbles on the run in to Sunday but bad luck ruled him out in the E3 whilst he merely stretched his legs in Gent-Wevelgem.

He was third in Flanders last year – after under estimating a resurgent Nick Nuyens – and won the previous year.

Form, strength, confidence, experience – he has all of those.

On the other side of the scales is his ‘damn the torpedoes’ attitude, which whilst endearing him to the fans is manna from heaven for the wily foxes who inhabit the pro peloton and have no scruples when it comes to capitalising upon the strength of others

His other Achilles heel is his team; he can rely on little support from Radio Shack in the finale.

Team or no, Johan Museeuw and Freddy Maertens are both putting their money on the ‘Cance’ card.

Boonen on the other hand, whilst the deadliest head of the creature, is only part of the QuickStep Hydra, cut off his head and Chavanel will still be there to deliver the killer bite – or perhaps Terpstra? 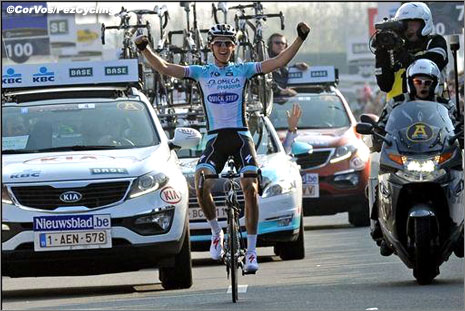 It’s not just Boonen though – OPQS is filled to the brim with contenders…like Niki Terpstra, who won the Dwars door Vlaanderen last week.

Boonen is flying, he looks great, oozes confidence, has the best team around him and the sharpest of wits in the team car in the shape of Wilfried Peeters.

The big man from Mol hasn’t put a foot wrong this year and wins in the E3 and Gent-Wevelgem speak more eloquently than any words about his condition and intentions for Sunday.

If there’s to be a year when Boonen joins the greats on three wins, this is it.

Dutch team mate Terpstra won at Dwars Door, as did 2011 winner, Nick Nuyens – there’s little doubt about his shape, then. 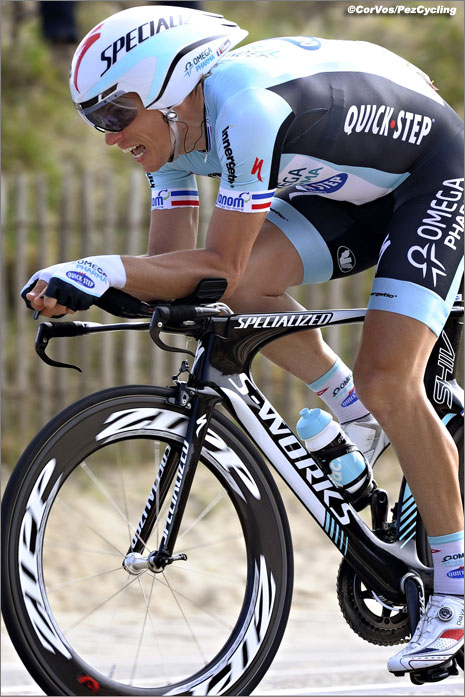 Not to be outdone by Terpstra and Boonen, Chavanel picked up two wins yesterday – the final time trial and the overall at the Three Days of De Panne.

French champion, ‘Chava’ is that rare bird, a Frenchman who loves the Northern Classics.

If there was the least doubt about his form then it was dispelled when he hurtled along past the bars and cafes on the promenade at De Panne to beat the established chrono men and take the time trial and the GC in the traditional Flanders preparation race.

It’s perhaps this performance, as much as Boonen’s great form, which will have caused Fabian to pause over his muesli.

Garmin’s Belgian protйgй Sep Vanmarcke won Het Nieuwsblad ahead of Boonen, but whilst he’s still in excellent shape he’s probably peaked and on Sunday only those at their peak can win. 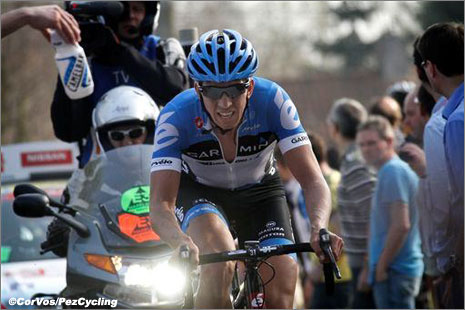 On the subject of peaks, two home riders who have passed that point in their career but are looking to prove points and make amends for lack lustre 2011 seasons are – three times second in the Ronde, Leif Hoste (Accent) and Stijn Devolder (Vacansoleil) twice a winner.

It’s unlikely either will win, but both will be there in the finale.

There’s also a strong Italian challenge; it’s easy to forget, when you look at Filippo Pozzato’s coiffeur and post race ‘man bag,’ that he’s a rider who’s won Het Nieuwsblad, the E3 and Milan-Sanremo as well as being a major player in the Ronde and standing on the podium in Paris-Roubaix. 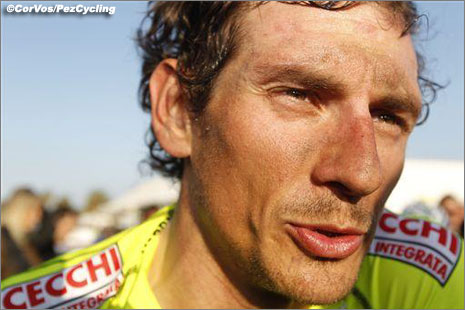 Despite an early season injury he’s put his lack lustre stint at Katusha a behind him and is revelling in the ambiance of a ‘proper’ Italian team at Farnese Vini.

Nick Nuyens tips him, as does our very own Viktor – or at least an Italian winner.

And ‘Pippo’ has back up – team mate Oscar Gatto has become a new man since that Giro stage win last year, shining brightly from the Strade Bianche and providing real support for his more famous team mate.

But the strongest challenge from the Mediterranean comes from the men in blue, white and green – Liquigas. 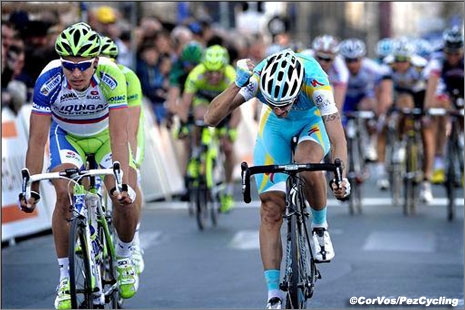 It’s easy to forget that Peter Sagan is only 22 years-old, he’s now such an established winner on the World Tour circuit.

He’s strong, fast, classy and daring – not afraid to fight it out in a ‘hairy’ finish.

He was second to Boonen at Gent-Wevelgem and will be desperate to win a monument after coming close at Milan-Sanremo.

Only his lack of experience in this most technical of races and the impetuosity of youth will keep him off the podium. 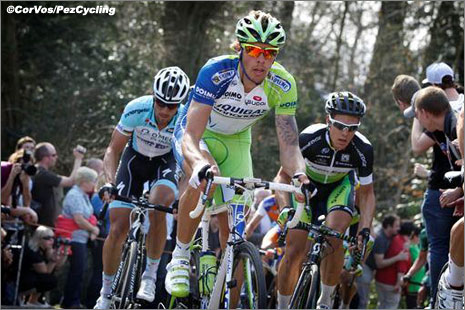 But Liquigas have another card in big Daniel Oss, another man who’s desperate to prove himself.

If there’s one team which will capitalise on the Cancellara/Boonen blood feud, then it’s Liquigas.

A view shared by QuickStep DS Peeters who sees them as his biggest threat.

‘War of attrition’ is the phrase quoted most often in the Belgian press, this week – it’ll be all that and more.

PEZ will be roadside and providing full race reportage.

Then sit back and enjoy one of the world’s greatest spprting spectacles.

Fabian Cancellara: A Slave To His Own Success?