As a lover of track racing through and through, our man Ed Hood was in his element this past weekend as he worked the boards at the Grenoble Six (or 4 as it’s known now) as runner for the US pairing of Guy East and Austin Carroll. Here’s his look at the final two days of racing – from the inside!

It’s wearing on for 01:00 am Sunday, the reality TV shows have all finished for the night, the cat is out, the dog is in and only the hardcore drinkers are still leaning over the bars in Grenoble. But in the Palais des Sports, mechanics are sponging tyres one last time and pinching rear track nuts tight, soigneurs get drinks ready and those last minute nerves mean the riders reach for the pee pails. 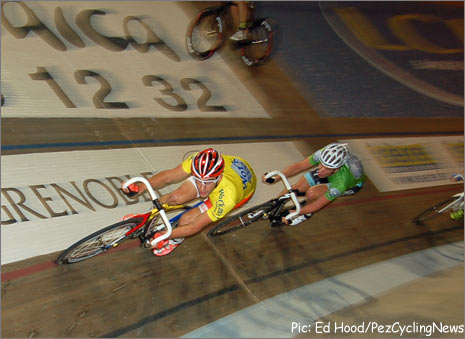 I meet ‘experts’ who tell me they ‘know the six days’ – “they’re all fixed, aren’t they?” they inform me. I used to argue the case, but now I smile and nod – generally the ‘expert’ hasn’t even seen a six day.

There’s no doubt that sometimes the show is choreographed to favour the home boys or a big star – but all of that said, you still have to be able to take the laps. But I’d place a healthy wager on the fact that the Grenoble Four Days were ‘straight’ – sure, it was only a two horse race, but it was great to watch.

If you’re a runner, you don’t see much of the first part of the final chase – all the gear has to be lugged down to the cabin. ‘Les cent dernier tours’ said the speaker as I emerged from the tunnel – ‘the last one hundred laps.’ We knew that the Belgians would attack; it was just a case of when – inside 50 laps to go, was the answer. 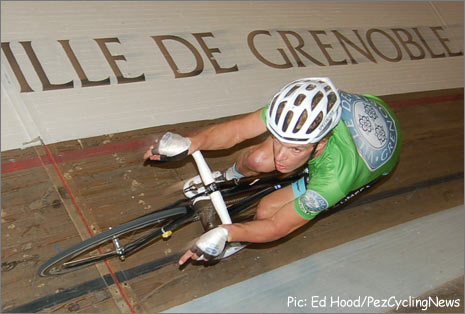 Keisse made the move; catching Kneisky and Coquard off guard as he settled into the beautiful flat backed crouch and scorched open a huge gap off the front of the peloton. 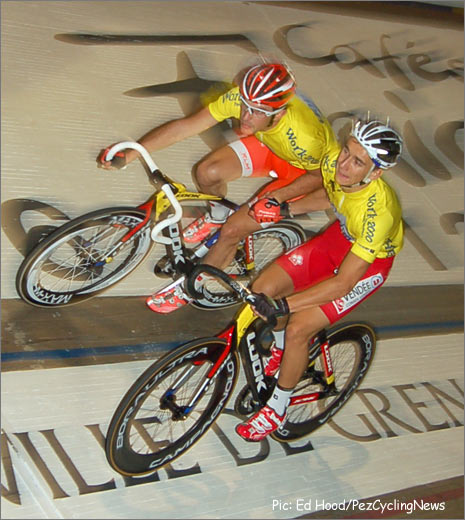 The French did their best in reply.

Whilst the French are fast and spectacular, they don’t have the strength in the depth of the Belgians, and you could see that they were making hard work of their reply to Keisse and De Ketele’s attempts to ignite the boards.

Keisse took the lap but without hesitation drove that superlight Specialized over a suffering string and straight off the front again. 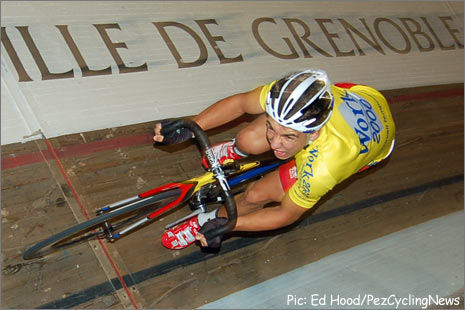 Still the French suffered in No Man’s Land as the Belgians demonstration of pure power continued. By the time the French gasped onto the rear of the string, it was over, Keisse/De Ketele were well on the way to a ‘doublette’ – the six day term for taking two consecutive laps without pause. 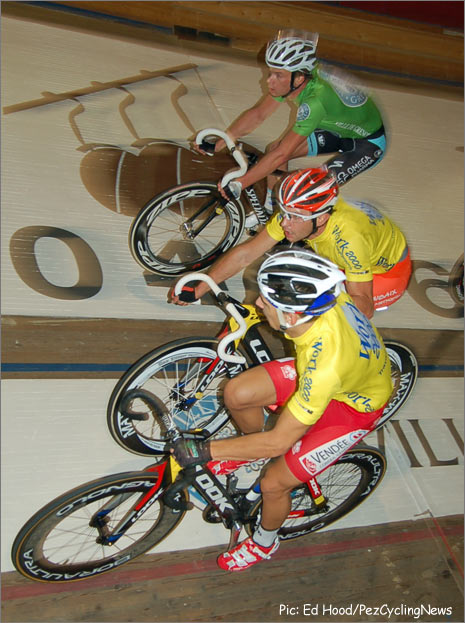 The French didn’t try to counter, it would have looked good for the crowd, but they were wasted. 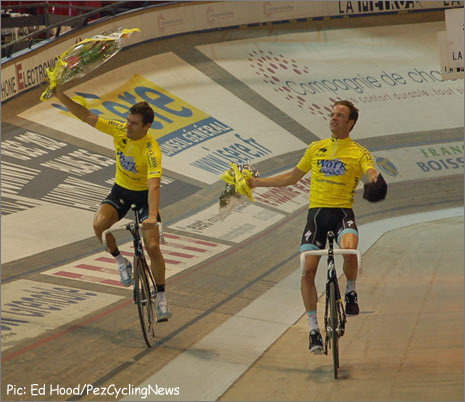 It was quite simply, great bike racing – uplifting and a tonic after the scandals of recent weeks. And the fact that seasoned Italian track pros Ciccone and Masotti were at four laps in third; whilst Copenhagen six day winner Marc Hester (Denmark), paired with world scratch race silver medallist Nolan Hoffman (South Africa) were seven laps back says much about the intensity of that final madison.

On day three, I snuck into the track centre to get a closer look at things. 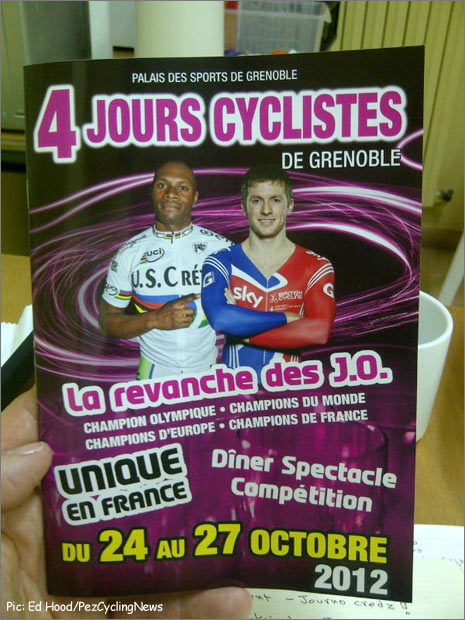 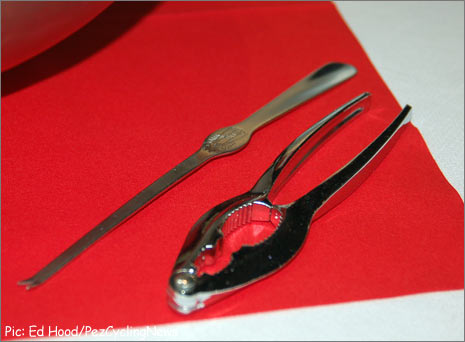 Not exactly your average bike race tools, but needed for the lobster on offer in Grenoble.

The food is a buffet, but to the highest standard – langoustines, lobsters, oysters, the finest of cheeses and cold cuts. Last year it was 63 Euros for the buffet, which comes with table wine, water and coffee – that’s good value for what’s on offer. But when you get into the champers and liqueurs the bill can get serious.

The entertainment is of the highest order; the acts this year were spectacular. 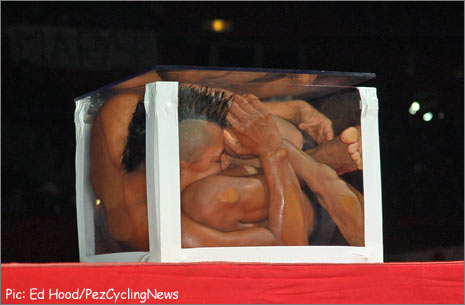 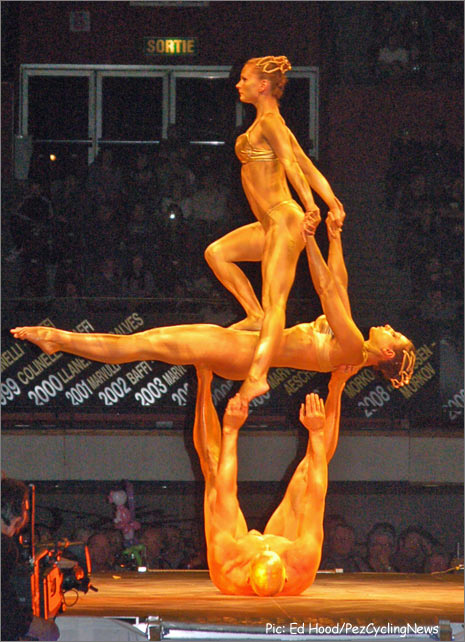 The contortionist packed himself into a tiny glass box, the trapeze artists defied the laws of gravity whilst the ‘golden statues’ act was mesmeric. And then there are the entertainers who work the tables – magicians and the famous ‘balloon lady.’

If to some it sounds a tad ‘tacky,’ be assured that if you’re there, with the jazz, the shows, bikes whizzing past, the food and drink, the light shows – it’s cool.

Up in Zurich and Berlin they like their motor pacing; but in Grenoble it’s always been the sprinters who capture the imagination. France has a great tradition of sprinting from double Olympic sprint champion, Daniel Morelon who was ‘the man’ when I was young, right up to the present with Gregory Bauge in the rainbow jersey. 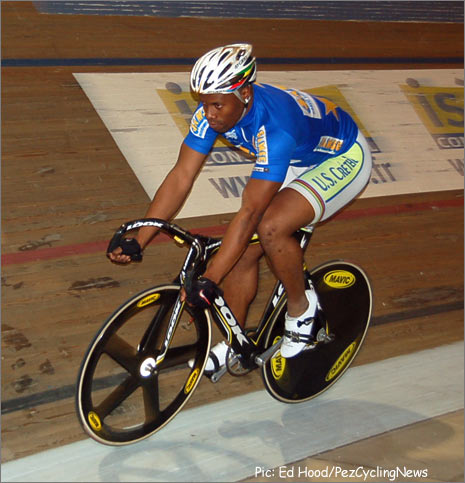 Gregory Bauge concentrating on the task ahead. 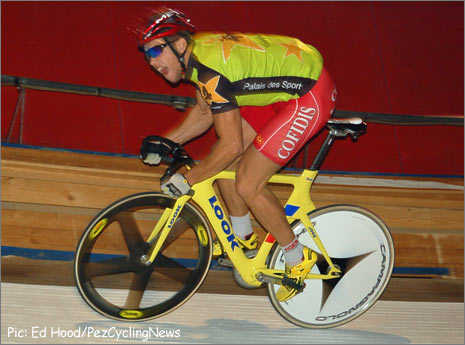 Kevin Sireau giving his all.

Despite the ‘names’ the sprinting wasn’t great – with Britain’s Olympic champion, Jason Kenny head and shoulders above everyone. 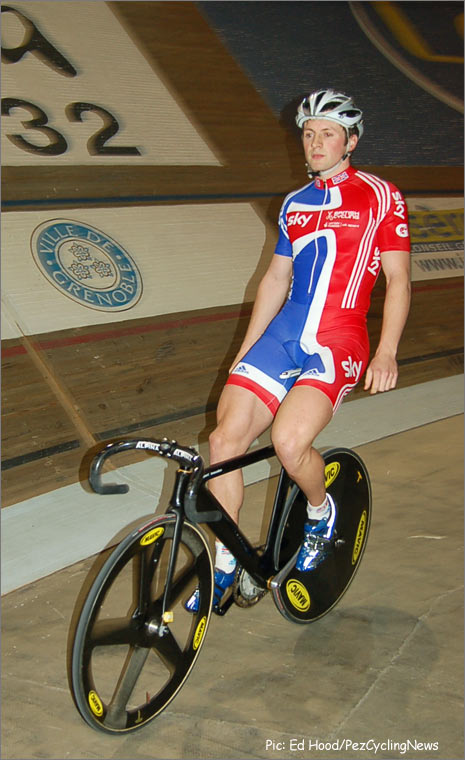 I’ll be surprised if Kenny doesn’t whip that rainbow jersey off Bauge’s back come the Worlds in February. 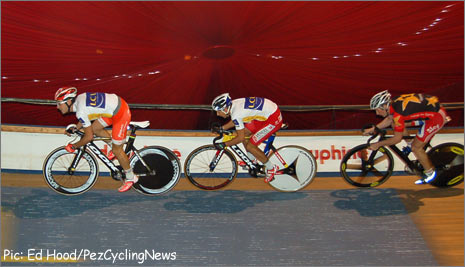 Kenny teamed up with Coquard and Kneisky on the last night to break the track record for the flying start team sprint; 34.643 for three laps – that’s 630 metres. He missed out on the lap record though – his 10.9 failed to match Florian Rousseau’s 10.7, but came after a long night of racing.

Much as the last madison was a fire cracker, it just wasn’t the same without Franco Marvulli. The Suisse 33 year-old ‘recordman’ for Grenoble – with six victories – hasn’t fully recovered from his crash in a French Derny race in August, was ill at Amsterdam and had to pull out of Grenoble with illness, too. Last year he won in Zurich and was second in Grenoble, Rotterdam, Bremen and Berlin.

This year it will be hard for him to repeat that; he’s going down to Spain to train for three weeks to prepare for the Gent six day – so maybe he’ll prove me wrong. 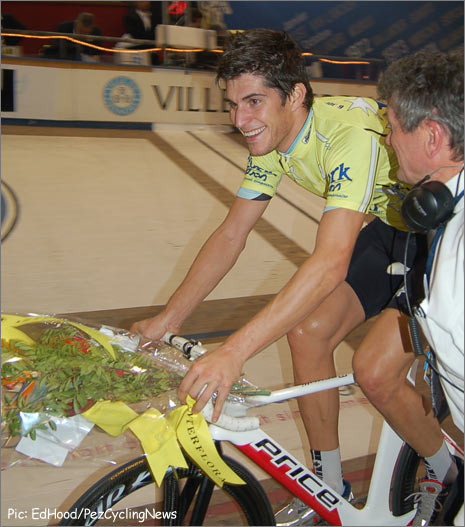 Franco won here in 2010 but this year things are looking tough for the likeable Swiss.

But there are other ventures in his life now; including a Swiss TV show where he tests new sporting goods – I don’t see too many more seasons on the board for ‘Marvellous.’ I’ll miss him – and our Roquefort cheese and baguettes for breakfast in Grenoble. 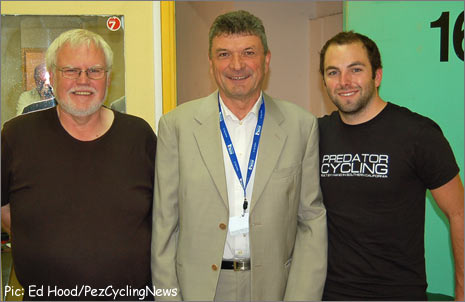 Can anyone spot the ex Tour de France champ here?

Our men, Guy East and Austin Carroll can hold their heads high; they handled themselves well in a tough school. Austin was disappointed to be pulled out on the last night so as Guy could ride with Swiss points race champion Tristan Marguet, who was left without a partner when Franco pulled out. 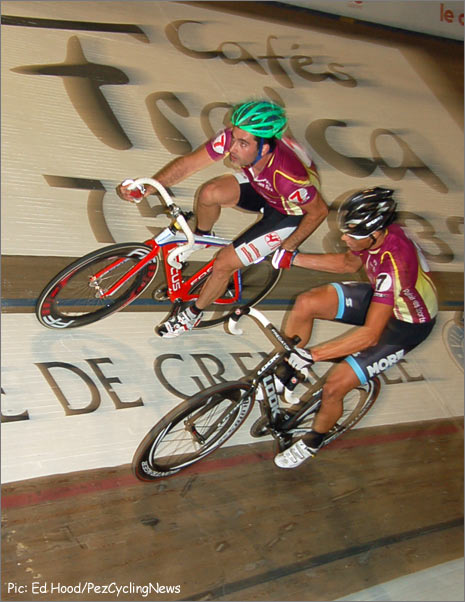 Guy and Tristan rode together on the final night.

And now the circus rolls on to Gent for 20th November. Munich, Stuttgart and Dortmund have all gone; Grenoble and Zurich cut back to four days. Gent is sold out with a month still to go.

Can Iljo return as the conquering home town hero, teamed with Australian omnium and team pursuit star, Australia’s Glenn O’Shea? Or will Kenny De Ketele and Gils Van Hoecke prove that whilst Iljo casts a giant shadow, they can have their day in the sun? 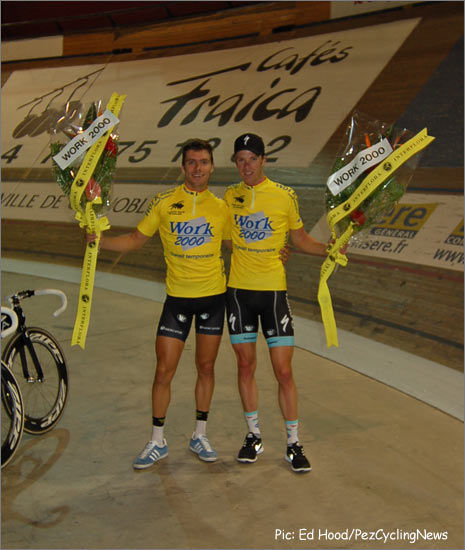 It’s going to be some race – see you there?

Toolbox: Lessons from the Road