The cobbled classics often get lumped together, and for the two super cobbled classics, Flanders and Roubaix, they’re rarely mentioned in separate sentences. It’s a shame, because the two races can’t be more different. De Ronde is justifiably known as Flanders’s Most Beautiful, whilst Roubaix – her nickname is just as appropriate and perfect: the Hell of the North. We were there once again on Sunday, chasing the dust to Roubaix.

By Jered and Ashley Gruber

It seems fitting for the race to be known as the Hell of the North. In fact it’s perfect. With that in mind, it doesn’t even seem that surprising that the name refers to something even worse than the race we consider as the sport’s most brutal. The name comes from the scenes organizers and journalists beheld in the time after the signing of the 1918 armistice that ended World War I, which coincidentally occurred in Compiegne. 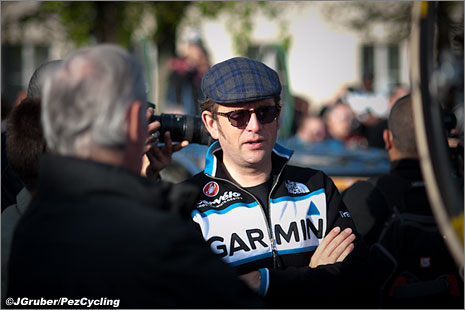 Jonathan Vaughters had to answer a lot of questions last week following Flanders, but there weren’t any that needed to be answered Sunday afternoon in Roubaix.

French sports newspaper, L’Auto, described to readers what their eyes had seen.

“We enter into into the center of the battlefield. There’s not a tree, everything is flattened! Not a square meter that has not been hurled upside down. There’s one shell hole after another. The only things that stand out in this churned earth are the crosses with their ribbons in blue, white, and red. It is hell!” (Thanks goes to Cyclosport.org for the quote) 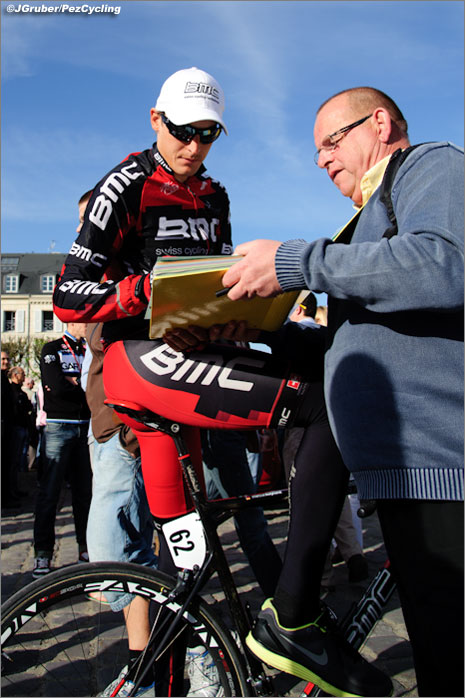 This guy had a huge book with each professional rider’s picture and a place to sign. Marcus Burghardt was happy to oblige.

In an odd sequence of events, we woke up Sunday morning about 30 minutes outside of Compiegne in a small hotel in the beautiful Picardie countryside about to set out on our third Monument of 2011. It was the goal along to cover all the big classics from Sanremo to Liege, but like anything, what looks good and feasible on paper, and what happens, are often very, very different. 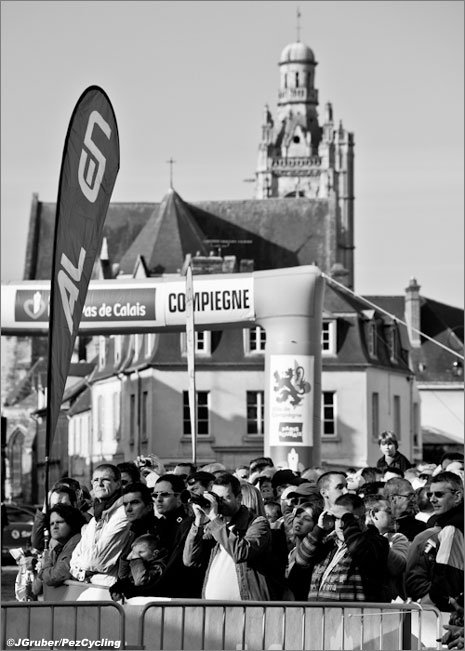 Compiegne: a fine place to see off the soldiers.

Like a lot of North Americans, I’ve been to Paris a few times, but the area outside of the City of Lights has remained a mystery. Compiegne, just under 100 kilometers from downtown Paris, was my first excursion into the beautiful countryside that sits just outside of the city. It’s worth the trip, even if it has absolutely nothing to do with Paris-Roubaix. 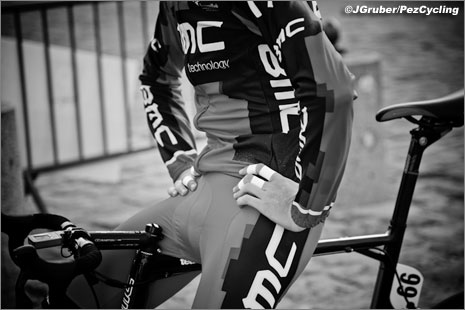 We got to the starting area early and with nary a problem, a complete opposite to the week before when we spent many maddening minutes searching for parking and the press area in Brugge ahead of the Tour of Flanders. 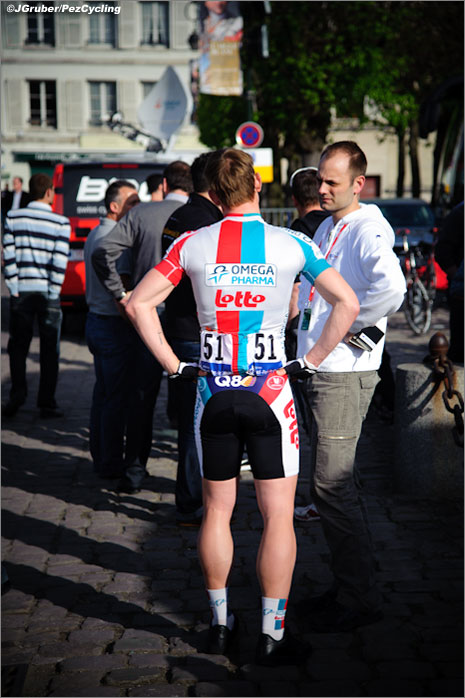 Andre Greipel was once again a pleasant, chatty star at the start. He would later make a critical break and play a lead role in the proceedings.

A quick walk around the team buses to gawk at the steeds of the day, a few chats, and we were off. I’m not a huge fan of race jumping off points. I’ll take the race any day. And so it was – off into the countryside, heading north for Roubaix. 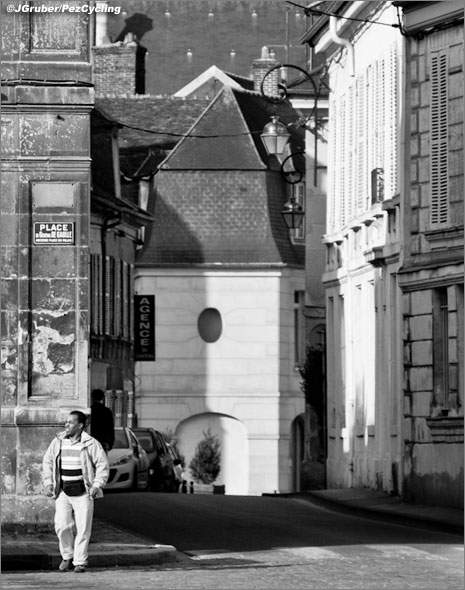 One last shot, then it’s time to go – the view from our parked car.

The fields, trees, flowers, everything is in bloom right now. The vibrant spring along with weather beyond reproach made for a perfect day. Sean Kelly would dismiss conditions like these – he once said that a Paris-Roubaix without rain was not a real Paris-Roubaix. I can’t argue with one of the hardest men in cycling’s history, but I don’t know how easy the trip from Compiegne to Roubaix can ever be. 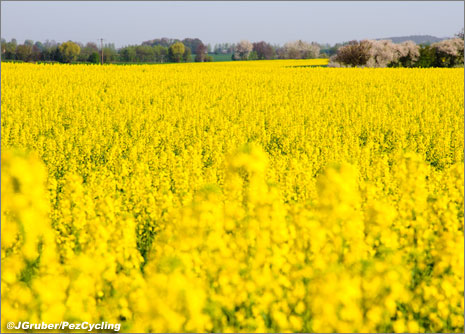 I know words like vibrant, brilliant, beautiful, and the like are overused, but seriously – how else do you describe this? Yellow? 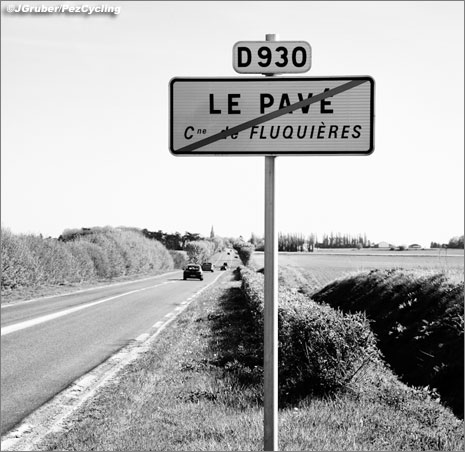 The town of Le Pave comes early on in the route. 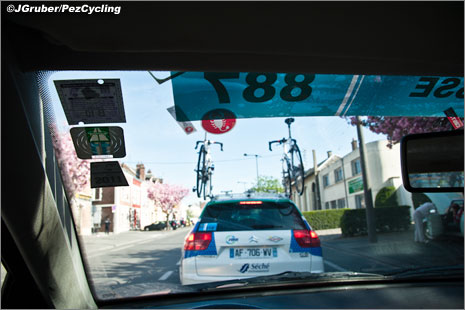 We had some issues with our press sticker staying on the windshield, so we added some reinforcements. Castelli not only make incredible clothing, but useful stickers as well!

Despite Kelly’s former dismissal of pleasant weather at l’Enfer du Nord, the perfection that was Sunday brought in a whole new set of problems. While there was no mud or rain to contend with, the storms of dust that followed the race were visible for what felt like miles if you were in the right spot. We only watched the race in three separate spots, but were covered in dirt when we finally stumbled home to Oudenaarde many hours after our day began. 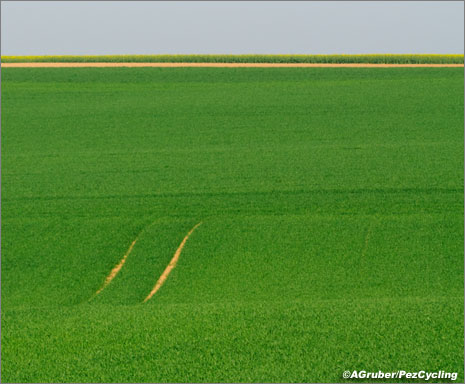 Green fields, almost as far as you can see. 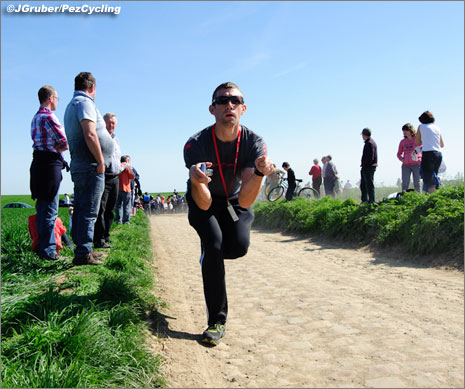 Specialized’s Nic Sims was a happy preliminary model before the race arrived. 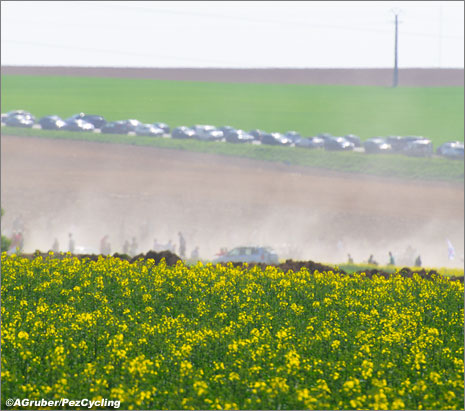 Again, just watching the race, we found ourselves gnawing on granules of dirt, wiping dirt out of our eyes, and blowing our noses only to look down to a black spot on the napkin. 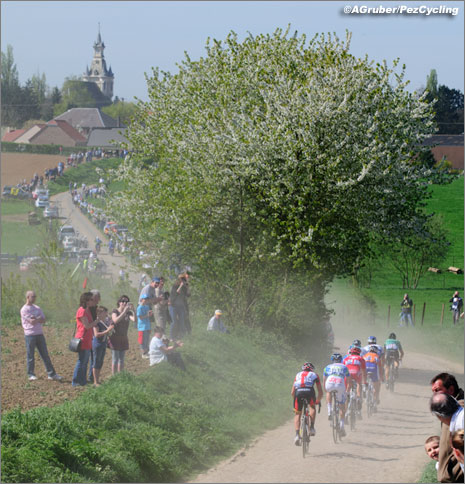 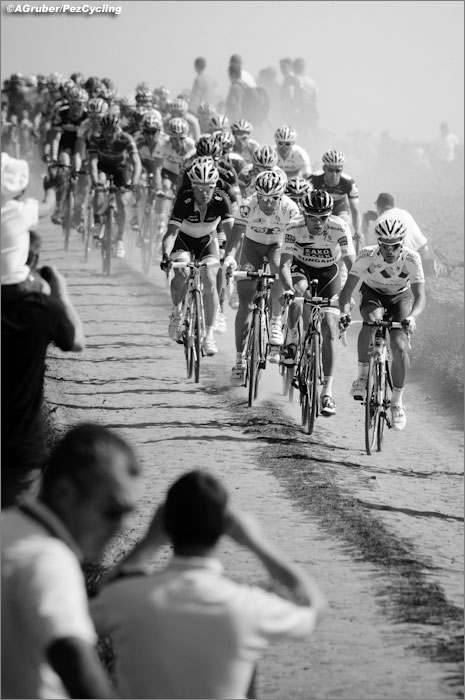 The rumbling onslaught of the field.

I’m not complaining – just observing – I just can’t conceive of how bad it must be to race in that. Add that to the fact that it was warm, plus the fact that it’s hard to get a bottle while weaving from one cobbled avenue to another, put that all together, and that must have made for some intense discomfort. 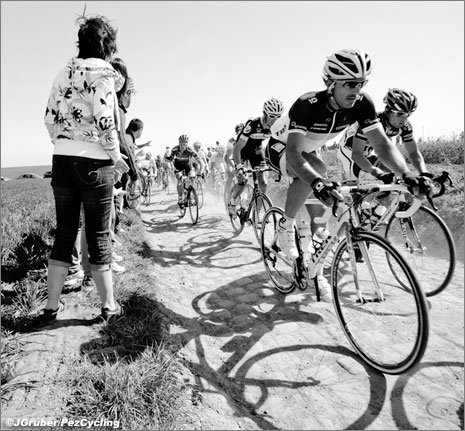 Fabian Cancellara riding with the collected favorites all within arm’s length.

That’s normal though – this is the Hell of the North. There’s no such thing as comfort in a race built around 27 sectors of cobblestones, some in such a state of disarray, that it’s hard to tell the road from the field. Bikes take on a whole new profile – tires heading northward toward 30, cantilever brakes, ample amounts of bar tape, cross bikes and brakes for some, and so on and so on. 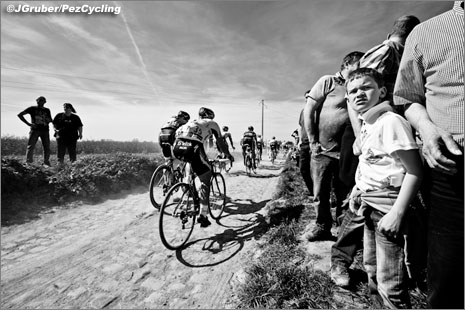 Everything revolves around setting up a bike that can handle the bombardment of almost 260 kilometers of hell, and hopefully in the process, provide as comfortable of a platform as possible for the poor rider that sits atop the bucking bronco. Comfort is a relative thing though – there’s comfort on paved roads, bumpy roads, Flandrian cobbles, and then there’s comfort on the cobbles of Roubaix. It’s just not possible. Oh, and don’t forget – the goal is to stay upright, keep air in the tires, go fast, and win. 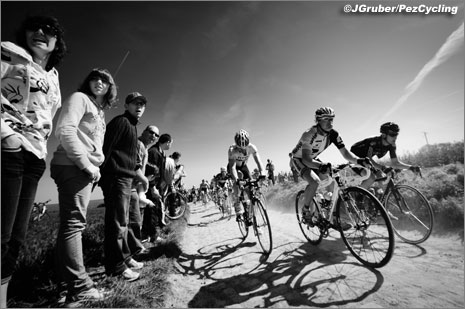 We made it to the first sector of cobbles in Troisvilles without any worries or problems. We followed the race route for 100 kilometers, honked at waving kids and adults, and smiled our way through the kind of spring morning you dream about in December. 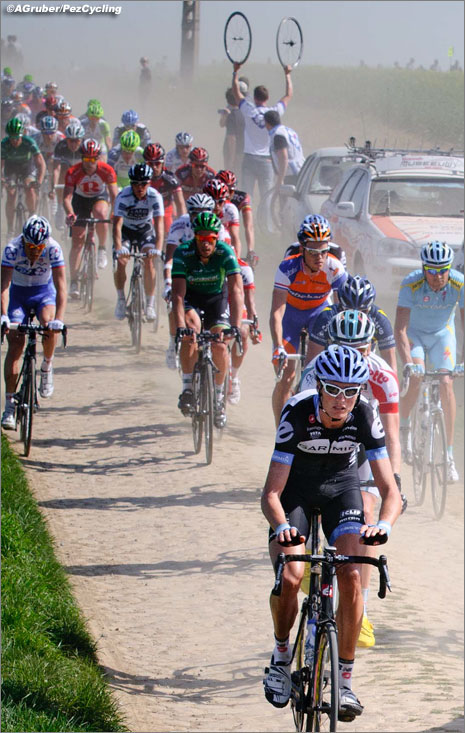 Johan Vansummeren, on his way to victory, gives his hands a little break from the cobbles.

It got a little bit complicated after that.

Ashley and I separated on the Troisvilles cobbles to hopefully give us a wide range of pictures. She got on top of the car with a long lens, while I sat right next to the cobbles with a wide lens. It’s a tactic we’ve grown to enjoy – one goes long, one goes wide, we come back, compare, then move on. It’s fun. 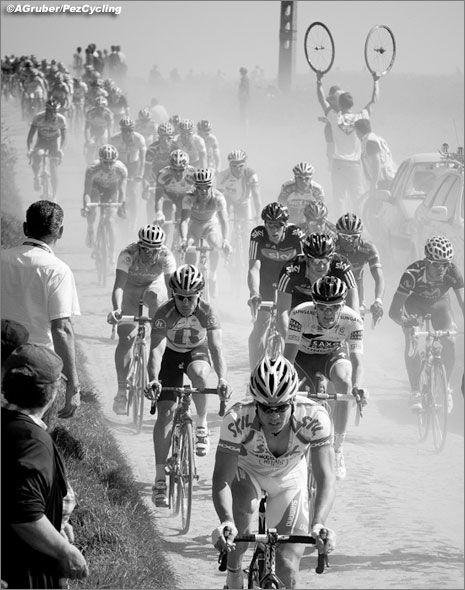 Unfortunately, it usually means that we end up sitting apart for a half hour while we patiently wait for the race to approach. On Sunday, however, it was more like waiting for the dust hurricane to arrive. I’ve never seen so much dust in my life. It was amazing. The shapes of riders and cars coming through the cloud would have been eerie on television, but in person, it was just loud, frantic, bizarre, otherworldly, and unique. I trust I won’t run into that situation at too many bike races. I think l’Eroica is pretty much the only other major dust devil race. 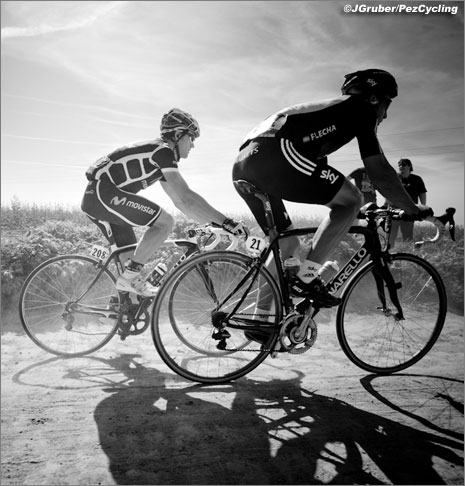 The break passed by in one steady line, another group followed behind, and then it was the turn of the field. The opening riders introduce the concept of what’s to come, but the field’s passage is just not something you can prepare for. The ground rumbles, wheels whir, bikes creak, shouts are muffled in the dirt, and just as quickly as you enter the chaos of the field in the midst of a cobbled section, they’re gone. 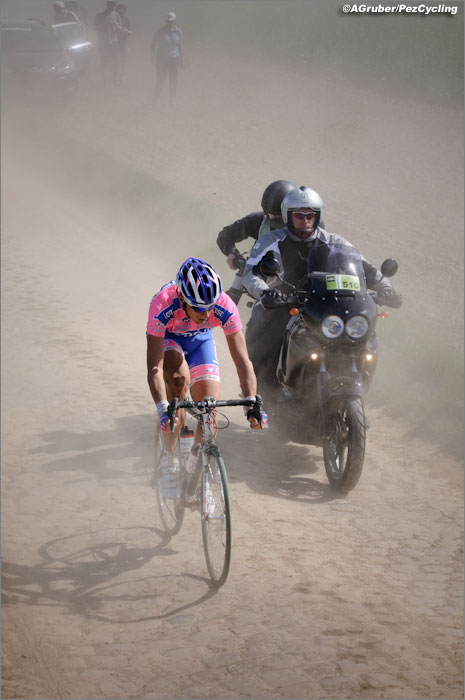 A Lampre rider somehow manages to keep his head above the dust.

Then there are the stragglers. The first of them chase desperately, hoping to get back into the relative comfort of the melee. As each passes, the frantic gradually turns to resignation, and by the time the last rider rolls by on the first sector of cobbles, he’s bouncing along at the pace of a tourist. Not to encourage cliches, but you’d never guess for whom he races for.

If you guessed Euskaltel, you are absolutely correct. 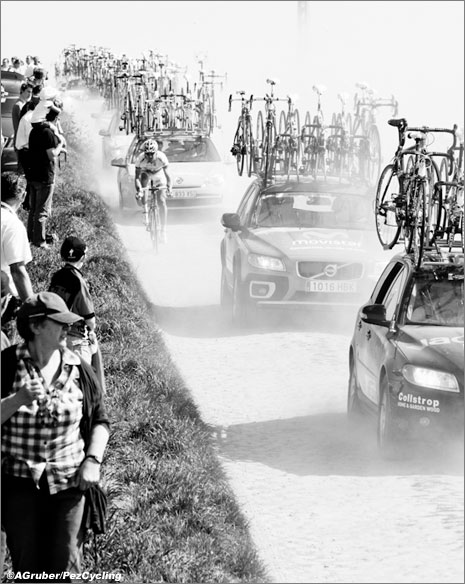 The cars looked like they were a nightmare to ride in on Sunday.

Unfortunately for Ashley, Kristof, and myself, we had the unfortunate pleasure of following him through a number of sectors, because as a press car, we couldn’t enter the racing area -we have to be either just behind or a fair ways in front. Fortunately for us, the Euskaltel rider, who was obviously being punished for some misdeed back home in the Basque Country, eventually pulled over and helped himself to a spacious broom wagon. It wouldn’t be very long until he got some resigned, dusty, coughing, tired companions. 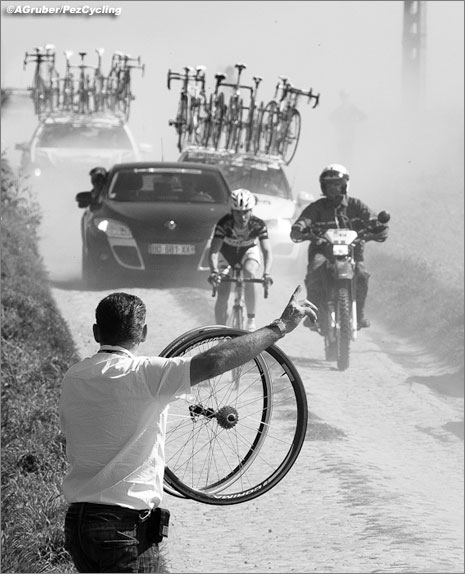 Wheels? Anybody need some wheels?

Once Mr. Euskaltel called it a day, we roared by hoping we could get back in front of the race, but it wasn’t to be. In the midst of our roaring, we missed a very important turn, and so began our day of missed turns. Our Euskaltelian friend was our first undoing of the race, the failure to turn was the next. Those were just the first two. The list would continue to grow, but looking back – who cares?! It was fun. We chased, we watched, we drove the cobbles, honked at fans, and found ourselves in arguably the center of the cycling universe yesterday. 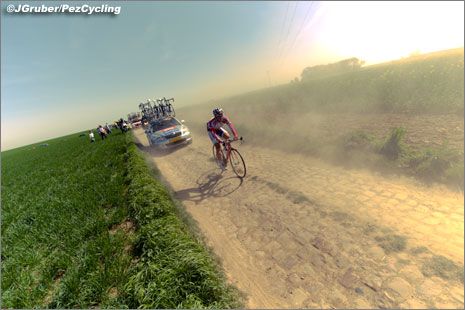 Sure, it would have been nice to notch up a few extra viewing points, but sitting here now, I have no regrets. We’re learning, getting better, figuring out how things work, and eventually, we might find ourselves experienced. Probably not. 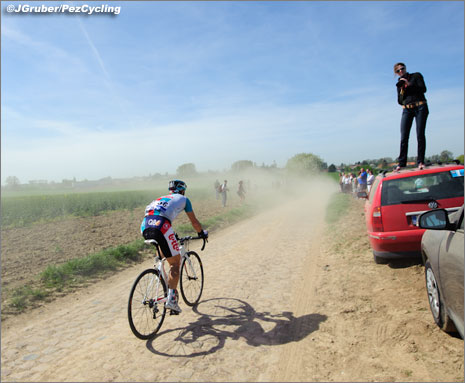 Ashley standing on our red wagon, snapping the riders roll by.

We’ll continue on tomorrow with Sector 18 and Sector 4. You might have heard of four before – it’s the sector where the race is made: the Carrefour de l’Arbre.