Roadside Report: A day started very early and not yet finished. A never ending chase of the longest race of the year. Lots of faces, images and stories to put down in words and photos to try to get you there, at least for a moment. I’m at the table of a fast food on the highway heading south, back to home, where I will come in the early morning of Sunday. And everything will be over…

The plan of Milan Sanremo is always the same – enjoy as much as possible. It’s the race of my dreams and what I find very difficult to explain is the fact the morning of any Sanremo I feel excited but also little bit sad. Why? Because I know in few hours that it will be over, and I will have to wait another year to get the same excitement! 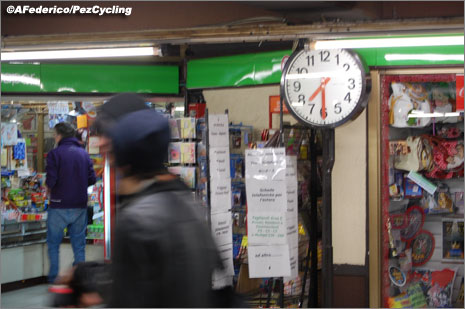 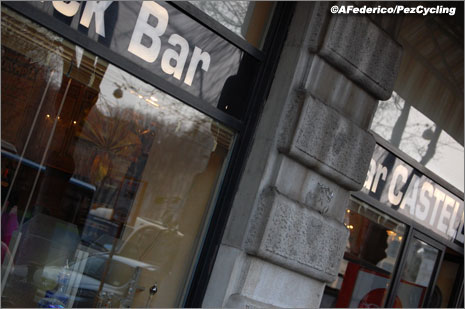 Our bar in Piazza Castello, but there’s no one else from the PEZ-crew in attendance this year.

What I love most is to come in Piazza Castello very early and have a coffee in the PEZ-crew bar Castello. Unfortunately this year I’m alone: no Ed, no Jered and Ashley, not even Matt, who usually comes for the start. However I have the luck to meet an Italian friend found on the web. Pedale Forchetta is a very good photographer and it’s nice to meet him in person. He will also chase the race and will be a pleasure to watch his work on his gallery in the next days. 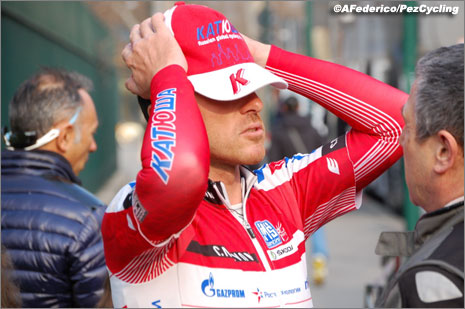 Riders begin to emerge from the motor homes. 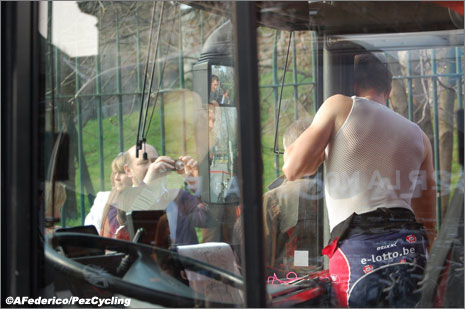 Meanwhile the teams are coming and that sweet moment starts when people try to watch through the windows of the motorhomes and stand waiting for their heroes. There are a lot of people on this warm Saturday morning. The weather is really nice and the sun is already high. A call to my mother living in Genoa: on that side the weather is cloudy but not rainy. Many minutes pass as the riders become nervous, they look like students at their first important exam. They smile to the people screaming their names, someone also stops but their head is already at the race. 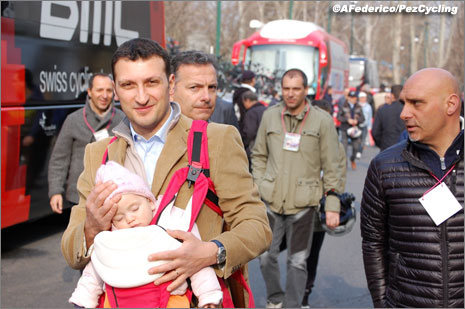 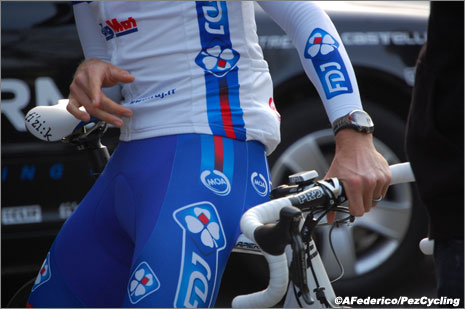 Time passes, the riders are nervous.

While the race is moving to the departure I also start my long, exhausting, exciting chase. The time seems so long in the subway while moving south to the car, and I decide to tweet something just to avoid to think about the time passing. Every year the same fear to miss the first passage at Binasco roundabout, where usually the early breakaway starts. There’s already the people waiting and I have also time to quarrel with a policeman who insisted I move my car from a place where several other cars were allowed to stay afterwards. 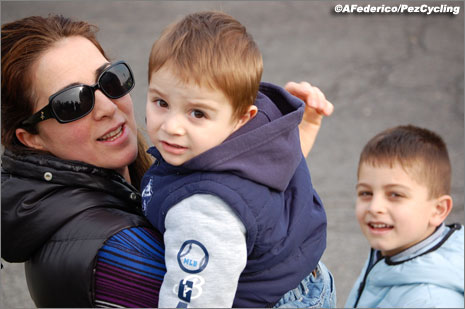 The race is coming, and the break is already taking minutes (just 10 km from the start). The bunch is not taking it seriously and this is quite normal. The last time a breakaway born in Lombardy arrived in Sanremo was 1987…. So, the bunch passes at slow speed and we can clearly listen riders chatting and joking each other. 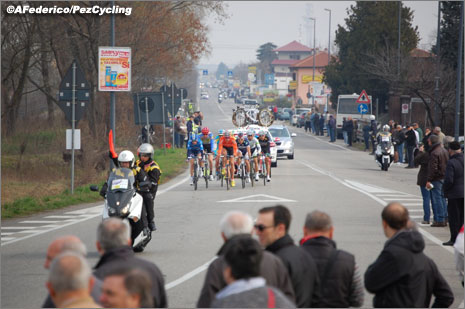 Here comes the break – as every year!

It’s time to go to the next passage which is Pontecurone, after 70 km of race. Usually here the group start to chase hard, but today I have the opportunity to catch the pissing time (I hope that won’t be censored): it’s years I was trying to get that picture! The nine riders ahead are having a good gap (almost a quarter of hour) but they know they have a small chance with more than 220 km to go and all the climbs ahead of them. 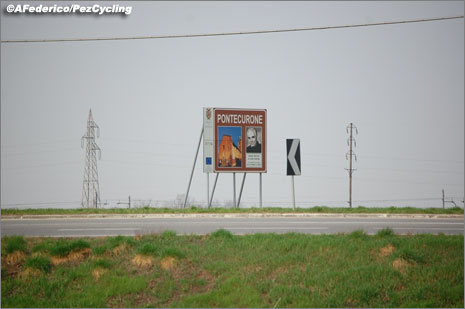 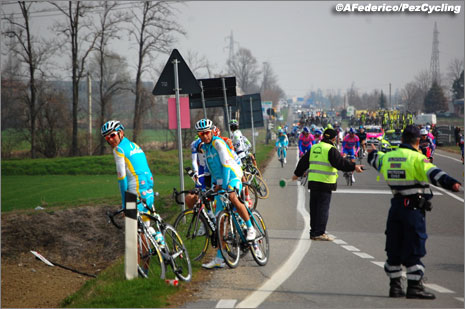 It’s also focaccia time for me; it will be a long day and I cannot permit to lose even a pound from my fat stomach. Here in Pontecurone the focaccia is just a terrible fake of the Genovese one, but I will have no time to buy another one later on. Anyway, it looks nice. 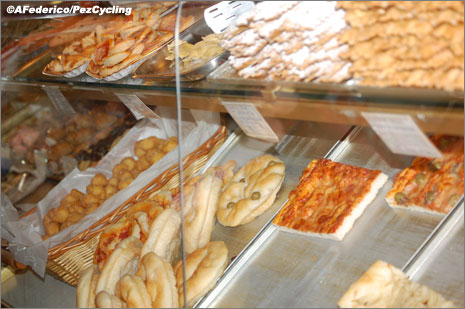 So, another drive to the most exciting passage, the one from the top view on the highway. Even if I believe it will be the last I will do: too dangerous. Too many people are knowing this place and the cars are dangerously parked too close to the traffic. I admit I had fear. So, I just found another one with a retro view which is really not bad. 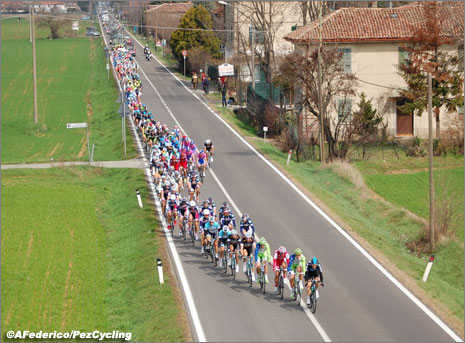 A nice passage, but too dangerous. 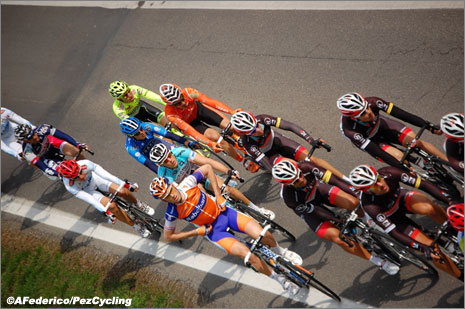 The Apennines are coming and the air starts to be chilly. Cloudy on the mountain top but it won’t rain. Another fast passage in Ovada and the traditional one in Varazze to watch the seaside after so many kilometers of flat. It’s also eating time for the riders after the feeding zone just before the Turchino. 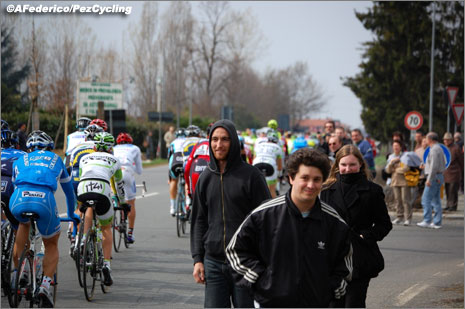 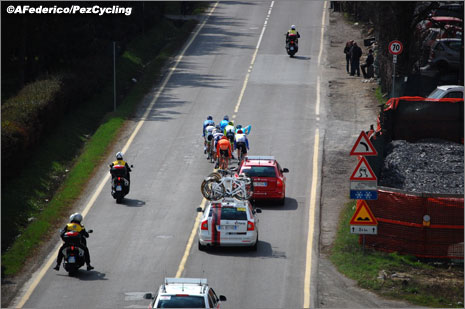 This highway overpass is nice, and also not known, so less dangerous. 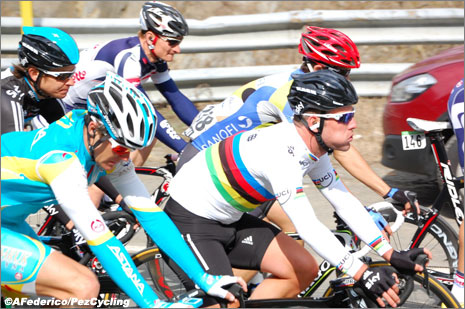 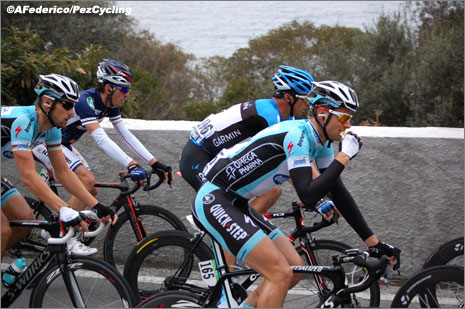 Here we are on the sea – another race begins.

The next “hot moment” will be the Manie climb and over there we will discover who will lose the race. The surprise is really big, when the radio-race car announces Cavendish in trouble. He was the favorite number one for many. The group is still quite packed. Not a big selection, except for the Brit. But everybody knows the big difference is made in the downhill more than not on the climb. In fact, while driving to Andora the radio announces the group split in two, as it happened last year. 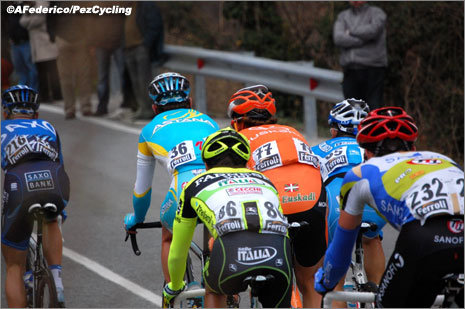 The break on the Manie, losing time. 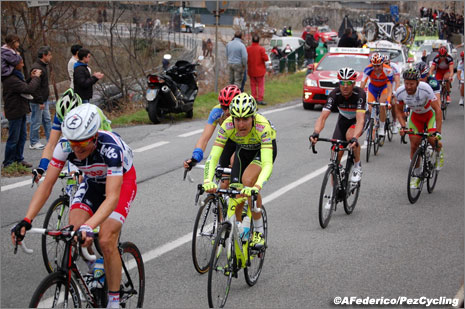 Our friend, Caccia, suffering, but not losing any wheels. 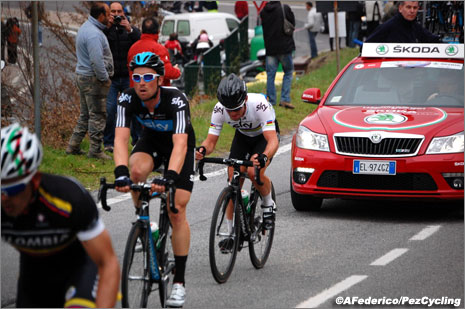 Cav out the back and chasing – his race is over. 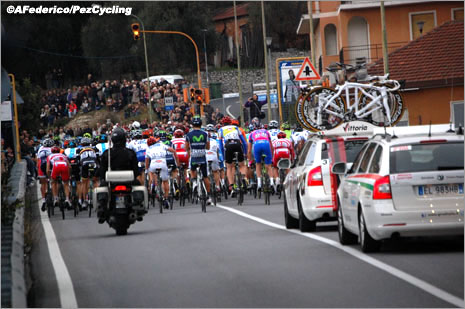 The first group approaches the Capi.

One minute, a minute and half, the bunch ahead continues in the pace and this will grant a good selection at the end. While approaching the Poggio the sun comes out and comes out also a strong wind blowing from the sea to the hills in the same direction of the race. This will allow an attack on the top. On the Poggio I decide to find another spot point, different from past years. 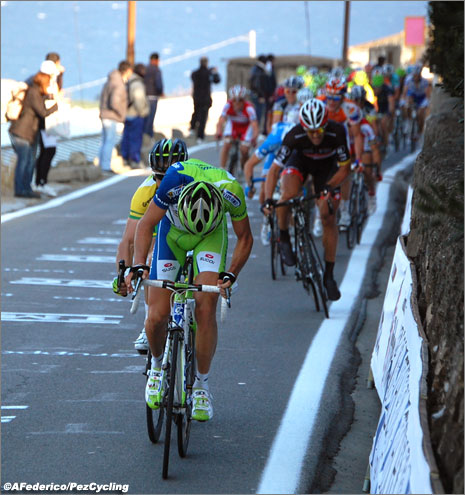 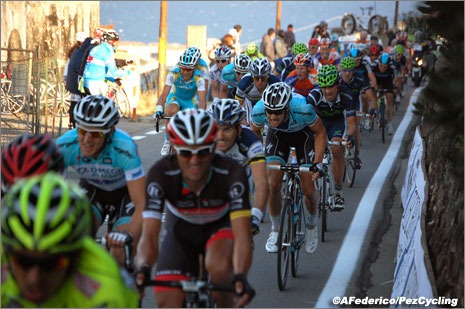 Even Boonen struggles to hold the wheel.

I do not like a day someone will say my pictures are all the same (except for my wife and my daughter who say already). The new spot place is awesome: it’s exactly the place riders usually try an attack and that’s how I can catch Nibali who, unfortunately is too busy to look a moment into the camera. The passage is less than a moment and after that I realize that the race of the dreams is over once more. 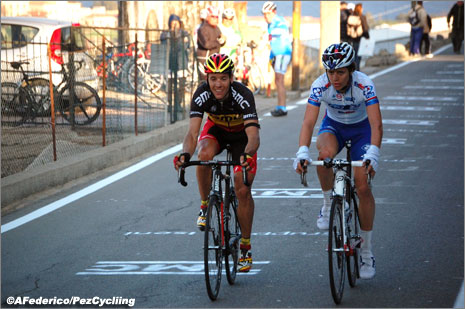 Gilbert climbs easily, his race ended with a crash on the Cipressa.

I’m one year elder and now I feel all the last 366 days on the shoulders. It’s hard to admit other 365 need to pass before having the same emotions. The day has passed so fast and my only think now is to the road I have to complete before come into my house. Find my wife sleeping. The cat looking at me. 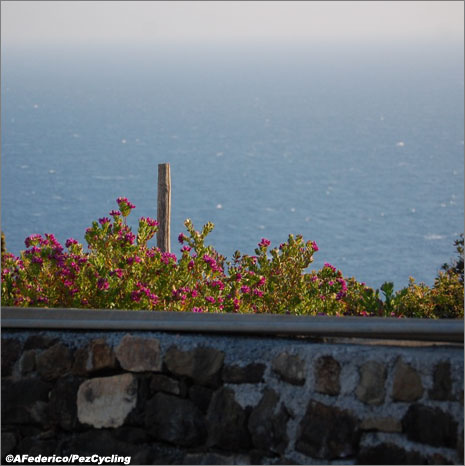 Ahhh, the sea! See you next year, hopefully!

My daughter still dressed but sleeping on the sofa and the little 5 months Mario grooving in a world he only knows. I say myself that, maybe, just him a day will understand the passion of his father for this special race. Now I think maybe a day we will chase it together, or maybe not. But, what’s more important is the fact I start again to look forward to another eve, another Piazza Castello start, another Sanremo. Which is nothing, but everything. Which is a toy, but moves lives. Imagine you are on the Poggio looking to the sea: just breath this air a minute. Just taste it. It’s air. It’s everything you need.