Roadside Report: So after doing the preview of the time trial course earlier this week it was now time to get out there into the Parisian countryside to watch how the real riders would fare on the course.

First stop for my PEZ roadside report was the SKY team area where I came across Danny Pate’s bike just waiting to be ridden in anger and one of their beautiful new team cars which was just waiting to be driven in anger! Not sure how they’re going to fit the bikes in there but who cares – it looked good. Ok, so it’s probably the boss’s car and not really designed for team use – but it sure did make some of the older Skodas and Peugots from the other teams look very ordinary indeed. 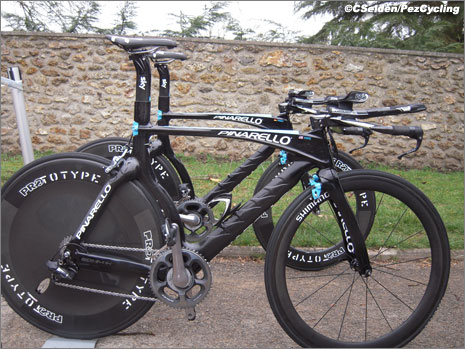 Some of SKY’s beautiful Pinarellos lined up. 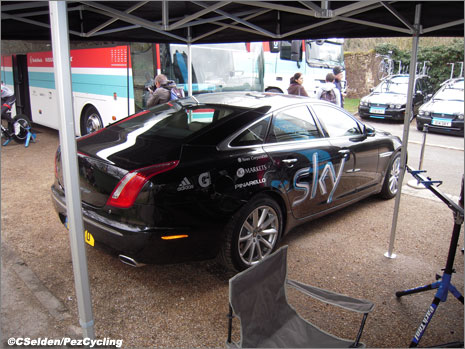 Next stop was the Saxo Bank team where Daniel Navarro was doing a very, very good impersonation of Alberto Contador on the rollers – so good in fact that he was twice asked to sign Alberto Contador postcards whilst I was there. I mean, he is a Spanish climber riding for SaxoBank and he is about the same size as Bert, but still. I think it must be the Bert style sideburns Navarro was sporting that actually confused the crowd – time for a shave Danny…

Also drawing a crowd was the ever likeable Jens Voigt warming up on the rollers over at the RadioShack-Nissan bus along with Andreas Klцden and the Schlecks who were all receiving a lot of advice from the bossman Johan Bruyneel. 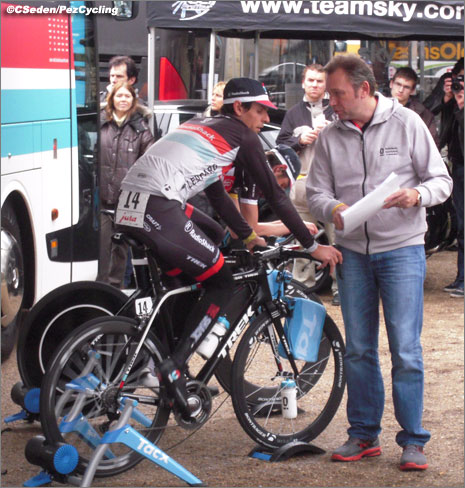 Johan even went over to the BMC bus to tell Jim Ochowicz a thing or two about the race, or maybe to try and sign him up to the team so that Jens doesn’t feel too old? Whatever the case they were having a good chat and laugh anyway and Jim was looking pretty fit – I wonder what time he did around the course? 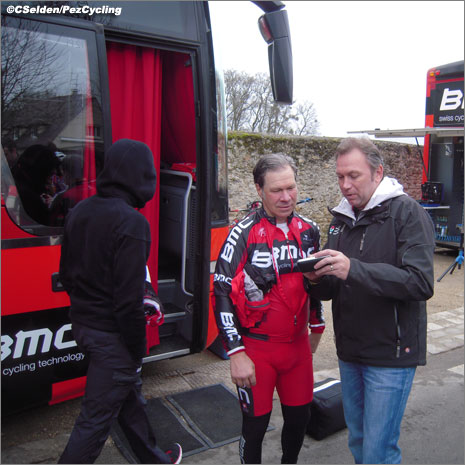 My next destination was the Lotto-Belisol bus to grab an interview with my tip for tomorrow’s stage, two time Paris-Nice stage winner Greg Henderson but on the way I came across an extremely focused Levi Leipheimer on the rollers in his new QuickStep clothing. He was looking fit and mean as he sweated up a storm in the cold conditions and in the end the hard warm-up paid off with an impressive 3rd place just 4seconds behind surprise winner Gustav Larsson (Vaconsoleil). 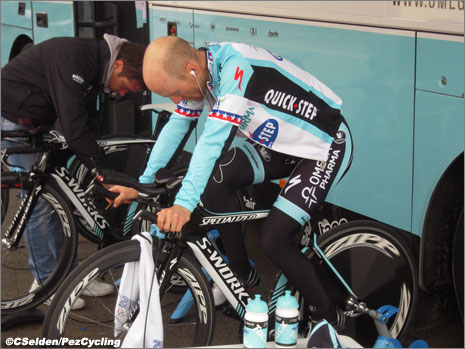 With my interview done with Greg it was time now to go and catch some riders in action out on the course, but just before that I passed by the SKY bus again to see the mechanic lovingly polishing Bradley Wiggins’ bike before his ride and Bobby Julich giving some last minute advice to a very focused Richie Porte. They’ve certainly got things dialed in well at SKY with every rider and staff member alike always informed of what to do at exactly what time. They even had the time trial warm-up efforts posted on the bus with Julich on hand to make sure that everyone followed procedure. 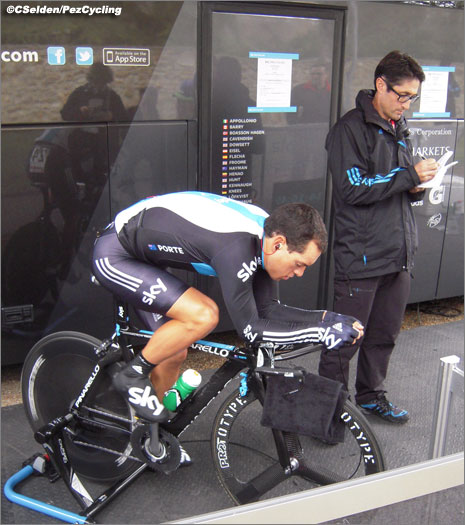 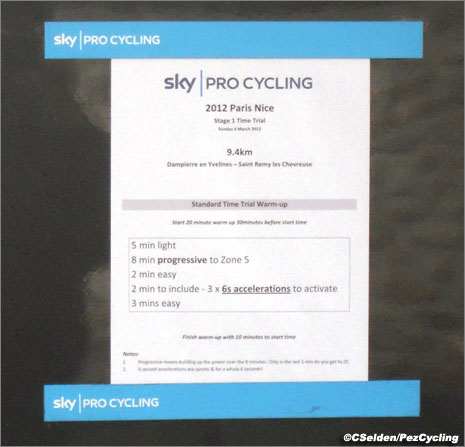 So up to the course now to see some riders and the first one that passed me was Andy Schleck who didn’t exactly set the world alight with his time. In fact, it was pretty poor – just 142nd place for Andy at 1m01s to Larsson meaning that Andy’s GC hopes are pretty much over here before they even started. It was predicted though as it’s early season but still 142nd wasn’t great. 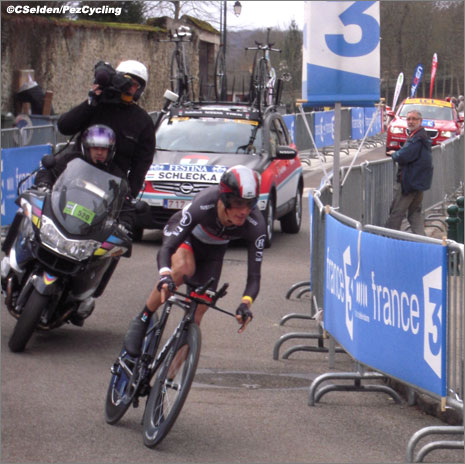 The man who got the most cheers from the crowd today no matter what he did was Thomas Voeckler, but unfortunately for the French favourite he also wasn’t on a good day finishing 135th, 58s down. In fact there were quite a few favourites who lost a lot of time in just 9.4kms, Voeckler, A. Schleck, F. Schleck, Cunego, Le Mevel, Peraud, Basso, Roche, Brajkovic, Navarro and Casar all lost at least 30seconds which will be very difficult to make up in the coming days. 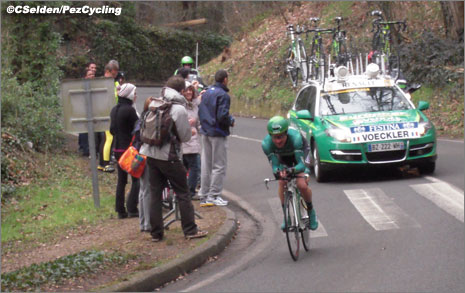 Voeckler got a lot of cheers, but that couldn’t save him from 135th on the day.

For me the favourites for the overall are now Wiggins, Leipheimer and Van Garderen but it’s still very early days. With 7 stages still to go and wet and windy weather predicted the classification could well be turned on its head at any moment. Tomorrow’s stage from Mantes-La-Jolie to Orleans should in theory be the only sprint stage of the race so Larsson should keep his well deserved jersey. 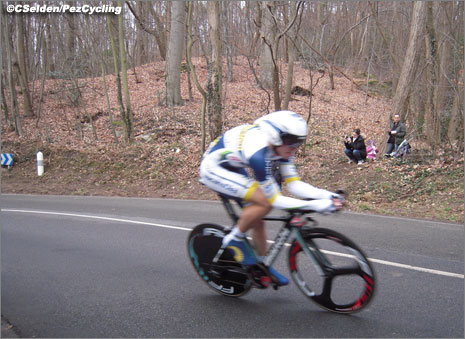 Toolbox: Massage Under A Microscope