Race Report: As always the Clбsica San Sebastiбn was an attack-fest from the start to the finish. Rabobank’s Spanish star, Luis Leon Sanchez showed perfect timing as he rode away from the battling bunch for his second Basque Classic victory. If this is a prelude to what the Vuelta is going to be like, then it will be three weeks of top excitement on the Iberian Peninsula.

As every year the biggest Spanish one-day race (and the only Spanish one-day race on the WorldTour) had all the top Spanish riders on the start line, apart from Alberto Contador who has just finished his come-back race the Eneco Tour, Samuel Sanchez (Euskaltel-Euskadi), Joaquim Roderiguez (Katusha), Haimar Zubeldia (RadioShack-Nissan), Alejandro Valverde (Movistar) and Luis Leon Sanchez (Rabobank), add to that the new Olympic champion Alexander Vinokourov (Astana), Damiano Cunego (Lampre-ISD) and Jurgen Van Den Broeck (Lotto-Belisol) you have a recipe for a hard race over the mountains of the Basque Country. Last year’s winner Philippe Gilbert (BMC) was not starting as he is riding the Belgian National time trial championships on Wednesday before travelling to Pamplona for the start of La Vuelta a Espaсa on Saturday.

The course takes in six hard climbs in its 234 kilometres; once the race hits the finishing circuit they climb the Alto de Jaizkibel and the Alto de Arkale twice, the last time up the Arkale is 15 kilometres out and then 3 kilometres from the line the Alto Miracruz can be the decider. The date change to the Tuesday before the Vuelta looks to be popular with the teams.

The Start
Alexander Vinokourov received a framed plak to celebrate his Olympic win before the 160 starters headed out of the seaside city of San Sebastiбn/Donostia in 25єC and a light wind covering 45.2 kilometres in the first hour. Over the climb of the Alto de Garate; Nairo Alexander Quintana (Movistar) was over the top first, this launched the first move of the day putting Adrian Palomares (Andalucia) and Javier Aramandia (Caja Rural) out front, for the two to build up a lead of over 8 minutes after only 60 kilometres of racing. Through the sprint in Azpeitia it was Palomares 1st followed by Aramendi and Javier Ramirez (Andalucia) in third back in the bunch.

The two reached a lead of over 11 minutes; Katusha took the initiative and brought them back to below 9 minutes at the base of the Zumarraga climb. The race speed had settled down at an average of 38.6 kph for the third hour and after 100 kilometres the lead was back to 6 minutes.

The race lead continued to drop as Movistar started to work for 2008 Clбsica/Klasikoa winner; Alejandro Valverde, and after 123 kilometres, Palomares & Aramandia only had 5 minutes in hand coming into the last 100 kilometres.

Jaizikbel for the First Time
The race hits the 1st Cat Jaizikbel for the first ascent after around 150 kilometres and cross the summit with 77 kilometres left to race. Through the sprint in Andoain; Palomares was first again ahead of Aramandia and Ramirez was again at the head of the peloton. The lead for Palomares and Aramandia plummeted on the climb of the Jaizikbel, Movistar had the team on the front and had the escapees caught before the summit with 80 kilometres to go.

Immediately there was an attack by Nairo Quintana (Movistar) and Eros Capecchi (Liquigas-Cannondale), they were joined by Tomasz Marczynski (Vacansoleil-DCM) on the descent. By the time they got down to the valley the three had a good lead, but it wasn’t enough and they were replaced by Tiziano Dall’Antonia (Liquigas-Cannondale) who pushed his advantage to 33 seconds as a failed chase group tried to form.

1st Ascent of the Arkale
Dall’Antonia came over the top of the 2nd Cat Arkale with Marczynski (Vacansoleil-DCM), and Broco (Caja Rural) just ahead of the peloton at 54 seconds. 50 kilometres to race and Dall’Antonia & Marczynski had pushed up their lead up to nearly 1 minute, their problem was the Astana team who had started to chase behind, pulling them in.

Second Time up the Jaizikbel
Marczynski left the tiring Dall’Antonia to be caught by the bunch as Sergio Paulinho (Saxo Bank-Tankoff Bank) crossed up to the Polish rider. The bunch was being decimated by the Katusha and Astana teams, Majka replaced his Saxo/Tinkoff team mate Paulinho at the front with Marczynski.

At the top; Majka & Marcznski had 5 seconds on the counter-attacking peloton with Rabobank, Katusha and Astana all jumping about at the front with 36 kilometres to go. The order of the riders over the climb was; Marczynski, Majka, Cataldo, Valls, Henao Montoya and Txurruka.

By the valley the race had changed yet again as 5 riders had a slim lead (15 seconds), they were; Majka, Marcznski, Izagirre (Euskaltel-Euskadi), Henao Montoya (Sky) and Valls (Vacansoleil-DCM).

Through the sprint in Irun the lead was much the same at 19 seconds as Movistar put all their riders to the front of a shrunk bunch of around 20 or so riders.

Second time up the Arkale
Katusha had seen enough and now put their men on the front of the peloton, Marczynski and then Izagirre were dropped by the leaders as Henao, Majka and Valls pushed on. Valls was next to give up, leaving Henao and Majka to cross the summit just in front of the peloton which was animated by Joaquim Rodriguez (Katusha). 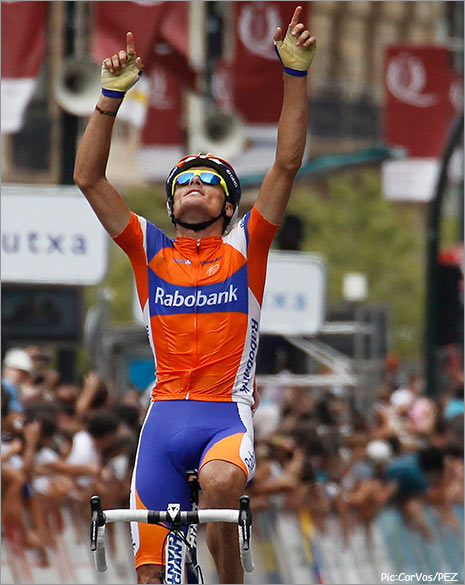 The Last 10 Kilometres
The race split on the way up the Arkale and by the bottom a lead group of about 16 had got together with another bigger group coming up from behind. As they all got together Luis Leon Sanchez (Rabobank) jumped during the lull in the action. Richie Porte (Sky) launched himself after Sanchez, to be joined by Rodriguez, Mollema (Rabobank), Valls and Santamborgio (BMC), this didn’t last and they were caught due to no Movistar riders up front. Luis Leon Sanchez had put his head down and was still 11 seconds up with 4 K’s to go.

At the top of the little rise of the Miracruz, Sanchez was making up for his disastrous Olympic TT with a 100% effort. Under the 1 kilometre banner he had 12 seconds over the non-chasing bunch. 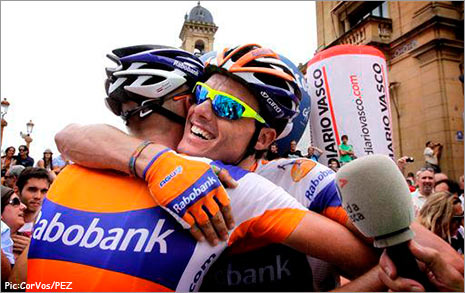 On the wide finishing straight by the sea, Luis Leon Sanchez soloed to his second San Sebastiбn win relieved that the bad luck of the Olympics didn’t hit him today. The bunch sprint went to Simon Garrans (Orica-GreenEdge) followed by Gianni Meersman (Lotto-Belisol) in third.

Keep it PEZ for the Vuelta a Espaсa starting on Saturday, full race reports and results every stage.

Toolbox: Things To Think About