Santos Tour Down Under ’12: Pre-Race Roadside

The winter’s first snow fell at PEZ HQ last night, but it’s sunny, warm, and summertime in Australia – as the 2012 Santos Tour Down Under is set to roll. PEZ is on scene and primed to bring you all the roadside action as the racing season kicks off. 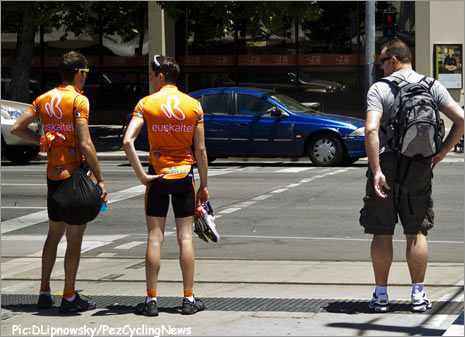 After a long 4 day road trip along the Great Ocean Road from Melbourne, I’ve finally arrived in Adelaide. To be honest, I have not heard a lot of great things about Adelaide from travelers that I have met in my 6+ months in Australia. As I walk down towards the Hilton Hotel to pick up my media credentials, I spot a McDonalds (referred to as ‘Maccas’ in Australia), and notice that it is only open to 7PM?!? Adelaide is a relatively small town, but that’s just crazy. As I get closer to the city centre, I see dozens if not hundreds of hard core cyclists riding through the city. Some pro, some clearly not pro, but wearing team kit. I’m feeling better about the city already. 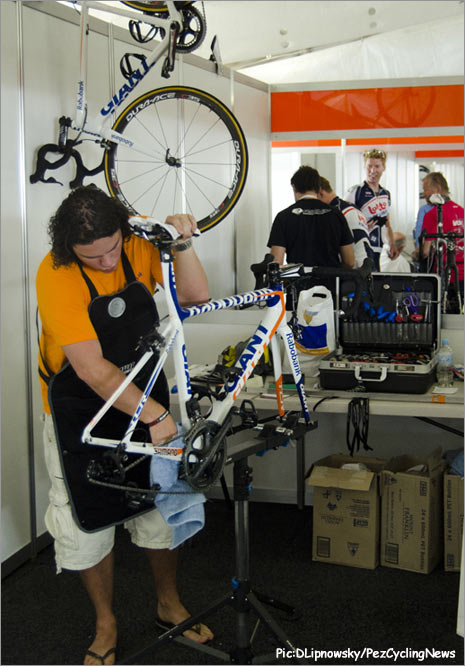 A Rabobank mechanic assembles bicycles at the Tour Village. The village has a strong, distinct smell of lube.

As I walk up the steps to the Hilton Hotel, Robbie McEwen passes me on his way out. That’s pretty cool. He is dressed in his GreenEDGE gear, and he looks pretty dark and tanned. After grabbing my media pass, and getting them to correct the typo in my last name, I attend the media conference in which The Cannibal, Eddy Merckx, spoke for about half an hour. He discussed the current state of cycling, doping, the new Green Edge team, and Australia. 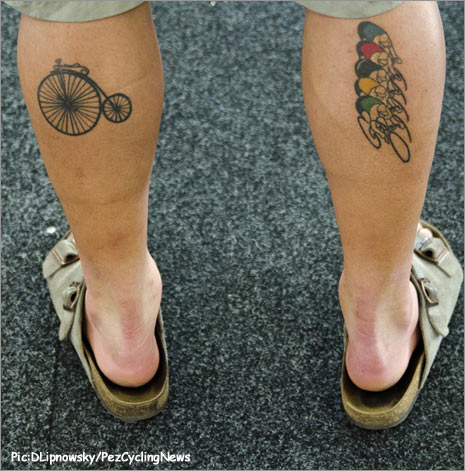 The dedication to cycling is apparent, as seen in the Tour Village.

Apparently Stuart O’Grady had invited the 66-year-old legend to attend the race. Merckx will also be riding in the BUPA challenge tour ride next Saturday, partaking in the shorter 33km ride. After the event as I wait for the elevator, I find myself standing beside the Cannibal. I figure this is probably the only time I will ever get a chance to meet him, so I introduce myself, and say “greetings from Canada, I know your son lives there, and you have been there yourself”, trying to get a conversation started. I tend to speak quickly, and he asked me to repeat myself. After saying my line again, he says, yea, and made a few noises of understanding, before turning in another direction and speaking with another person. Okay, at least I spoke to the greatest and most successful cyclist of all time, albeit briefly. 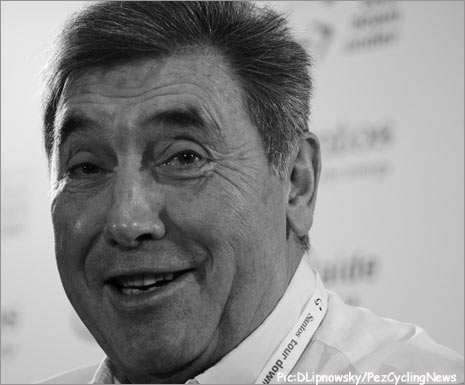 A great moment for many of us is meeting the legendary Eddy Merckx for the first time. My moment came today.

As I head back to the media room to upload the photographs, I see that broadcaster Phil Liggett is standing in the isle, blocking my way to my laptop, so I say “excuse me sir” and put the card in my computer to start uploading. Once again, I go over to and introduce myself to Phil Liggett, hoping it would go over better than my Merckx encounter. First off, that voice! Wow! So silky smooth; I was half tempted to ask him to record a voicemail message. I could hear it in my head “Hi, I’m Phil Liggett, and you have reached David’s voicemail. 300 meters to go, the pack is in a frenzy!! Please leave a message after the tone!!!” (I didn’t, but how amazing would that be). We spoke for quite a while, mostly about his experiences from covering every Tour Down Under, as well as his experiences in Canada. He seemed to be very genuine and extremely nice. At one point during our conversation, he notices that Paul Sherwen’s name is spelled wrong on his media pass. He tells his colleague that they should get it changed, and that Paul would not be happy with that. I guess there were some issues with spelling for the last names… 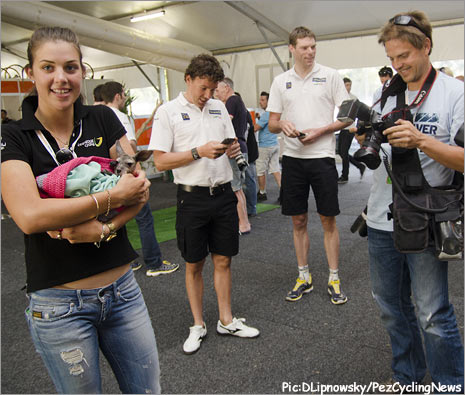 As I head back to my computer, content with my encounter, I notice that one of my cycling photography heros, Graham Watson, is sitting at the table next to mine, so I go over and once again introduce myself, going for the hat-trick of name dropping stories that none of my non-cycling friends would understand. Watson seems nice, and after a brief conversation, I tell him that I will see him around this week. He says with a laugh that I can buy him a beer later. Perhaps I will my dear Watson, perhaps I will.

Later in the day, tour riders, as well as the women’s GreenEDGE AIS team came to the Tour Village to meet some native Australian animals. This is clearly an event for photographers to get images out the day prior to the start of the racing week to promote the event. And it works, with cute koalas, baby kangaroos, and a carpet snake that most cyclists were afraid to go near. The riders were giddy with excitement to touch the cuddly creatures. 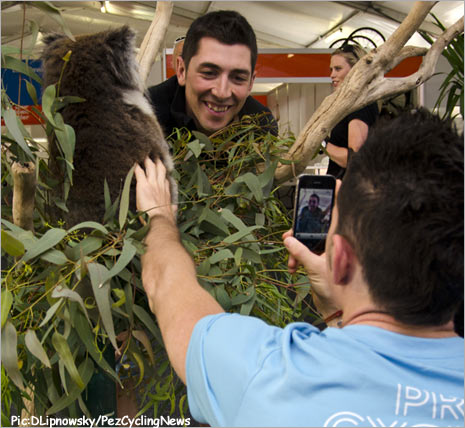 The world’s greatest cyclists took turns taking photos of each other with their cell phones holding the animals. Katusha rider, and one of cycling’s top sprinters, Уscar Freire was kept busy taking photographs of his fellow riders using their cameras. He was also asked by media photographers to pose with koalas, and baby kangaroos, but he said “no snake”. 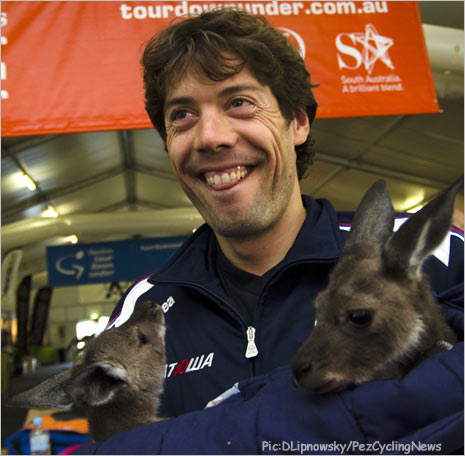 Katusha rider, and three-time World Champion, Уscar Freire gets close to a couple of baby kangaroos during an opportunity to meet native Australian animals at the Tour Village Saturday evening.

Funny enough, the ladies of GreenEDGE had the most fun playing with the snake. I felt a little sorry for the snake wrangler, who was holding the medium sized carpet snake for quite a while as there was very little interest from the male cyclists, so I took the snake off her hands for a few minutes.

Tomorrow marks the start of the week of racing with the 51KM Tour Down Under Classic held in the east end of Adelaide. Expect some exciting racing as Tour organizers expect the 30 laps of 1.7KM to be wrapped up in an hour. The race is planned to start at 7PM, which should allow the competitors to avoid the peak heat of 29C that is expected for tomorrow.

Keep it dialled to PEZ for action all week long – !