Roadside St.2: In my research into these two small towns, I found very little of interest, unless you count the Archives and Historical Museum of Lobethal as tourist attractions exciting, or that Stirling had been called the “Book Village” of South Australia. Stirling, however, was developed for Englishmen who couldn’t handle Adelaide’s hot summers. I think I’ll like this town.

Words and Photography by Dave Lipnowski

Oh wait, digging further I also found out Stirling is the wettest place in South Australia. Well the rain held off, it got as warm as 28 degrees, and a lot of the day was cloudy, yet I still managed to get a little colour. When I got out of the car at the beginning of the day, we were actually complaining how cold it was….

I arrive at the start in Lobethal to see a sea of green hats of GreenEDGE, and think that there must be a rider born, or living in this town. But this is not the case, instead GreenEDGE were handing them out to fans earlier. The first thing I notice as I walk onto the course was Phil Liggett holding a Joey (baby kangaroo) while interviewing Jens Voigt. Phil lovingly petted the Joey, as he conversed. 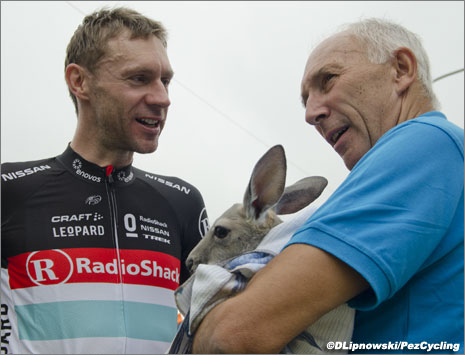 Jens Voigt and Phil Liggett chat with a baby kangaroo as the center of attention.

There did not seem to be a lot going on with the riders prior to the start of the race today. Some riders gave interviews, while Katusha riders Oscar Freire and Xavier Florencio looked over the route map, and most riders went through their usual morning routine of slathering on sunscreen. 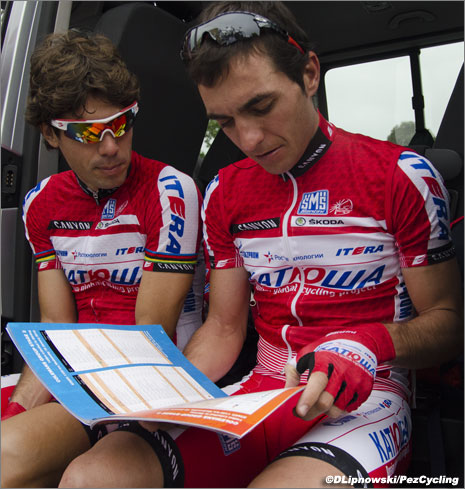 Oscar Freire and Xavier Florencio take a closer look at what’s to come.

Race leader Andre Greipel looked a little tense in my opinion (though, he does most of the time, maybe it’s a German thing), and I only saw him crack a smile once when an Astana rider went over to him and wanted to shake his hand. I’m sure Greipel is concerned about his teammate Jurgen Roelandts of Belgium who fractured his C6 vertebrae in yesterday’s stage only 800 meters from the finish line. 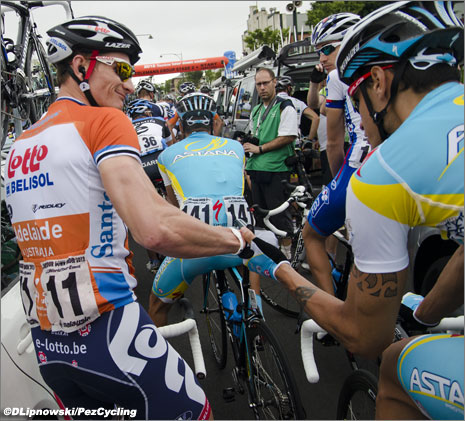 Greipel gets a congratulatory handshake from an Astana rider ahead of the stage start.

The race is off, and right from the first kilometer BMC rider Martin Kohler of Switzerland (from yesterday’s breakaway) flees the peloton with 26-year-old UniSA’s William Clarke. The two stay together for quite a while, and I manage to photograph them together at our first stop in Charleston along a scenic country road. A smaller size crowd is at this spot, and everyone there is very friendly, and is easy to talk to. I’m not really happy with the photos I’ve taken up to this point considering how nice the scenery is around these parts, and get back into the car disappointed. 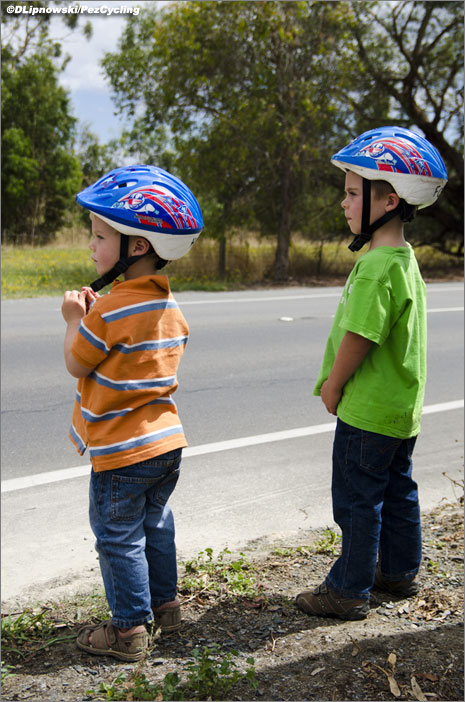 Hunter (left) and Fox watch out for the racers near Charleston, Wednesday afternoon. 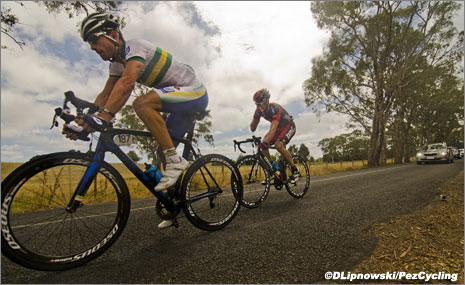 The peloton seems relaxed, and riders can be seen eating, chatting to each other, and not going very fast, allowing the breakaway group to gain time. At one point they had 12 minutes over the pack. 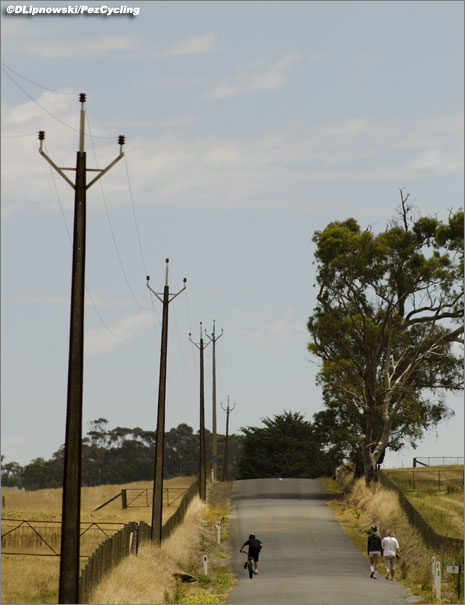 The Charleston area is hilly, and scenic; a nice place to ride a bike.

From Charleston we drive towards the finish line at Stirling, but I spot an overpass, and decide to get out of the car 2km before Stirling at a town called Aldgate, to try to shoot from atop the bridge, looking down. I always love shooting from high above the action, as it cleans up the background significantly, and you can often see interesting shadows on the road, depending on the angle of the sun.

I walk up the steep embankment and I’m the only one up there. It turns out it is a very narrow rail bridge, and I assume that there is a good reason no one else is up there, and go back down to the street. A few locals are sitting under the bridge taking shelter from the sun, and I ask them whether it is safe to be up there. They tell me a story about how someone almost died 3 years ago when a train down the tracks as they were trying to watch the race from this spot.

Okay, I guess I got out of the car too soon. I hear over a fan’s radio that the breakaway group split and William Clarke is on his own after Kohler sat up thinking that the breakaway was a futile attempt (I overheard GreenEDGE riders discussing how the breakaway group of two split). I decide to take photos from the middle of the street on the median, with the assumption that the peloton would split around the median and around me, making a nice wide, close up photo. At this point in the course, the riders are entering an 18km loop in which they go around 3 times, and then finish uphill. At the first loop Clarke comes around alone, and Kohler comes by a few minutes later, not yet caught by the peloton. 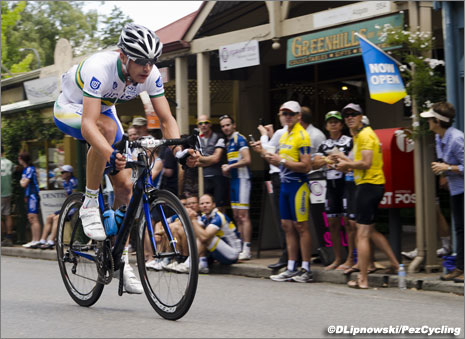 William Clarke is on his own after Kohler sat up thinking that the breakaway was a futile attempt. 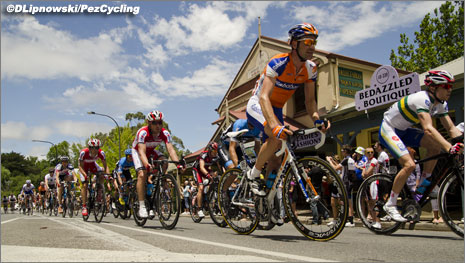 The peloton goes through the main street in Aldgate, starting to step up the pace entering loop one of three.

By the second loop, I decide to walk towards the finish line, and on my way I see two police officers atop the rail bridge, and I call up to them asking if I can join them. They let me up, and I photograph Clarke on his own yet again, as well as some peloton shots. 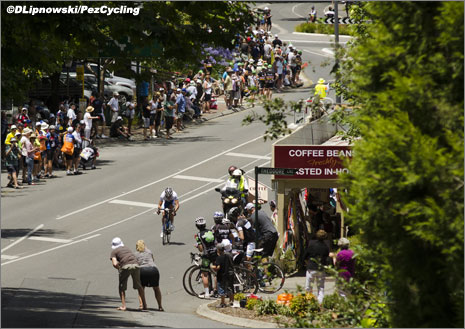 Into the second loop, William Clarke is still out on his own. 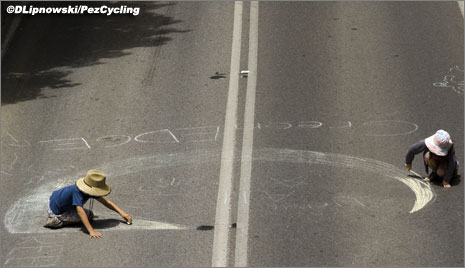 Kids use chalk to draw the GreenEDGE logo on the pavement Wednesday afternoon in Aldgate. 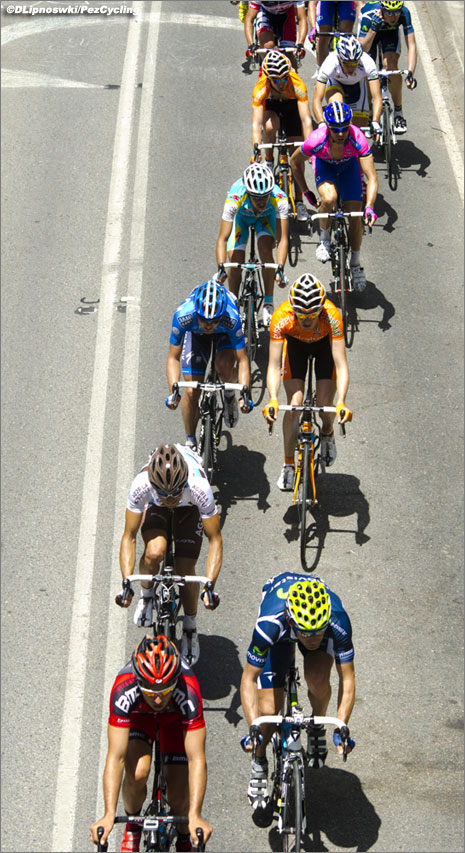 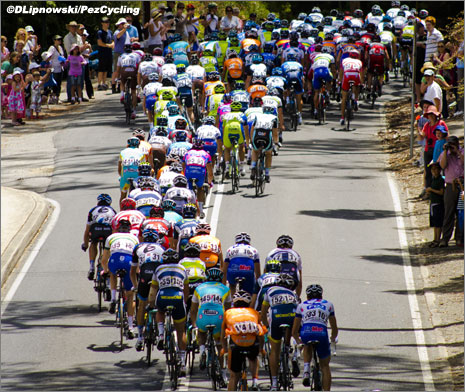 The peloton from overhead. 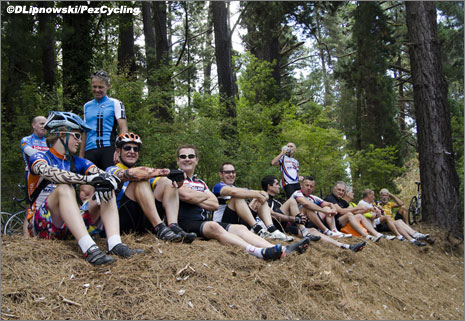 Between the breakaway and the peloton coming through the streets, hundreds of cyclists rode the race course. At times, large crowds applauded for the amateurs, and afterwards, the cyclists got to relax on the side of the road, and watch the pros in action. 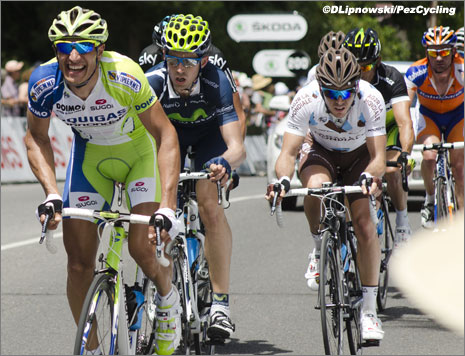 The peloton riders are hurting going into the last lap. 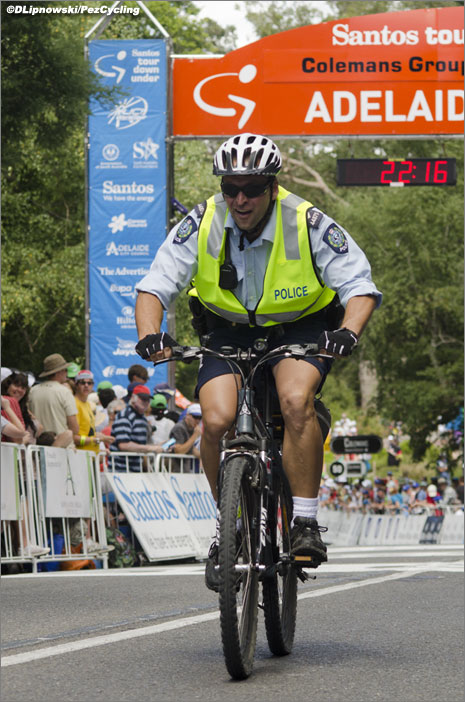 The thousands of fans that lined the final kilometer cheered on the Police as they rode past the finish line to get off the track to make way for the pros.

At the finish line, the announcer keeps the crowd updated as Clarke’s gap diminishes. I say out loud that I think Clarke can do it, and the Australian photographer beside me asks if I want to put money on it. Australians love to gamble. There are establishments everywhere where you can pretty much bet on anything. I’ve never seen anything like this before Australia, not even in Las Vegas. I’m sure the Australian on the other side of me was betting whether or not I’d make the bet. I didn’t make the bet, and I regretted that immediately as it was clear that Clarke was going to take the win. The crowd went nuts for the Australian who battled on his own for the last 90KM of the stage.

The crowd goes nuts for the Australian UniSA rider William Clarke as he approaches the finish line.

The finish line photo was pretty lackluster in my opinion, as Clarke was exhausted, and there was no celebration or smile from him. The photographers were expecting much more of a celebration after his amazing solo ride that defied the odds. 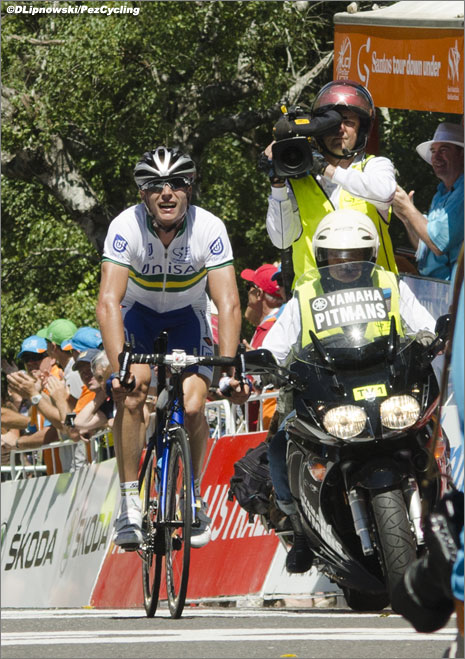 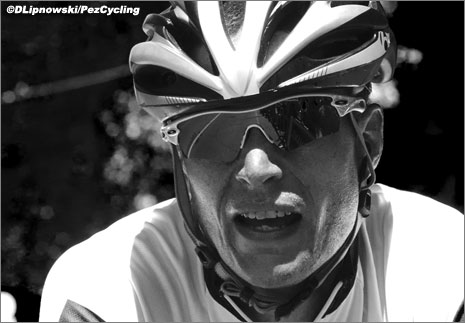 Clarke crosses the finish line exhausted from a long time on his own.

At one point in the race when Clarke had 12 minutes on the peloton, he would have been the overall race leader, but his breakaway partner, BMC’s Martin Kohler pulled on the Ochre leader’s jersey at the end of the day. When Stuart O’Grady discussed what happened during the stage, he said that “a lot of the European guys didn’t realize how strong he was”, and they were unable to pull him back.

I waited around the pathway that riders must take to go back to their team areas, hoping I would capture photos that show the agony on the faces of the riders after the uphill finish. I didn’t see anything worth taking a picture of, however, I did photograph was Lampre-ISD rider Danilo Hondo chatting up two pretty young ladies. Can you say “double daily distraction”? 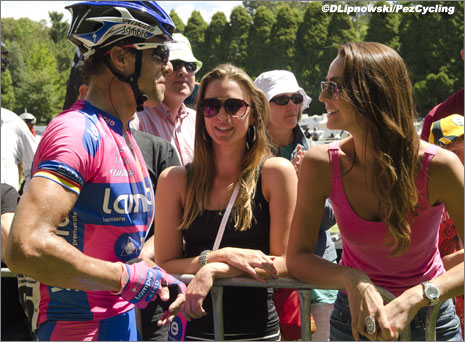 After photographing the encounter, and a shot of the girls posing for me, it was time to get closer to the podium, and I notice out of the corner of my eye stage winner William Clarke riding down the path, and all of the fans were reaching over the barricades trying to get a high five from the Tassie (Tasmania) hero of the day.

He clearly didn’t have the energy to take his hands off of his handlebars. I photographed Clarke dismounting his bike, and took my favorite photograph of the day, as he holds his head in his hand. Looking at the image, you can really feel his pain and exhaustion, and that is the story of the day. He worked hard, and he got the glory. It’s a lesson that transcends cycling, and a lesson that a lot of people tend to forget. He made Australia proud through his solo effort, and this day will likely change the course of his life and cycling career. It is stories like this that remind me why I love this sport so much. 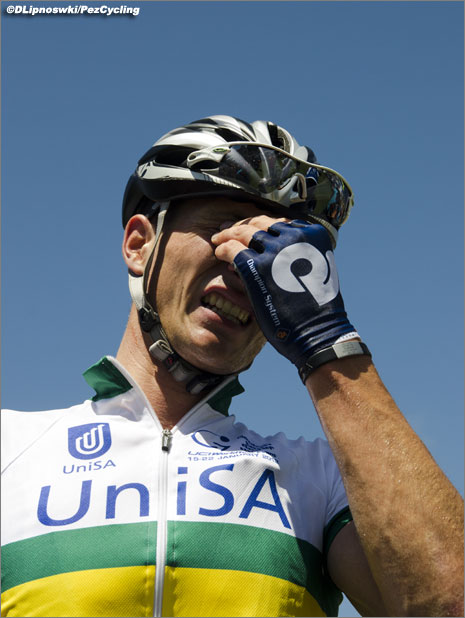 I photographed Clarke dismounting his bike, and took my favorite photograph of the day, as he holds his head in his hand. Looking at the image, you can really feel his pain and exhaustion, and that is the story of the day. He worked hard, and he got the glory. It’s a lesson that transcends cycling, and lesson that a lot of people tend to forget. He made Australia proud, and this day will likely change the course of his life and cycling career. It is stories like this that remind me why I love this sport so much.