Roadside St.5: I head into the athletes village to see a long line at the coffee machine. I don’t usually have time to check out the Tour Village in the morning, as athletes are not generally there for very long, and I need to head out to the stage start areas. There is clearly a hustle and bustle feel to the area as riders get ready for the day. It’s Stage 5, and this will be the deciding day of racing in this year’s Tour Down Under with the race’s first ever uphill finish on Old Willunga Hill.

Words and Images by David Lipnowski

Lampre-ISD rider Massimo Graziato files down his insoles for his racing shoes, and team Saxo Bank discusses strategy at a team meeting led by team manager and owner Bjarne Riis. The athletes load into team cars and drive to the start area in McLaren Vale. 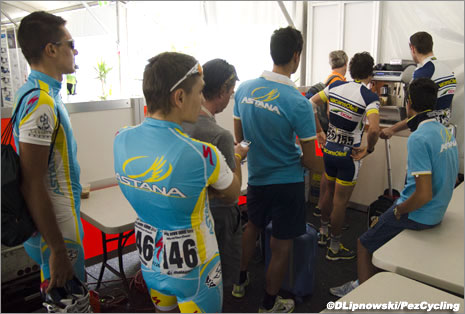 There is quite the line to get a coffee at the Tour Village Saturday morning. 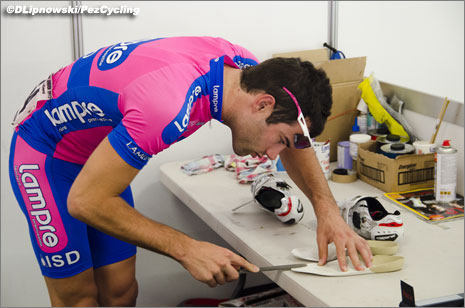 Lampre-ISD rider Massimo Graziato files down his insoles for his racing shoes at the Tour Village Saturday morning. 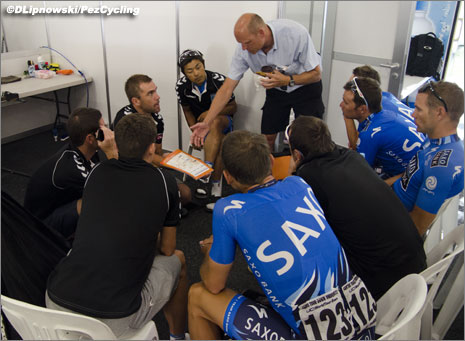 Saxo Bank holds a team meeting at the Tour Village to discuss strategy for the day. All I overheard was something about “watch out for a head wind”.

It’s the penultimate stage of The Tour Down Under, and the start area has a very different feel to it this morning. A lot of the big riders are nowhere to be found. I try and conduct interviews this morning, but the two key men I wanted to talk to, Simon Gerrans, and Alejandro Valverde have isolated themselves from the media, in their team cars. I do manage to speak with last night’s stage winner Oscar Freire, last year’s Tour Down Under champion, Cameron Meyer, and Canadian GC contender, Ryder Hesjedal.

I ask Oscar Freire about the difference between a typical night after a stage, and the night after winning a stage. He tells me: “I think you sleep better when you are happy, I think after doing a stage you have to be happy, and I think I did well yesterday so I slept also very good”. When I ask him about today’s stage, and strategy, he tells me that: “it’s a complicated final, I will try to be with the first [group] it’s not easy.”

I speak to the only Canadian riding in the 2012 Tour Down Under, Garmin-Barracuda rider, Ryder Hesjedal about his experience with the Tour Down Under and Australia. The last time he raced The Tour Down Under was back in 2009 when he finished 11th overall. I ask him if he is applying anything he learned from the 2009 race, and says: “it’s just different, there weren’t a lot of decisive moments in 2009. I think today will shake things up a little more.” When asked about Australia, he remarks: “it’s great, laid back, I’m a sun chaser, I love the sun, and to be down here in summer time in January, it’s a nice place to be, Australians are passionate for cycling”. 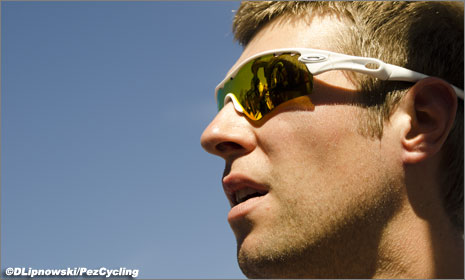 The lone Canadian riding in the 2012 Tour Down Under, Ryder Hesjedal.

Both Ryder Hesjedal and Cameron Myer tell me that they have to watch out for Alejandro Valverde, Mathew Lloyd, and Tiago Machado on Old Willunga Hill. Cameron Meyer stated that “we have to be careful about teams like Movistar sending riders away on the first climb, the first time around, but I think we have a good team here and me and Gerrans have good form, so hopefully we can play it tactically right and finish it off with a good result.”

I leave right before the gun goes off to avoid traffic on the course, and head to Aldinga Beach where the two sprints take place. On the first of three laps, the six-man breakaway group comes through led by GreenEDGE’s Stuart O’Grady. I’m really shocked that the peloton allowed the star Australian cyclist to get away. This means that all of the other teams will have to chase hard, allowing the GreenEDGE team to save themselves for attacks by Cameron Myer and Simon Gerrans later in the stage, where it really matters on the way up Old Willunga Hill. 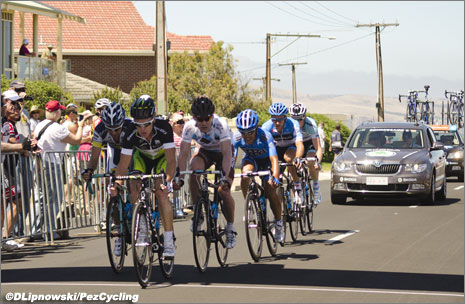 Stuart O’Grady leads the 6-man breakaway through Aldinga Beach. The peloton comes by 8 minutes later, a large gap for such an important stage with O’Grady on the loose. 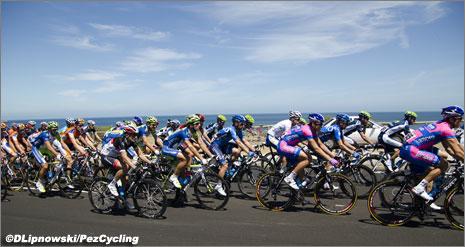 The peloton passes Aldinga Beach on their first lap.

On the second lap, I get invited up to Ray and Val Stanley’s property overlooking the Ocean. They are having a get-together with friends on their balcony and they kindly give me a refreshing glass of sparkling mineral water and some snacks. Australians are so friendly! While we wait for the cyclists to come down the ocean side road, we chat about similarities to our two countries, and they are shocked to hear that my hometown city of Winnipeg is currently experiencing temperatures in the -30C range. Hahaha, Winnipeg! 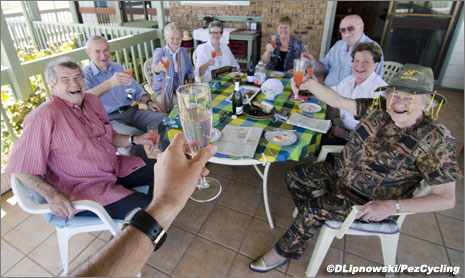 Cheers to new friends, as Ray and Van Stanley invite me to watch a part of the race with their friends from their balcony overlooking the beautiful Aldinga Beach. 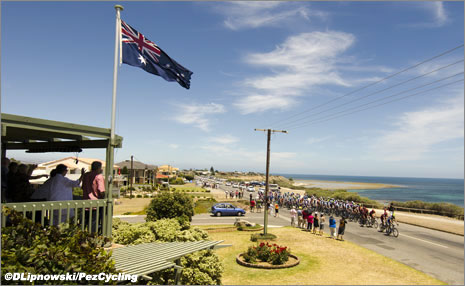 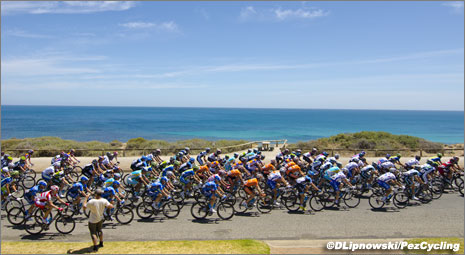 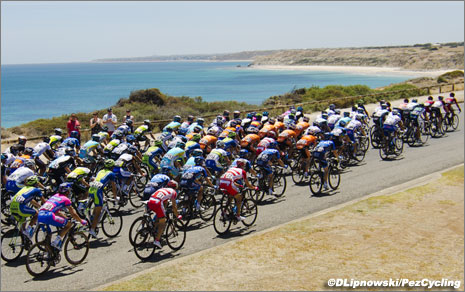 I’m very thankful to Ray and Val Stanley for inviting me up to watch the race go by. The view is incredible!

We get to Old Willunga Hill, and the place is packed. There are bicycles and people everywhere! It’s nuts! 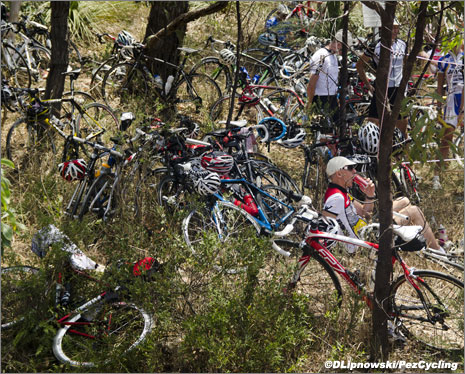 There are bicycles everywhere! 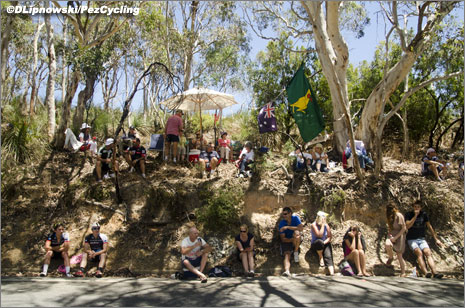 People line the road up to Old Willunga Hill during stage 5. 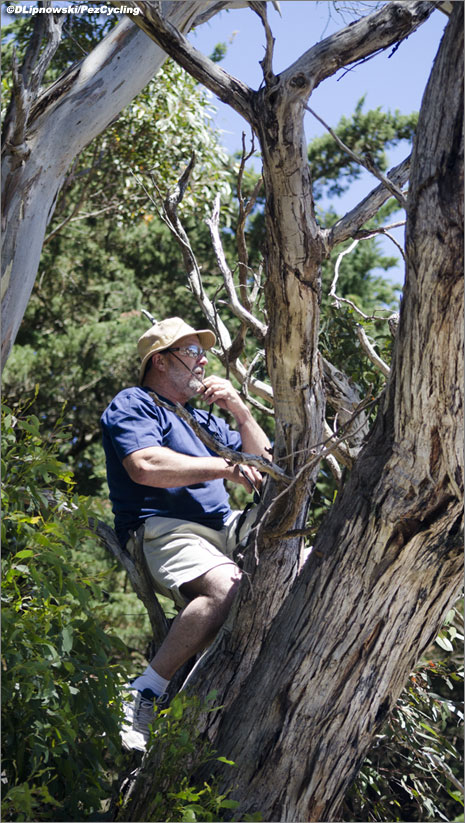 Sometimes you have to climb a tree to see the bike race.

There are people up in trees, having climbed up to try to get a good view of the race. The atmosphere is absolutely electric. The best way to describe the feeling, is EPIC. There are loudspeakers hanging on trees blasting pop music to get people pumped. It’s working. The hill is a giant party. There are BBQ’s going everywhere, and everyone seems to be having a great time. 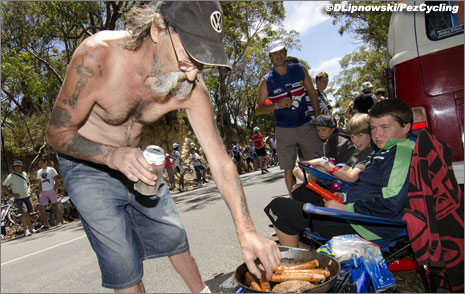 Greg Bryben checks on the meat on Old Willunga Hill during stage 5 of the Tour Down Under.

There are all sorts of crazy characters lining the route up the hill. There are people that have been sitting on the side of the road drinking for the last couple of hours in the sun, guys dressed in those skin tight suits in every colour, and your run of the mill crazies. Hundreds of bicycle racing teams, clubs, and families also line the street, making for an interesting mix of people. There is a group of young guys wearing wigs and women’s dresses. They are running around with bullhorns, waving giant pink flags, and getting the crowd going with the age old chant, “ole, ole, ole, ole”. The guys take turns at the beer bong, which they have craftily made out of a vuvuzela. When they are not taking hits of beer out of it, they are blowing it at anyone that rides up the road past them. They are also drawing a lot of attention and warnings from the police to behave when the race comes by. 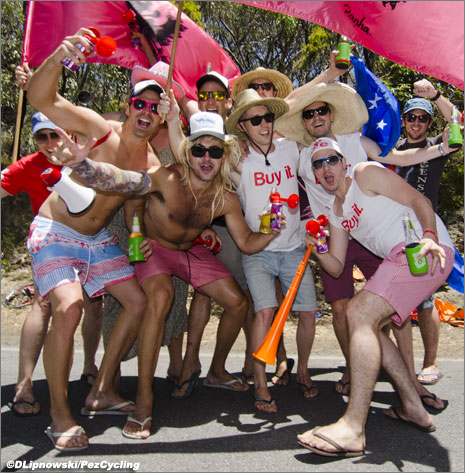 These guys were a little crazy, but were a ton of fun. 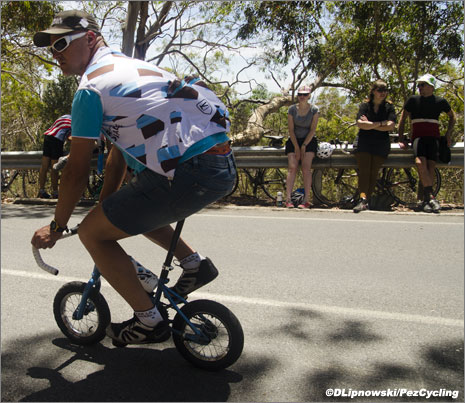 The Tour attracts all types of fans.

On the first lap of the hill, Australian Garmin-Barracuda rider Nathan Hass is flying solo, and ahead of the next group of riders by quite some time. Even though police warned rowdy fans to stay off the road, everyone jumps forward, and they try to get as close as they can to the riders. Most people give the riders space, but three young guys are pulled off the street by police officers after they ran in the middle of the road chasing the riders (much like you see in the mountains during Le Tour de France every year). 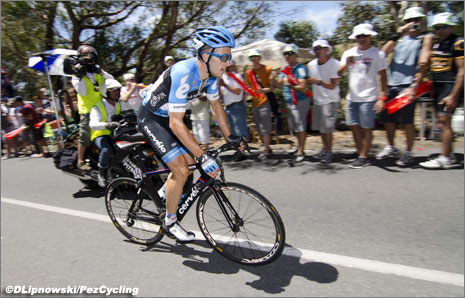 Australian Garmin-Barracuda rider Nathan Hass shoots up Old Willunga Hill first during stage 5 of the Tour Down Under. 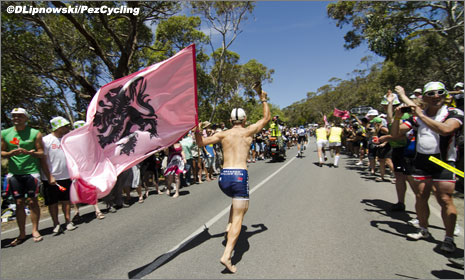 This guy got into some trouble with the coppers after running after Nathan Haas on the hill climb. 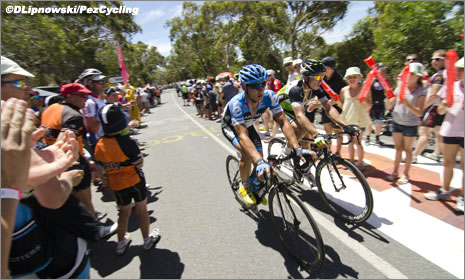 Small groups come up the hill prior to the extremely fragmented peloton. 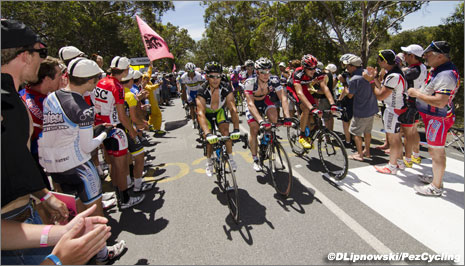 (L-R) Robbie McEwen, Andre Greipel, and Marcus Burghardt ride 3 across as they lead what is left of the peloton up Old Willunga Hill Saturday afternoon.

After the splintered peloton comes through, I walk up the course to my finish line spot, which for a change, is further back from the finish line. This would be good for a bunch sprint, but not so great for a single breakaway rider. I have a very good, albeit far, view of the finish from my position standing on the course, and the massive crowd goes wild as Alejandro Valverde and Simon Gerrans appear in my frame after coming around the last corner into the straight away. They are neck and neck as they get closer, and I have no idea who has won the sprint when they come over the line. All of a sudden Valverde throws up his left arm in the air in celebration. I continue shooting riders coming across the finish line, hoping to snap a big star with a facial expression that describes the painful uphill finish. I’m not sure why I’m doing this though, as I should probably be looking for Valverde as he gets off his bike. 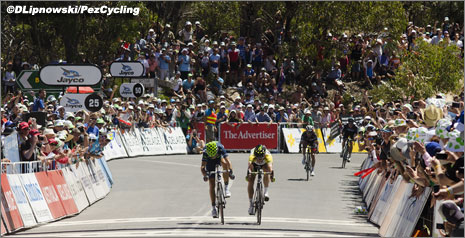 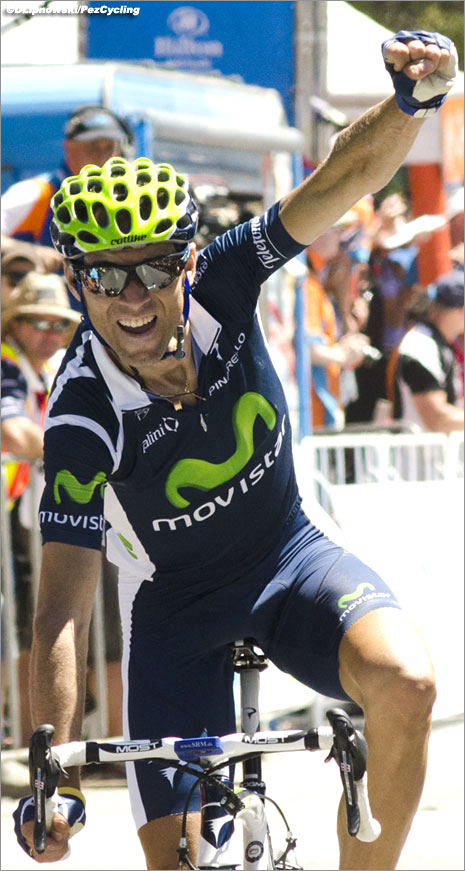 I find that the best photos are often taken before or after an event. My timing works out as I see the new stage winner embracing teammates as they roll up to congratulate him. I take one of my favourite photos of the day, as Valverde looks up to the sky in disbelief and appreciation. My other favourite photo of the day happens seconds later as he is being interviewed in Spanish. I manage to get shots of him as he wipes tears from his eyes. He is very emotional, and has won the stage after coming straight off of a two-year (backdated) suspension from racing, after being implicated for doping; he still claims his innocence. 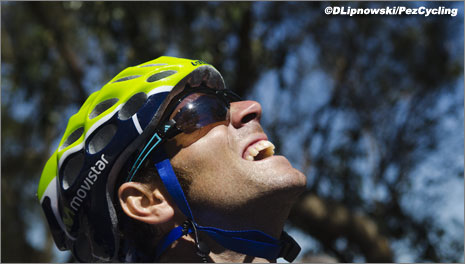 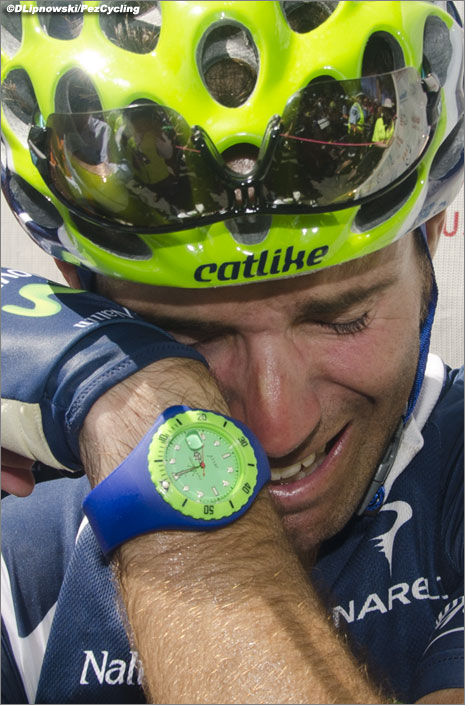 Alejandro Valverde is emotional after edging out Simon Gerrans at the finish line to win stage 5 of the Tour Down Under. This is his first win since coming off of a two-year doping suspension.

Walking back to the media vehicle for a lift home, I spot Alejandro Valverde cracking open a beer. I grab some shots of him enjoying it, as a UCI official sticks his hand in front of my camera, demanding that I delete the pictures I just took. I politely ask why, and I am informed that Valverde is in the doping control area, and no photos can be taken (even though I am in a public area). It’s a shame I can’t show you these photos, as I really like them. As I chat to other photographers about this encounter, they tell me the beer might be celebratory, but that it is also necessary to complete the dope test.

Simon Gerrans moves into the Ochre Jersey as the Tour Down Under goes into the final 90KM day tomorrow. Can he hold onto it, as the sprinters try to grab points in the criterium race around Adelaide’s west side?