Tirreno Adriatico 2012 St. 7: Three riders in less than ten seconds starting for the final stage: an individual time trial. The dish of the day is quite interesting but my plan is just to enjoy a day at Tirreno Adriatico: a full immersion in cycling and the first warm sun of the season. And that’s how it was… 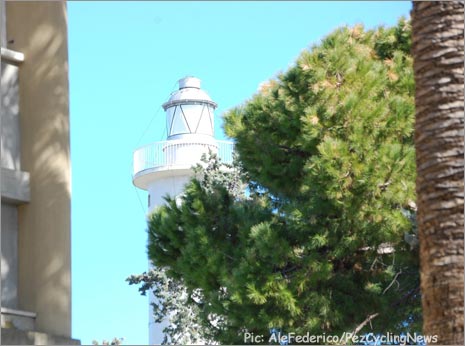 San Benedetto lighthouse. The race starts from the port area. 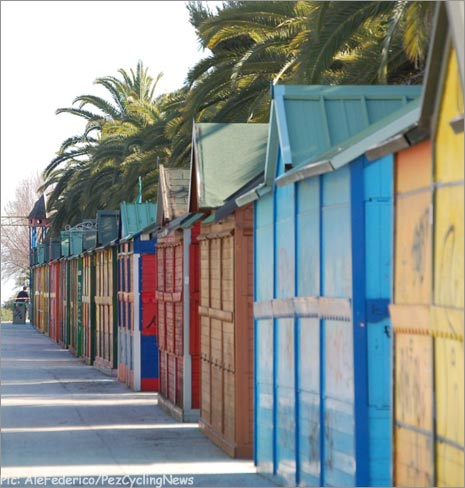 The sadness of the winter at the seaside.

San Benedetto del Tronto is a seaside town in the southern area of the Marche region. It’s famous for the long roads covered by palms and for the Russian girls populating it’s beach during the summer time. Nowadays you can find Russians in every town of the Adriatic coast, but San Benedetto was the first and remains on the entry of the people. 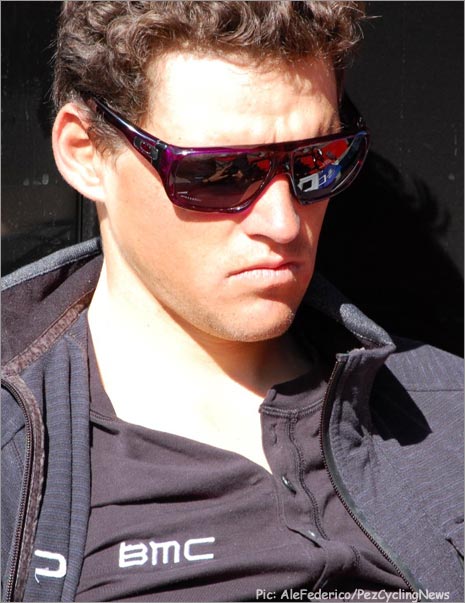 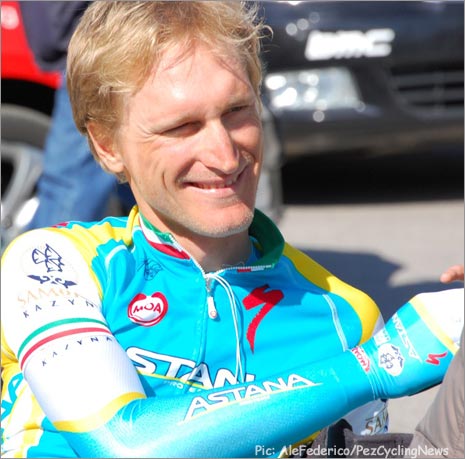 The beach now is empty and so I have no chance to verify about the girls but, yes, the palms are there and seem to be many, so I believe there should be something true also about girls. Anyway, at this time, as any other seaside location, San Benedetto seems to be empty and little bit sad, but luckily today the cycling stars are going to show their best on this town’s roads. 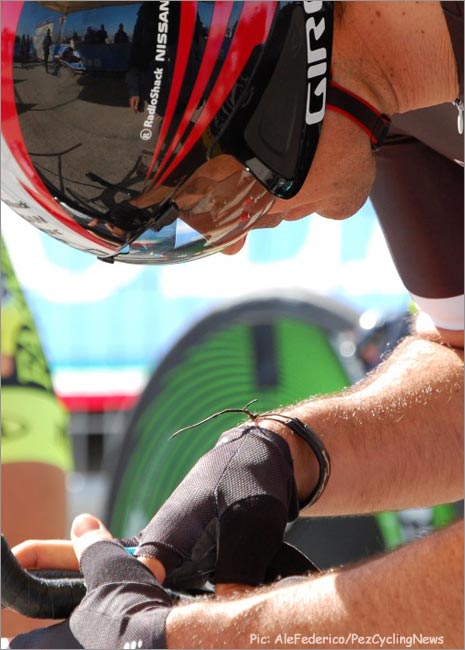 This town is one of my “must to see” locations concerning cycling: it’s the traditional finish of the Tirreno Adriatico and I always remember the time when I was a boy watching the TV and dreaming to be here. So, finally I’m here and it’s already a good reason for a trip. If someone would ask me why I never come earlier since the time I moved my location from north Italy to Marche region I could not respond. Sometimes life is really strange! 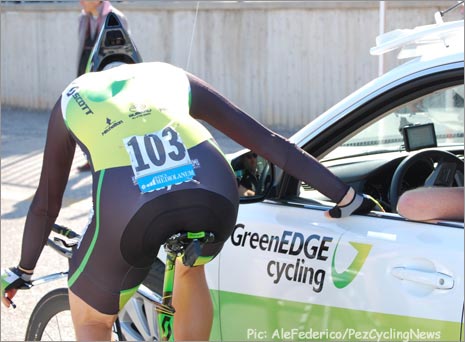 In the queue for the start.

When I come to the villaggio already most of the riders are preparing for their exercise. Who finished the competition and who’s going to be the next. The departure and finish are very close and there’s a heavy traffic of cars, bikes, riders and spectators. Not many as it happens for the big events such as Giro d’Italia but really very competent. Most of them are with their bikes and are more interested to the bikes and the gear than the riders. 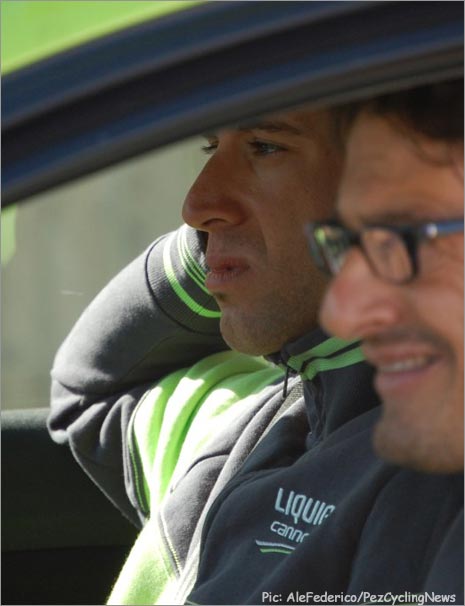 Nibali is going to discover the route chasing a teammate.

My plan is to find a team car giving me the chance to chase a rider and to watch the route. I come to the departure and I start to ask. Someone cannot because of the sponsor, someone else because of the insurance. Through the cars I also discover the Liquigas one transporting Nibali, the third in overall classification who’s going to chek out the route following a teammate. 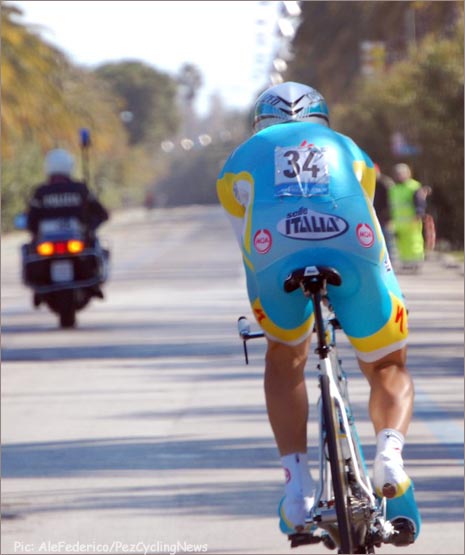 I’m ready to give up when I find an Astana car giving me the chance I was looking for. I’m going to chase Gasparotto. He is not a specialist but who cares? It’s anyway terrific be there. The car follows the rider and after a couple of bends the road is straight developing on the seaside with hundreds of palms on both sides. 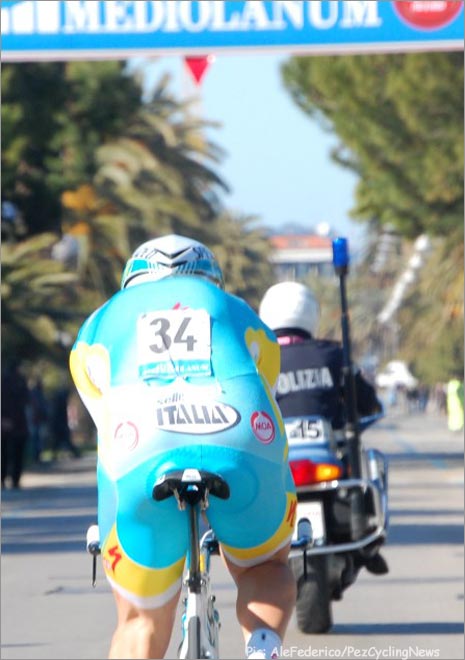 Gasparotto is pushing hard and the tachometer register 55 km/h. The wind is coming from behind, helping the rider and the driver tells me he will drive far away from the rider to allow as much wind as possible on Gasparotto’s back. The route is quite easy, 5km southbound and 5 km northbound. Just two, three bends at departure and one more to change direction at half way. 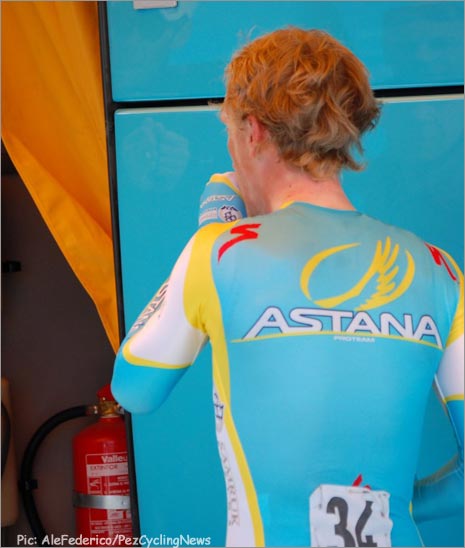 Exhausted by the race. 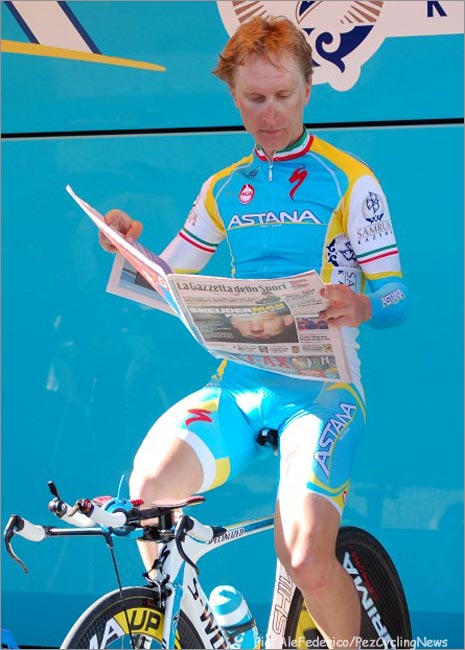 But recovered fast after the effort.

When Gasparotto completes the race he seems quite exhausted but he also recover quite fast and after a couple of minutes he comes again on the training bike to slow down correctly. I thank the Astana driver and I move back to watch the favourites. 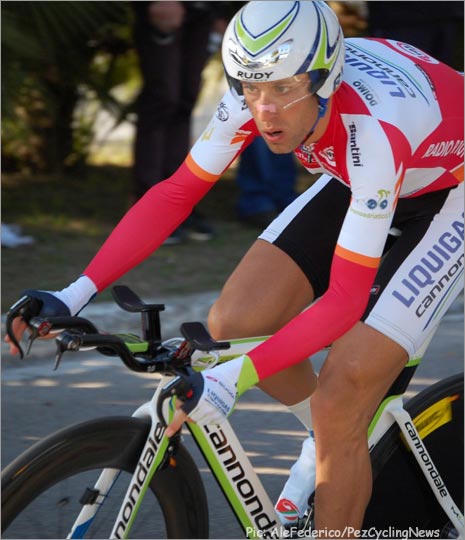 Nibali on his way to victory. 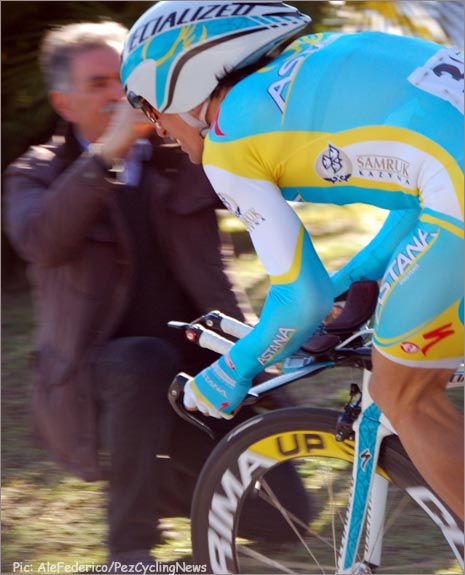 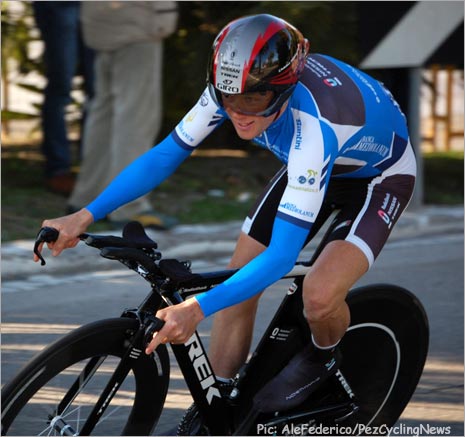 I come to one of the bends in the first part of the race. Three riders within ten seconds: comes Nibali, then Kreuziger and Horner with the leader blue jersey. The speaker announces Nibali has got the best time at half way. 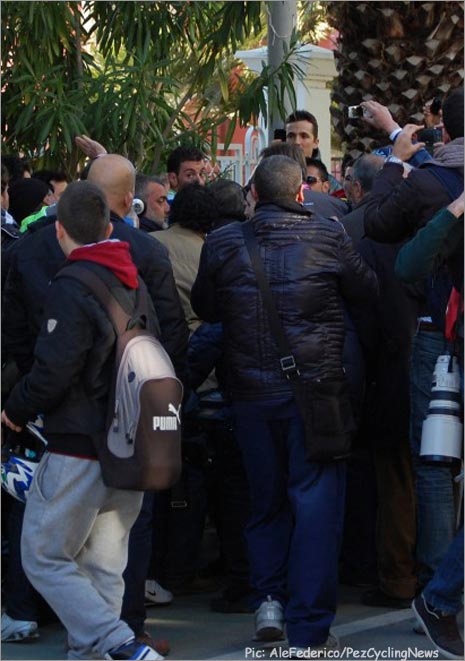 I move to the finish area, which is close and the people are already there waiting the best riders. When Nibali comes he is surrounded by a crowd. He moves a little back to the finish but everybody is stopping him. Photographers want him to wait there for the last riders to watch his reaction to the final verdict of the time. 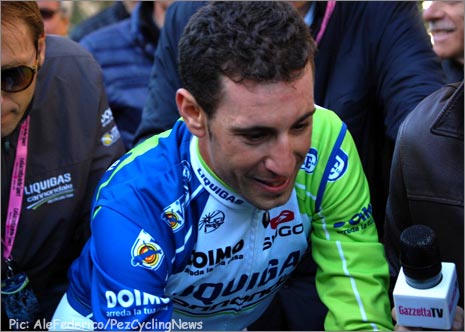 Kreuziger arrives, and seems exhausted, but he is out. The last one, Horner seems to be in delay and once he passes the finish all the officials claim the victory for Nibali: he just smiles, and passes ahead to the protected area. Horner doesn’t stop and proceeds staright to the bus area; he already knows he has lost the race. The helicopter is roving above us and the speaker calls everybody to the podium. But I have to go. A trip is waiting for me and I have enough of a great cycling day. 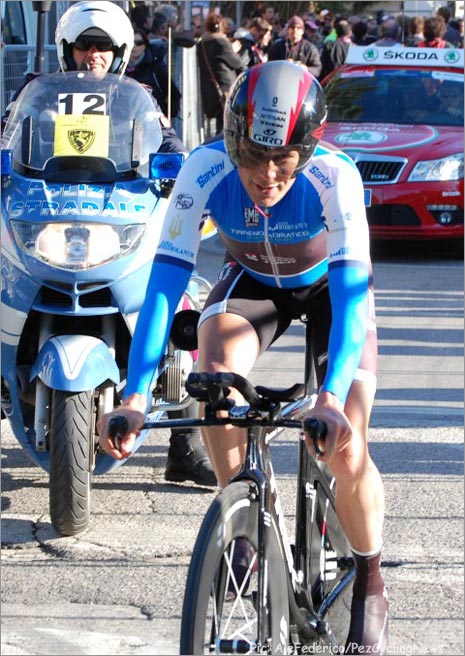 Horner arrives after the finish. 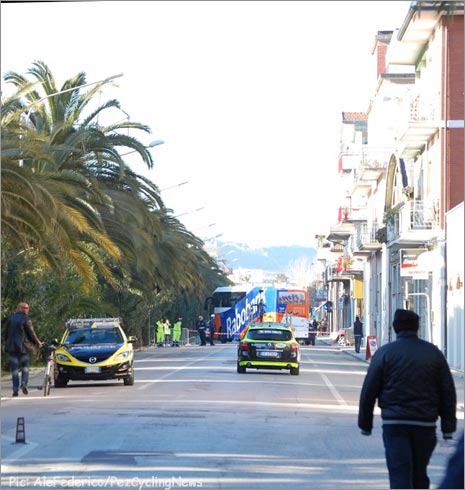 While I leave most of the teams are leaving. The town comes back to the last winter days and all the riders in the cars transporting them to home or the nearest airport are already with their minds to Sanremo. Other sea, other palms. I never heard of Russian girls in Sanremo, but well, this is another story.