Tour of Utah: Setting the Stage for the Most Difficult Race in the US

After three days, the Tour of Utah is quietly living up to its billing as the most difficult stage race in the US. Unlike its American cousins in California and Colorado, the Tour of Utah wasted no time in getting down to business with a first stage that saw nearly 9,000 feet of climbing and four King of the Mountains (KOM) summits. 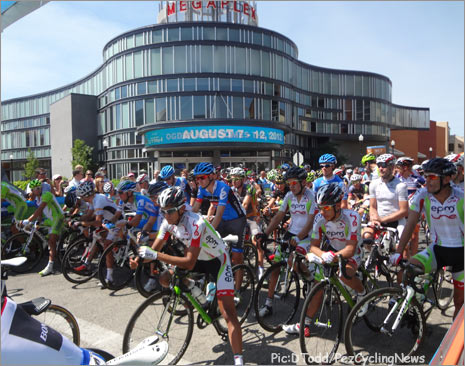 The bunch lines up for the start of stage 3.

In what has now become traditional Tour of Utah fashion, Jesse Anthony (Optimum-Kelly Benefit Strategies) jumped with 35 miles to the finish in order to chase the break led by William Clarke (Champion System) and David Williams (Competitive Cyclist). The opening stage of 131.6 miles ended with a reduced bunch sprint following the implosion of the peloton on the final KOM up the North Odgen Divide. 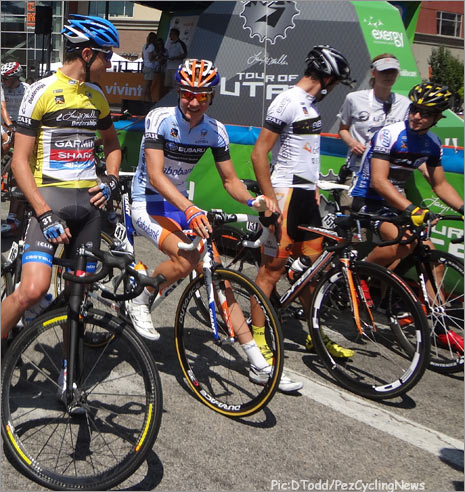 If CG contenders were hoping for some sort of reprieve in the stage 2 team time trial (TTT) after one of longest days of the Tour, they were sadly mistaken. The 13 mile technical course through the Miller Motorsports Park claimed the first GC victim of the Tour when Francesco Chicchi (Omega Pharma-Quick Step) fell off the train and missed the time cut. Down to only five riders (the minimum needed to finish), Omega Pharma-Quick Step was forced to slow its pace so that a struggling Jeroen Hoorne did not get dropped. As a result, 2011 winner and pre-race favorite Levi Leipheimer lost over two minutes on the GC thereby virtually extinguishing his chances at a repeat. As anticipated, the stage went to TTT juggernauts Garmin-Sharp and with it the yellow jersey for Christian Vande Velde

There’s No Air Up Here!
The major story is likely how the conditions are playing havoc with the team. Levi lost a teammate in the TTT and then another today after getting dropped on the last climb and getting pulled for taking a car pull. Omega is now down to 4 riders and Levi is already too far behind to make up the ground. This morning he explained that the many of the riders underestimated the course and were shocked at the intensity of the heat coupled with the severity of the altitude in the just the first 3 stages. For example, reportedly the EPM UNE so underestimated the amount of climbing that they did not bring cassettes larger than a 25. They had to go into Salt Lake and buy 28t cassettes. This was also true riders from other teams. 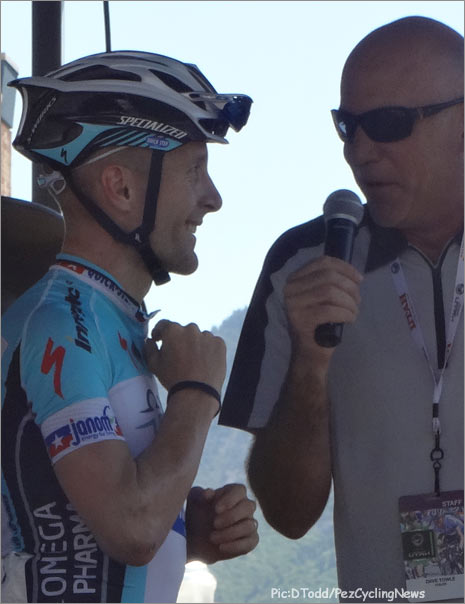 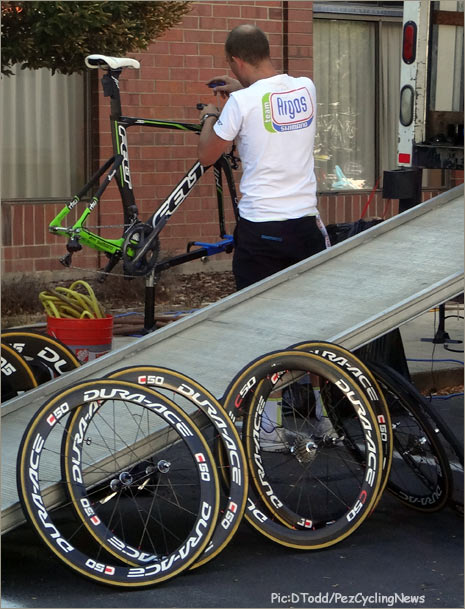 Choosing the right cassettes for the climbs was a key issue at this altitude.

A break by accident
At the start of Stage 3 several riders discussed their anticipation for an early break which they believed would happen almost immediately from the start. However, the “from the gun” attack never materialized as the peloton seemed to roll almost noncommittally over the first KOM of the day, a category 2 climb the North Ogden Divide. Despite the lack of aggression, several riders got into immediate trouble on the climb. Matt Brammeier (BMC), Tom Slagter (Rabobank), and Jonas Ahlstrand (Argos-Shimano) were pulled from the race for taking a pull from team cars. The pulls were so severe that Rabobank and Argos-Shimano have been penalized the use of one team car for the remainder of the race. The descent proved a perfect time for a break as Garmin was attempting to regroup from a climb that took more out of the peloton than anyone expected. 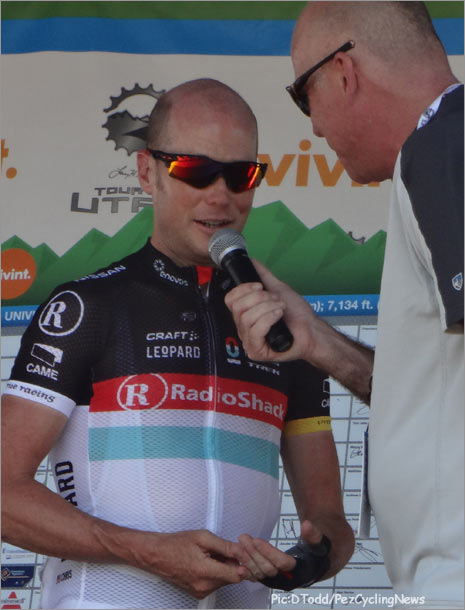 GC favorite Horner was among the many who opined that Stage 3 would start with fireworks. 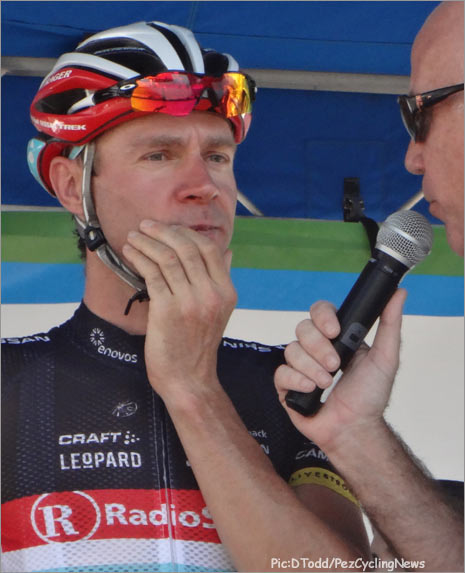 Always a fan favorite, Jens Voigt ponders a question that is no doubt a Dave Towle classic.

A break finally went when Timmy Duggan (Liqugas-Cannondale) commenced a move at the bottom of the descent. Duggan stated, “there wasn’t really a plan A to be in the break away but I was there and it didn’t take a lot of effort to get in the break.” The attack was followed by Michael Matthews (Rabobank), Johann Tschopp (BMC), Thomas Rohregger (RadioShack-Nissan) and Philip Deignan (UnitedHealthcare). The extent to which the climate had taken its toll on the peloton was evidenced by Duggan’s explanation of how the break occurred in the first place. “We just rolled through and kept the momentum going and got a little group going without much effort.” 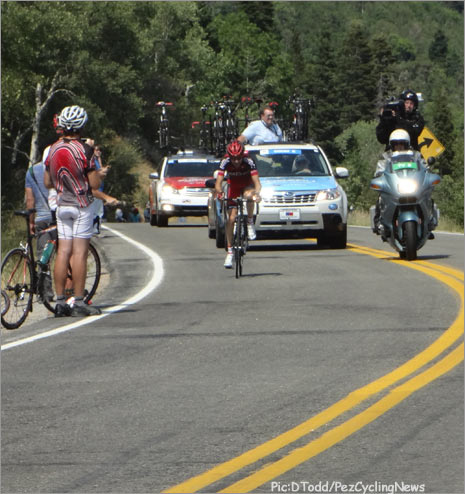 Johann Tschopp leads the way over the final climb.

The break could never attain a significant gap and was eventually caught, but not before Duggan secured max points on the second KOM, a category 3 climb up Trapper’s Loop. Garmin-Sharp notched up the pace and quickly reeled back the time as the peloton assaulted the crest of the final KOM, a category 2 twisting assent up Big Mountain. 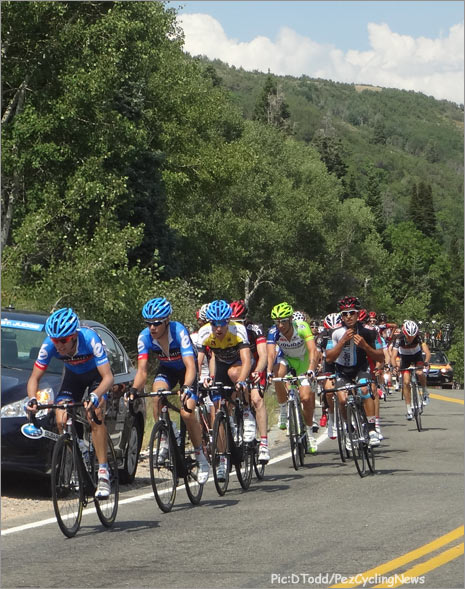 Garmin-Sharp takes control of the chase.

Duggan and Tschopp seeing that their group was finally cracking, attempted to set out on their own. Duggan eventually faltered and Tschopp found himself cresting Big Mountain with nearly a minute lead on the peloton.

A day for the “slash” riders
Tschopp’s lead quickly faded as a result of Garmin-Sharp’s pace and dropped to 20 seconds on the final remnants of the descent. Once the course flattened, Tschopp was caught less than 7 miles from the finish. The race began to take shape for the sprinters in a peloton that had been thinned to only about 50 riders. Matthews, having stayed near the front of the pack after being swallowed up on the final climb used his remaining power to position himself for the sprint. Without teammates, Matthews was forced to look to other rider’s wheels to set up the sprint. “I tried to follow (Freddie) Rodriguez, because I heard he’s a pretty good sprinter.” He said. After losing a couple of positions in the pack, Matthews took the wheel of Rory Sutherland, and started his sprint at 200 meters to take the win. Vande Velde maintained his hold on the yellow jersey with smart tactical riding by the Argyle boys.

In the post race press conference both Duggan and Matthews acknowledged that today’s stage was a race for the climbers- slash- sprinters. While stating that he did not have a very good tactical race, he did acknowledge that he specifically tabbed today’s stage as one that suited his abilities in both climbing and sprinting. After coming up short earlier this year at the Tour of California, Matthews explained that his realistic ambitions were set for stages 3 and 4 due to their moderate climbs and potential for sprint finishes.

The calm before the storm
Stage 4, a 134.3 mile rolling jaunt through Lehi and West Valley City offers a mostly rolling course where sprint points will be the favor of the day. Following Stage 4, the race will get very serious as the Queen stage looms through Little Cottonwood Canyon and its HC climb up the Snowbird Ski Resort. The race will conclude in similar fashion on Sunday with one final beyond category KOM up Empire Pass en route to the finish in Park City. The significant number of climbs in the final days means that race organizers have thrown down the gauntlet on whether the Tour of Utah really is the most difficult stage race in the country.

• Stay tuned for more as we ride along with Team Competitive Cyclist on Stage 4.

A Rider On The Rise: Sam Spokes