Saturday’s Queen Stage promised to be a memorable for several reasons. While the anticipation of the fire works that would take place up the 4 KOMS had my attention, I was especially excited because I would be experiencing the stage from inside the team car for the Champion System cycling team.

Although the Champion System team is only a couple of years old, they have quickly established a reputation developing its riders into aggressive racers, due in no small part to General Manager Ed Beamon. Aside from being the first Pro-Continental squad based in Asia, the team is comprised of riders from several countries and seeks to incorporate a global view of cycling in much the same way its title sponsor does in its business model. Champion System is one of the most prevalent manufactures of custom cycling clothing in North America, despite the fact that they are based in Asia. In many ways, the team is an extension of the values and goals of the company. I was looking forward to my day with the team.

I arrived just in time to catch the team’s morning meeting. The strategy for the day, work to get Chris Bulter, the team’s best climber, into a good position for him to make the final selection on the final climb up Snow Bird. Prior to today, the team encountered mixed fortunes at the Tour of Utah. The team had raced well, placing a rider in the main break for each of the road stages. However, they suffered setbacks losing three riders including two in the team time trial and one the following day. As a result, the team were going to need to really depend on each other now that their ranks were depleted. 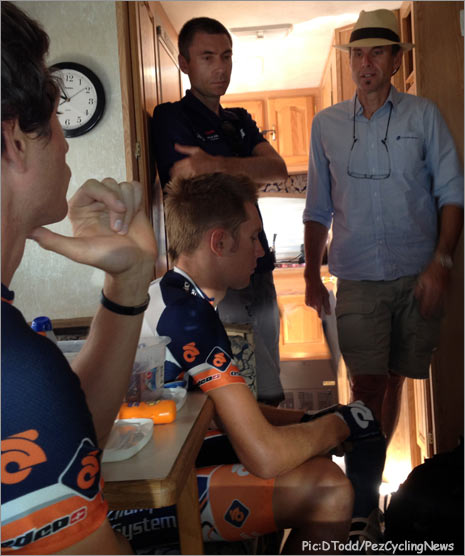 Ed discusses the ins and outs of the course.

After Ed hands out the marching orders, its time for the translator to step in. Zhe Shi, affectionately referred to by the team as Sharon, translates the directives to Xu Gang, the last remaining Asian rider on the team at the tour. Once the translation is finished and everybody understands their role, it’s time for the riders to sign in. 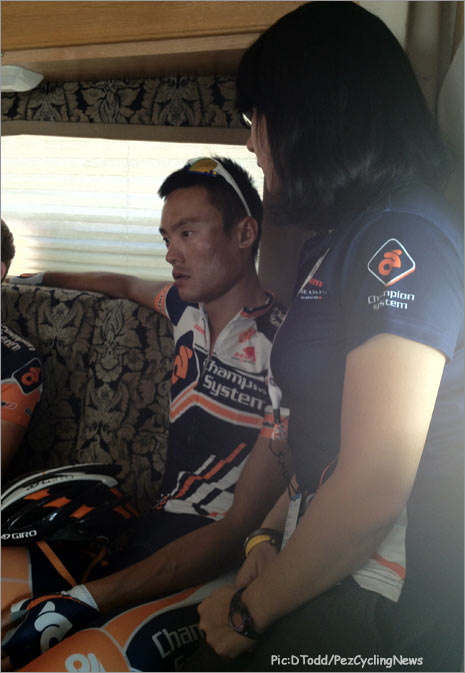 The bond the team has formed despite the culture and language barriers is immediately noticeable. Sharon, who had previously experience as translator for other teams prior to joining Champion System, explained that the camaraderie the riders share in addition to the sincerity which with they are attempting to understand each other’s cultures. Cameron Wurf, one of the team’s Australian riders, perhaps summed it up best. “For me personally, sport is greatest leveler in the world, across cultures, across genders… whatever.” Wurf stated, “You put a bunch of people on a sporting field, and all of a sudden you’ve all got the same uniform, there’s no one up here there’s no one down here we are all a team.”

With the pre-race housekeeping finally complete, it was time to hop in the car. I was assigned to the first team car with Ed, mechanic Dan Horndasch and Sporting Director Burke Swindlehurst. Dan, is a full time wrench for Team Jelly Belly but was brought on board specifically for the Tour of Utah. Like all team mechanics, Dan has a specific system in place for everything from remembering which spare bikes can fit which riders to keeping track of the time gaps for each break away no matter how futile it might be. 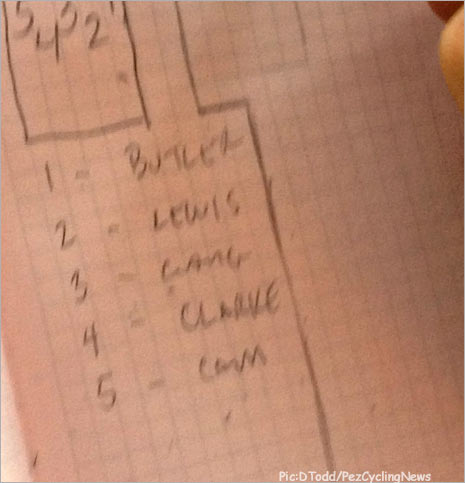 Dan keeping detailed notes on the race and how it is unfolding.

As a complete neo to what goes on in the team car, I was anxiously waiting to observe my first feed, mechanical, hairpin turn and perhaps even a sticky bottle up close and in person. I didn’t have to wait long. 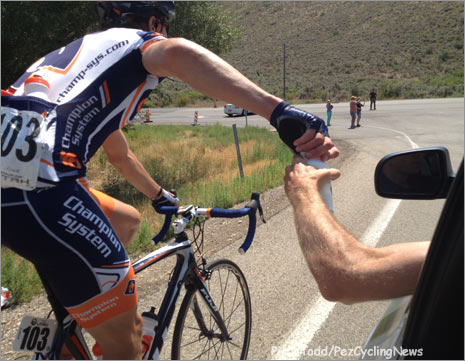 The first drama of the day occurred before the first climb when what was erroneously relayed to the team car as a feed turned into a somewhat chaotic wheel change after a flat. Without knowing of the flat a head of time, the team was caught somewhat unprepared when they reached the rider, resulting in a nearly 45 second wheel change. To the unknowing, a 45 second change seems like an efficient endeavor. To a General Manager and experienced mechanic however, it was a cluster. Dan was so upset with himself for the time it was taking to perform the change that it still grated on him 3 hours after it occurred. 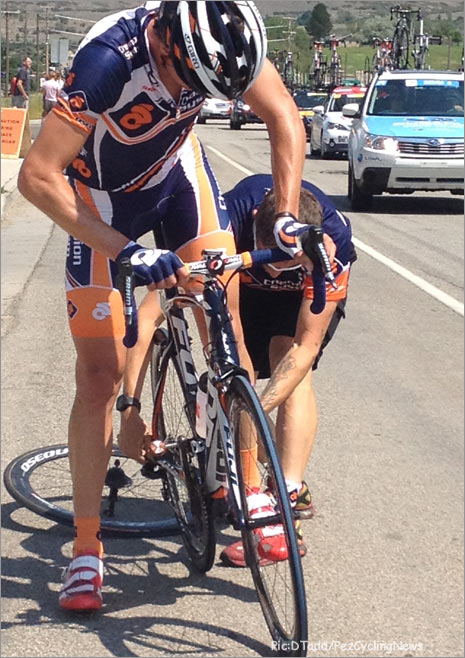 Dan struggles to get the rear wheel off. Once back in the car, it was noticed by all that in addition to the flat, there was also a broken spoke that likely caused the fiasco in the first place. 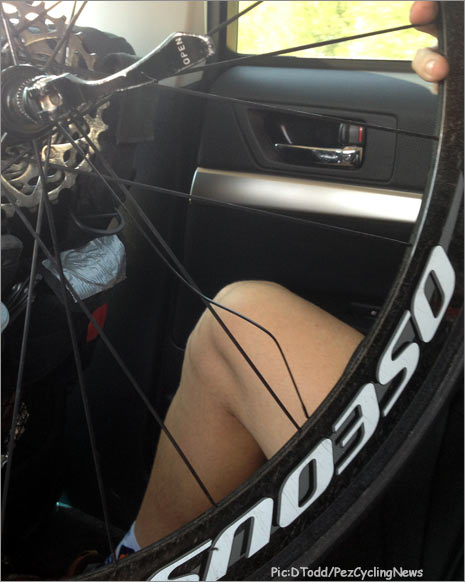 After getting back on the road, I was able to pick Ed’s brain about his team as well as the race in general. Ed explained how getting invited to both the Tour of Utah and the Pro Cycling Challenge was a bit of a surprise considering the team’s relatively young age. While Ed is trying to explain he keeps getting interrupted by the radio car constantly calling back gap times for the break away in what appears to be every 15 seconds. Then the confusion sets in as the race radio states that several riders are in both a four man break and in the chase group. This Houdini-like feat of being in two places at the same time is discussed in some detail until we reach the second KOM of the day, where the road narrowed to not much wider than one lane.

If the ascents up were sketchy, it was nothing compared with the descent. All intentions I had to carry on a conversation with the guys quickly went out the window when Burke attacked the descent following the KOM in such a way that you thought he was going for Strava points. I alternated between trying to stabilize my stomach and trying not to pay attention to the tires screeching on the turns, or to the young boy who pointed out that our side tires came off the ground.

I was finally able to open my eyes long enough to witness a scuffle between the team cars of Exergy and Optimum-Kelly Benefit. In what can only be described as a vehicle-based shoving match, the two team cars went after each other to the point of nearly taking out Ian Boswell (Bontrager-Livestrong). The two team cars eventually stopped where the drivers continued the verbal assault on each other on foot.

By the time we reached the bottom of the descent, the radio car called us up for a feed. The problem was that the race, and more importantly the placement of the team cars looked more like a battle zone than an organized bike race. While there were only 2 lanes for traffic, the cars were arranged sometimes 4 wide. At this point, my whole job was to keep my cool and not completely losing my nerve. Cars and riders alike were weaving in and out of traffic under quick speeds with no sign of a brake light in sight. I repeatedly flashed back to my first Cat. 5 criterium and the thought that in any minute there would be a number of wrecks around us.

We finally reached the Snow Bird climb where all bets were off. As the boys of Garmin-Sharp and Radioshack battled it out for control of the peloton, our sites were focused on Chris’ performance. On our way up the mountain it appeared as if someone read our minds because he had a whole pizza pie for us on the road.

After graciously indulging our selves it was time to peal off the course and let Chris run his race. He finished 17th on the day which secured him a top 20 placing in the Tour of Utah. Based on the results it appeared that Ed was happy with team’s performance. 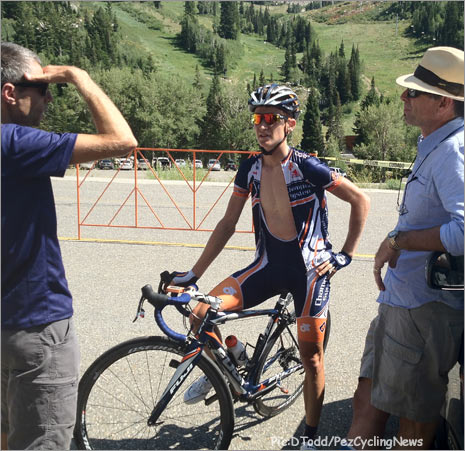 After seeing this teamwork together it is clear that the language and cultural barriers that might ordinarily divide a team have actually brought the riders closer together. Despite the adaptations each has to make to the culture of the other riders, the Champion System team continues to build on its previous success on the road. Chris was able to carry over his success on stage 5 to the final day and securing an overall placing at the Tour of Utah within the top 20.

The Champion System team appears to be succeeding with the same international model that has made its title sponsor so successful. It will be fun to watch them this week in Colorado.

• Get more info at the Team Champion System website

Toolbox: Things To Think About