Race Report: As usual the Men’s Under 23 road race was an exciting affair of continual attack and chase, the big problem was that no riders were allowed any substantial lead. The race came down to the last climb of the Cauberg, but it was all together for the sprint and the camera was needed to split the medals.

Yesterday (Friday) Britain’s Lucy Garner won her second World Junior woman’s road race in a row. She was the GB team leader and the plan worked out perfectly with Junior World time trial champion; Elinor Barker taking her to the line in perfect fashion after 5 laps of the circuit covering 81 kilometres. After the finish, Lucy commented; “I built up the course a bit and maybe thought it would be tougher than it actually was. There were small groups pushing hard over the top of Cauberg, not just on the way up it, but the most important thing was to position yourself well.” 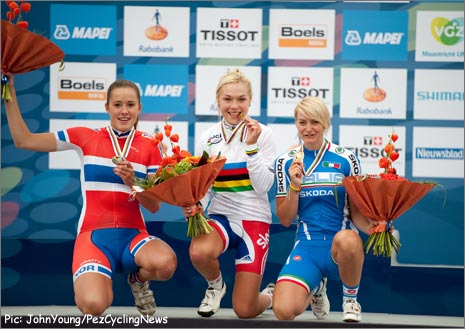 The Under 23 Men’s World road race is over 177.1 kilometres on a circuit from Valkenburg towards Maastricht then back over the climb of the Bemelerberg to complete the lap back at Valkenberg with the Cauberg climb.

Most riders were wearing their arm warmers for the first few laps as the temperature was a little nippy, but dry. As would be expected the Belgian, French and Italian teams controlled the early laps, the Dutch, Germans and Norwegian jerseys were also massed at the front. 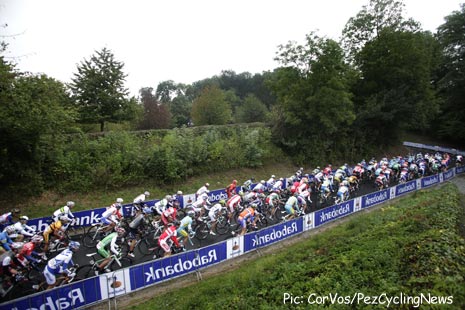 Under the tree’s on the Bemelerberg

Up the Bemelerberg and the Slovenian; Stimulak made the first real attack, he was joined by three others, this came to nothing over the top, but he pushed on, soloing down the other side. A chase group of Frieberg (Australia), Dahlstrom (Sweden) and Kinoshita (Japan) went after him and passed him before the Cauberg. Stimulak carried on between break and bunch with some help from a Russian, but they didn’t stay out front for long.

The three pressed on as another chase group of eight formed behind up the Bemelerberg, they soon got together with the front three, but again the peloton lifted the speed to pull them back.

Top of the Cauberg again with 112.7 kilometres covered and the race was all together.

Australia, GB and Slovenia sat on the front of the bunch for a slight lull in the action allowing a few riders regain the field after a small crash.

Another attack came on the Cauberg, this time from Andersen of Denmark; he crossed the line after 128.8 kilometres with a lead of only 2 seconds from an animated peloton. Down the other side and yet again all were together, although the bunch had become smaller as the climbs were taking their toll on the weaker riders.

Waeytens of Belgium tried for a solo with less than three laps remaining, he was caught on the Bemelerberg by about six riders, this was all for nothing as the peloton were on their wheels and again the race was all together.

Two riders attacked before the end of the lap, but they again were caught on the Cauberg which launched yet another group away, they were led across the line with two to go, by Kenneth Van Bilsen (Belgium) with only seconds in hand.

Two laps to go (32.2 kilometres) and a bunch sprint was looking more and more likely as no rider or group of riders were able to sustain any sort of lead. Andrea Fedi (Italy) and Lukas Postlberger (Austria) were next to try their luck and managed to stay away over the Bemelerberg.

They were caught by Eduardo Sepulveda (Argentina), Anton Vorobyev (Russia) and Pawel Bernas (Poland). Into the last lap and the lead was 18 seconds with Britain’s Edmondson pulling the bunch. Philip Laverty of Ireland put in a jump to cross to the break that came to nothing as Kazakhstan had four riders on the front chasing everything down.

The Kazakh team closed the race down to the base of the Bemelerberg for the last time, up through the trees Denmark and Kazakhstan kept the tempo high even with attacks from Italian, Dutch, Australia and Austrian riders. 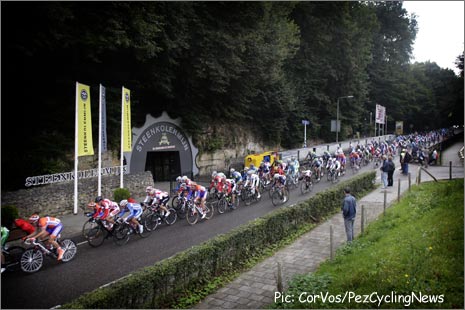 Every country was represented at the front of the peloton, all waiting for the Cauberg and the final push to the line, round the last corner in Valkenberg, Austrian rider; Georg Preidler attacked and was joined by McCarthy (Australia) and then all the others.

Last kilometre and the sprint was set, a Latvian jumped but was soon swamped, Van Bilsen of Belgium came to the front to for Tom Van Asbroeck, Alexey Lusenko (Kazakhstan), Hugo Houle (Canada) and Bryan Coquard (France) came through and spread across the road on the finish line, the decision had to go to a photo finish to split the winners.

In the end it went to Alexey Lutsenko of Kazakhstan from Bryan Coquard of France and Tom Van Asbroeck of Belgium in third, the Canadian; Hugo Houle was so close to a medal, but had to be satisfied with fourth. 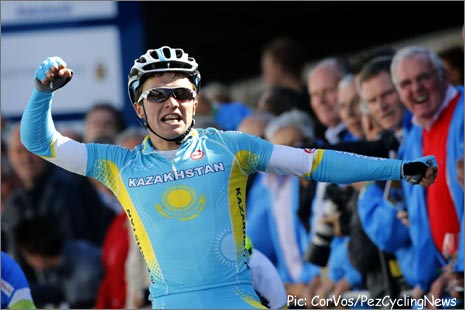 Alexey knew he had won!