Race report: The crowd goes mental as the winner’s name is announced, the drunken songs have already started. The man himself stuffs his arms down the sleeves and prepares to pull the fabled rainbow jersey over his head. He whispers disbelievingly to the presentation party … “I’ve been dreaming about this my whole life.” Who is the lucky man? Read on!

Earlier … in the Worlds road race: a flurry of Teflon attacks just don’t get any purchase. Among the triers are Lindeman (Belgium), Roy (France), de Kort (Netherlands) and Isaichiev (Russia). Oscar Friere (Spain) and Dan Martin (Ireland) have a tumble, but are both back up and racing.

The Dutch have been fired up, racing at home and having watched Marianne Vos destroy her rivals in the Women’s race yesterday. The last time the Worlds were in Valkenburg, it was Switzerland, Belgium and Italy on the podium, so the Dutch will want to fix that.

There are a lot of wearing little climbs on the first half of the menu – about 100 kilometers through the countryside of southern Holland. One after the other come the slopes: the Maasberg (500m at 4.4%) is followed by the Adsteeg (500m at 5.4%).

The race then hits Valkenburg and faces the leg-sapping Cauberg (1200m to 5.8%) a total of eleven times. Lurking out on the 16.5km circuit which will be tackled ten times is the awkward, potentially decisive Bemelerberg (900m at 5%).

The finishing line is just over 1.5kms beyond the top of the Cauberg, which might alter the whole dynamic of the finish. Will a lone attacker get clear on the Cauberg and hang on? Or will a small group reform and it’ll be a Classics finish? Or will a sprinter survive to the line? Or …or …?

The new serious attackers are Ukraine’s Vitaliy Buts and Gatis Smukulis of Latvia. Maybe some of the crowd don’t even notice when they’re replaced, almost like a bad Eastern European spy thriller, by their respective compatriots Polivoda and Saramontins. The speed just ramps up and up and the field is streeeeetched. 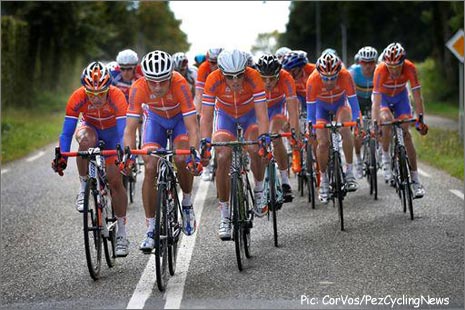 The Dutch did a lot of chasing early on.

The (surely) out-going world champ Mark Cavendish is working for his British mates at the head of the field. Still 200kms left!

The break goes out towards six minutes but the big nations peg it to five minutes as they hit Valkenburg and the Cauberg for the first time.

Inside half-distance, and Cavendish ends his spell as World Champion – he did the jersey and the race proud over the last twelve months, before dropping out.

A chase group has slipped the field and is cruising nicely.
Five laps (82.5kms) left and the escapees have about a minute on the chase, and a little over two minutes to the peloton. Contador ups the pace for Spain and Wiggins loses contact. Breschel (Denmark) abandons. The screw is quietly being turned.

The field is fluid, Contador’s move having pulled a large group clear, but it’s too dangerous and the peloton has to act. Wiggins, Phinney and Froome call it quits.

Approaching three laps (49.5kms) to go and there’s a huge pile-up. Just like yesterday’s women’s race, it has major repurcussions as the field splinters. A mini-peloton steams away from the wreckage. Netherlands have suffered big-time, caught on the wrong side of the crash. There are now about twenty guys clear and a chasing platoon of about sixty.

Behind, it’s still Niki Terpstra flying the home flag, battering away for all he’s worth. The British team is well represented in the peloton as Jerome Coppel is swept up.
Contador gets out of the saddle and drags the front group out into one long line. Voeckler tries to jump straight past. The Spaniard looks across quizzically at Britain’s Jonathan Tiernan-Locke as if to say: “… Who?”

It all starts to calm down as the field wheels across the line once again … Knees for Germany tows a small group about 25 seconds back.

Two laps to go: It’s about seventy together as we enter the business end of the race. The main field swishes past flags fluttering in the cross-wind, past freshly plucked fields and scatterings of fans applauding.

There’s a lull in proceedings as Belgium and Great Britain keep the tempo steady. Most of the top favorites are still here: Gilbert and Boonen for Belgium; Degenkolb (Germany); Friere and Contador (Spain); Voeckler (France); Sagan (Slovakia).

POP! Andrew Talansky for the USA rips it up the Bemeleberg and the Brits send Ian Stannard after him. Stannard’s not exactly tiny and he has to really hunch himself down to get any drafting from the smaller Talansky.

20kms left and Talansky/Stannard slip slightly further clear. As they hit the Cauberg, Stannard gets out of the saddle and blasts away from Talansky. He doesn’t
look like he’s going that fast but the favorites are having a job closing on him.

Bell lap! Dani Moreno (Spain) jumps as they approach the line for the penultimate pass. Voeckler (France) and Van Avermaet (Belgium) are there, and a group at three seconds. Another group at twenty seconds or thereabouts.

Germany try to shut things down. Belgium and Spain have six guys each in the front group. Too many chiefs? Jurgen Roelandts gives Boonen a little push at the back of the leading pack. Tom swigs down a bidon, gets his breath back.

Sammy Sanchez for Spain drags things along on the Bemeleberg. Still a big group together but the fabric holding it together is wearing thin. Fifty guys up front; a second group at 27”. Now Contador at the front, followed by a line of Belgian blue.

Past the windmill and a last left-hander before the plunge down into Valkenburg. 5.5kms to go and it’s starting to bunch up again. Belgium, Great Britain, Germany, Spain, Australia all trying to get the front positions.

4kms left and it’s getting frenetic. Stannard stamps his pedals round for Great Britain, and now Italy hit the front.

Last time into Valkenburg and the Italians hit the foot of the Cauberg full-bore. Gilbert, Leukemans and Van Avermaet follow Nibali.

1.7kms left and Gilbert is ripping the gear round over the top of the Cauberg! Boasson Hagen hesitates … 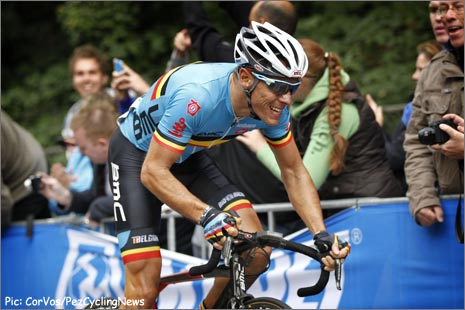 Now Valverde, Kolobnev and Boasson Hagen, but that trio are mucking about and Gilbert is gone! The front group is shattered!

500meters left and Gilbert knows he’s got it. Plenty time to look round and celebrate a gold medal and rainbow jersey. 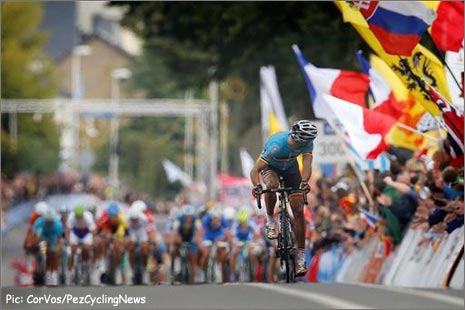 Boasson Hagen is clear for silver and Valverde hangs on for bronze.

There’s a Team Belgium love-in as Leukemans and GVA catch Gilbert after the line. He was a big favorite and he pulled it off in style. It’ll be pretty cool watching the world champion’s jersey in Amstel Gold, Fleche-Wallone and Liege-Bastogne-Liege next spring. Can’t wait! 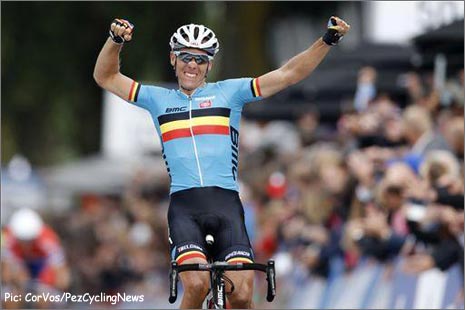 Keep it Pez for all the roadside reaction from Ed Hood.