The Espoirs or the ‘Future’ were racing today in the U/23 road race as the soon to be stars of our sport battled it out for rainbow glory. Ed Hood was down on the circuit amongst the teams and riders again to bring us another behind the scenes look at the Worlds – Roadside!

The Belgians are all in a coma at 07:30 as I head off to the press room, they were in full swing when Morpheus claimed me at around 10:00 pm. 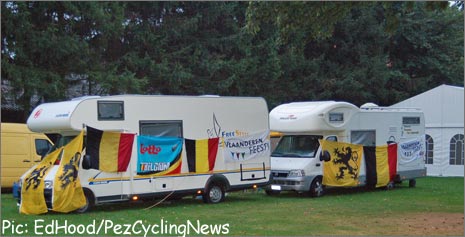 Every morning on my three kilometres to the press centre, I see a little more of Limburg life. 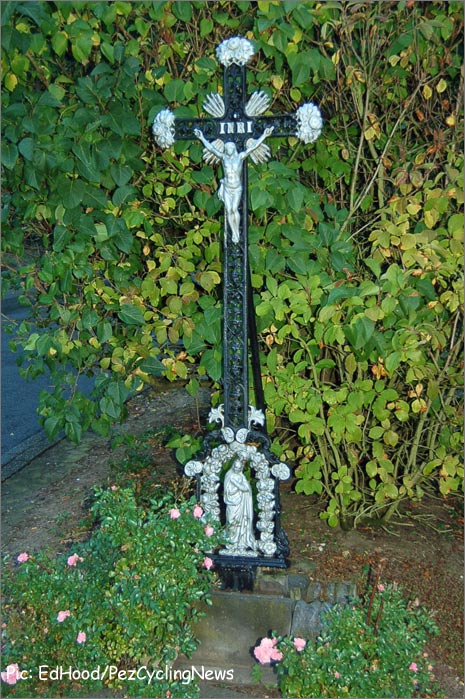 This province is predominantly catholic and there are beautifully tended little shrines all along the way.

And the wood stocks remind you that it gets damn cold here in the winter.

The papers are in up at the press centre. The Belgian press rather lost interest the last few days – ladies, time trials, juniors . . .

On five stars we have Gilbert and Valverde.

On four stars are Boonen, Gerrans, Sagan and Freire.

Then it’s time to go down to the start and see if we can get a few shots of the ‘names.’ 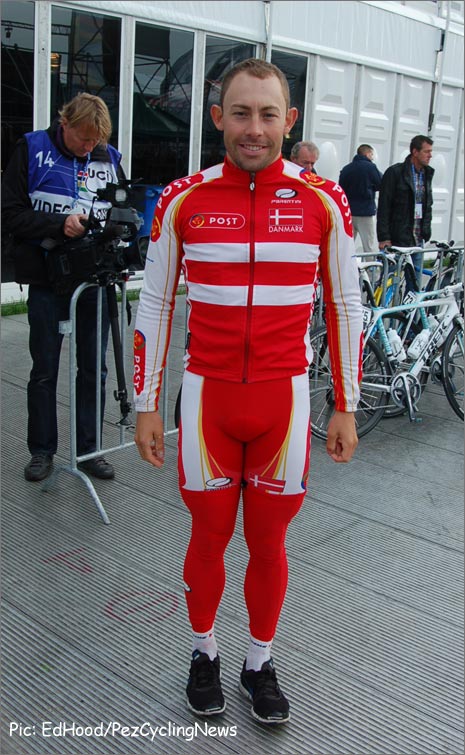 Sebastian Lander of Denmark beat all the big names to win his elite national championship on a foul day. 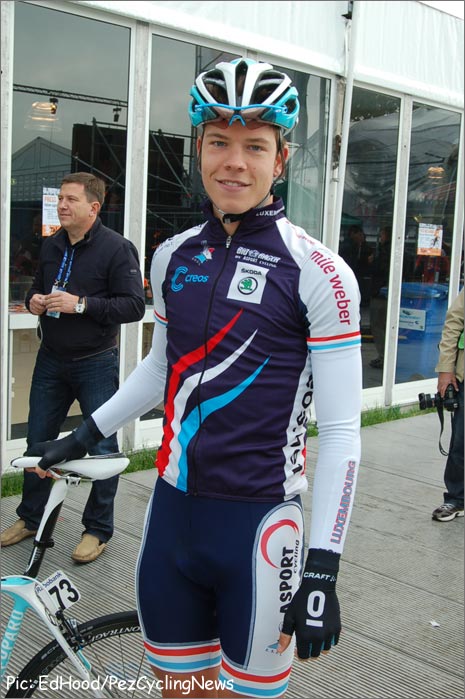 Bob Jungels is a former world junior time trial champion and this year he has won the Triptique de Monts et Chateaux, the Fleche du Sud and the U23 Paris-Roubaix. 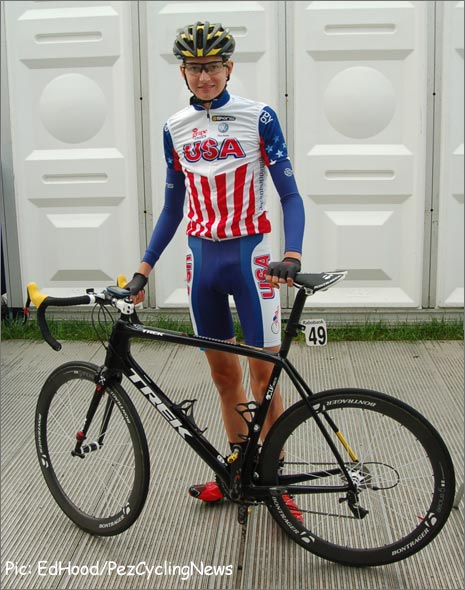 Baby Giro winner, Joe Dombrowski of the USA is here – he gets skinnier every time I see him. 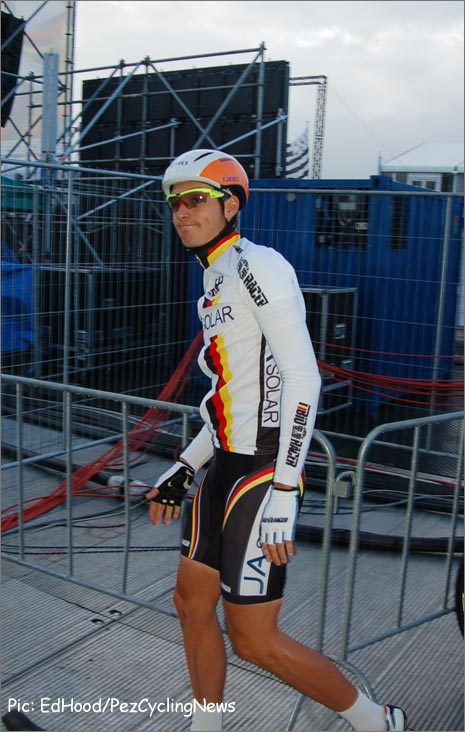 Rick Zabel, son of super sprinter Erik has been making a name for himself and it’s down to him for Germany if it’s a bunch finish. 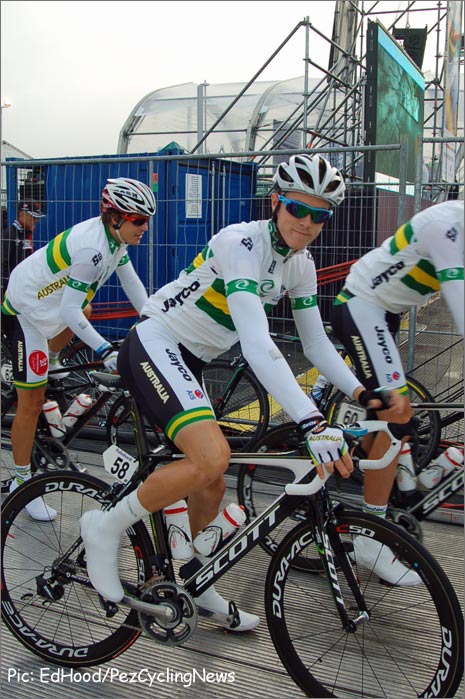 A commissare picks up Louis Mentjes of South Africa’s bike and whistles; ‘get the scales!’ 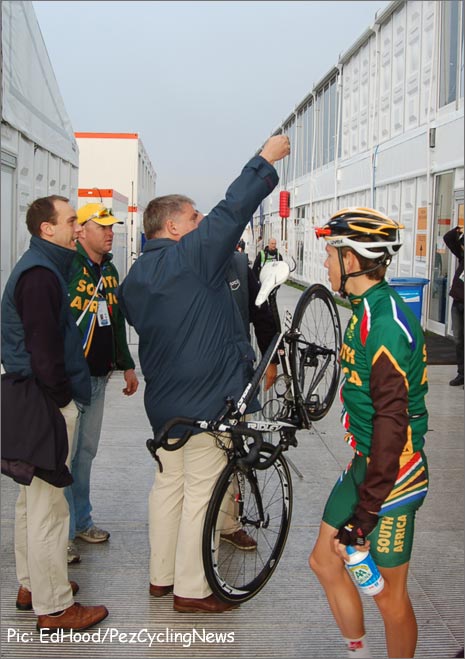 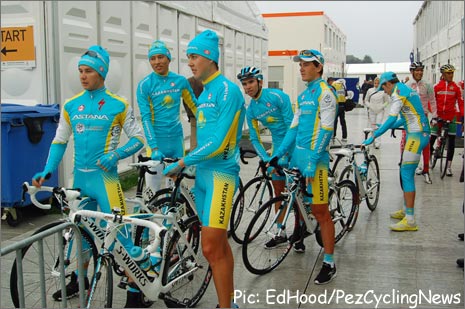 The Kazakh team arrives, looking mean, with Alexey Lutsenko at the head of things – a sign, if ever there was one. 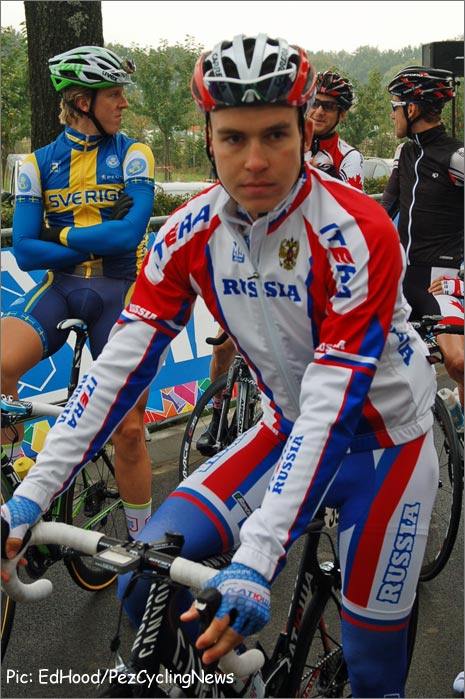 Down on the start line, Anton Vorobyev of Russia looks a lot more nervous than he did at his press conference after he won the U23 TT, the other day. 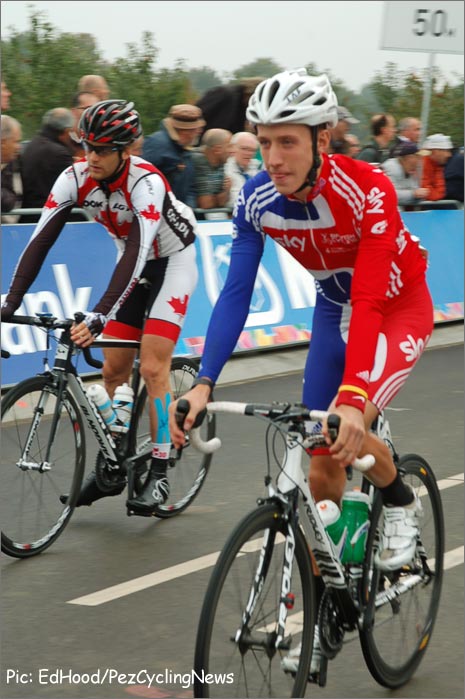 GB hopes are with Josh Edmonson who’s been riding well in Italia.

With the usual flourish of organised chaos, they’re off.

My plan is to walk as much of the circuit as I can, taking in the Bemelberg climb. 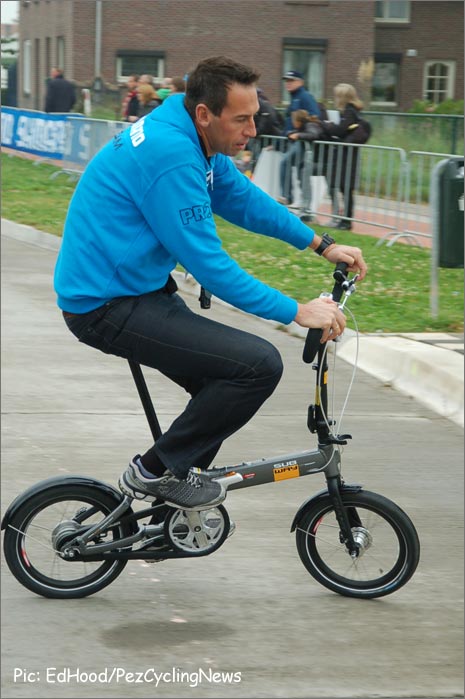 Big Bert Roesems works for Shimano these days, he was a multiple Belgian TT champion – but not on that bike! 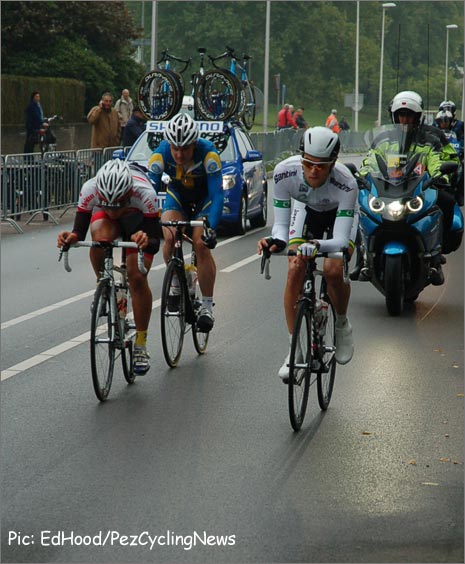 The race passes us for the first time in Berg; there are three clear, an Aussie, a Swede and Tomohiro Kinoshita of Japan; it’s cool at nine degrees.

They’re not drilling it and back in the peloton it’s relaxed, with a little buzz of chat.

It’s flat and into a cool drift of damp air before it starts to drop to skirt Maastricht, past apple orchards and maize fields.

The break passes for the second time just at the Mapei arch on the descent. 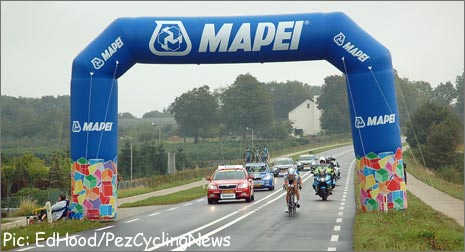 The Aussie is giving it some and his tyres ‘swish’ on the damp tar. 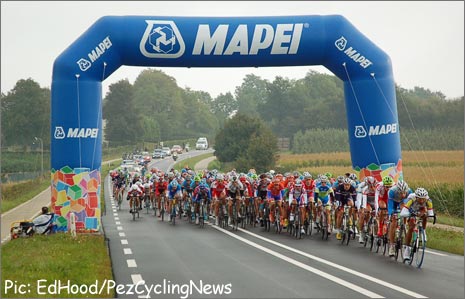 The temperature is up to 11 degrees with the gap at 3:20 as the peloton flies past.

I’ve chosen the wrong side of the road – some riders are taking a ‘comfort break.’

I check my shoes – missed me!

Dombrowski, Lander, Zabel and Tour de l’Avenir winner Barguil of France are all off the back – punctures? mechanicals?

The descent levels; over to the right, across the fields is Maastricht – the cows don’t seem too interested though and just keep munching that lush Limburg grass.

The third time they pass is just at the left hander on to the approach to the Bemelberg.

Jesper Dahlstrцm leads for Sweden, the Aussie is Michael Freiburg and with Kinoshita they’re working sweetly.

Our boys pass for the fourth time as the temperature goes up to 15 degrees – that hot embrocation will be stinging, now. And there’s a breeze stirring the leaves for the first time.

There’s still no urgency back in the peloton and the watch says 7:30. A nice move by the Aussies; someone has to bring that back. 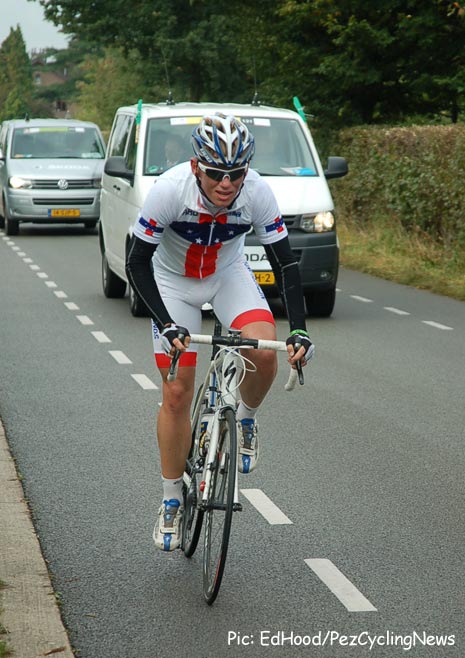 One of the Netherlands Antilles guys has lost contact – there are no ‘bergs’ in the Caribbean.

And on the subject – it drags up into Bemelen as the Swede leads the break past on their fifth ronde. 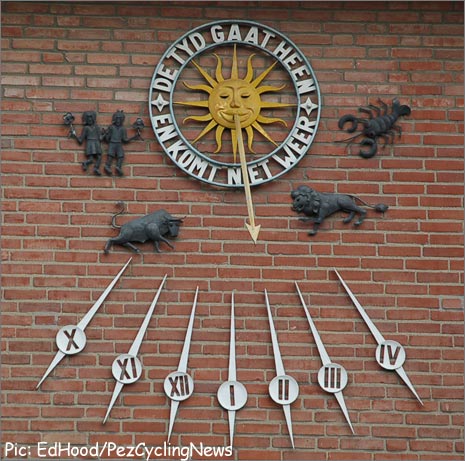 There’s a neat sundial in Bemelen – will we need that to time the gap? 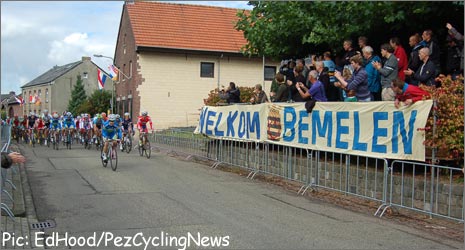 You’re not allowed on the lower part of the Bemelberg – it’s too narrow with the banks rising straight up from the road.

A detour through the fields gets my feet wet, again.

Much of the circuit is horrible to walk, muddy and jammed behind barriers – a bar would definitely be a good option for race watching.

The Bemelberg isn’t as tough as the Cauberg but it’s a sore one – twisting up through the trees.

The break is on borrowed time, with the gap under a minute.

They’re frisky in the pack and there’s a split, led by Kiwi, Joshua Atkins. 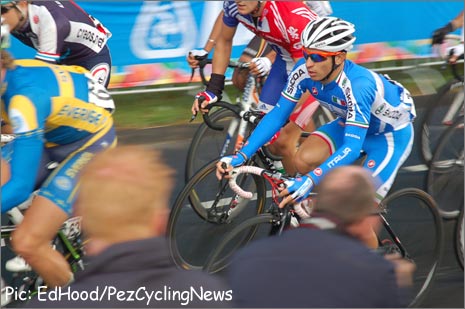 But there’s not much daylight back to a strung out bunch where the Italians look ominously comfortable.

Sun dry Malaysians and Mexicans bring up the rear as the Bemel gives way to nasty, painful false flat with open fields to the right. 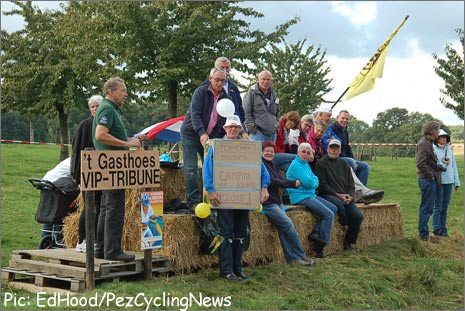 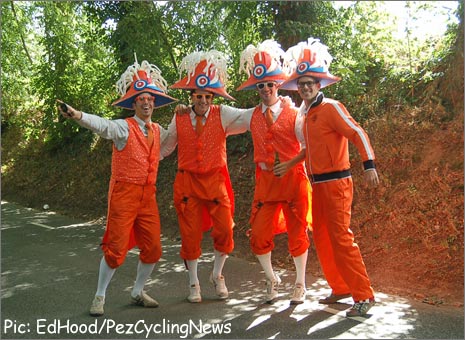 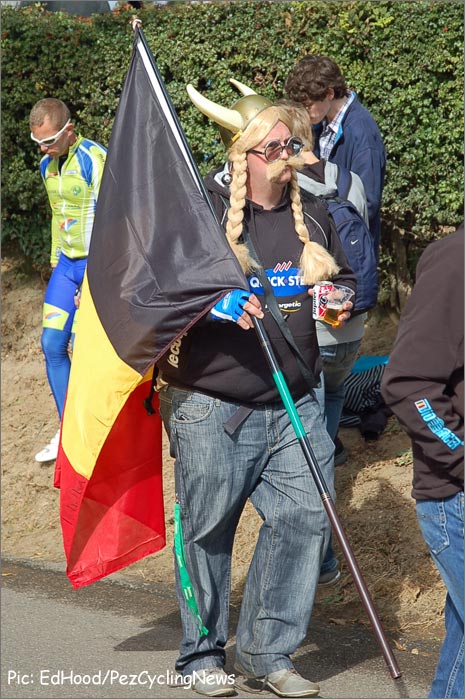 And of course there’s the ‘should get out of the house more’ brigade . . .

Our seventh sitting of the race is outside our campsite; it’s compatto and relaxed.

Burger time at our campsite- it would actually be a good spot to hole up at to watch the race; especially now that the sun is out and it’s a lovely Limburg afternoon.

I have my own race, across the circuit to the start/finish; I wouldn’t have enough time to walk the whole circuit so I’m taking my morning and evening ‘stroll’ route across to the other side of the parcours.

I’ll walk the other way, tomorrow for the elites.

The sound of helicopter blades up ahead tells me I’ve missed my eighth sighting – the old legs are getting a bit stiff, that’s maybe 12 K on foot, today.

At the line, the car parks are filling as the ViP’s stream in.

The bridge across the parcours has become a poor man’s grandstand.

I can see the choppers now, on the other side of the circuit.

Kris is in the stand, with a TV monitor and keeps me right – five are clear. 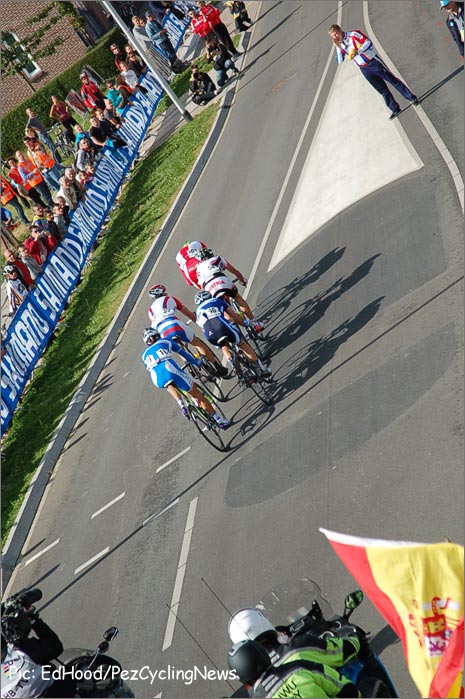 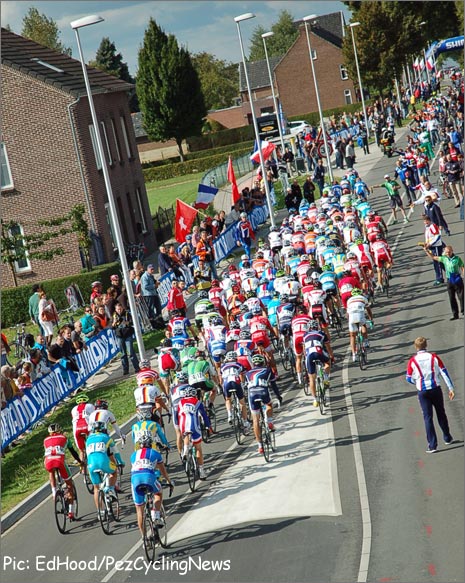 I get my pictures off the bridge, the five are still just clear with an arrowhead in hot pursuit.

But by the time I get to the grandstand and the TV monitors, it looks all over for the break.

And it’s ‘finis’ – on the approach to the Bemmel.

There’s no selection on the climb and despite an Aussie going clear, it’s all saying ‘bunch sprint’ to me.

There are flurries on the Cauberg but it’s a mass charge – at the end there would be 97 riders within 30 seconds of the winner. 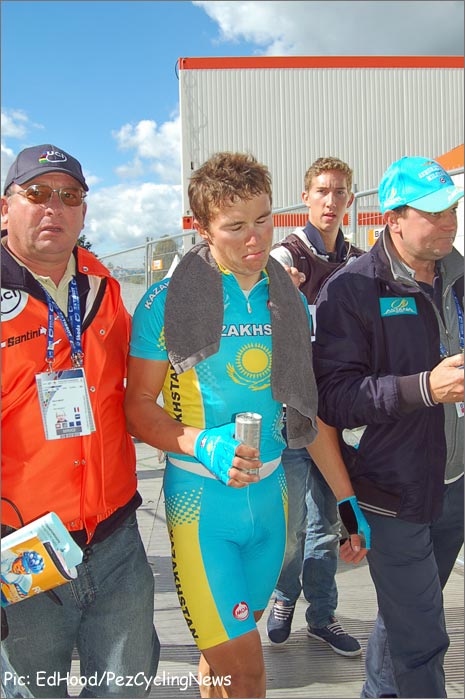 Lutsenko can’t believe he’s won and there are tears among the joy and exhaustion.

I can just hear Vino now; ‘I am Olympic champion and now Alexey is Espoirs champion; Kazakhstan number one cycling nation!’ 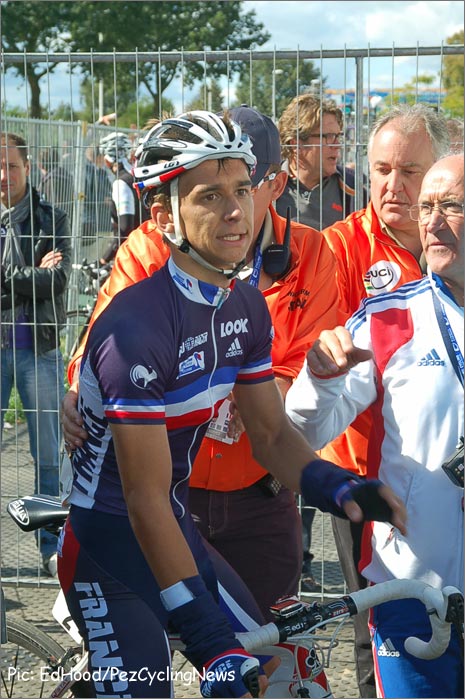 You can see that Coquard wanted the win, no smiles from him; a world title would have gotten him a better pro contract. 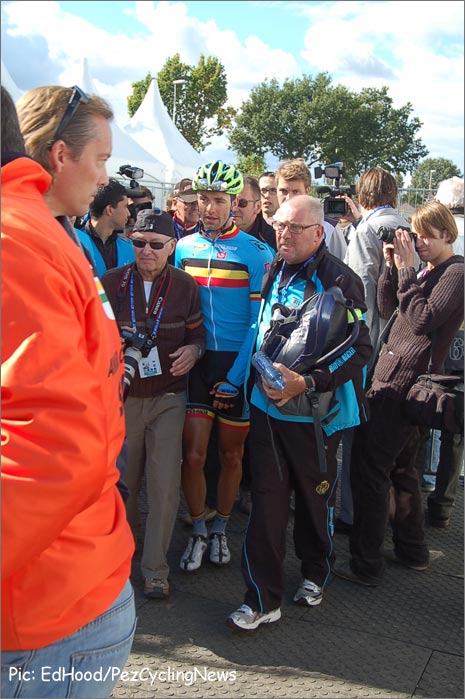 The same applies to Van Asbroeck; ‘third, it’s not so good, eh?’ And whilst I am aware that the elites face another 100 kilometres on top of the U23 10 laps, tomorrow – the course isn’t as selective as folks think.

I’ve walked all of it now and whilst the Cauberg is a brute, the Bemel isn’t that bad. And the thing is that from the top of the Cauberg to the foot of the Bemel, the parcours are either flat or downhill with excellent surfaces.

Any gap fought clear on the Cauberg will be very hard to consolidate. It’s much more open than we’re all thinking. I can’t wait!