Worlds de PEZ: Close Up On The Cauberg!

With the result of the team time trial coming down to OmegaPharma’s ability to smoothly ride up the Cauberg and BMC’s ability to explode we thought it was time to take a closer look at this crucial part of the World’s circuit. Our man on the scene, Ed Hood laced up the trainers and hit the road to examine this mythical climb.

As I sit and bang out words in the press centre, Kris is battling through the Monday morning traffic down from Denmark and across Germany. 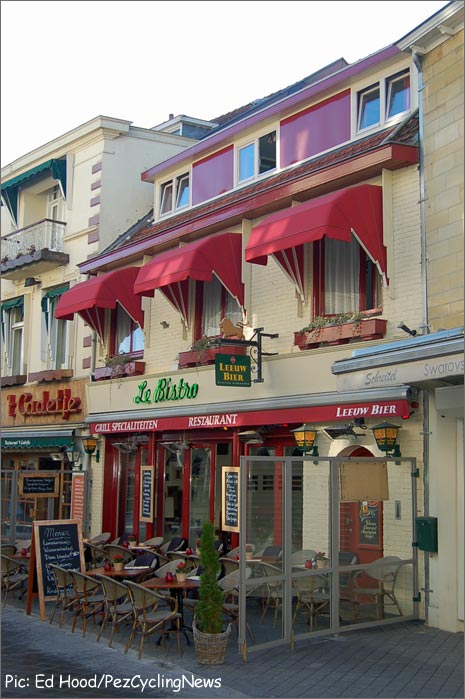 I’ll miss Le Bistro in Grotestraat, it was clean, the staff were nice and the wi-fi was good. This morning was my fourth ascent of the Cauberg – on foot, of course – and it doesn’t get any easier.

It’s hard to imagine that when the late, great Briek Schotte won the Worlds here in 1948, the parcours was 26 laps of a 10.2 K circuit which included the Cauberg – men were men! 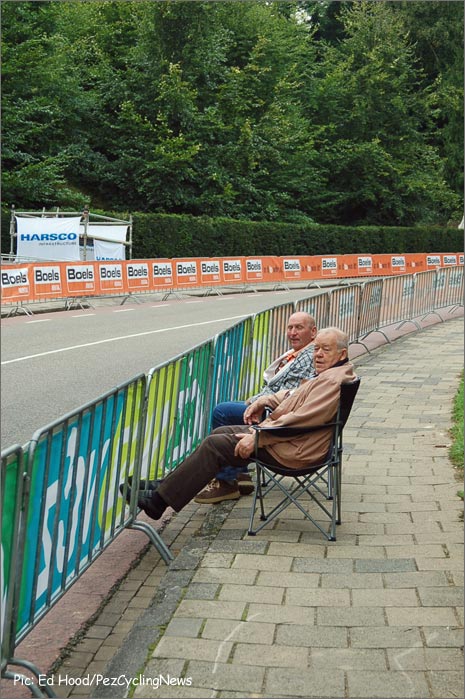 Despite the fact that it’s ‘only’ the junior time trial this morning, the ‘hard core’ have already grabbed their spots. 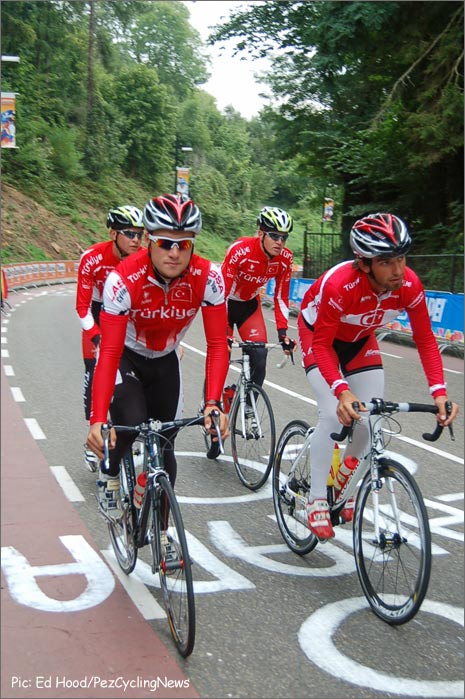 As I puffed up the grade, the Turkish U23 team appeared, trying out the Cauberg for the first time – they didn’t look impressed. 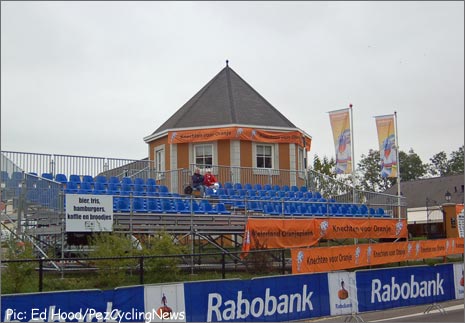 Today is the only free day in the tribune up at the casino and some folks were making sure they had their spot – early. 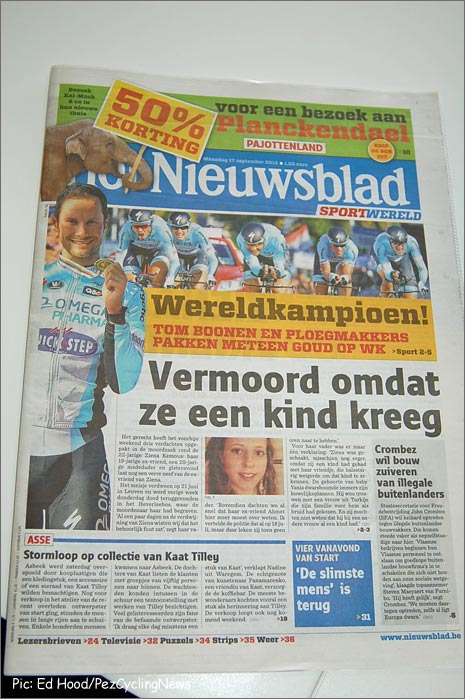 Up at the press centre there are free copies of the Flemish Het Nieuwsblad paper – the one that sponsors the race, yes – and Tomeke dominates the front cover; with the rest of team as a bit of an afterthought.

Today we’re going to take a closer look at the geographic feature which dominates these championships – the Cauberg. 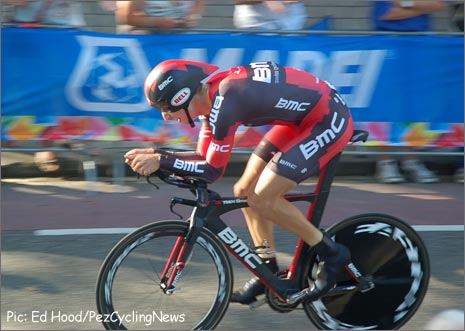 It made the difference between gold and silver for BMC on Sunday –just ask Taylor Phinney. 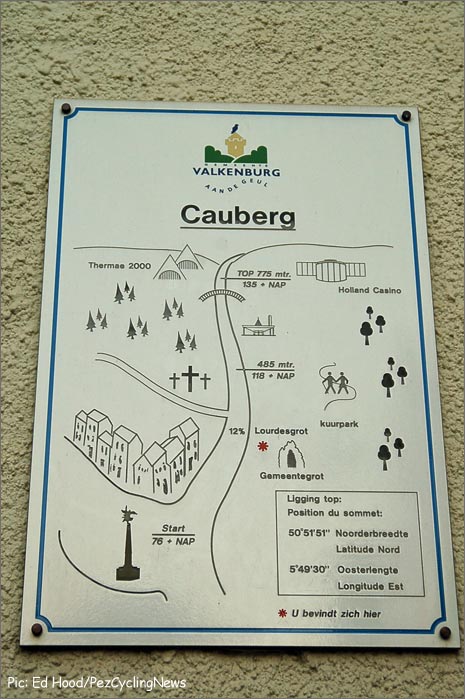 I took time early on Sunday morning, before it went crazy and there were fans, cops, stewards and cyclists everywhere, to take a look at this stretch of road which it’s fair to call ‘legendary.’ 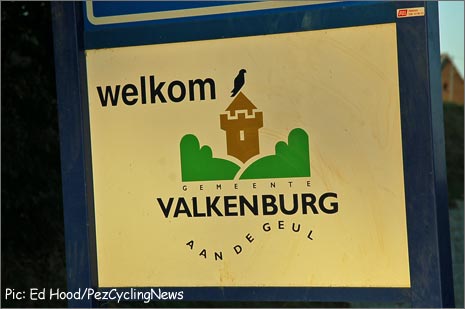 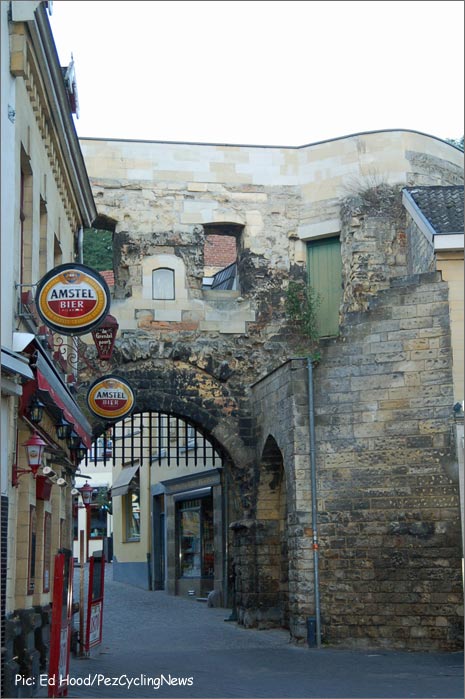 History sits beside hedonism in Valkenburg where the consumption of beer is heading towards Gent Six Day levels. 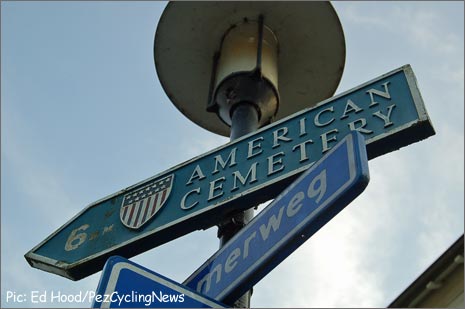 At the junction at the bottom of the climb, there’s a reminder that things weren’t always so carefree in this corner of Europe. Some six kilometres away is the American War cemetery where some 8,000 US servicemen rest in peace – fallen in the bitter battles fought in this area in 1944/45. 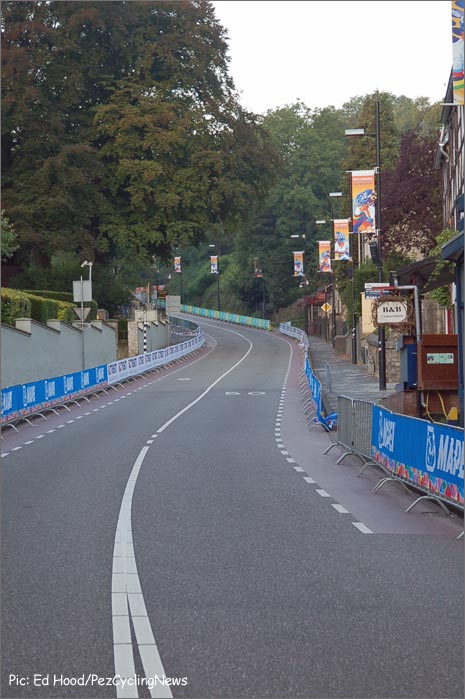 The climb rears immediately, away from the bars and restaurants, up through the trees, the surface is decent but the grade is steep 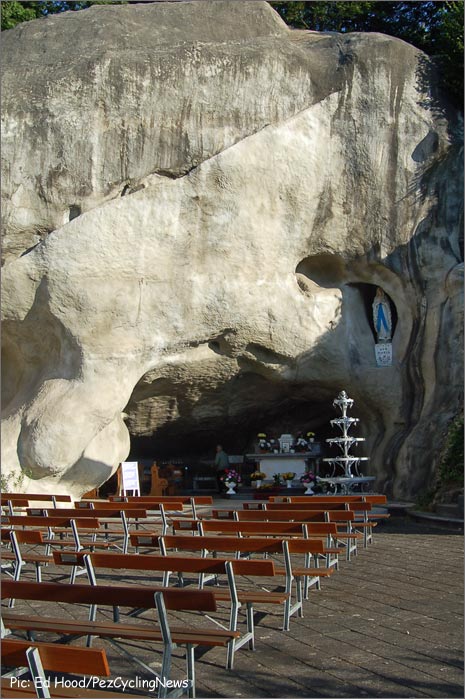 Not far from the bottom of the climb, on the right hand side is the ‘Lourdesgrot’ a replica of the grotto in Lourdes. It’s a place of worship and a million miles from the beer and brass bands of Valkenburg just yards away. 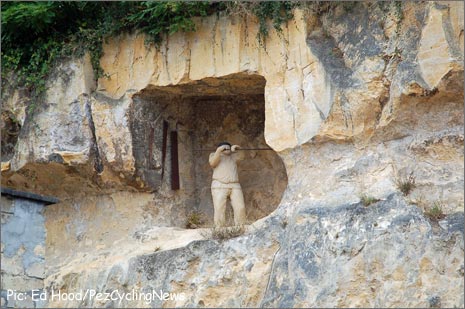 The rock in these parts is soft and there are cave networks, which the US servicemen used during WW11 to seek shelter from the brutal winter weather. 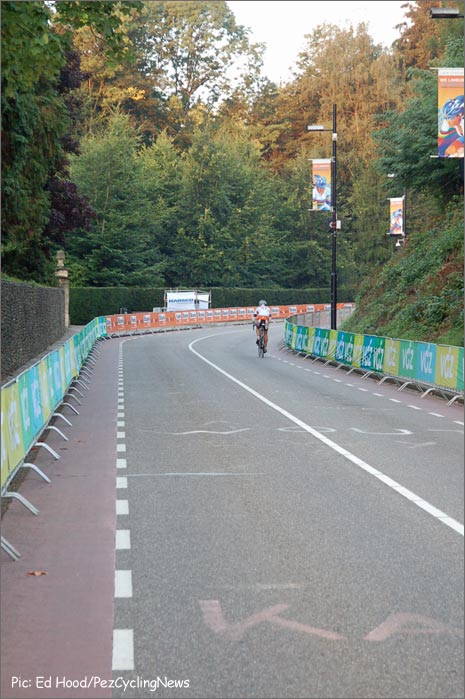 The road drifts right past the cemetery and on the pavement the names of previous champions are commemorated in iron. 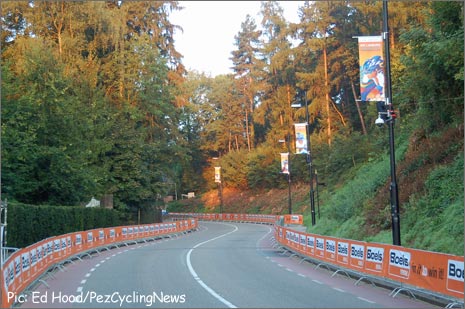 Past the right hander are the ‘S’ bends where the strong clip the apexes and the weak go the long way round. 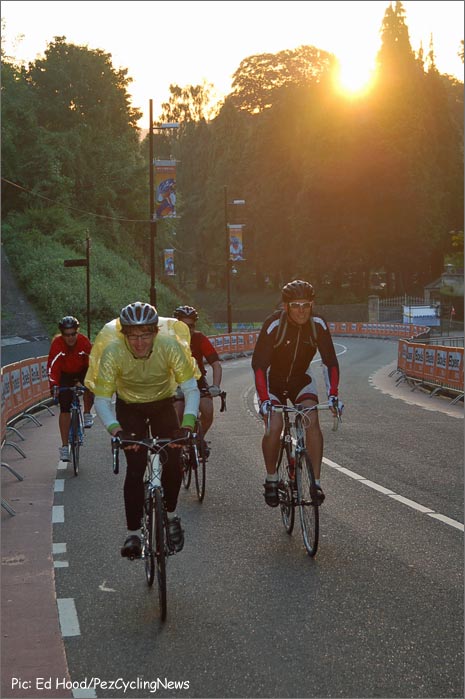 As the sun began to break through the trees, a group of cycle tourists were pitting themselves against the beast; they’ll be able to tell their club mates; ‘it’s not so tough!’ 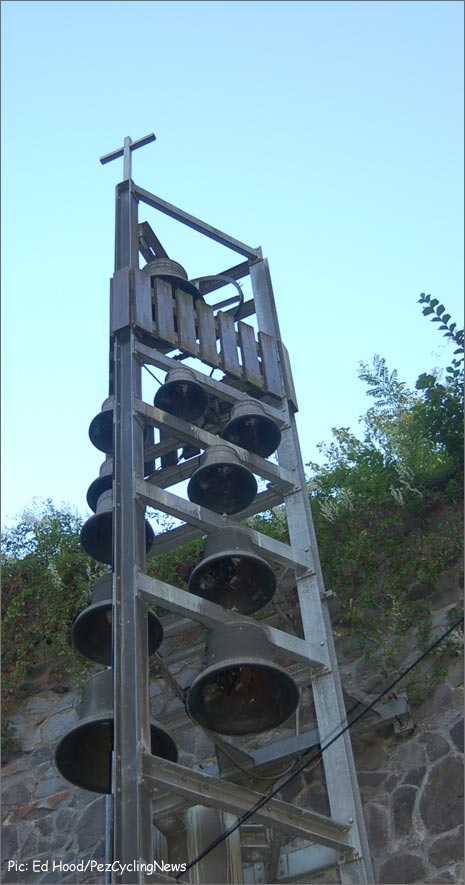 Just past the ‘S’ bends is a memorial to those from Valkenburg who fell during WW11, it sits back off the road and is easy to miss – there are an awful lot of names on those walls. 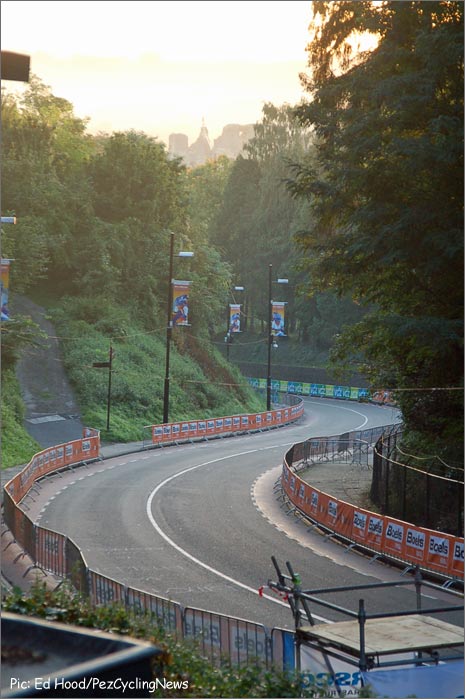 The area outside gives a good view back down through the ‘S’ bends and the impression of how steep they really are. 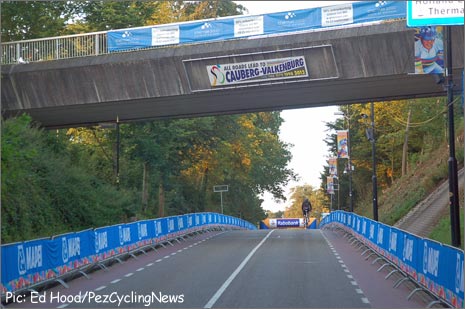 The bridge across the road comes just before the two kilometres to go board and marks the point where the grade begins to ease – but that just means the strongmen go faster. 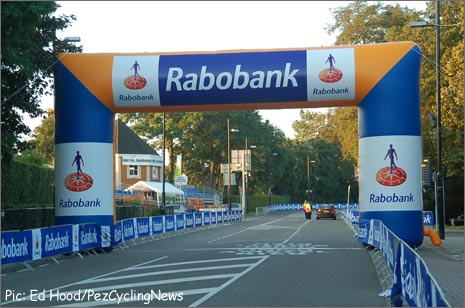 The next landmark is the casino where the big Rabobank arch is – it’s not a proper bike race in The Netherlands if Rabobank aren’t involved. The teams recent change of management structure is big news here and ‘the guy in a bar’ who strikes up conversation with you, can tell you that Erik Breukink was too nice a man to be a manager and they need tougher management if they want to achieve the results that their budget merits. 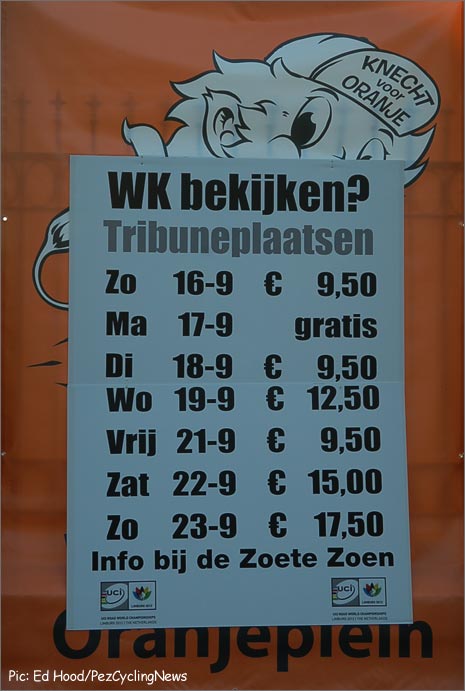 There’s a grandstand nearby; however it costs to get in – Euros 17.50 for the elite road race, but you can sit there for free during the junior and U23 time trials. 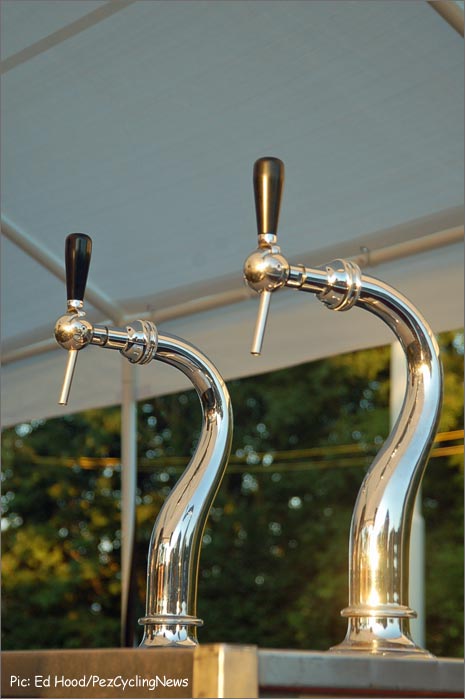 But the good thing about being in the tribunes is that you’re close to the bar – and those fonts are sparkling and ready. 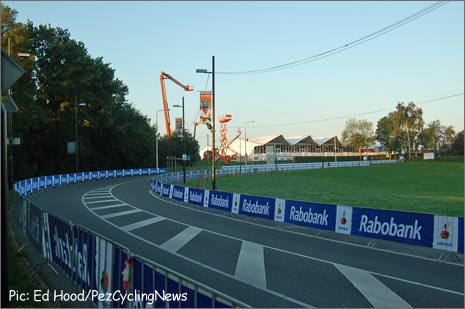 Cruelly, the road drags again, not steep, but enough to put a rider on the limit into the red, especially if the wind is in the wrong direction. 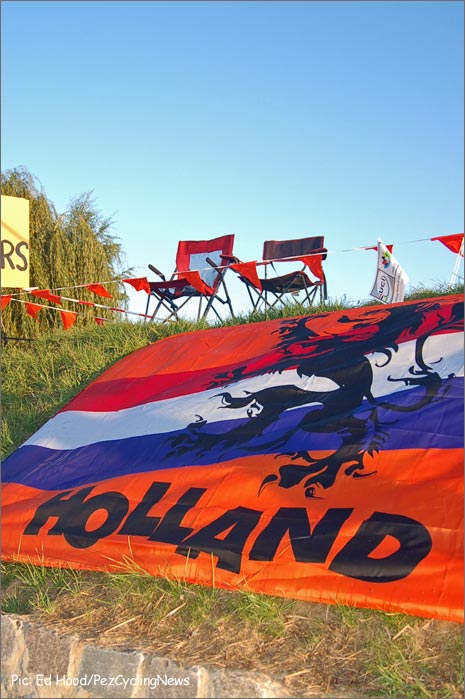 This is prime territory for race watching, there won’t be the crush there’ll be on the Cauberg but this stretch could be just as crucial. 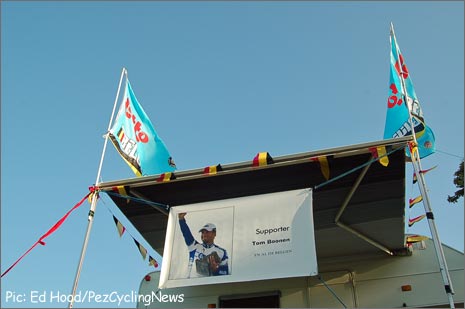 Chairs are already situated in prime spots and loyalties clearly proclaimed, with Boonen’s name in the vanguard.

And despite the fact that Amstel is the big beer in The Netherlands, Belgium’s number one brewery, Jupiler has the name well to the fore.

The good news is that the parcours drops to the red kite for a little then it’s pan flat, arrow straight and crazy fast to the line. I cheated a little with this picture, it was taken on Monday morning; they don’t put up race signs until as late as possible or the souvenir hunters would claim them. 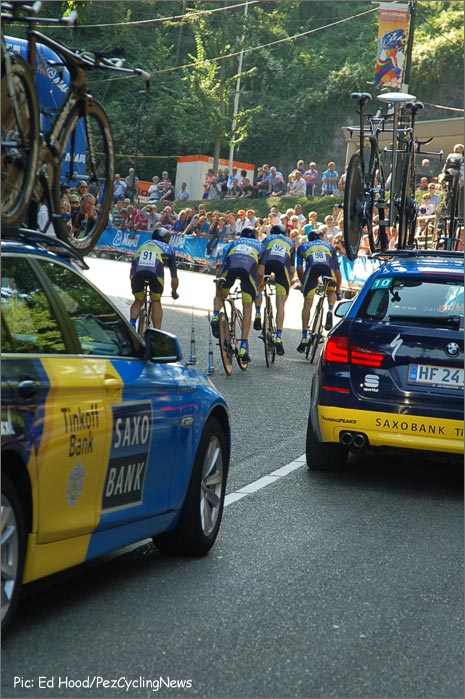 By Giro/Tour/Vuelta standards the Cauberg isn’t too long, it isn’t too steep, the surface isn’t bad and it’s wide – but it’s a hard, hard climb. Perhaps there’s a psychological element, the fact that it’s played such a pivotal role in so many big races?

But the way that teams were fighting to get over it in yesterday’s team time trial just reinforces the fact that the climb will again be the part of the parcours most mentioned in despatches come next Sunday.

Boonen is ready, we saw that yesterday, so is Gilbert, the Spaniards, Nibali and Sagan – it’s going to be a great Worlds – but whoever wins, they’ll have to conquer the Cauberg.