Worlds de Pez : On The Ground At The TTT!

From the pits with the mechanics to the suffering of the riders on the Cauberg and even into the bars, our own Ed Hood was there getting amongst it at the Team Time Trial in Limburg – Roadside!

It’s so close it’ll be decided on the Cauberg,’ said the commentator – he got that right. 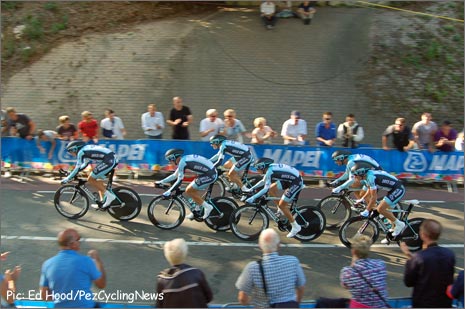 PEZ got two out of the three on the podium, we said BMC from GreenEDGE – but whilst we did mention Omega Pharma Quickstep in our preview, we didn’t have them down as winners. 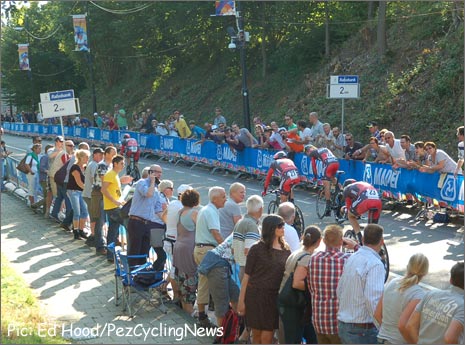 But win they did – and it was down to the Cauberg; BMC were in disarray at the two kilometres to go board whilst QuickStep were poetry in motion and still had six riders to BMC’s four. Although the gap was only three seconds at the line QuickStep looked like winners as they smooth pedalled the beast that is the Cauberg. 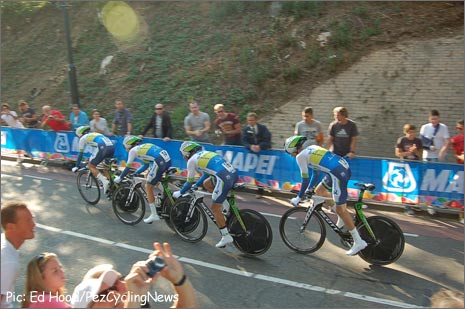 GreenEDGE took bronze from Liquigas, Rabobank and Movistar.
PEZ observed every one of the 32 teams which started – from a possible 50 – and here’s how our afternoon went. 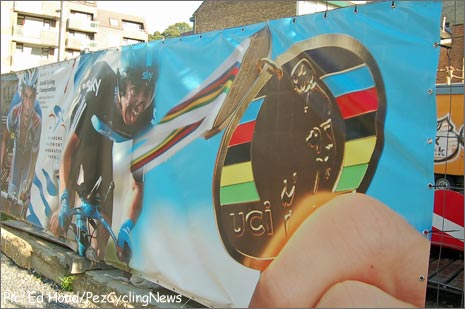 Valkenburg 14:25 and the pils is flowing under a perfect Limburg blue sky.

I’m just off the train back from the start at Sittard – it’s the quickest way to get around with all the road closures.

Sittard was quieter than I expected, empty streets and not the usual huge crush around the team buses – but Valkenburg isn’t quiet.

The race PA has to compete with a constant buzz of loud Amstel-fuelled chat and music pumping out of every bar on the street – and that’s a lot of bars. I went up to Sittard to get some pictures of the TT bikes for a feature we’ll be running later in the week.

The first man I met was our old friend from the six days, Dirk Dekeyser who works with Topsport Vlaanderen – Mercator during the road season. Topsport ride Eddy Merckx and their new TT machine has the ‘trick bits’ that you need to be different from the rest – including a ‘split’ down tube. 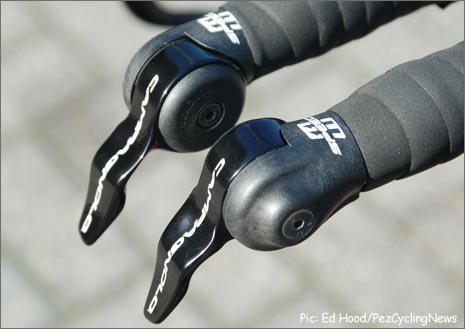 Dirk had a run in with the UCI technical guys because the bar end gear shifters were 3mm too long – that’s one eighth of an inch if you haven’t gone metric. Dirk got round it by turning them upside down. 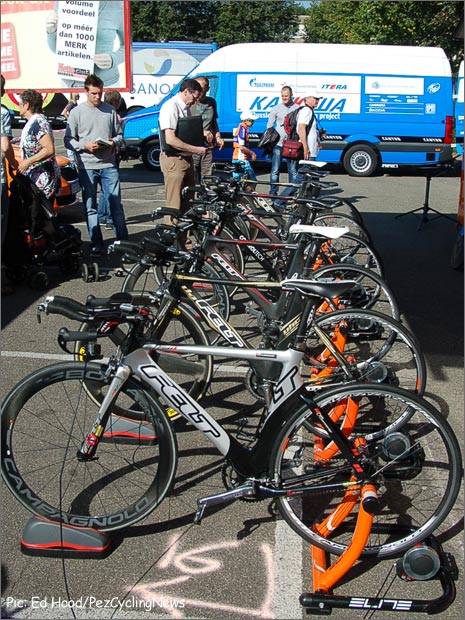 Over at CCC Polsat, there’s none of that colour coded, all the bikes the same stuff – the team rides whatever they have, with hardly two bikes the same. In the glossy mags and in pictures from folks like us, it all looks so glam – but step down a division and you’re in the real world. 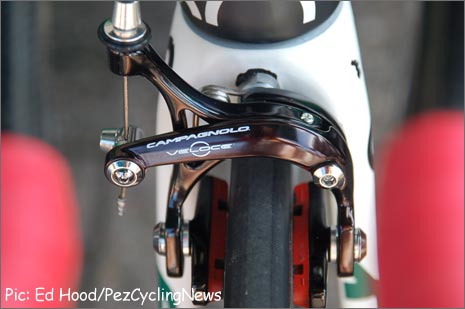 How about Campag ‘Veloce’ brakes on some of the Caja Rural time trial bikes? 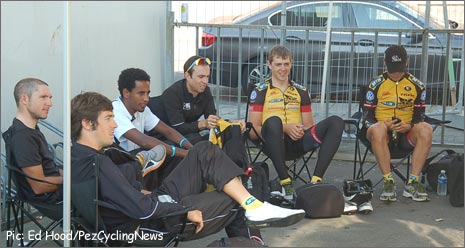 Team owner Douglas Ryder gave us an interview which you’ll see later in the week. 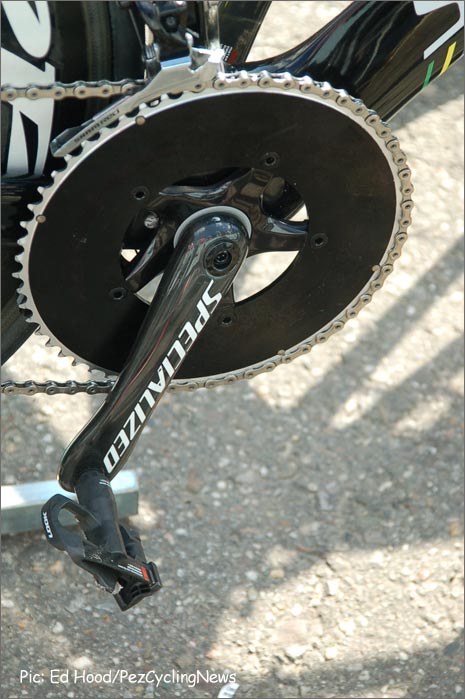 Meanwhile, over at QuickStep, Tony Martin has excelled himself in the chain ring stakes – we reckon 58, at least.

Pictures duly in the can it was time for that train back to Valkenburg. 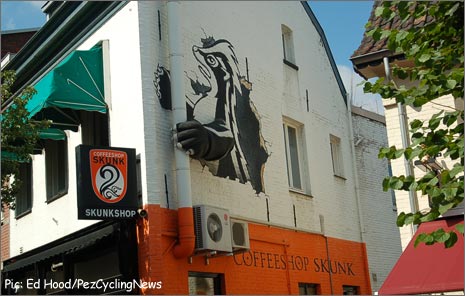 But I discovered why the place is so quiet, it’s that ‘Skunk Cafe’ – no, it’s not black and white furry animals they sell, but you may see a few if you sample their wares.

MTN were on us at the foot of the Cauberg before we knew it, looking smooth and not disgracing themselves with 23rd place, ahead of the likes of Lampre. Caja Rural – on their Veloce brakes – had Covadonga winner Piedra in the line up – no fears on the Cauberg for him, then.

Slovenian Continental squad Adria Mobil had to dodge a Caja Rural rider who’d lost his place in the line – there was a lot of that, this afternoon. 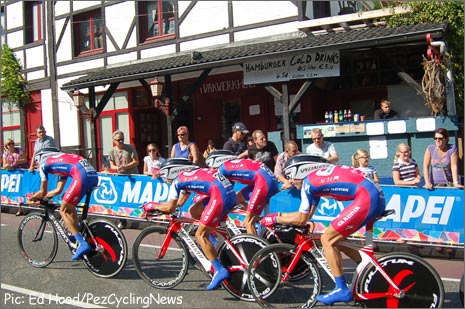 Despite what our picture shows, they had no time for a burger.

Polsat looked sharp, despite the mis-matched bikes, but not as neat as Russian outfit Itera – Katusha who were well up on the Poles. 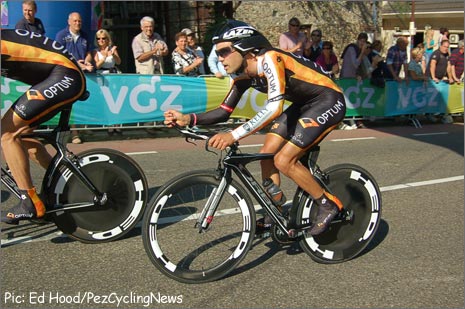 Kelly Benefits were down to four and risking gear changes on the steepest part of the Cauberg.

Saur were down to four too, but looking neat – more than can be said for Rabobank Continental, who had riders all over the hill.

Cofidis were tidy and Acqua Sapone were washing powder white – but creeping. 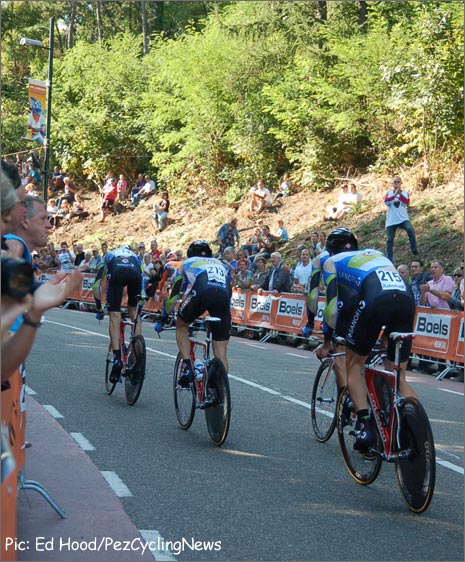 Team Type 1 weren’t neat, but they were getting up the thing. ‘A solid ride into 10th’ said our commentator – at this stage 11 teams had passed us.

Topsport were fighting the grade well, but it’s hard to tell how much the slots in the down tube had to do with that.

Euskaltel had the unusual experience for them of riding into the lead in a TTT – but their fifth and sixth men were well gone and in a state of distress on the climb, when they did appear.

Ag2r looked neat but F des J looked like Napoleon’s retreat from Moscow with big gaps and riders all over the place.

Meanwhile the commentator told us that Rabobank Pro Tour were ‘super schnell’ at the first time check. 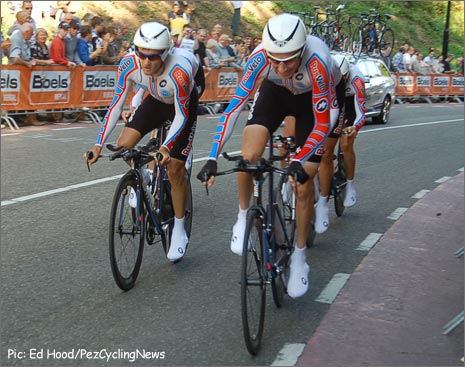 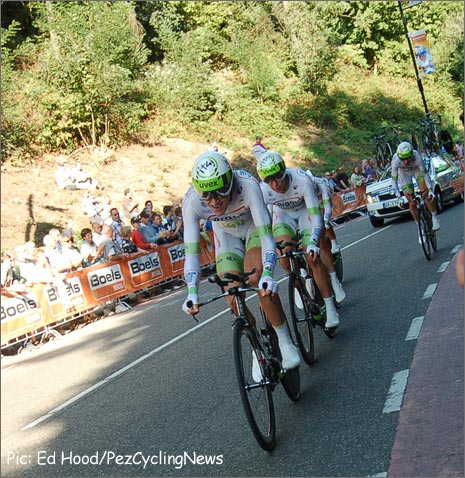 Rusvelo looked good, Argos were split and Lampre were ‘getting round’ as we say in Scotland – with plenty of looks back to make sure there were no splits.

Adam Hansen was dishing it out at the front for Lotto who were well up on Lampre. 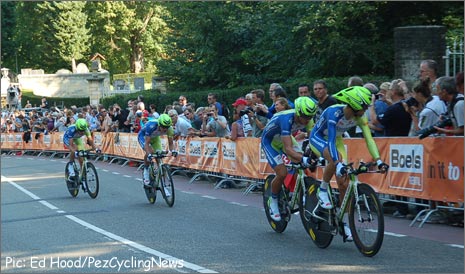 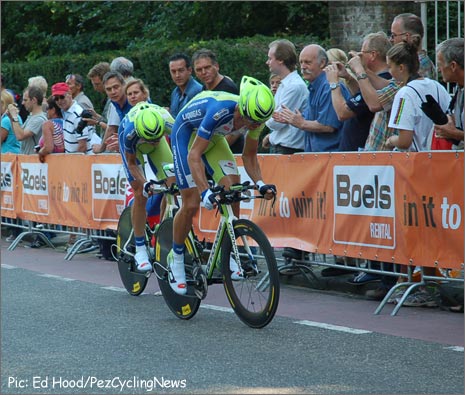 Liquigas were the first team on a real charge; Nibali leads three with two blasted and climbing all over their bikes to get back – little chance of that. 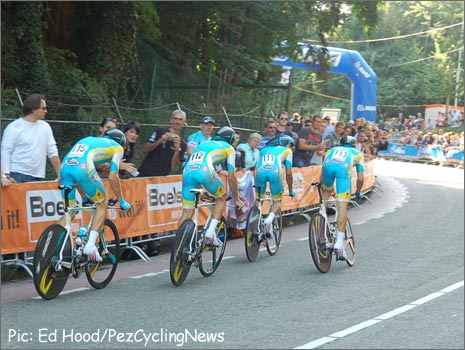 Four Astanas danced neatly up the slope with Vacansoleil next and their DS shouting over the team car PA; ‘you’re together!’ 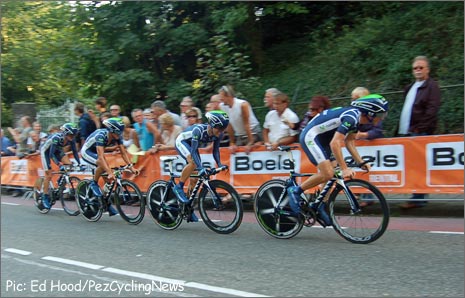 Saxo were down to four and weren’t in the hunt, Movistar looked like men on a mission and so did Katusha, attacking the climb hard. 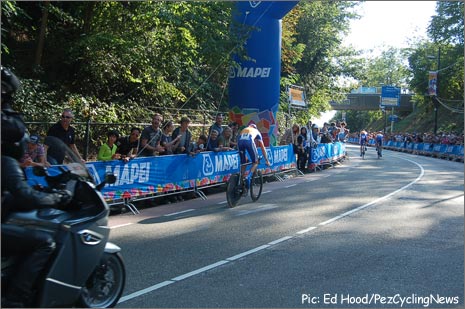 Rabobank were disastrous, split all over the hill.

The Shack were workmanlike but you could see that it wasn’t their day. 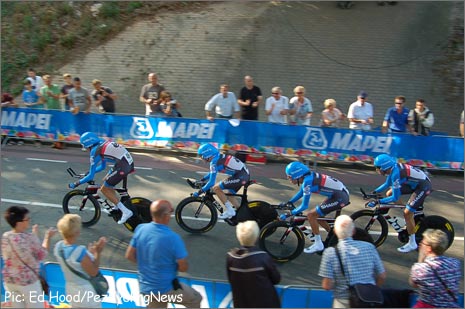 ‘That’s the job, right there, Jack!’ was the cry from the Garmin car as Jack Bauer dragged the boys in blue towards the summit – but 10th wasn’t a good day for the team who have made a science of this discipline.

And then QuickStep were upon us – beautiful to behold, together, smooth, efficient and looking like winners. It’s been an amazing season for the Belgian team and they could easily come out of these Worlds with two more champions in Martin and Boonen.

BMC must have made a huge effort over the top to get it back together – but it was silver for the US team.

Orica-GreenEDGE trained specifically for this race for three weeks – two weeks in Italy and one week on the parcours. To no avail – but a bronze in their first year of existence is hardly a disaster. 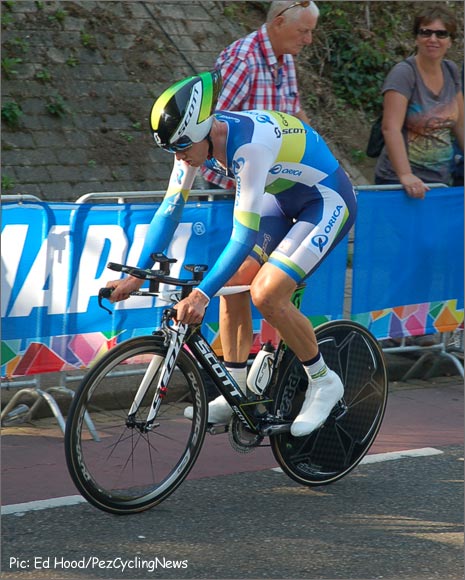 Jens Mouris had given his all and rode the Cauberg head down, wasted – but the job had been done.

Sky just weren’t in it – Ian Stannard must be exhausted after the work he’s done, this season.

And that was the first race of this year’s World Championships won and lost. 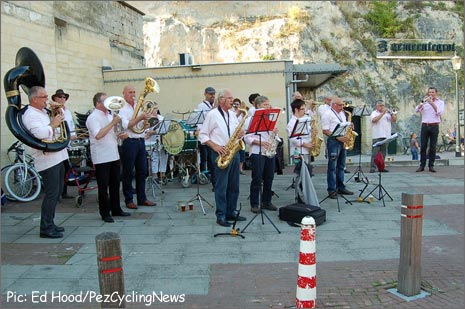 Meanwhile – down in Valkenburg the oom-pah band was just cranking up.

And I need a beer before this picture edit.

But last words to Tomeke; ‘I put this victory near my biggest, along with the Classics and the Road World Championship. I didn’t expect to win a race like this, first of all because it never existed before and in the past it wasn’t our discipline. We worked a lot and now we are there. It’s a team victory even for the staff. It’s really a change of mentality going on.”